I just started a new project. Crossing Slapz with several of my favorites. Here are a couple of the participants White Angel and Pure Michigan. 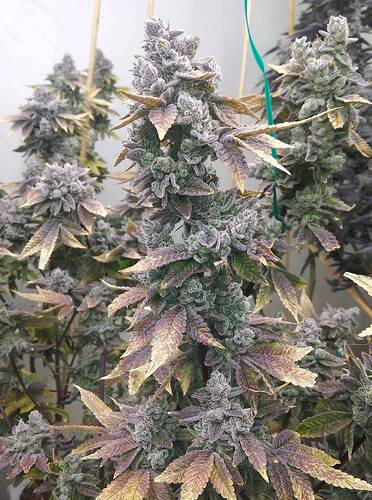 Can’t seem to get this right yet. I’m a noob to the new OG. But I was here back in the day from Cannabis World calamity. So here we go with the Pure Michigan. 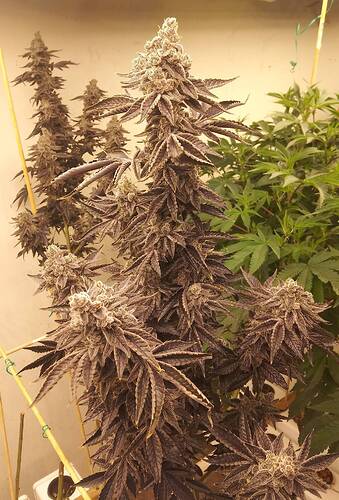 So here is the new project: 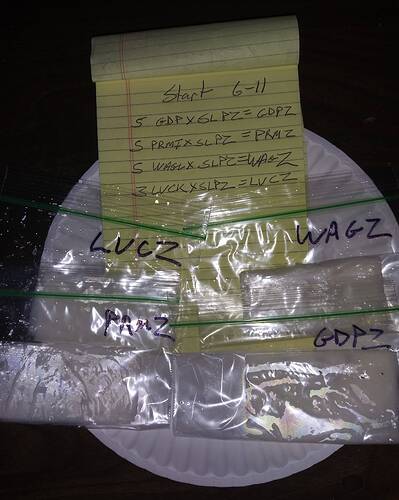 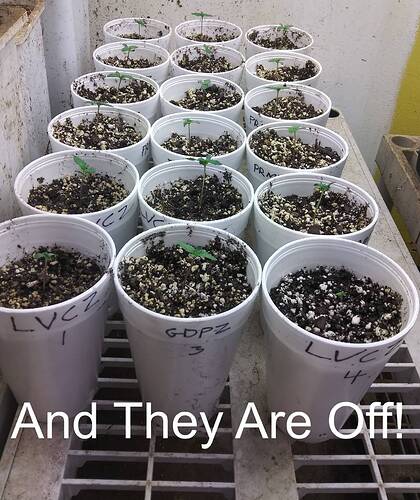 Here’s a nug of the Lava Cake involved the cross. 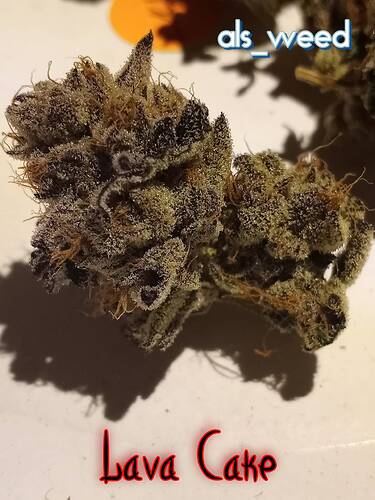 Hey I think we learned to handwrite from the same place!

I’m just kidding, yours is legible.

That’s a great looking bud, can’t wait to see those seedlings when they are all grown up.

You have some beautiful plants, and nice looking buds. Nice of you to bust in here with pics and projects already goin. Not a noob

Thanks for the warm welcome!
Here’s a peek of where we are going - the Bloom Room. 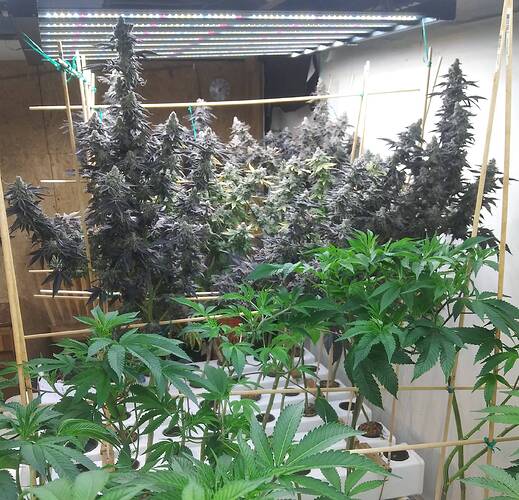 This is GarliCain. It is a cross of GMO and Slurricane. She is not my creation, but produces buds so crystalized, that grinding one up results in a pink powder more reminiscent of an 80s product.

I made seeds of her with Slapz at the same time as the trial participants. I may dig them out based on the results of this experiment.

If you have any questions, please don’t hesitate to ask. My methodologies are considerably different than what you are most likely familiar with, however results are the final arbiter. We have a while before the real action begins! 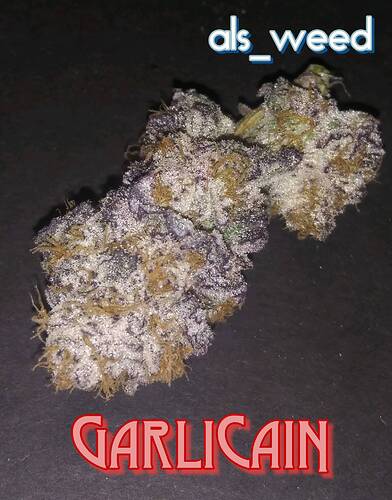 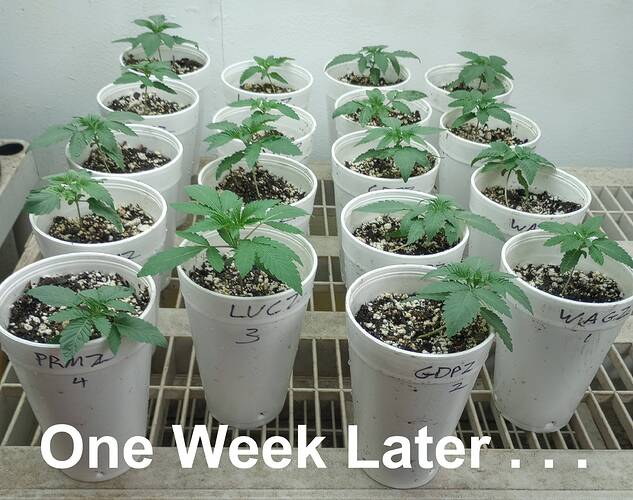 They all look healthy with no obvious runts. They have been carefully fed only RO water at this point.

Plant Sprouts. Germ in damp napkins first. Plant before they lose their helmets. Reduces your loses over just poking in dirt or cubes. You have less waste of everything in case of a dud.

Water Carefully. It’s easy to blow out seedlings by watering directly at their base. Instead, trickle water around the rim. A tipped seedling takes time to recover and may never catch up with the others.

Use larger containers for stronger tap root development. Strong plants like a good 6-8 inches straight down. The best containers I have found are 1 quart foam beer cups. They have a wide base, crowd up nice, hold a good bit of media, and cost 4.79 for 50 of them.

Have plenty of drainage. Seedlings don’t grow well in muck. Make sure your containers have plenty of holes. If excessive pooling continues, see next.

Make sure your media is nice and light. You should be able to grab a handful and squeeze it up into a ball that disintegrates when you open your hand.

My easymix recipe: 50% Ocean Forest 25% Pearlite 25% Worm Castings. This makes for a light but living media I use for all things I keep in dirt. The mix allows me to use teas to feed and keep them in as small of containers possible, for longer.

A few things I learned the hard way.
Hope this helps.

That Pure Michigan looks amazing, there’s another member on here with a journal of some f2s that are just gorgeous.

You don’t find Ocean Forest too hot for seedlings?

Welcome to OG, looks like you have alot of knowledge to pass around

Here is a crappy pic of SLPZ: 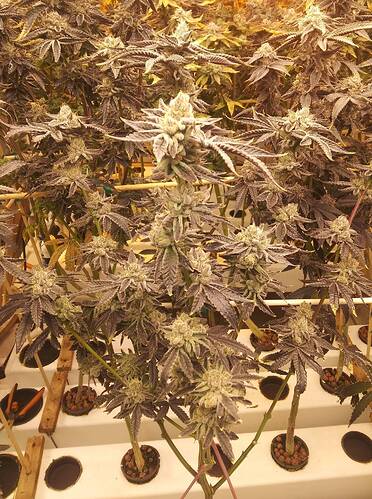 It is Runtz x Grease Monkey and a recent cup winner. It has a short stature and thick base for hyper crystalized, chunky buds. The buzz hits fast and hard - Slapz.

Made sense to run her up against some medium and tall girls. Going to look for some crystal cactus varieties.

Passed her on before getting good pictures. Didn’t plan on doing this experiment publicly. Meh

Happy Frog can be substituted for a cooler mix. I use the Ocean Forest for a little extra oomph because these plants will have to live in those cups for 5 months. I haven’t had problems as long as it’s diluted in a mix,

Thanks for the welcome. I have screwed up enough and learned a lot from others to hopefully contribute.

Looks amazing for sure. So it’s fem pollen then?

That’s amazing, having them for 5 months in a quart cup. Is that just for space reasons or to stress test them as well? Do you ever have to prune the roots when going for so long in such a small space?

It is fem pollen. I have a transition chamber with its own air supply for this stuff. I’m gathering participants for the next reversal project. Thinking of doing it here. We’ll see how this current project goes, and if this is the right place for it.

I keep them in cups for space purposes. Over the next 5 months, we will clone, veg, and bloom them all out. To have a viable potential mom at the end, these girls will sip organic tea only. Having no salts and a predigested organic diet lets me get away with it. We will get to the recipe here soon,

No root pruning needed, but they are certainly tortured in the cups. At the end, the few winners are ready to explode when transplanted.

I root prune moms to keep the generation count as low as possible. They also are only fed teas.

Thanks for your interest.

Dang, awesome! Yes please, I would definitely like to see/follow along.

I’m curious about the “transition chamber with its own air supply.” Would love to see that!

I see you said “pre-digested diet,” does that mean you feed your worms the nutrients or are you talking about it being immediately available via the teas? Ahh, I see you have recipes, always curious to learn more about that!

All in good time.

In the mean time here’s a nug pic of one of our contestants Pure Michigan: 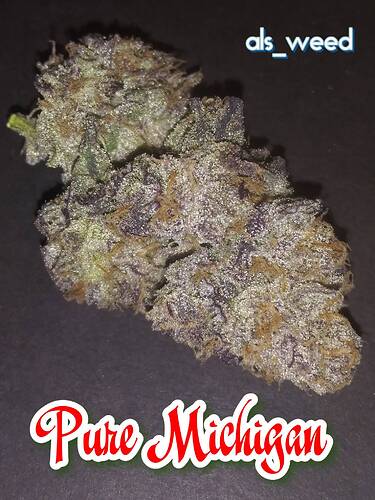 Blast from the Past

It’s been a while since I’ve done live growalongs. I started with doing seed runs for seed vendors and ended up doing fun challenges.

One of my most interesting, was to see how much finished weight you could get with just one 1K HPS. The idea was to do every trick in, and out of the book. I steal Tech from grapegrowers and anywhere else that will help all the time,and tried out many of them in this series.

This was from 10 years ago. I used the always capable 1k Hortilux on a light mover with a couple feet of travel. The plant was Galactic Grape, a big grapey plant with a sparkle from some alien tech genes. Today I would rate it a D+.

The pix are old and ugly but you get the idea.

Here’s a near done shot. All the big fan leaves are on for extended foliar feeding. After the plant stops active uptake of nutes in its lifecycle, You can force feed it with foliar sprays all the way to the end. 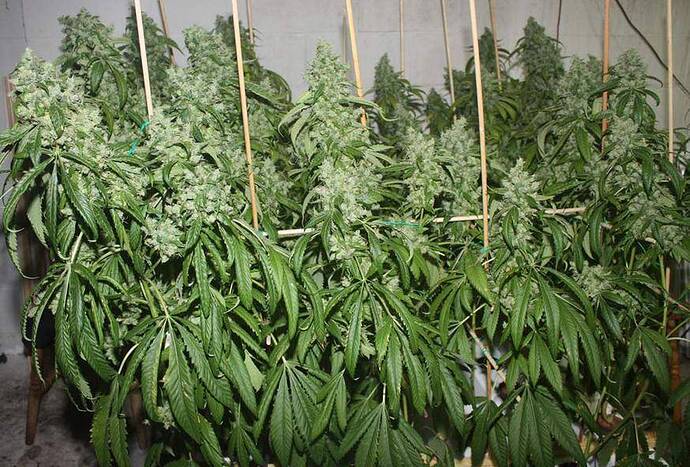 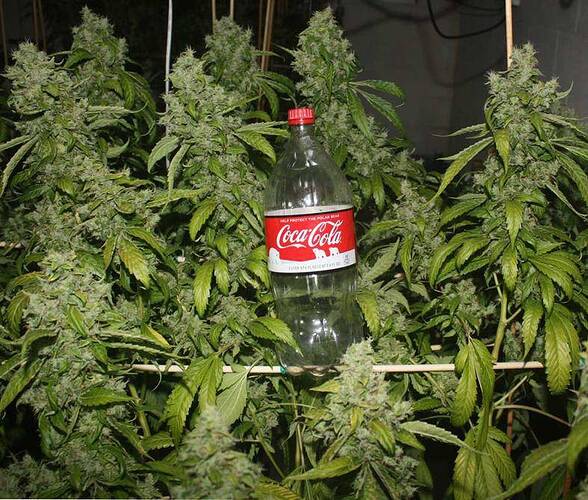 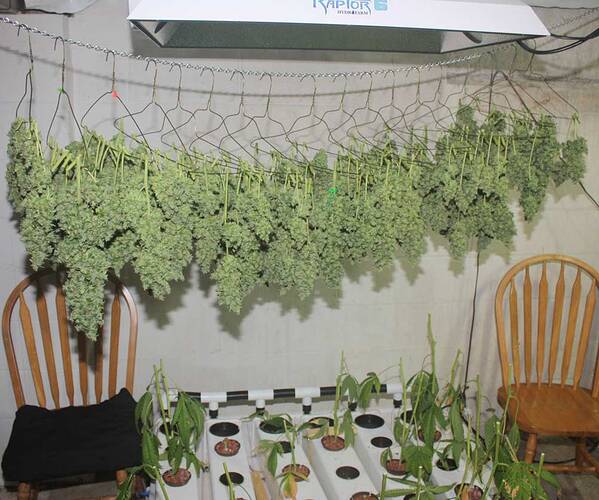 We ended up with just over 3 pounds of mediocre bud. I repeated the experiment, but only improved by a couple oz.

The biggest harvest was not weed, but practical knowledge gathered by the experiment itself, and just as importantly, the wisdom that bubbled up with the interaction of the community. This is the reason I’m back. I’m hoping that this is the place for it.

What I also learned from those old adventures is that its ok to fail. And it will happen. Syntho/Biotic Aeroponics can literally crater in hours. But hey, it’s a long, long ways from Dixie cups and Miracle Grow daze.

I normally don’t play with commercial style strains, but recently I came across a decent one: Tropicanna Bananna. 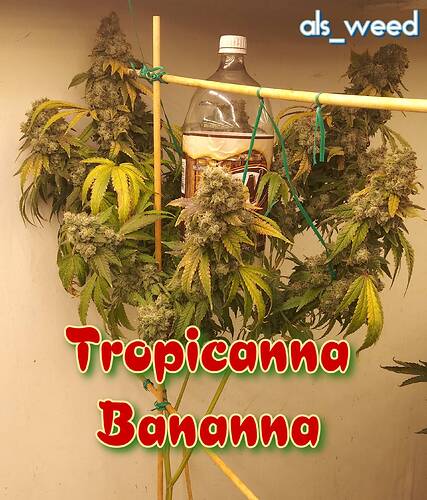 It has a fruity pleasant aroma/flavor and a warm relaxing buzz. A good starter strain for growers and smokers alike. It’s super vigorous and doesn’t mind a little torture, to up the density of its large buds.

Just remember, this is supposed to be fun!

Thank you for your attention, and letting me ramble down memory lane. 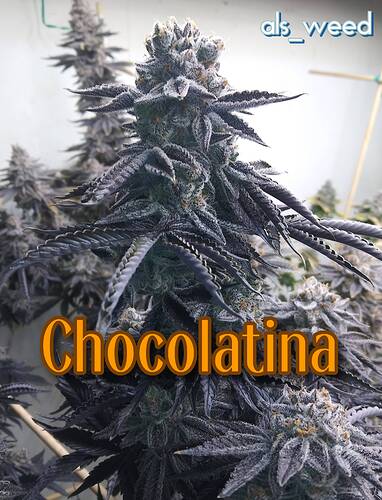 This is Chocolatina. Dank chocolate gas is the best description. A clone out of California, she is rumored to be some kind of cross between Tina and Mint Chocolate Chip.

In any event she rips. And I have seeds of her crossed to Slapz, that await the results of this experiment!

If anyone has any better knowledge of her parentage, please chime in.

As always, thank you for your attention, and don’t hesitate to ask questions.

Some tasty stuff ya got going on over there indeed! Looking forward to more