Thank you for doing this! Sounds awesome!

@Chronickyle , Man oh Man this sounds encouraging , I have been searching for something to help with my decrepit bones.
Signed me up… Been looking thru my stash and I think @Doc.D’s (Kromes The White x Dragon Energy) will be next on the list for pain meds, we’ll see how they do.

Thanks for putting the Blue Velvet on my radar!!
Really need a good pain management therapy, so that I can get off the opiates.

Getting off the opiates is no easy task but it can be done. My father was really messed up, part of the pain clinic program in ontario, getting epidurals injected into his back to try to manage his pain, was on tons of different meds, lost made him bleed, Lyrica was the worst as he lost his short term memory but it took us over a year to truly realize. We just thought he was so high he was joking all the time little did we realize he couldn’t remember saying things to us that he had said. We tried to get him off the Lyrica but then the pain clinic gave him a bad epidural and he barely could walk for 6 months I had to carry him from his bed to his truck seat as that’s the only place he could get comfortable. I learned about rso shortly after this and made it for him, after a few weeks his sence of humor returned and he got out of what was most likely his death bed or death seat at those were rhe only 2 places he had been for about 6 months at that time. He used the rso for a long time and started to get off all of his meds, no epidurals, no pills no nothing, just rso. Eventually the rso made his muscles too relaxed that he had problems going to the bathroom so he gave up on that as the pain that would occur as a result was debilitating. As I grew he would sample all of my strains and smoke the one that would help him the most. We had some good things. But nothing amazing. Till the day I grew blue velvet. It was a miricale. This has been his only way of managing pain for a couple years now and when he runs out no other strain compares. My fiance and I utilize this strain as well. But when I seen how much this strain helped him I knew I had to get it into the hands of every chronic pain sufferer there is.

Sorry that was long and personal but I hope that it shows it can be done. Now matter how gleem the potential is and how much the pain hurts there is something out there. It’s not going to end all pain but taking points off of a pain scale is a huge help.

With work how good could I make this strain? Only time will tell. I hope sour diesal once I get it to bring more energy into this strain and more flavor.

Glad to here your Dad is doing better, sounds like him and I have very similar stories.
Looking forward to these, and very hopeful.

yeah they turn you into a pharmasuitical test dummy with all their scripts. Then throw you on opioids when nothing works! I fully understand his pain and I’m glad he found a strain that works! Blue Velvet sound awesome! For me anything with Bubba in it is a life saver!

I wish I had found this for hubby. His doc was giving him Norco @ 5/6 a day. I started growing with help and love from OG. I got him off the Norco. I mentioned this to his doc and he said no such thing as MMJ. When I took him for a script after not using Norco for 3 months, going out of county. The doctor made an 80+ year old man take a drug test. When is came back no Norco but having MMJ show. The doctor fired him as a patient.
I am having chronic pain now. Fractured knee and tore everything up in knee. Plus back issues from trying to pick his 180 pounds up when he feel and getting in and out of bed. (and 40 years of hard labor.)

Edit; I am using @yoopers salve on knee and it is a blessing.

Thanks a lot for sharing your personal story together with the strain. I’m glad it helps your father so much and it will help others too.

@Chronickyle
Thank you very much for doing this for all of us. Can’t wait to grow these out.

Like @Prince said, thank you very much doing this

Thanks for doing this…how do I know what trust level I am? 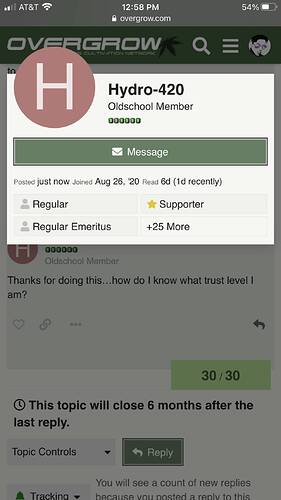 From what @Prince posted you are trust level 3

Oldschool Member tag but I don’t see a trust level??? 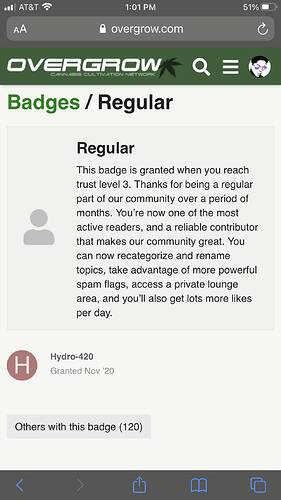 Click your name in any post and a little window will pop up. The first badge it shows is your member level. TL1 is Basic, TL2 is Member, and TL3 is Regular. You’re Regular, so TL3.

Thanks guys for the explanation

Guess I’ll move my name up then

What a great strain for a preservation run. I can’t wait to see how it goes.

I have a brother who I love dearly. He has back problems from disc damage from a bad fall. He says the pain is sometimes unbearable. I would love it if this were to be his magic potion to help his pain. He is deadset against Cannabis, but If this is as good for pain management as you say, I may be able to persuade him to try it. I believe he just doesn’t want his grandkids to know he uses pot. Back in the 1970’s he smoked some with me right after I returned from Germany.

This is a really cool looking strain. Excited to watch this progress. Thanks for putting on the show and spreading these seeds!