Sorry to stray off topic if I am. Just can’t make up my mind about these vs. HID when I spend those precious sheckels.

I feel exactly the same. From what has been TOLD TO ME, the LEDs will have more penetration than the HPS. I am not sure this is true, but really do not know. I grow exactly what your talking about, 5-6 foot upright plants. My Gavita DE WILL penetrate to the pot’s surface, NO DOUBT! Wonder if these will??

I am leaning this way, guess I will have to bite the bullet and just build one to find out myself. LORD KNOWS I am NOT looking at Mar’s Hydro light’s…

I run these eb gen 2 strips! Great cheap alternative to other options. I even ripped apart the old blurple led lights to reuse the power supplies that are sitting within them. Used them in my autoflower grow recently. Thanks for all this info! Results from these strips make me very happy. I put this one together for a close to full coverage in my 4x2 foottent. 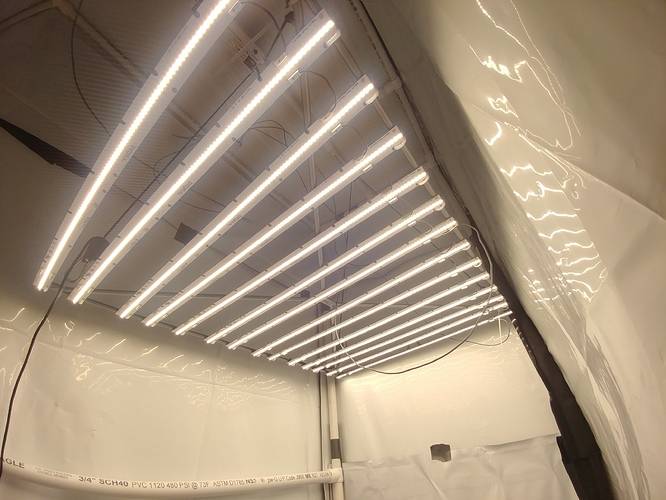 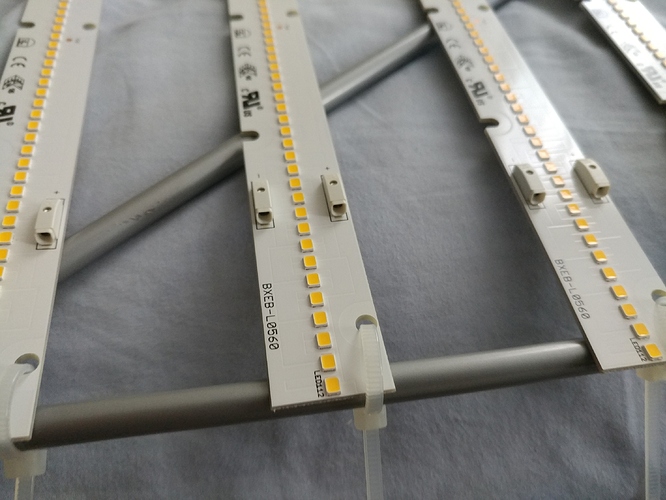 I can’t answer your specific questions, but I just want to point out that, as both an HPS user and an LED user, I’ve never experienced bleaching or other symptoms of too much light under HPS bulbs, while I’ve experienced it under LED panels more times than I can count. It’s always been frustrating, IME, fine-tuning the placement of LED lights in my gardens, while I’ve never had any experiences or worries like that in my HPS gardens. And I’ve even run a 1000w HPS inside of a 3x3 tent before. I think that a lot of the rhetoric around these lighting setups is misguided at best, flat out wrong at worst.

You can absolutely grow trees under LED lighting.

The inverse squares law works regardless of the source of photons.

Such a great tutorial, thanks for putting it together. I’ve been looking at all this stuff for a while and found it a bit overwhelming, it makes alot more sense now.

I literally just finished hanging 3 SIL splitters in my new veg room. I’ll stick with them for a while but at the price these will be tempting me hard haha

For those wondering about growing trees with these, toss a few along the sides. These things are so versatile it seems it would be easy to build a sideways rack that could just move out of the way if necessary. What’s a few extra watts with the savings compared to HID, and big plants LOVE side lighting.

Very cool. Thanks for sharing the information.

Man! I bet you’d get a sun-tan and blinded in a heartbeat

from the pics you posted I see that you are running the L0280s at 140V and about 400mA per side on that XLG.
Are the low temps you referred to at this amperage, 50mA above nominal?

First yes to the numbers, but even though i have them set to have the option to be run overdriven i have them turned down with my potentiometer to right around 100w which with driver efficiencies is right around nominal stated by bridgelux so the temps are at nominal power consumption, but even running that extra 50ma in my case they are just warm.

What is the distance that these lights & similar start to ‘lose’ PAR?
As I understand it good ole HID penetrates the canopy as much as 6’ & probably burns the tops.

Just asking because it seems like LED can’t “throw” light

but then again there are lensed car headlights & outdoor lighting that are incredibly bright.

Is it just me or is there a determining factor in garden height/plant size?
In other words, “LED can’t be used to grow large, tall trees”? And “don’t put a 600w HPS in a 5 gallon bucket micro-grow.”
Sorry to stray off topic if I am. Just can’t make up my mind about these vs. HID when I spend those precious sheckels.

Can’t answer the the fall off question accurately, but as rekio stated inverse square law applies regardless of the light source, but that law applies in an open non reflective environment aka “empty space”, not our typical tent/cabinet/room situations but still holds true somewhat for most practical discussion.

Saying that there is a difference between a high output single source of light vs multiple sources at a lower output per source, what i mean is a brighter single source will penetrate deeper well depending on foliage in a straight line and due to the output level of said source you will have a greater span of what ill say is a “happy zone” for plant growth, a lower output source the “happy zone” is one either shifted closer to the source if it outputs enough, or is smaller… but heres the thing, you combine that with multiple sources that will hit various sections of your plant at different angles its providing more area that way verse countering with depth, and the light is additive up to a point that say you combine a couple sources that are all close together at that lower output per vs a single point that is the same output overall that penetration depth will be essentially very similar.

It’s really a give take relationship between the two, whats better that up to the grower to decide. Tall buds and plants where the backside of them may be underdeveloped, or say shorter buds/plants where all of it is developed or near, but im not saying the plant will be smaller im just bringing up a comparison when i say that as its a trade off in my opinion.

Now can led’s grow trees definitely, a plant will take and use as much energy as it can handle. But also consider how much may go to waste on typical hps plants that may be under the canopy or along walls or shaded by other buds… just something to think about.

Again that’s the trade off, you can have a brighter single source further away in order to cover said area, or can provide more sources of light at a lower output closer up but the area is covered by those multiple sources. Think people scrogging vs growing lollipops or single colas is essentially how i would look at it.

AWESOME write up, thank you!!!

Can you show the wiring of them for us??? There will be ONE driver per “board” is that correct?
They all (the strips) are wired to the single driver???
Also, can you show how you built your “dimmer switch”

for mine im running two sets of 7 in series, with those sets in parallel, just to work with my driver. literally just positive to negative on the strips for 7 of them and then those two sets are joined positive to positive and negative to negative and hooked up to my driver that way. As for the dimmer “poteniometer” literally the dimming wires from the driver, one goes to one of the two side connections “doesn’t matter which” and the other wired to the center position.

And yes 3500k for both flower and veg, reason being is well my veg period isnt that long especially with autos but when you get into wavelength and color output vs what a plant absorbs, light in the red range is more efficient from an uptake energy conversion standpoint for the plant than a blue leaning light is.

the light is additive up to a point that say you combine a couple sources that are all close together at that lower output per vs a single point that is the same output overall that penetration depth will be essentially very similar.

Great explanation for this student.

forsure just consider that were also talking about spreading those sources out further for coverage reasons, but again its that whole trade off thing.

Built it about an inch too long… Fixed it though lol

oops always something for some of us

many points and angles love it!!!

I tried some of the samsung F series and was pretty unimpressed. They’re expensive, and need to be packed literally side by side to get decent output. The LEDs are not dense enough on the board to work very well.

More recently, I’ve mostly been using quantum board knockoffs. Curious how you think these stack up @Mr.Sparkle: This high efficiency LED Board uses 288x Samsung LM301B SK Bin diodes for full-spectrum lighting; critical for the vegetative and flowering stages in your indoor grow. Accepts up to 120W of power at a compact 9"x9". Uses Meanwell drivers, and can be...

I’ve had issues with their connectors coming off in the past, but I have soldering equipment, so it wasn’t a big deal. $75 with heatsink compared to 69+39=$108 for a QB288 with heatsink.

I think still more expensive than strips. They’re also more convenient… which in some of my setups is also worth something.

Yeah if running actual 301b diodes would be no different than the quantum boards, so in those price comparisons above Would be what $150 for boards and included heat sinks, and once drivers factored in would be what $199-218 or so

And the strips vs concentrated board thing its that trade off talked about earlier today, but in regards to the Samsung F series yeah throwing them together is no different than these bridgelux’s its what you need to do to get the light output, and depending on what strips your looking at the bridgelux are a bit more efficient but not by much and you will have to run double the amount of strips for the same rough output favoring the bridgelux, but in the end will still be about 2/3rds to half the price.

Just some comparison links for the 560mm length strips