So I’m looking to make the switch from hid to LED. Replacing a 1000W hps in a 4x4 tent. I’m able to keep temps to mid 80s with the hps so cooling the LED should be relatively easy. So now for my design idea, yalls critique and suggestions welcomed. Will be a 36 in x 36 inch rack see crude pic 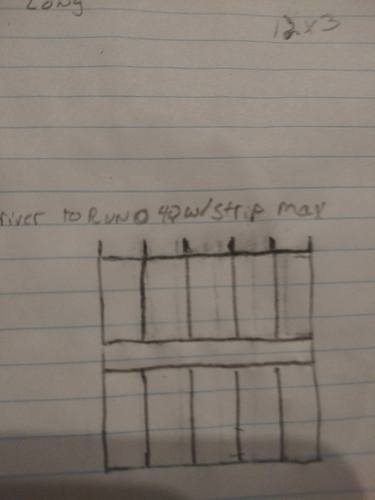 20191226_190009.jpg1872×2496 1.09 MB
It will use 12 sol strip x3. Each strip is a max 72w or in my set up 864 potential watts. Far more than I need. By my calcs I need 560w for 35w/sf which from what i read is optimum for led (running 62.5w/sf now). Now here is where the suggestions come in. Option 1 use a 480w dimmable driver that at max would give 40w per strip which is a little under 35w/sf for my area.
Option 2 run 2 320w dimmable drivers at about 75% since max power would be 53w/sf a little to much I’m guessing from what I’ve read.
Now here are a few questions would it be beneficial to run say 4 of the far red/blue sol strips with the x3 bring as they are 2700k/5000k so they would have peaks in the red and blue spectrums.
I know I’ll need rolls of wire to wire up the strips and some thermal paste to.mount the strips with. I was going to build the frame out of 1.5in aluminum channel so I’m wondering if i need heat sinks. I’m hoping the investment will pay off in lower power consumption since even running 2 320w drivers wide open is only 3/4 of what I’m using now and less heat will mean I can turn my fan down a bit.
You guys see anything I missed? Any build suggestions/ changes? @Colanoscopy is my math on drivers right? Lol I know nothing about led but don’t want to just say hey guys tell me what i need and how to put it together
3 Likes
Colanoscopy December 27, 2019, 12:30am #2

Definitely dont bother with the red/blue. In all honesty I’d not personally give solstrips a second look when digikey stock the EB strips. (Which you could use the 1120mm strips and get a more full footprint in your tent) for a lot less money. Anything arrives broken etc they won’t try and tell you it was your fault to sherm a refund.

Got a link to those? I’ll look here in a few. I just liked the mixed spectrum of the x3 strips but I could simulate that with strips

You could very much do that. And your FL? aren’t you so be digikey US. Gimme a sec I’ll get you a link now

Lol…I just opened digikey.ca because of that post too…

I point people there quite frequently

. I’ve built a light or 10 and I still struggled to understand the way the xlg drivers worked with them after looking there. Sparkle man gave me a good run down though

Ya me too, I’ve learned a ton from that thread. Eventually I’ll get around to replacing my HPS lights with those, just hard to justify because I have nice digi ballasts and new bulbs.

I wish I would have got those strips instead of the SILs I put in my new veg room, they likely would have been cheaper too!

@Colanoscopy have you seen the vesta series strips? They have a 2700k strip and a 5000k strip side by side. Wonder how that spectrum would work out? Looking at the data sheets they have a nice spike at both ends of the spectrum

I’ve not actually seen them but I’m certainly gonna pull up a datasheet now. Sorry for the delayed reply. But it got late real quick last night.

@Daytripr69 just had a look at the data sheets myself.

You could match 7 of the 560mm Vesta strips on a meanwell xlg240-m-ab. Wired in series

I don’t quite understand the “tunable” aspect they talk of if I’m honest.

Been looking some more at specs. @Colanoscopy have you looked at the gen3 strips? Seem to be a bit more efficient by a whopping 11lm/w but almost double the cost . ugggg i had it all figured out until you showed me a cheaper way lol

I looked at the GEN3’s but havent found a place actively selling them yet. I even contacted every one of their distributors here in the US and no-one had any information on them. Seems to be custom order and TBH, for the price of GEN2’s, i’d just go with those. I will be going @Colanoscopy’s route with the GEN2’s when my funds come in.

When trying to use a mix of different strips in the same fixture, be sure to check voltages and max current ratings.

You can use strips of different voltages in series, but not in parallel. Just be sure the total voltage of the strips in series match up to the voltage range of the driver.

The current rating is just the opposite - strips wired in series should all have the same (or close) max current, but strips in parallel can have different current ratings as long as the voltages match.

Meanwell drivers are at max efficiency when running at full power, so dont worry about running them at or even above max rating. They can easily be pushed 10% or more past the max as long as you have good air flow around them. Id recommend you keep the driver outside the tent in a place with good air flow even when running below max…

Oh - dont cheap out and under size the wire you use that runs from the driver to the fixture. The longer the run, the larger the wire needed. Also, if you use connectors anywhere, make sure they are rated for more than the max current you expect to see.

Nice description for matching up light strips and power supplies.
Thanks @Larry3215 !!

Digikey has them listed as active. Let me see if I’m right here i was looking at 560mm strips. They have a listed max amperage of 1.4A and a voltage of 19.5V that would make them 27.3W each correct? Would a higher voltage be better? Also looking at some 1120mm that are the same amperage but run at 39v. Uggg this is harder than I thought lol

I’m going to need a bunch of strips to match the lumen output of my hps which puts out 145,000 lumens. I would need 31 of the 1120mm strips at 4780 lumens as listed. What is confusing me is it says it will put out 175 lumen per watt, those strips work out to be 54.6w so that would make them put out 9555 lumen at max amperage. With those numbers I would Need 15 strips. What numbers do I go with? Would running say 20 strips at a lower amperage get me the same 145000 lumen or more?

Digikey has them listed as active. Let me see if I’m right here i was looking at 560mm strips. They have a listed max amperage of 1.4A and a voltage of 19.5V that would make them 27.3W each correct?

Would a higher voltage be better? Also looking at some 1120mm that are the same amperage but run at 39v. Uggg this is harder than I thought lol

In other words, if the strips are say 20 volts each, and you have 3 in series, then your driver needs to have a max voltage of around 60 volts. You can go a little over on the voltage if the driver is adjustable, but not much. Over voltage will kill a circuit much faster than over current. Over current makes for more heat, wich will shorten the life, but over voltage blows things up fast and lets the magic smoke out. I would try to keep the max driver voltage no more than maybe 10% over the total series voltage of the strips.

If you have those same 20 volt strips wired in parallel, then the driver needs to be a 20 volt driver.

Dont worry about the current. The driver will control that for you. You just need to be sure the max power of the driver is close to the max rating on all the strips added together. Series or parallel doesnt matter - just add up all the watts of all the strips and match the driver that way. Remember, you can safely over drive the drivers by maybe 10% easily, so you have some slop to work with.

I’m going to need a bunch of strips to match the lumen output of my hps which puts out 145,000 lumens. I would need 31 of the 1120mm strips at 4780 lumens as listed. What is confusing me is it says it will put out 175 lumen per watt, those strips work out to be 54.6w so that would make them put out 9555 lumen at max amperage. With those numbers I would Need 15 strips. What numbers do I go with? Would running say 20 strips at a lower amperage get me the same 145000 lumen or more?

Ive read a lot of debate about comparing lumins vrs watts when trying to compare HPS etc to LED’s. Most people seem to be happy just going by watts. If you have a 1000 watt HPS, then (depending on who you ask) a 500 watt to 700 watt LED should do just fine. I personally think 1/2 the total power is fine. You will be able to run the LEDs much closer to the canopy than HPS, so your effective lumins hitting the plants will be greater - inverse square law.

As far as the number of strips, I would err on the side of more strips running at lower watts. They will run cooler and last longer and be more efficient over all. The trade off is cost. The driver will be the same, based on wattage, but more strips cost more plus more wiring complexity, connectors, heat sinks, thermal paste, etc.

So here is an example for you.

Say you want to use use 10 of the longer strips at 39 volts. You can wire them all up in parallel with a 40 volt driver as long as the driver can handle 10 strips worth of power.

You could wire those same strips up in pairs that are in series, so each pair needs 80 volts. Then wire those pairs up in parallel until you have enough total strips. Your driver will now need to be an 80 volt driver but with the same total watts rating.

Or
You could wire them all up in series for a total of 400 volts or so.
Meanwell makes some drivers that go up so a few hundred volts, so you can run several strips in series if that works out better for your setup. Actually, Im not sure Meanwell has 400 volt drivers, but I know they have them up well over 200 volts.

I personally prefer to keep the max voltage under 50 volts if possible - its much less likely to electrocute you than a higher voltage setup, but its not really that big a deal - IF - you are careful about grounding, shorts, water, use good wireing practices, etc.

Unfortunately, it can be kind of complicated. Id draw it all out on paper and double check your math. Then post up your final idea and let a few of us double check it for you.