Hungry and No Yeast! Baking Bread during the COVID-19 🍞

I can not show these pictures to my wife. I need to avoid setting such expectations.

I promise you. If you buy Chad Robertson’s book. You will up your game.

Also. Once you starter is established. You can reduce its size to save flour during feedings.

On non baking days I feed:

In my recipe. I use 200g of starter. So the evening before I bake I feed:

200g goes to the bread making

And the left over 60g+ regenerates the starter at

Mine has been going for 2 years on this schedule.

Found a 5 yr old Prezel Bread pre mix in the cabinet, just mixed it up in bread maker
Active dry yeast is only 5 yrs old so maybe it will work.
I have used 10yr old packs before and they were still viable

Just started a barm from the starter today (like a starter but thicker, more dough like). I’ll let the barm develop for around six hours then into the fridge overnight. Next day will start preparing a dough with the barm.

Just got back from shopping with my wife in NE Michigan.
According to Walmart and Save a Lot employees there is NO bakers yeast available for purchase in the state, and hasn’t been for 2 months!
WTF!

It is very strange, don’t know how they mass produced that stuff but I wouldn’t think it would be that difficult or have such a long lead time.

Ummm, on second thought, probably is imported from China or something.

I’ll have to bitch and moan about this on one of the covid topics but flooring and paint are also banned from sale along with garden products.
Guvner Witless is signing her political career death warrant.
Can’t come quick enough imo.

Just bizarre, the lobbying organizations for those industries didn’t give enough to her campaign?

You can get an abortion but not life saving heart surgery.
Gretchen Whitmer is a deep state tool.
And that usually means George Soros is somehow behind her.
Just plain lunatics.

I had some intuition I guess. At first word of maybe getting prepared with enough food for a few weeks I heeded the call. I was 2 weeks ahead of the stampede. I know I bought some years a while back but couldn’t find it. So I bought at least the one 3 packet. I’ll look to see if I got more. I only have one bag of flour though.

About 7 years ago or more I bought a book called the Bread Bakers Apprentice by Peter Reinhart author of Crust & Crumb. It was recommended by some people on a homebrewing forum I was on. It’s a little abstract and you have to get a grip on their nomenclature and language for recipes but not too bad. I’ll have to start back from scratch again as I had to put it away when I moved.

I’d love to get back into it. The only nice bread I got to was a Ciabatta that was awesome on my first try.

One thing I learned right away was some breads require the humidity to be right in an oven as regular ovens don’t have that and it shows a few ways to fix that.

I’ll check around but I may be able to find some yeast. We only have one Safeway and one Walmart here but about 12 mile up the canyon is a small Italian grocery. They may have some. I went up the other day to grab some meat from their butcher for my beef stew. They looked fully stocked.

I know the Walmart was out right away. I went back after the mob and no flour and no yeast.

I do want to do the sourdough starter. I never have. I may not be able to get flour again though. We’ll find out.

Nope. Just called my secret stash and they said that’s the one thing they don’t have and can’t get.They’ve been trying and can’t even order it.

Now, to see how much I can raise for my 3 pack of instant yeast, on the web… lol

I have that one, was just looking at it today

I’m definitely going to have a go at this!

Could I use some fermented rice water I wonder? I have some because I just made some LaBs

Excellent! Let us know how you progress!

I’m just about to make the dough from the starter (after 7 days of culturing).

The process I’m going to try with the starter in order to bring out some deep flavors will be:

Could I use some fermented rice water I wonder?

Have no idea on that.

Step 3: Kneaded up a dough using the barm. Allowed the gluten to develop to pass the “windowpane” test. Now into a greased bowl to allow this to ferment for around 2-4 hours. Then, shape and final proof. 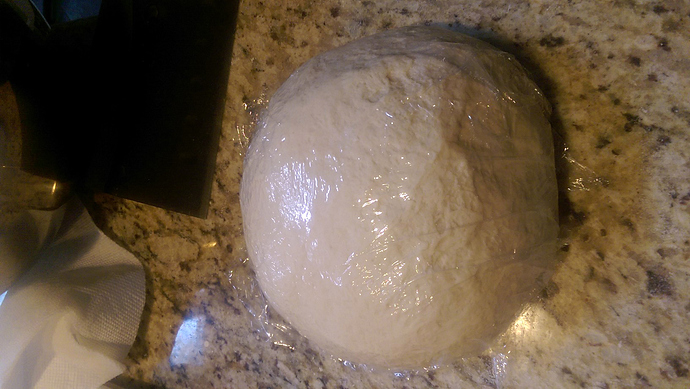 Is that one that becomes the starter? And, are you using natural yeast from the window to make it?

The last photo above is the dough prior to allowing it to rise.

Yeast is natural yeast that’s in the flour (and some honey I added). No instant yeast for this. We grow it (along with some good bacteria) in the starter. This is what the starter looks like: 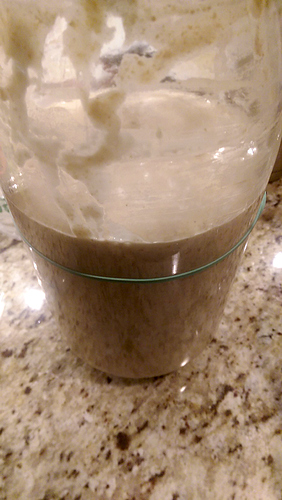 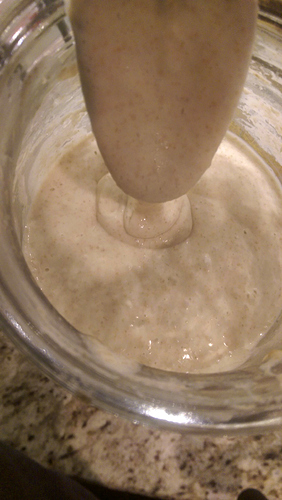 You’d use the starter to seed your much “thicker” bread dough. In my case, the first step is a barm. That’s just a thicker starter, more dough like, that uses the seed starter. It is refrigerated over night to develop.

Then, the barm is used in making a larger hunk of dough that is subsequently allowed to rise, then shaped, then proofed, then into the oven. The steps are really just manipulating the dough and some waiting time.

I did forget to add the salt and had to go back a couple of steps, but it worked out ok.

Just finished. Here’s my first from scratch loaf in years, need a little more work on the decoration but the taste, crumb, crust, and aroma is quite good: 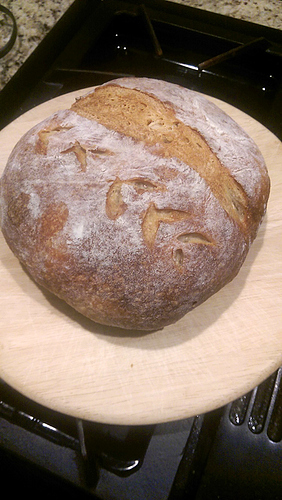 The crust crunches like a potato chip while the interior is soft, moist, with some chew and light sour of the sour dough: 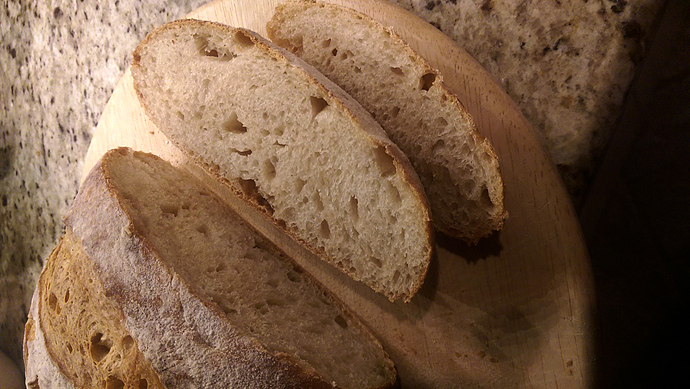 And, because we now have a healthy starter, we could make loaves indefinitely and daily if we wanted (while we have flour). It takes a little bit to get there initially (~10 days before the first loaves) but afterwards it could become an assembly line.

Yeah, I vaguely remember that one. I did something similar; a poulian or something like that. Maybe that was for just the one loaf. I like that method you’re doing, by keeping a starter alive. I’ll be trying this soon. It sounds just right. I love that crust with the soft inside. mmm, mm.