Hungry and No Yeast! Baking Bread during the COVID-19 🍞

Running out of yeast for the bread eating animals (wife and in-law). Making a sour dough starter this week in order to keep the rabble content.

Sourdough is the way to go! Around here it’s used for either bread or waffles. Amazing, no yeast, no eggs, no milk, just feed it flour (rye flour to start it).

Got a recipe or a link for that? I’d love to try my hand at some sourdough. I haven’t been able to get a decent sourdough since I left San Francisco, around here it’s just white bread with added vinegar.

The only bread I can find in stores now is English muffins, which have apparently been neglected by the high volume panic buyers. Fortunately that’s one of my favorite breakfast foods.

rye flour to start it

Rye is the suggestion due to the sugars and nutrients but, if you can’t get it, it doesn’t necessarily have to be rye. We’re having a hard time getting flour varieties around here so use what you’ve got.

Organic unbleached flour will work too. Sometimes it might take a try or two. A dab of unpasteurized honey will have yeast along with nutrients as well.

Got a recipe or a link for that?

There’s a whole lots of information on the intertubes on doing starters. It’s mostly time. Here’s an example: 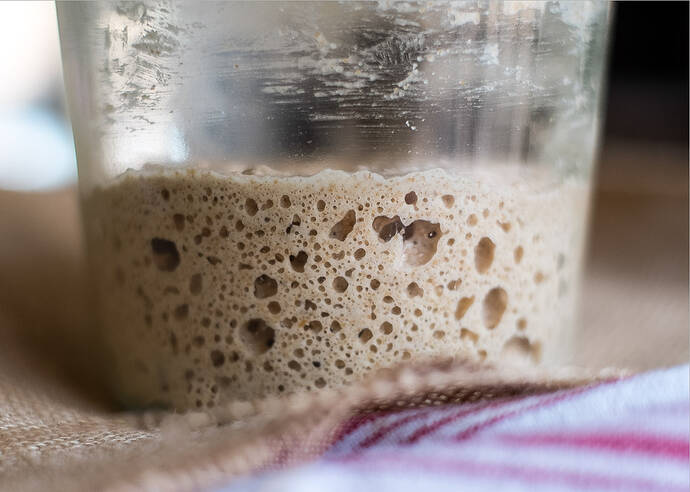 Making an Incredible Sourdough Starter from Scratch in 7 Easy Steps

A step-by-step guide to making an incredible sourdough starter from scratch in 7 easy steps. Start baking sourdough bread at home with a new yeast starter!

Here’s end of day 2 (started at less than 1/4 of the container size, so it’s actively growing): 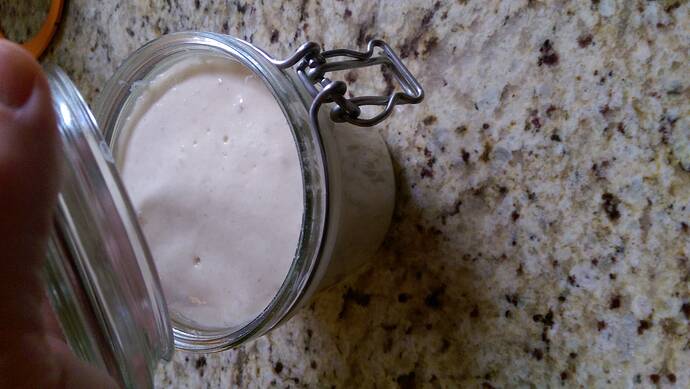 This’ll go on for about a week and you’ll be feeding it daily.
Then, at the end of the week, I’ll use a portion of the starter for the bread but keep the remainder fed until the next loaf. Indefinite supply as long as you feed it. The starter should not smell spoiled but it will have a tangy / yeasty / not off-putting aroma. It should not have odd colors (such as red), if it does start over.

A simple recipe with the starter from Breville (bread machine) could be:

Here is their recipe for a starter (many others on the web):

Going through the trouble is well the effort. Mucho better than instant commercial yeast. And, if you go full bore kneading, forming, resting for the oven (instead of a bread machine), even better.

edit: I just noticed the Breville recipe has both the starter and a dry yeast in the recipe. Don’t know what’s up with that, I’ll look around for something without the need to add a dry yeast as well.

Here’s a work-around for a bread machine using only the sourdough starter (it’s due to the rise time and the short cycles on typical machines): 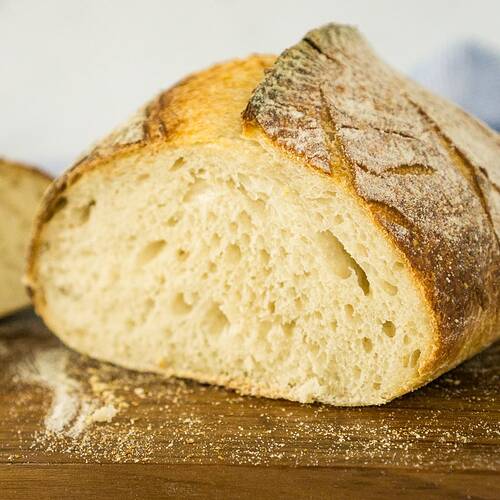 I just noticed the Breville recipe has both the starter and a dry yeast in the recipe. Don’t know what’s up with that, I’ll look around for something without the need to add a dry yeast as well.

The starter yeast I remember was the white yeast that forms on grapes in late summer, early autumn.
That is what distinguished the sourdoughs from the cheechakos.
Once made you rolled it in a ball and tossed it in the flour for keeping.

Though I’ve gotten some pretty amazing breads with just the yeast floating around in the air or within the flour. Whether it’s a true to the definition of sourdough or not, idk. But, damn tasty, crusty, with a long shelf-life. The make-up of what’s around any particular time does change qualities of the bread from what I’ve seen. Always worth the effort however it turns out.

One day I will try to find and post here an old friend’s recipe.
She had it published in Mother Earth News mag years ago.
The cool was you made the starter from scratch, turned it all into the flour, and the whole bread became a starter.
Please be patient, I’ll really have to dig for it.

Botritis ? As that what your talking about?

A colleague of mine’s dad did it with fermented fruit. And thinking back, if I’m not wrong it included fresh crushed grape juice…

There’s a natural yeast on the grape skins (organic and unwashed grapes) that is good for making bread starters (cultivating the yeast). Something particular about that type of yeast.

But, there’s yeast just about everywhere.

Botrytis is a fungus. That would be nasty I think.

Botrytis, the dreaded grey mold.
One of the largest colas I grew was ruined by that damn stuff.
Almost 3" in diameter at the thickest.
That convinced me to dump my particle board cab and switch to tents.

oh, no worries at all.

Bud Rot? Sounds the same to me

Same thing @STIGGY.
Not healthy to breath either.
If you peel open a bud carefully, it’s lying right under the outer layer.
Nasty spores come flying off, looks like dust.
Do that outside if you suspect.
Can’t remember what tipped me off to look for it???

Hate that stuff. I always notice the sugar leaves dying off near the buds. Good indicator to look closer imho.

Oh YES
Bud Rot spreads like fire, best to cut the whold branch off if you find it
I had plants (outdoor) get it after one rain and high humidity and lost over half the plant overnight. I learned to harvest early if rain was coming for a few days in a row, or the big fans came out LOL
BAD Shit to battle, but sounds like you are aware of this.
Thanks

Instant dry yeast still missing in action just like the TP. Here’s the start of day 4 feeding of a sourdough starter.

From day 3, starter has a pleasant and tangy sour aroma. Activity is not as vigorous and there is no sign of a yeast in the aroma yet. The desirable bacteria is eliminating the bad bacteria and soon the yeast should start balancing with the good bacteria: 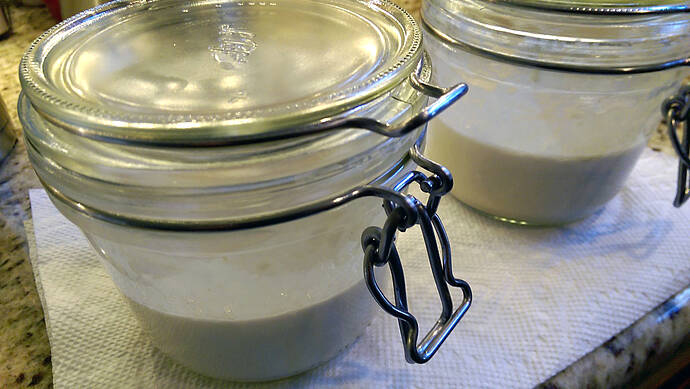 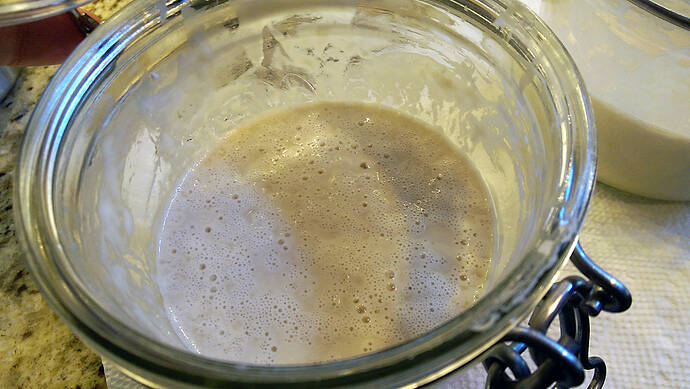 Let’s give it some food. Two TBS of flour, two TBS of distilled water: 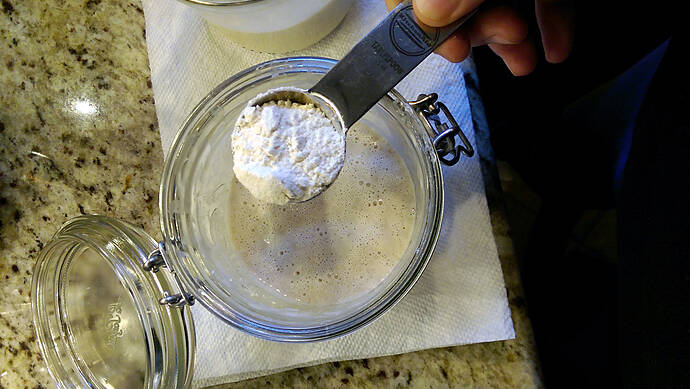 Integrate fully, cover, and onto day 5 (maybe another feeding late in the day): 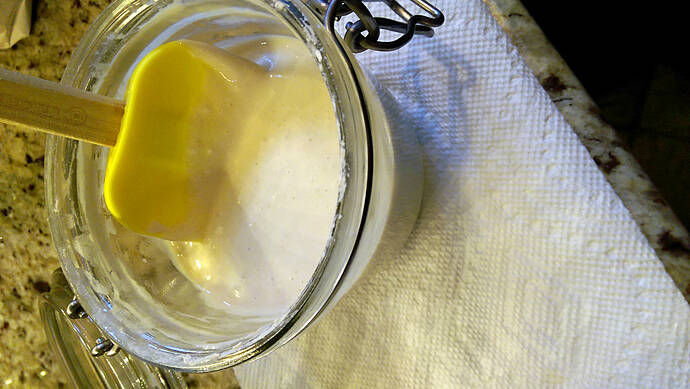 You guys and your sourdough starter talk made me go dig for this gem. 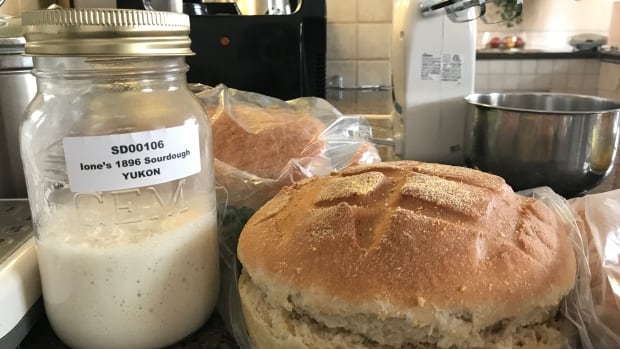 Some of Ione Christensen's prized sourdough starter is now in a Belgian sourdough library where tests were done to try to determine its chemical makeup and its history.

Loki, I have a large bag of distillers yeast, I wonder if that will work in my bread machine
I guess I would use a tablespoon or two and try it.

I may have found my own answer, I can just not use any salt

Can I use distiller’s yeast for bread baking?

The yeast sold for making bread and brewing beer is the same species of yeast, but different varieties, bred to produce different results. Bread yeast is specifically bred for low alcohol tolerance, so it stops fermenting when the dough reaches a level of about 3% alcohol. Most beer yeasts are designed to produce more alcohol, and will keep on fermenting the dough long past any useful point if you let them. Yeasts are also designed to be more or less salt resistant. Salt will slow but not stop fermentation in bread dough, but brewer’s’ yeasts may be less salt tolerant.

You can experiment and…