Oh hey there… I didn’t even see ya - My apologies…

Since I’ve got ya though… Hear this!

Just so happens my neighbor has a cow that looks exactly like that! So I left the bar and borrowed the cow for trading. Not sure what we are gonna do here so bare with me while we search through these holy beans I have been torturing in my lair. Want to see what happens? 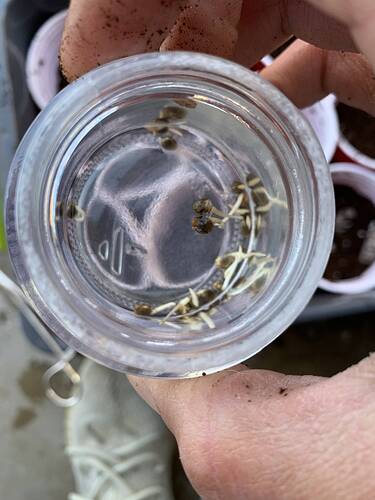 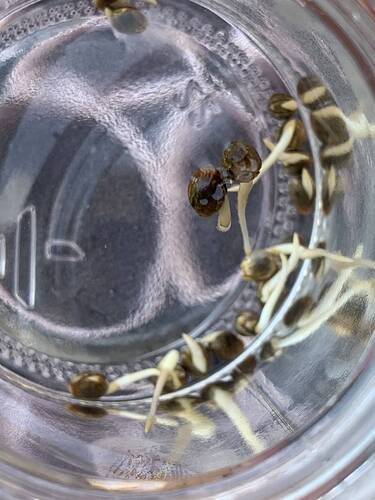 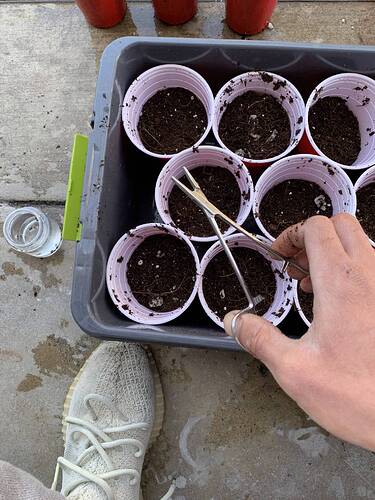 Catch u on the flipside amigos

What are you showing the hemostats for? Is that how you handle the sprouts to get them into your soilless mix?

Here for the ride!

Aha! A good eye - That is quite funny not many people even know what those are… 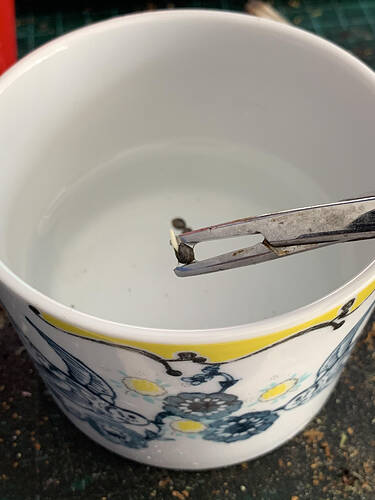 Good luck man. Should be fire. A true classic.

- back when it wasn’t a socially acceptable accessory

Btw, I’d be more impressed had you put a pair of these into service1

“Mister Grafik U forgot to tell them the prize”

Gah! Gotta love to hate the women who remember everything…

While I was on vacation I took the best autoflowers I had and selfed two of them to pollenate the other best autoflowers I had. Now these autoflowers come from a friend who worked them over the course of close to two years and we lost contact. I was entrusted to further his line and that is what I have been doing so now I figure out a way to get them to you guys.

I cannot give out his genes so what I did instead is made an outcross to the strongest most mature OG I have. Faceoff OG x Runtz. I call her Stripe as in reference to the movie Gremlins. Her twin is Named Mohawk but under training shot some ballsacks so I have been unworking her since…

Here are the ugly meds 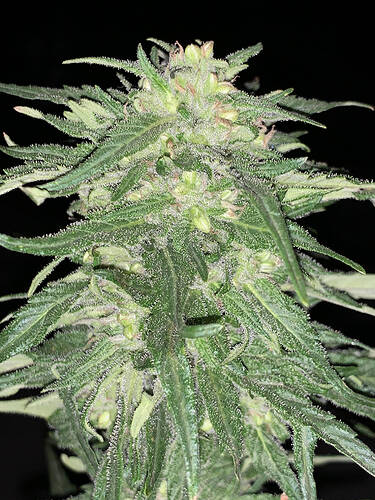 Anyone who wants some of these progeny and is following along here - Your boy got you! If you don’t want any that is cool too. Don’t blow your hair back.

Ok so now the Alien Honey is happy again. Can I get back to workin’ my charm? My Hennessey is getting warm.

Damn she reminded me another thing… I ask one thing - If anyone knows where I can get the real deal Chem 91. I have been searching for this since 2011. Help a bro out.

I tried to speed off and I totally missed your comment -

Happy you showed up! Should be a good time

Dang I’m all in a rush and I missed both comments!! now I’m spamming… My bad guys

Of course I do, that’s a roach clip.

I’m out of damn likes! But I will turn the spaceship around to reply to Reiko.

I and my homies

are going to park our

and follow along with you. This is so entertaining.

Glad I found the show! Pulling up a chair for this one

Ah man get this right… So me and this smokin’ hot Alien babe are grabbing drinks at Zanzabar and SHE WON’T stop talking about this one dude Chad.

I really don’t have time for this space jam right now. I’ve got an OG auction to smoke and this guy is challenging my finger biceps while you’re over here ranting about some dude in shorts, socks and boat shoes with a facility and 8 rooms. Blow me! Check pls!

So now I’m back and glad to see that very Holy Angel I was talking about in the first post here to join! What’s up my bro @HolyAngel !!

Not only that but some fellow aliens came along @G-paS ! What’s up my bro !

So I guess she wasn’t the one. Damn I really liked the purple antennae she had. 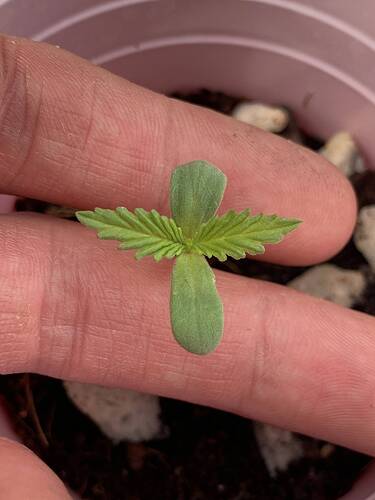 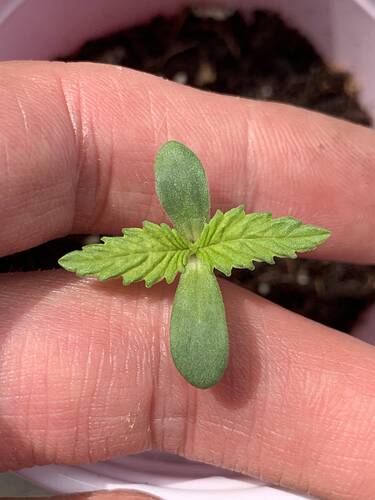 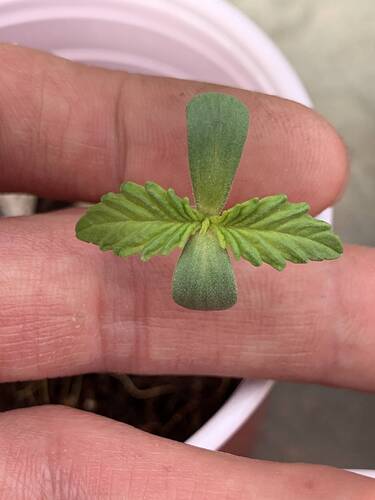 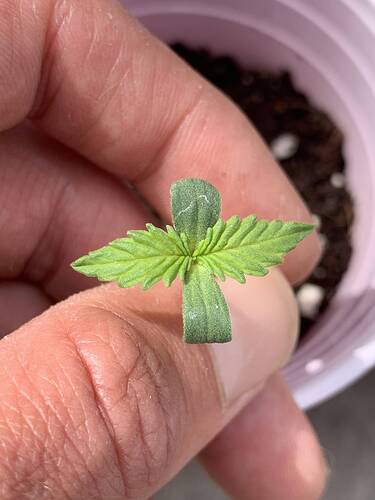 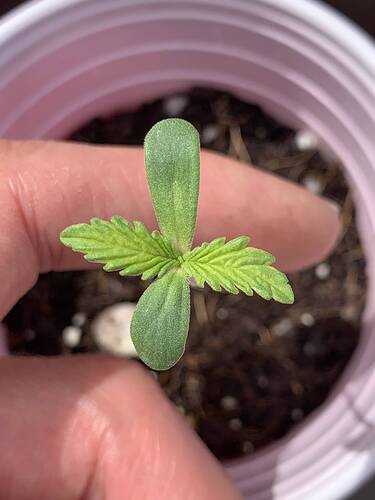 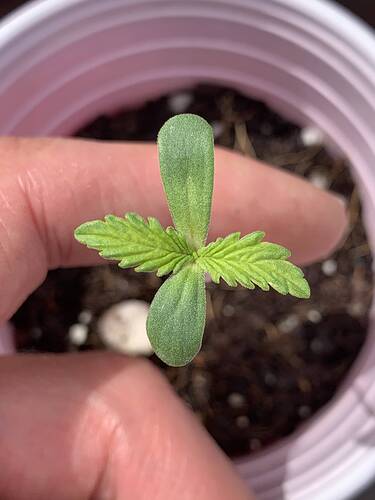 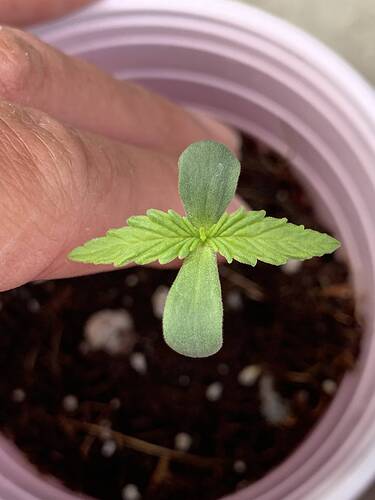 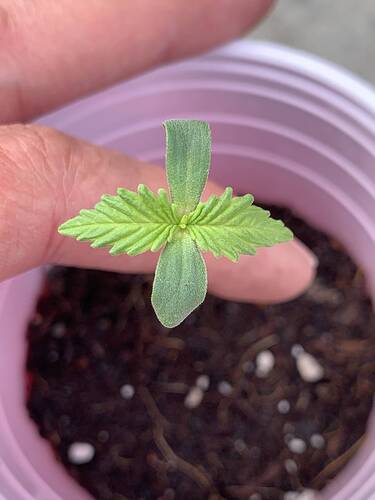 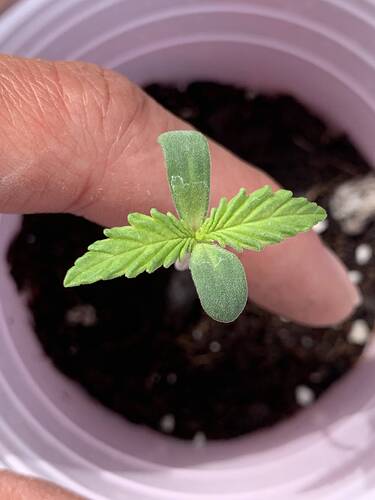 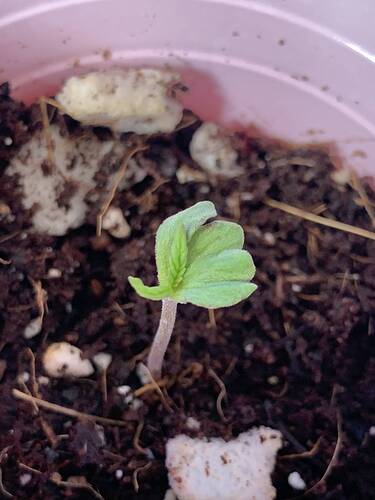 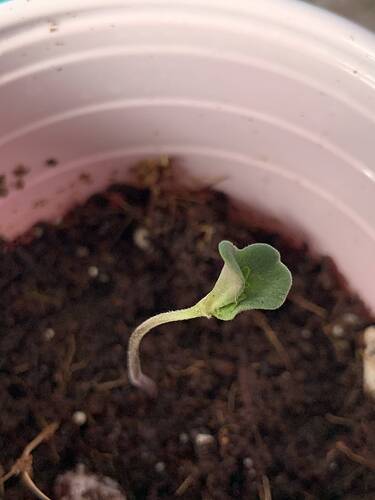 A heatwave hit here and then left so I’ve been murdering thrips like a madman waiting for my green lacewings to hatch, form a gang and kick the shit out of the tres thrips putos. No I don’t buy the lacewings they love my blueberries because everyone loves my blueberries.

If you’re into biological control the predatrors are always lagging behind the pests. Just by a little bit - so manual destruction is essential.

Damn I am really bummed about this Alien Babe.

The last two are outliers. Probably will put them on a pedastool.

Tomorrow I look for the shiney ones. And maybe the thrips help find the tastey one… (jk Holy)

Then we will mix soil I will maybe show you my super secret proprietary blend. Plankton has tried to steal it for years. 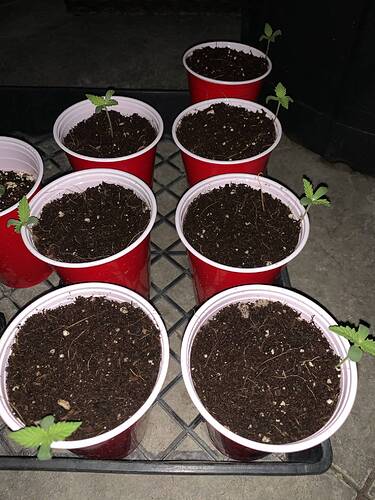 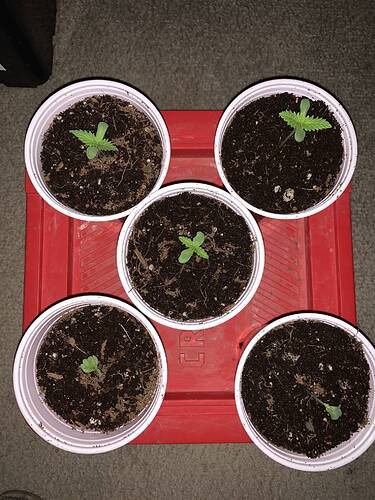 Quickly! While no one is looking’ 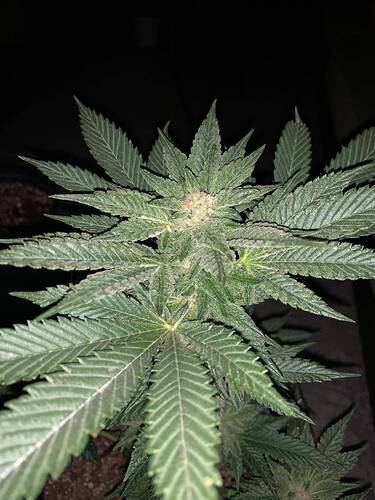 The reason I am so excited for these and will be searching for a male is simple. I work with Northern Cheeze Haze from Mephisto that was crossed with Purple Gorilla. Chunky haze? Yes it has some issues but there are some incredible plants that soak up every watt of light you can give it while exploding in growth unlike any other auto.

Northern Cheeze Haze "We selected our favourite lady from these F2 plants to keep a cut to work with. She was also trialled outside, and being a sativa hybrid (similar to amnesia in this respect) they kick into flower noticeably later, by several weeks in comparison to the indica, and OG varieties being run at the same time.

This actually meant whilst everything around it was battling the late summer/early autumn storms, the NCH was unphased, and again produced massive, tall plants packed of yield.

We wanted to start exploring and adding more sativa based autos to the Mephisto Catalogue, and decided to pair our most sativa auto; Fantasmo Express to our favourite sativa leaning photoperiod: Northern Cheese Haze.

And thus began the process to turn the NCH auto.

Over the resulting generations of breeding we witnessed all sorts of phenotypes emerging, larger structures familiar to the Fantasmo and hazey elements but with looser flower structures.
We shied away from utilsing those, in favour of more cheese-like compact but musky frosty buds. As with all Mephisto strains we prefer to breed for overall quality and then unique traits over outright size and yield: After all, who wants a plant rammed of flowers if the flowers aren’t up to par?

The outcome may not be the most hazey affair, but overall we’re very satisfied with the resulting creation and delighted to introduce her as one of our new Artisanal collection strains for 2017 - find out more below.

She’s also already been put to use for breeding work in a future project involving a super sativa seed club relic from holland ‘Old School Haze’.

Overall we’d classify the NCH as a medium sized strain, with potential to monster at a fast rate.

Seedling growth is pretty rampant, and the NCH expresses fair sized internodal gaps and she doesn’t put out much foliage meaning light penetrates through her well, which can result in a nice multi-branched plant without too much effort at all.

There’s a few phenotypes within the line, some bring about fatter shorter nugs, and others with more stretch but the end result is a very similar yield and they both have in common a very compact structure resulting in firm buds and a sublime end product.

She doesn’t afford too many trichomes on the fans but the flowers get quickly enveloped in a generous coating and the odor during growth is relatively low unless you set about touching and exploring a little too adventurously.

The flowers build solidly but can also make some small compact foxtails; Just something to note

When harvested though, even immediately if you get your nose in there you are welcomed by a beautifully spicey musky cheesey aroma.

Our Northern Cheese Haze automatic, was tested by Canna at an expo earlier in 2017 and a random bag bud came in at 21.07% Cannabinoid content, and this was from a breeding reject with no special treatment or harvest preparations or even a ripeness check.

So we think with a nice hand this variety could produce some very stellar results."

A real hazey auto - even though they say it isn’t the most hazey I have selected for the haze phenos. My friend whom I lost contact was the mastermind who made the Purple Gorilla gene swap to this haze.

Purple Gorilla "Auto Purple Amnesia broke all records when 1 plant produced a massive 681g in independent test conditions and Auto gorilla OG has been wowing growers since its release in 2017 with its incredible potency, easiness to grow and wonderful flavour. The combination of these 2 strains will not disappoint!

Like both its parents Auto Purple Gorilla shows explosive growth right from the start and does not require any special care or attention to give you great results. If she is treated well and given enough space and light to fulfil her potential then she will pay you back with incredible yields.

As Auto Gorilla Purple matures you will notice she has a very dominant main cola but also excellent side branching and she will get almost as wide as she is tall. Due to the incredible resin production that comes from the Gorilla Glue ancestry the buds on side branches can get super heavy and may need to be supported. The buds on this plant can get coke-bottle sized and are very dense with an incredible covering of sticky trichomes. Some of the Purple colouring of its parent has diminished but certain individuals will produce some beautiful purple buds.

The combination of both were apparent. I select for f2 haze. I balance with f3 - I also select for the opposite because there are too many combinations that are ‘possibly good’. So I capture structure from the multi branching haze and throw fat resin colas on it.

From here we have a beautiful plant; I am flowering one, two three currently and pollenating two of them for f4.

Northern CHeeze Haze has parental lineage from NL5H - so it is only natural to create a new hybrid with adding the NL5HSS #5 pheno into it. 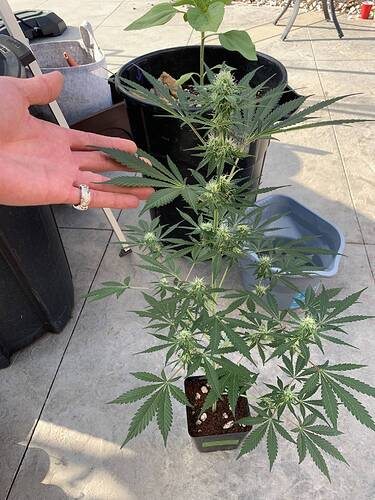 This select here was not good. Blue coloration; first to flower ; But the odor reak. You can see the lower branching lacked etc.

Using her for flower.

Wish I had some pollen to fix her up! Edit - We are hitting them all! 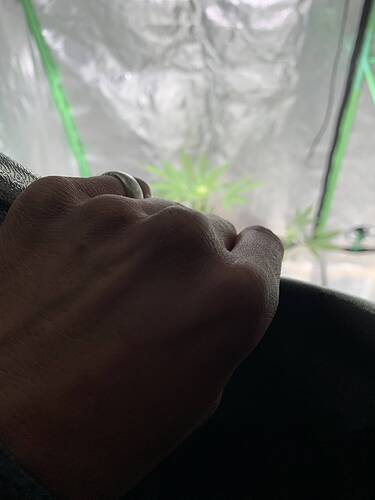 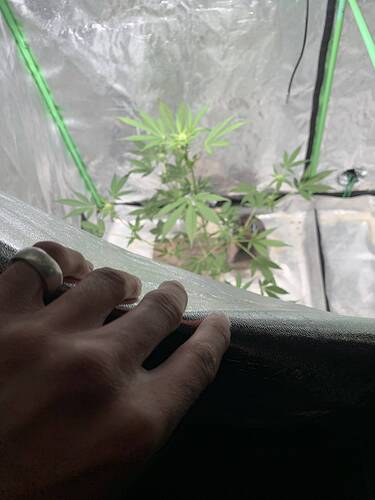