Hello everyone, I am looking to build a light with Bridgelux strips. I would like to build a full spectrum light to go from veg to flow with. Can any one suggest the way I could accomplish this. Its to fill a 4X4 tent.

This will get you up and running fast…

Well figured id start a thread just to share for anyone thinking and looking for a viable alternative to SIL “Screw In Light” Led arrays to rigid DIY options such as QuantumBoards, Solstrips, Meiji Lighting products, or any pre built options out there like marshydro, and the likes. I’ll leave this thread open to discussion and post ups of other cheap strips and product lines as well because tech is always changing, and getting better and cheaper everyday. So to get this started let me introduc…

@nube just started a thread on one of these

Excellent suggestion!
Here it is.

I recently built new LED flowering lights and wanted to detail it in its own thread. I’m a total electrical newb and I have no workshop or tools other than a drill, but I DIY’d some lights before and figured I’d do it again. First, a little background. Starting in the mid 90s, I’d grown strictly personal under MH and HPS in DWC or hand-watered rockwool using GH nutes. In the late 2000s I made some big life changes, quitting smoking cigs after nearly 20 years, changed my diet, got back in shape…

Hey Timbo, I’d probably recommend something slightly different from what I’m building. However, the best place to start your research is the LED Gardener DIY Builds on their website here:

DIY LED strip builds have become very popular recently. The mid-power section of our forum is full of threads created by DIYers looking to build their own custom lights, and new builds and ideas are surfacing every day. If you don’t live somewhere...

At that link, scroll down to the 4x4 section using 4ft strips, expand it, and then scroll to the Bridgelux section. Their build is killer even today for both veg and flower, and you can get those 4ft 3500k Bridgelux EB2 strips from Digikey for cheap - I think about $8.40 per strip! But there are a few things I’d do different today.

The biggest differences from their build is that I’d build 2 separate frames using 1 driver and 10 strips per frame. I attach each strip to 1x1x1/16th 6061 square corner aluminum angle instead of heatsinks (cuz heatsinks aren’t needed at your low power levels). If the angle was too expensive, you could go the same route as me and use the 44.25 x 20 x 1/8th 5052 aluminum plate referenced in the build thread linked above.

For drivers, I’d recommend either the XLG-240-H-A (or -AB) or HLG-240H-42A. Those would get you something like 525w combined from the wall. You wouldn’t need much more power than that, probably dim them all the way down to 50% in veg and turn them up slowly over the course of a week for flower. If you wanted to spend a little bit more on the strips, you could get the new generation Bridgelux EB3 regular (not slim) strips in 3000K or 3500K, but those are only worth it if they’re less than $12 per strip.

Wire them in parallel. If you don’t know much about electricity or wiring, either ask a friend who does know their stuff or maybe consider buying a kit. Don’t want to hurt yourself and we’re dealing with pretty serious hazard if stuff is wired wrong. It’s not hard, but you want to get it right.

Use liquid electrical tape on the solder point connectors on the boards if you are using the push connectors.

I couldnt find any 4ft gen 3s in stock

Those have been on back order for a while. I was gonna order some for a friend’s 4x4 build. I built one for my 2x4 using the 22" strips, and it’s awesome. Easy to assemble, and they are bright as hell. My plants love it!!

They’re in stock as of last week. 307pcs in stock right now. They’ve sold 100 since last week! Going like hotcakes, but they’re coming back in stock quick each time they go out.

Those things are amazing for the money for flowering, though they are $2 more per strip than when I bought them a few months ago.

I know enough about the DIY to know I don’t want to do the math and order all the parts. I know nothing about wiring or soldering, but I can put some screws and those wire caps together lol.
Vanity lights with off the shelf screw in LEDs with plastic domes removed. Screwed to strips of wood and twisted wires together to a extension cord I cut. The CFL are reptile UVB bulbs, I need to get a few more of them and of the same brand. 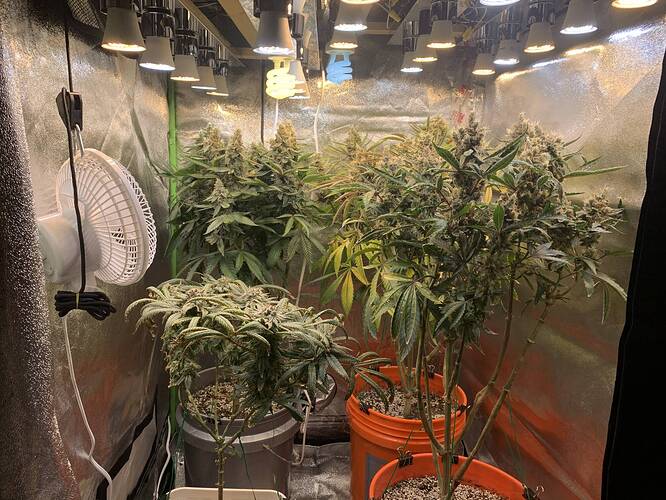 Hey check put this guy. He dose really comprehensive work. I plan on referring back to him when I build my own LED. If this video won’t help he has allot of others.

I was looking at the 80CRI 3500k. Do you have much experience with the different spectrums?

Thank you @Calyxander I your response to my thread . I will read over it.

Thank you very much @nube for all of the information. I do have an electronic background , I just need to get my head into this led technology . I appreciate the info, now I can check out the links and setup you refer to.

Thank you @LilJonB I will view it as soon ax I can.

That’s a nice view there!

Hey Timbo, no problem. Happy to help in any way possible. I’d say just keep in mind that technology moves fast and 3yr old info is not really relevant other than the electrical wiring stuff, which you already know.

These days it’s pretty easy to DIY a light because somebody’s done all the work for you, so there’s no need to reinvent the wheel or do any math when putting together the parts list. It’s pretty simple stuff and luckily other people have put together the basic parts list and even linked you to it and given you a wiring diagram.

All you gotta do is figure out the space you want to cover and your budget. The only work is building the fixture to mount the LEDs, and then stripping and plugging in some wires. It’s literally that easy.

Currently, builds using white midpower LED diode strips are the best bang for your buck. There’s a lot of reasons but it’s not worth getting into the minutiae. If you have questions, search in the first link that @Calyxander provided to the Overgrow Cheap LED Strips thread. It’s good stuff and the people there are kind and patient and helpful. I’m happy to help with anything you need.

I was looking at the 80CRI 3500k. Do you have much experience with the different spectrums?

Yes, the 90cri strips are less lumen per watt, but that’s more than made up for by the presence of all the extra far red. See, efficiency to us is only part of the equation. We also want the most and best growth. I’ve built a few lights with different tech and spectrum, but more importantly, I spoke to a few LED industry folks about this over the last year and learned a lot, and found out from them that Bridgelux strips are an unbeatable value for your money, even though it’s their competition.

The extra far red (from 680nm to somewhere around 740nm, peaking in effectiveness around 700nm) basically allows the plant to complete double the photosynthesis for each photon of far red when combined with full spectrum white light. It means that those extra far red photons produce more photosynthesis than the same amount of additional white full spectrum photons. This is the Emerson Effect discovered in 1943, and just recently proven to have the narrow range of effect noted above.

I’m no authority on this; this is all based on the current scientific literature I’ve read. I linked a couple papers in my build thread noted above, and Bugbee talks about this in his NASA funded and FDA approved cannabis lighting research lab in the University of Utah State videos also linked in that thread. The Emerson Effect from that narrow part of the spectrum has now been vetted by a number of plant biologists.

Anyway, for strictly flowering, the extra shift to the amber end of the spectrum of the 2700k 90cri strips (pretty much only available from Bridgelux) is supposed to be well worth it compared to the relatively minor loss of efficiency from the extra phosphor coatings. If we were only worried about the efficiency (or efficacy) of an LED, we’d all be using 6500k 4.0umole/j strips and growing muff cabbage midget plants (no offense to little people). But we’re not, because real world plant outcomes matter just as much as theoretical numbers on a spec sheet.

Thanks for the reminder of the silicone over the solder pads on the ends of the strips. I don’t touch them, but it’s good practice to have them covered, even in my low voltage builds.

Tell me if I’m reading that right? this strip will put out 26.8 watts? So I would go for 18 strips to get around 480 watts? If so what kind of drivers to use with this?