Fungus gnats in a new bag of soil

Fungas gnats in soil how can i get rid of them they are in a new bag but they won’t take the bag of roots organic back lol. I never had this issue before i would prefer to not let soil dry out and kill out the life in the soil.

grind up a pack or two of mosquito dunks in a blender and add them to the soil. Also, you might want to consider sterilizing the soil via oven or microwave, and then reintroducing beneficial bacteria afterwards

Will that affect anything organically? Is it on amazon?

It is just BT I think, I have ordered another version so I will not have to sacrifice any grinder or tool …

i like to do what @monkeyman and @George1961 do I also like yellow sticky traps, but the traps more for monitoring

I have both, yellow and blue, never knew which one they liked …

as well as one of there predators

Gotta hit em with more than one method of extermination. Let’s say the neem today, and then BT at the end of the week, then maybe some spinosad as the third application, halfway through the next week.

If you try to eradicate a pest with only one method, you’ll just breed super-bugs.

Bugs take many many generations to become resistant to chemical pesticides so that is just bro-science my friend. Preparations of bacterial pesticides and things like insecticidal soaps/oil sprays never breed resistant bugs.

Spinosad is for spraying on leaves is it not? Gnats don’t live in the canopy so it’s kind of useless for them. You might kill a few but they are as likely to be walking on the ceiling as sitting on a leaf. Adult gnats just fly around and mate then the males die and the female lays her eggs in moist soil. Yellow sticky traps just above the soil surface will trap the majority of adults soon after they emerge and things like the dunks will kill off most of the larvae. I have some stuff called Gnatrol I bought a while back but haven’t had need yet so not sure if it works but nice to have handy. If I can find it. lol

After some research I can find no mention of Spinosad being effective against fungus gnats or any other soil dwelling pest. All sorts of things that attack the leaves but not gnats. Think I’ll get some for those damn thrips tho.

It’s man-made chemical 'cides that bugs and weeds get resistant to eventually in much the same way we’ve ended up with all sorts of antibiotic resistant bacteria that now plague us. It still takes years and like I said, many many generations before resistance sets in.

I got rid of mine by using lots of sticky traps and a good lot of diatomaceous earth on top of the soil and kept that dry by watering from the bottom. I also blocked the source of the bugs which was the sump right beside the grow room and actually part of it. Bags of soil are very often the source as they will infect bags that are waiting to be sold and have even tiny holes in them. They can also infect soilless mixes too so keep all that stuff far away from the plants.

Even if you just keep the population low then they aren’t going to hurt the plants much but best to get rid of them.

I mix about a 1/4 cup into the top inch of soil EVERY time now. Keeps them away !

Spinosad is an extract of soil borne bacteria, tho, but you are correct I am mistaken. Spinosad isn’t for fungus gnats. Gnatrol is the same bacteria as the mosquito dunks.

Bugs take many many generations to become resistant to chemical pesticides so that is just bro-science my friend.

I’ll gladly accept that if you have a source to corroborate it. A generation in fungus gnats is measured in weeks.

I cook my dirt first…Exactly because of this type of thing.

Used to grow garlic in with my plants never had any problems with bugs ,sounds funny but it works,old school grower showed
Me that trick

Already started the treatment and topped the plants, I will let you know if it finally works … 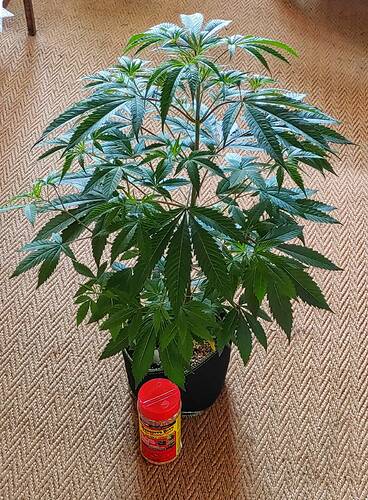 yep, I had big troubles in an area that is renown for them and tried all sorts from soil drenches to DE layers and lining pots etc. Two best things that i ever did:

After I started doing this TO EVERY POT their numbers kept reducing until they were gone. Occasionally i get one on the sticky trap but it is always a full grown adult and isolated. So they keep coming and trying but just cant colonize.

Gnatrol works too, if you don’t want to grind up or grate those dunks. It is about $15 for 2 oz, or more economically it’s approx $30 for a half pound on eBay. Gnatrol is 37.4% Bacillus Thuringiensis Israelensis and Dunks are only 10.31%

Yeah i have something called Gnatural around here. It is a powder that you mix and water with. Would also be a strong dose. Works well but needs to be applied a few times to a schedule due to the breeding stages and repeatedly as they keep attacking. I like the set and forgot of putting it in the soil. Every time you water it releases a little bit. So any lavae will be hit throughout the life of the plant.

Mosquito Bits has the same component than the dunks and Gnatrol: BT, and you don’t need to grat them …

Gnatrol has the same magic ingredients as the dunks - Bacillus Thuringiensis Israelensis, just at a higher concentration, the rest is only inert ingredients. You can use the gnatrol in the soil just as you would the dunks.