Q: can I use the plant for cooking?

My mum wonder if she can use the leafs, stilks and maybe roots (from some of my male plants) for oil extraction, and food supplement, and if there is a any nutrients and other goodies at all within said plants?

We have done some research, but can’t seem to find any answers to this.

I have a old huge plant she want to use for this that thrive outdoors.

Maybe @ReikoX have some input? 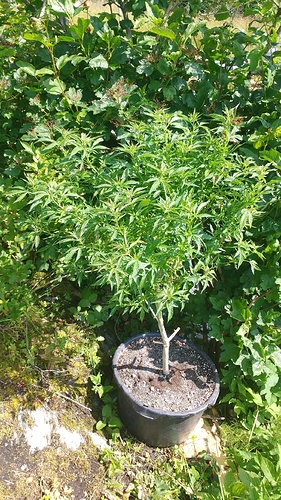 There is probably some good in it

Roots are said to be beneficial for salves. I keep mine for that purpose but have not tried it yet. Not sure about eating them, I think I’d pass.

Roots do have an anti-inflammatory properties when they are washed and dried out and chopped into small pieces (coffee grinder works wonders) Then they are place in a crockpot along with coconut oil to cook down (takes like 18hrs until the batch smells like nuts and roots have lightly browned. Strain off the roots and use the oil to add to other topicals or pain cremes that you make from the flowers. You can also save and use the leaves in the crockpot also with the roots at the same time, I even add good bud for the release of THC in my cremes.

I never throw my roots away once they are dried they store nicely in a glass mason jar for long term storage, just dry them about 2 weeks in open air, and make sure they are completely dry.

I’ll try and find an article I read that explains how cannabis flowers are said to be the new superfood. It’s packed full of nutrients and other beneficial components.

So, yes, the plant is useful in so many ways. Here is just one Google search for “is cannabis the new superfood”? Google Search

The answer is yes.
You can do anything you want.
Just remember karma; and that giving is better than getting.
Some more information would be nice.
Do you want her for medicine? Or recreation? Or for joy of growing
That’s a healthy specimen there.How old?
How was the last smoke off her?
Looks like she’s about to flower, again?..

You could make butter with the leaves, but it wont be very strong. As @STIGGY said, the roots are awesome for tropicals, but I wouldnt advise eating them.

PSam and I have had talks about ingesting the roots and have seen people in the past use to use them orally to relive different ills, the info was very scarce and not very informative as far as dosage and safety use,
I would only use them topically until more evidence comes forward .

The cannabis root is the most underutilized and underestimated part of the plant. People don’t usually pay any attention to it, but it does have its share of purposes and benefits. We already make use of almost every single part of the plant: leaves, seeds, flowers, resin, fiber. Given that, it’s still kind of hard to believe that we might have missed something along the way. During historical times though, this was very different. Cannabis root was highly valued by our ancestors as they used them for medicine in animals as well as humans.

The Roots Of Root Therapy

Hemp root was first recorded in Chinese medical literature some 5,000 years ago. The document states that the juice of hemp root is an effective diuretic. It was used by ancient Chinese to stop hemorrhage in women after they gave birth. Aside from medicinal uses, other Chinese literatures also document the use of hemp root in manufacturing gunpowder.

Around 77-79 CE, the Roman historian named Pliny published known uses of hemp root in his book Natural Histories. He said that when hemp root was boiled in water it was useful in treating joint stiffness as well as gout and similar disorders. Pliny also wrote that raw hemp root could be applied topically to soothe burn wounds.

Between the 9th and 18th CE, manuscripts in Azerbaijani also documented the popular uses of hemp roots as a decoction to treat wounds and cure fevers. It was particularly used by the local Azerbaijani to treat toothaches, ulcers, and abscesses.

Throughout history there have been other little known documented uses of cannabis root. While herbal uses from the ancient and medieval times have survived to present day, it seems that the numerous useful properties of cannabis root aren’t mentioned as often as other plants. But that doesn’t diminish the value of the humble hemp root.

Since @PSam started his experiments with these Natasha Ryz has written a paper about the historical use of cannabis roots. Here is a link for reference.

Cannabis Roots: A Traditional Therapy with Future Potential for Treating...

Introduction: The roots of the cannabis plant have a long history of medical use stretching back millennia. However, the therapeutic potential of cannabis roots has been largely ignored in modern times.Discussion: In the first century, Pliny the...

@GMan Thank you for the search idea, will deff read up!

@Jay Thank you for the input. I’ve spent quite an amount doing searches, which only led to more questions, that’s why I created this post

To answer your questions: my mum want to make oil extraction for the health benefits of the plant, and also the possibility to use in cooking, same goal.

I guess HE is 18 - 19 moths old, see my noobish first try where this specimen is being abused.

Hi there! New member here, and want to introduce myself to the community

The interest for the cannabis plant came natural for me as my father was an gardener, and as a child observing plants grow and thrive in the greenhouse gave me an early start. Lately smoking cannabis gave me much needed pause from an active brain (ADHD) In 2018 I started to read several grow bibles, and I know for sure that hands down cannabis are my absolutely favorite plant within horticulture! :sli…

I’ve only dried some leaves (tops) and smoked, gave an lax feeling actually.

I guess it will flower eventually when the days get shorter, right now I let nature care for it.

ill check out the link!

@STIGGY Thanks for the input

I find history regarding topics like this quite Interesting!

I will say from experience I have bad neuropathy in my feet and lower legs, it use to burn me so badly I cried myself to sleep if I could get some. I met PSam during this time. PSam helped me make my 1st Topicals from cannabis using leaves and buds in coconut oil and I applied at night To my surprise the Balm worked better than any pain pills I have ever used for it.
Now after Sam and I talk we added the Roots into the formula and I did the crockpot method 18-24 hrs on warm in crock and I added a few extras along the way. I now have the best Balm for treating my pain, I even can miss a night and still sleep like a baby, My feet still hurt, but not like they did , I was ready to have them chopped off.

A bit more clarity from my side:
Mum want to take the whole plant and gently boil it with water, sift it, and add the juice to coconut oil. I told her that the extraction process is a bit more complex than that.

I have 12 cuttings that I’ve used for educating purposes in areas like watering, nutes, light, grow medium etc. to be able to understand this wonderful plant better. The plan was to get rid of them eventually, but she wanted to use them, where it led to this topic.

Apriciate all the feedback guys, you rock!

@STIGGY Sad to hear about your pain mate. My second thought goes to others with similar pains which get prescribed medicine that won’t help them

Great to hear that you got proper medicine!

Shes close. She can do what she said except boil it with water and coconut oil. Then freeze the water to seperate it from the coconut oil.

Another possibility is juicing it. There are many benefits to this, but getting high isn’t one of them.

Shes close. She can do what she said except boil it with water and coconut oil. Then freeze the water to seperate it from the coconut oil

I had a hard time understanding what you meant, sorry

Did you mean that she can, or can not boil it in water?

She can boil it in the water and coconut oil at the same time. The cannabinoids (THC, CBD, etc.) will not dissolve in water, you need some oil.

The easiest recipe would be to dry it then throw it in a crock pot with enough butter to cover it. Add some water to the mix and let it go overnight. Strain it through cheese cloth and put the mixture in the freezer. The water will freeze into ice and can easily be removed from the plant matter.

Or you could try making tincture