So, it’s time to start my next grow seeing as how vacation time is over. This is a new experience for me as it’s my first time attempting photoperiod plants. I’ll be growing in soil this time around, a ProMix mixture with perlite, composted manure, and mushroom compost in 5 gallon fabric pots. Three plants in a 2x4 tent with a total of 320 watts of LED lighting in the tent.

I’ll be growing one each of, all of which are feminized seeds:

So, earlier this past weekend, I dropped three seeds into glasses with water. They all showed signs of cracking the next day and were transferred to wet paper towels. They stayed there for 2 days and when the taproot was long enough, transferred to their final homes. The next day, all three were popped above soil.

Only problem thus far was the Swiss Skunk sprout had helmet head and when I removed the shell casing, the cotyledons fell off as well. It appears to still be alive, but as a backup I popped another Swiss Skunk seed directly into soil in the same pot. If both survive, then I’ll prick out one of them and transfer to its own pot and just grow four plants. We’ll see what happens. 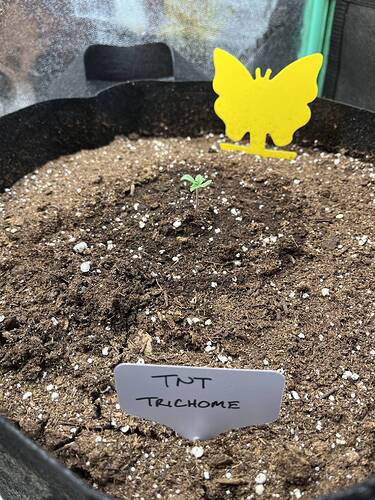 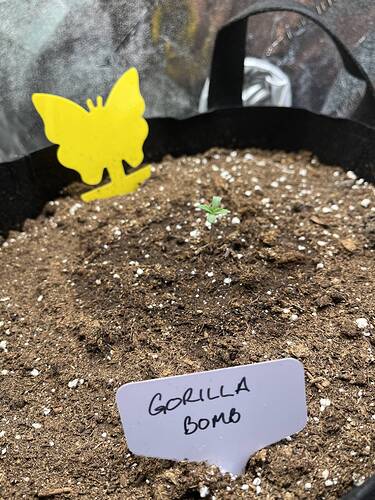 Swiss Skunk (hard to see in the first pic, second pic is a bit closer, and you can see how tiny it is, but it’s still growing!) 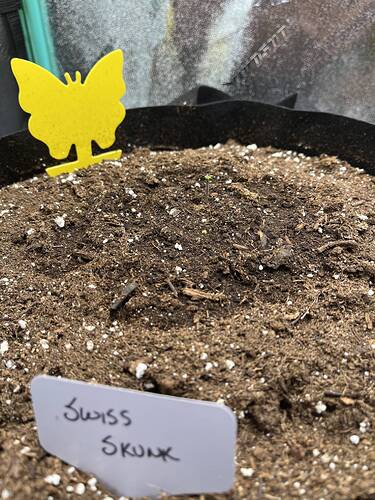 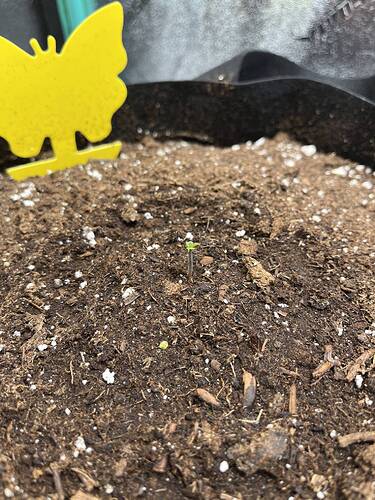 Group shot of the tent. 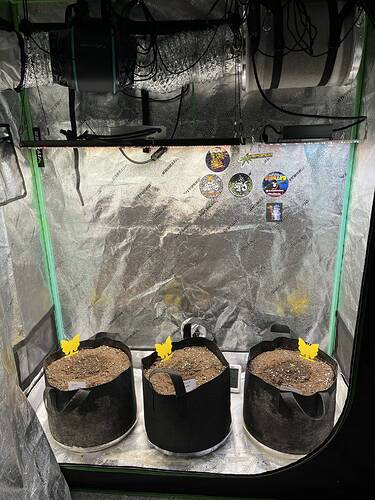 Nice and clean setup! I’m along for the show!

I’ve had good success with autos in the past, and am looking to have at least a pound from this grow. It should be doable as I’ve had just shy of a pound from two autos and this time I have three photos and have added a small supplemental LED to the tent. Fingers crossed!

Some additional information regarding this grow. 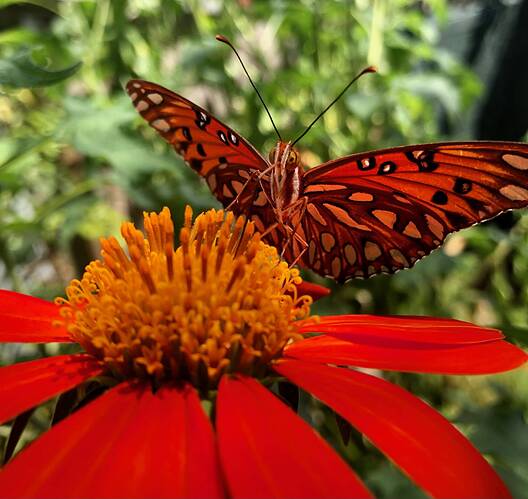 One last bit of info on this grow and then I’ll shut up until the next picture update. I intend to utilize @DougDawson’s generosity with pollen and pollinate a single branch on each plant with his BOG Sour Bubble BX3 pollen he sent me a while back. Should end up with some good crosses assuming everything goes to plan.

Count me in for checking in from time to time!
I am looking forward to those 3 plants overgrow-ing that tent

Short update from the weekend:

Been watering the girls lightly when dry, and all are doing well. The Swiss Skunk seed I dropped directly in the pot popped and was looking better than the stunted growth. So I pricked out the stunted plant and put her in her own, smaller, pot. If she survives, I’ll either give her away, or use her as a pollination plant.

So for now, I have four plants going: 2 Swiss Skunk, 1 Gorilla Bomb, and 1 TnT Trichome.

All plants are doing well. I’ve started watering with a weakened MegaCrop mix. Roughly 1/4 tsp of MegaCrop for 3 qts of water. The runt is just getting plain water at this point. Seeing if I can get her back on track. Plan is to top these in the next week or two. 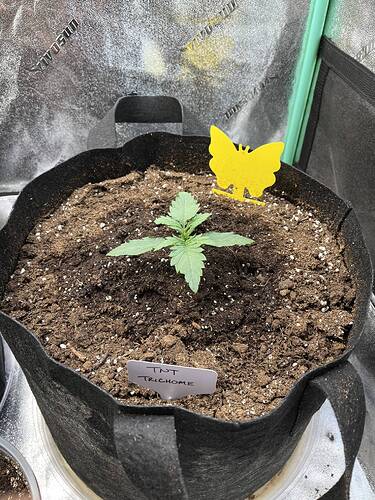 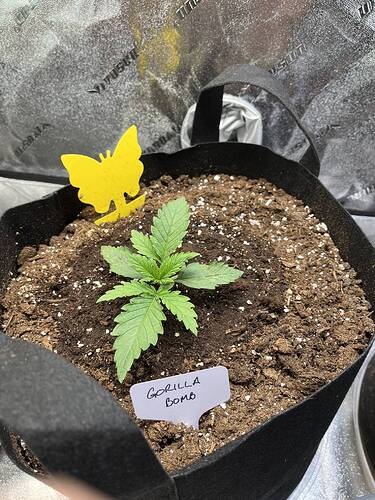 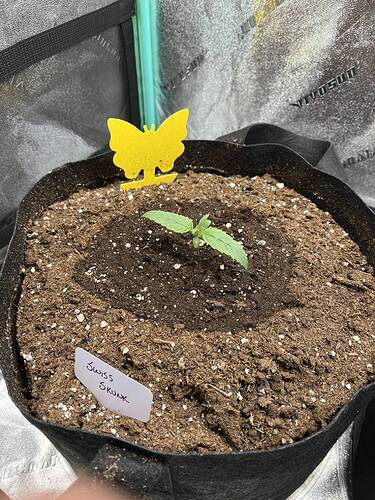 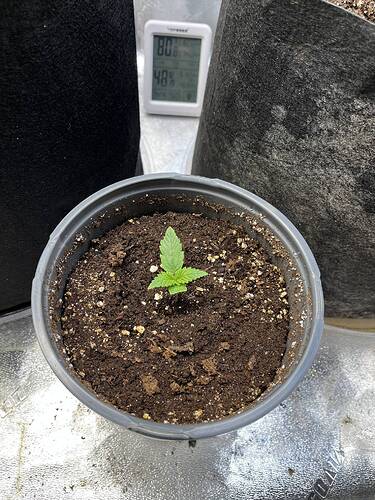 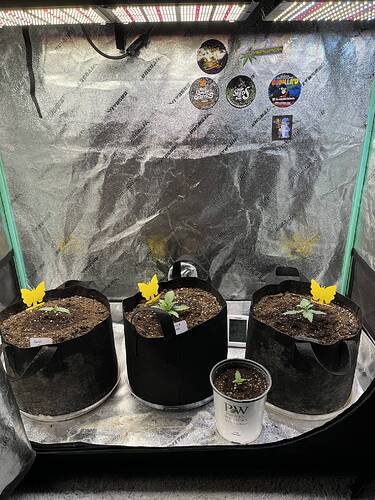 It’s getting bombing in here

So far things are coming along well. Even the little stunted Swiss Skunk is making a comeback!

Short update on the girls:

All four of the plants are doing well. The three in the main pots are getting big and bushy, and I’m aiming to top all three at the end of this week or middle of next week. The stunted Swiss Skunk is growing well, and I’ll probably have to up-pot her since I’m planning on doing a 5 week veg on the main plants and she’s only in a 2.5 gallon pot. But, on the plus side, that means I can use her as the seed plant for my BOG Sour Bubble BX3 pollen rather than just a small bud on the main plant.

Due to the stage of growth that these plants are in, I decided to lower both lights to ~24" from the canopy. They’re pretty robust and should be able to handle the increased light intensity. Will continue to lower slowly until they are around ~15" from canopy in order to not stress them out.

Quick question for the crowd. Is there any consensus on, or anybody who performs, pot rotation within the tent to give all plants equal lighting opportunities?

In my situation, I have a fairly nice LED light and a crappier, small supplemental light. They fit end-to-end lengthwise in my 4x2 tent. That means that two of the three plants in then tent are directly under the main, nice light, and one is directly under the supplemental light. I would assume that the two get better lighting than the one, so today I rotated them, and plan to do so every week or so in order to give them all equivalent lighting. Does this make sense? Is it worth it?

I do it everyday. I have a old light and middle good, sides not so much. It does make a difference.

Awesome, thanks for the input!

I even rotate my plants to make sure they get lighting during flower on all sides. 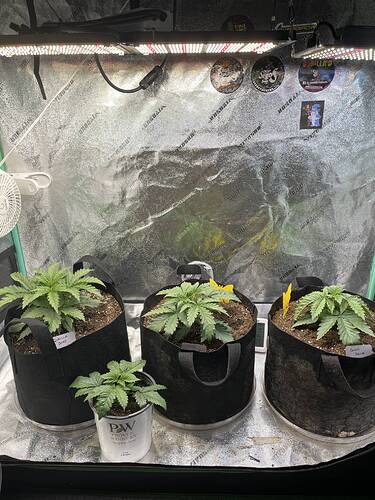 All are growing well, and the three biggest will get topped this weekend or early next week.