Review of the Tuopuke Rosin press

For larger amounts, I will make ice water hash first, then press the hash. Two grams of hash will yield at least a gram of high quality rosin. I’ve even presses each bag seperately and the difference in the micron sizes is noticeable.

With flower and pressing the motto seems to be “less is more” and I speculate that is because the smaller the amount the more pressure it puts on them.

Going to try this with kief next week when I get near my buddies unit which is bigger than my @roux press.

Pretty much, just think of it this way, the rosin has to go through all the material befor it leaves the plates. The less material, the cleaner it will be once it comes out.

Here is all the pressed material I have. I’m going to grind it up. I’ll give pressing it another try after, but if the 1st press doesn’t make good, then I wash all of it is dry ice and Everclear. That method of extraction produces a good quantity of concentrate.

I’ve even presses each bag seperately and the difference in the micron sizes is noticeable.

@ReikoX, I did that as well with my scrap leaves. I had 160, 120, 73, 25. Normally I throw away the hash from the 160. I kept it this times. It made more goo than I thought it had. The 120 and 73 micron bags had very little in them. The 25 micron bag gave me the largest harvest and the most goo. Interestingly, the rosin from the leaves, tastes like leaves. Bubble hash and dry ice has from veg leaves always tasted like it came from veg leaves. I just thought it was from the plant powder mixed it with it, but the wax from the veg leaves tastes like leaf also.

With flower and pressing the motto seems to be “less is more” and I speculate that is because the smaller the amount the more pressure it puts on them.

Pretty much, just think of it this way, the rosin has to go through all the material befor it leaves the plates. The less material, the cleaner it will be once it comes out.

That’s been my thoughts on the matter as well. I am going to try some even smaller quantities to see how they do. Also, I have a 1" diameter pollen press coming from and I want to see if making the 1 and 2 gram pucks from that will press cleaner, the larger diameter will make a thinner puck.

@legalcanada, yeah, I’m an idiot, it was a half.

I’ve been doing some experimenting the last week or 10 days. I had an ounce left of flowers I had designated for pressing and ran a dozen, 1 gram test pucks and four 2 gram pucks (I threw a few extra grams in). I only pressed each puck once because, for me, the following presses vary greatly from puck to puck. I recorded measurements of the puck before pressing and after pressing. I weighed the parchment paper before and after pressing. I also recorded the temp of the top plate before pressing.

I used 2 different size pollen presses, 14mm and 20mm diameters (I thought I’d ordered a 1" diameter, but I remember that press had too many negative reviews, I had ordered the 20mm instead). I pressed 3 sets of four 1 gram pucks of each wet, moist, and dry. I ran two 2 gram pucks of moist ground up flowers one of which was 14mm and one was 20mm and two more that were dry, also one 14mm and one 20mm . Then I was out of material, so further testing will need to wait.

I have found a few things that were news to me (when it comes to pressing dab, it’s mostly news to me), maybe some of it is new to you as well. This is what I found so far:

One I mentioned before in my ejuice thread, this is how tight your source material pre-pressed. If it is not tight enough, you get so many plant bits in the wax that it reduces the yield and makes a huge mess. The worse the mess, the more difficult it is to collect the dab.

Another item that effects the press yield is how tall the pressed puck is. I found that over 10mm (3/8") tall, the yield went down. If the puck is too thick, you can’t press it all the way out, if you try, the parchment gets destroyed where it contacts the puck, leaving bits of paper in the goo and on the cookie. These bits are baked on the cookie making it a real task to remove them and removing the goo from the small paper fragments is very difficult as well.

Lastly, I found that too big of a puck tends to trap the thc in the plant material, leaving the cookie (flattened puck) fairly moist and flexible. You can feel the THC on the surfaces of the cookie. This information was mainly arrived at by the two 14 gram pressings I attempted several posts back. I repeatedly tried to press the puck material multiple times, The yield was ridiculously small each time. I will try a large amount again sometime to determine if I break up the cookie into small pieces after the 1st press, the yield improves of if the goo remains in the plant matter and needs alcohol to remove it.

I found that a 1/4" tall puck gives the best amount of goo and moist weed also give the best yield. When I say moist, I mean just damp enough that you can make a dough ball of it and it almost wants to fall apart. The wet samples made about the same as the dry. The 1/4" puck pressed down to the thickness of a piece of paper or less.

Pucks thicker than 10mm also left a fairly thick cookie. When the cookie is too thick, it seems it is still retaining the cannabis gold.

There was little difference in percentage of dab between the 1 gram and the 2 gram pucks. This leads me to wonder if larger volumes of weed could be pressed if the outer size of the puck was larger, but the thickness stayed around 1/4". I have no other press molds with which to form larger pucks, so for now, it is just speculation.

There may be other factors also besides strain and the factors I mentioned above. I ran out of material and this was what I found so far.

Results:
The 1 gram pucks averaged 8% dab. It didn’t matter which diameter or thickness.
- The moist samples had a high of 9% and a low of 8%
- The wet and the dry samples had high of 8% and low of 7%

I wish my scale went one more decimal place because I am using light samples. If I could do 10 gram samples that pressed flat, I could get much more accurate percentages, but may lose some yield do to the size. If I can get a larger pre-press, I’ll try larger pucks.

Next, I’m going to weigh up the cookies en masse and grind them up to see if I can get more from the press or I need to alcohol wash it.

Edit:
PS I forgot to mention, there seems to be NO difference between the way the ground weed and the unground weed pressed. Both types worked the same. 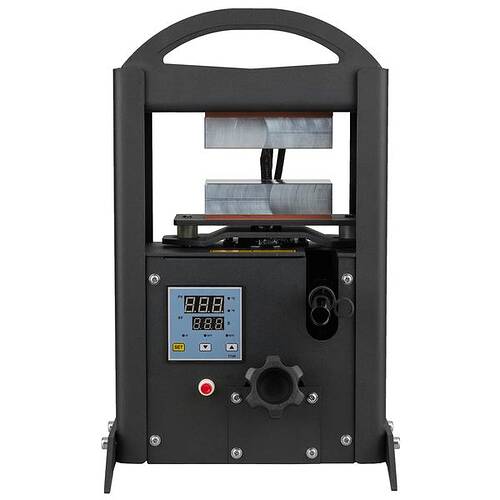 do you know how much shipping is? it won’t give me the estimate without filling out all my contact details