Anybody have suggestions for a first-time rosin press? I’ve never done a dab in my life (anything that requires a blowtorch seems a little, uh, druggy to me haha), but the past couple weeks I’ve been thinking that I should absolutely buy a rosin press. I honestly don’t know why it never occurred to me until now. Maybe quarantining got me bored. Or maybe I’m just sick of filling freezer bags with trim, putting it in the freezer and saying,”I’ll make hash out of that in a couple weeks,” only to throw it all out after it’s been sitting in my freezer for a year. I dunno.

Anyway, I’ve been researching presses for a week or two now, but I’m no closer to making a purchase than I was when I first started looking into them. In fact, I feel a little more confused than I did when I first started researching them. The first thing is, I don’t want to spend more than $600 max. Mayyyyyyybe a little more if I knew what I was getting was legit. I’d prefer to keep it in the 4-500 dollar range, though. Also, I’m pretty sure I don’t want a manual press. Seems to me like the hydraulic ones are better, but if I’m wrong, lemme know. Also, it seems like anything with plates smaller than three inches are no good? That’s just based on the dozens of reviews I’ve read of presses over the last couple weeks. Also, I really don’t want to build my own. Something that I could just take out of the box and start using would be ideal.

So yeah, I really don’t know. Anybody who wants to chime in, I’m all ears (eyes).

Go to @ReikoX workshop rebuild 2020. He tells you how to make one. He made his.

If I were to do it again, I would just buy the plates online and get a 20-ton press locally. Check out Low Temp Plates. They are about $600 (not including the press), but nice quality plates.

This is what I use,

There is a great video on youtube, by a channel named Mr Canuks Grow. He has a tutorial on how to use a flat hair iron and some C clamps, ,for rosin presses. which works surprisingly well, atleast in his video it does.

FYI old freezer trim still makes good hash don’t throw it just cause your wife said use it or loose it .

Here’s my personal press old school crank , plates and temp control are key .I wouldn’t recommend if you were wanting to press pounds but it does the trick for fresh squeezed dabs 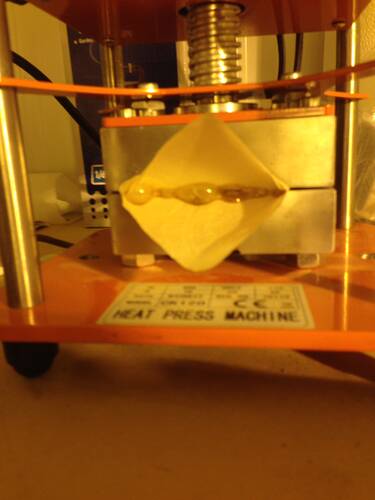 @ReikoX Bear in mind that in addition to not being the most handy dude around, I also have zero patience. Like a couple months ago, the zipper on my tent got stuck. After trying to get it unstuck for a couple minutes, I was just like,”Fuck this, I’m gonna buy a new tent…” haha! Luckily, I asked my girl to see if she could get it unstuck. Which she did. In like fifteen seconds.

How difficult is it to build your own? Also, if the plates cost six hundred bucks, then I’d still have to buy a hydraulic press? How much is a decent one of those? And what other stuff would I have to buy? Like I said, I really don’t wanna be spending fifteen hundred bucks.

Haha, my “wife” (girlfriend, actually, I’m never getting married) doesn’t have anything to do with this. She’s incredibly tolerant of my growing obsession. Although when I bought a second fridge to store my seed collection in a few weeks ago, she did say,”Can we put all this frozen weed in there now and get it out of our freezer?” haha!

It’s more a matter of me being lazy. I don’t feel like busting out the five gallon buckets and ice and stirring and all that goes into making ice hash. Plus, cleaning off the bags after. It’s a pain in the ass.

I notice your press just says “heat press machine.” Should I search that instead of “rosin press”? Also, how’s the manual press work for you? Almost every manual press I’ve looked into has mentioned something about having to bolt it to a table or bench? Do you have to do that with yours?

Think all you need is a standard H-frame press, maybe an A-frame would work too, like 6-tons max… and then press plates. The basic press you should be able to find for around ~$100. The plates will run you 200+. Think I spent close to 300 on mine off ebay. Just some 3x5 plates+pid controller.

Okay, sweet. I’m going to look into this. And you think your press works just as well as pre-fab or whatever presses?

I’ve not used a pre-fab kit or anything before. I’m doing the same thing I wrote, bottle-tech as they call it, and it is all hands-on/technique to get good returns. A press with a gauge of some kind would make it easier for repeatability and getting a process dialed in, but you don’t need it.

Now you might get a better pid with more accurate temps going with a prebuilt system, or you might not. My ebay pid is about 10 degrees cooler what it says for instance. Some pid’s/plates will do better than others.

Here is a cheaper version of the plates on Amazon. I’m sure they are as good as what I made… 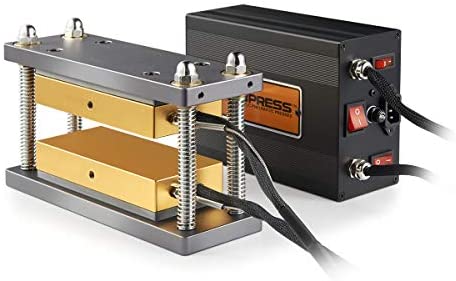 And pair that with a 12-ton hydronic press from Harbor Freight like this one. Don’t forget your 20% off coupon.
https://www.harborfreight.com/12-ton-shop-press-33497.html

yeah thats basically the new version of what I bought. Should work perfect

And what other stuff would I have to buy?

You will need to buy parchment paper, a scraping tool, and a container to put it in. You may also want to get some rosin pressing bags, and a dab rig if you don’t already have one.

Yeah, I knew I’d need to get the parchment paper, scraping tool, bags etc, I just meant what else would I need to get for the press itself. So all I’d need are those plates in that link from Amazon and the press itself? I like the plates you suggested, 3” x 7” is the biggest I’ve seen for inexpensive presses. I’m not planning on doing huge runs or anything, just personal presses for me, but it still seems like having bigger plates makes things easier.

The only thing is that press is frigging huge. I’m trying to figure out where exactly I’d put it. That’s the one thing I like about these “countertop” presses. They’re small. I’m thinking I could put the press you suggested in my garage, but it’s already kind of full in there. We’ve got all of our weights and bench, a full-on rack, washer and dryer and just a ton of other stuff.

Also, sorry for the completely ignorant question, but how exactly does the configuration you suggested work? You put the plates on the press and then just squeeze down? I’m at a loss haha.

Yeah, that’s pretty much the gist of it. The plates have a controller you plug in and set the temperature. Then once headed you squish. There are probably 1000 different ways to squish. You will just have to use YouTube and some experimentation to see what works best for you.

Okay, cool. So this is only gonna cost like $500 altogether? And yeah, I’m factoring in the 20% off coupon haha. Thanks for that, btw. .I think I’m gonna buy these. Should I tell them @ReikoX sent me? Will you get a little money off next time you purchase something?

Harbor freight 20 ton jack and buy plates from Dulytek. For under 500 bucks you can have a really nice press.

I was JUST looking at that. The Dulytek 3” x 8” plates. Sorry, @ReikoX but those plates from Amazon are made in China, which makes me leery. I’m thinking the Dulytek instead. Thanks for turning me on to the whole DIY thing, though. It’s obviously cheaper and probably better than those countertop things.