Are you breeding? Creating any Landrace Indica sativa crosses? Have you Identified any traits that you know to be dominant or recessive? This is meant for those who breed and doing crosses…It’s a start…but I’m sure you’ll agree…“the less than nothing” you’ve added doesn’t push this along…chuckle

Some other examples of cannabis traits.:

…:and how about Terpene profiles? (Some growers say certain strains just over power whatever they’re bred to…I believe some have mentioned certain Kush’s)

Another thing I’ve noticed on some of my plants…“Auto-topping”…plant will top itself…Is that a breedable trait?

What known genetic influences can you add?

You have my interest.

He details each of these. If you haven’t yet absorbed this book, I highly recommend it. 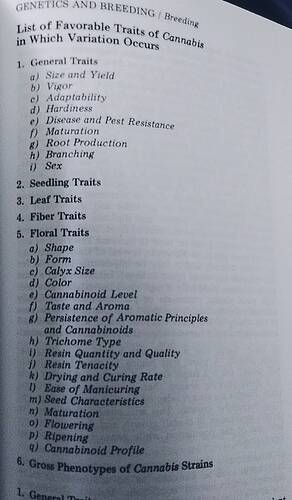 You’ll find links to pdf “copies” here on OG. They are good for checking it out, if libraries are too old-school (aka germy.) I fight the urge to post pages from it answering or reframing people’s questions all the time.

Here’s another Cannabis article I came across discussing genetics…including Polyploid.

I was poking around too to track down genetic predisposition of hollow vs solid stems. Most claim hollow stemmed varieties to be more potent…
I’m running some f2’s of a webbed strain I’m working on…Most of the stems are hollow that I’ve found while topping, but have found a few that had a solid core…

You don’t see the irony in that completely useless statement at all, eh?

@MrToast good idea, this will be useful for people looking to isolate traits!

Also I’m sure alot of these traits haven’t been properly documented, but by going through some of the old stories of people breeding famous strains it might be possible to discern dominant/recessive traits.

@Heritagefarms
Hearing that you too may have keen interest in the genetics of Cannabis…and just wanted to give you the heads up on the thread.

Good thread brother. I will be listening to what other people have to say. You never stop learning.

Thx buddy…
I enjoy genetics from school…long…long ago.

I know there are a few people here, far smarter than I…Hopefully we can stimulate some good conversation and share ideas.

Hi @AllOra, thanks for that ref.
I have added Clark’s traits to a plant ‘check list’ I’ve been working on.

Good link @MrToast!
Starts off a little thick and turgid but got very interesting in the last sections on light and rejuvenation.

‘Starts off a little thick and turgid’