Has anyone else thought of using weights before? 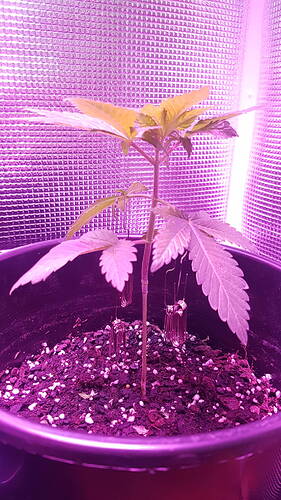 Or what it really looks like. Giving the girls earrings?

Haven’t done it my self but I know others have . Seen it done on outdoor plants .

You should be bending down branches though . I don’t see the point of hanging weights on leaves .

Easier to just bend and tie-down

The paper clips unfortunately cant reach the bucket edge. Like just a little too short. So rather than bending to the the right size i though of using weights.

Well until she gets bigger.

Your paper clips are hanging off leaves . Why ?

Yah im wondering the same thing as Floyd. Are you just messing around with the weight on the leaves? I think in order to LST you have to bend the main growing tips (in this instance, there is only one, the top of the plant)down below other nodes of the plant so it sends auxins and hormones to other areas and nodes and sends them energy now as if they are the new top or tops of the plant.

the paper clips for basically weights to pull the leaves down. thus allowing the fan leaves to grow ‘more horizontal’

it just cant reach the edge of the pot. and im too lazy to use and type of ‘string’

another reason is to expose the main stalk, making the environment cooler and the fan to circulate air.
because naturally plants, if they find it cold, will grow shorter inter node spacing and would ‘want’ to hug the main stalk. (like when its cold at night. if outdoors), by giving it resistance.

re: nodes. because its a young plant, i tend to remove the small nodes, allowing the plant to use the energy to other places. coz when it comes to harvest time, the ones at the beginning (lower nodes) wont be able to receive much light anyways, i think kyle kushman stated, that if the plant has only 100% energy to extent, it will try and cover the whole plant (nodes) evenly, so if you remove certain sites that are in less favorable conditions, it will use the energy that was ment to be for it to another node.

but honestly thought it was interesting, wanted to know what others thought.