There is (at least for me) very interesting new product on the market: pH stabilizer based on ionization.

Price seems to be acceptable… ($200 for 70 Gallon version) Has anybody tried it already with success?

Those are interesting. @SuperiorBuds is using it with success from what I understand.

This is the thread:

@Larry3215 and I have spoke of the Amberlite ion-exchange resins in the past, so I figured now that my res ph is stable and the plants are getting a bit bigger it was time to break out a new toy... [image] [image] I went ahead and oversized by picking up the 70 gallon unit for my 35 gallon res. I've only been having to give a small squirt of pH down every few days lately to keep the pH in line, so I am going to drop this in tonight and over the next few days I'll have some solid data o…

Also, we had looked at ion exchange resins in the buffering thread at one point as a comparison against chemical buffers:

Experimenting with the Megacrop PH and Buffering

This is related to @Larry3215 's Adventures in Hydro #2 - LP Aero/NFT mash-up - or - switching to HPA? From Larry's experiments, there are some confounding results on how the PH is generally behaving. This has prompted me to start a series of tests to see if we can determine the buffering regions inherent in the Megacrop formula. Then, we'll try the same with the addition of a variety of buffering formulations. These tests are ex-situ a hydro system. Thinking of the following series or som…

I wonder if it would just be cheaper to buy an Arduino, 2 peristaltic pumps, and a pH sensor and just make a pH pump. There is probably code written for it already as well. That way you would always have the pH set to where you want.

As of today I am on day 46 without a reservoir change or a single drop of pH up or down. I have topped off with RO water every few days and concentrated nutrients as needed to keep EC in check, but I have let the Torus Hydro control the pH entirely on its own. Even with RO water that comes out around 7 my pH has stayed consistently between 5.8 and 6.2.

Time will tell how long it can maintain 35 gallons of water. (I did oversize and bought the 100 gallon unit.)

I wonder if it would just be cheaper to buy an Arduino, 2 peristaltic pumps, and a pH sensor and just make a pH pump. There is probably code written for it already as well. That way you would always have the pH set to where you want.

Yes, that would probably work. I simply have to drop a 6" bar into my reservoir. This is also an ion exchange which allows the reservoir to be used longer. I would never go over 2 weeks between res changes before, but as I said above I’m now over 6 weeks with no signs of issues. (Jacks 3-2-1 has to also be credited here, since the res is still totally clear.)

So far I am sold on the Torus Hydro. Even if it only lasts a single run it has still eliminated any chasing of pH while still drifting through the entire range for the best nutrient absorption.

No problem. Thanks for links… I think that this tool is very interesting and deserves its own topic… And some members might have missed it in @SuperiorBuds’s grow topic.

@Northern_Loki
If I’m not mistaken, you bought Amberlite CG50 some time ago.
I tried to find a topic in which you tell how you experimented with it. But I can’t find this.
Can you tell me a bit more if you bought it?
How did you apply it?
And what were your findings?

Experimenting with the Megacrop PH and Buffering

This is related to @Larry3215 's Adventures in Hydro #2 - LP Aero/NFT mash-up - or - switching to HPA? From Larry’s experiments, there are some confounding results on how the PH is generally behaving. This has prompted me to start a series of tests to see if we can determine the buffering regions inherent in the Megacrop formula. Then, we’ll try the same with the addition of a variety of buffering formulations. These tests are ex-situ a hydro system. Thinking of the following series or some s…

But, it was more of a lab bench / comparing against conventional buffering. So, a specific amount of CG-50 was added to a test formulation and then titrated against buffering capacity. Wasn’t tested on a live grow system but the intent was to show that you could while comparing different buffers. In real life, you’d put it into a filter bag of some sort and place it into your reservior.

The torus hydro is essentially the same thing but packaged for use in a hydro system. This looks nice. Coincidentally, it seemed to have been released around the same time we were testing the resins.

PH Perfect (advanced nutrients), as an example is probably using something similar to a weak MES buffer. We had also tested MES in the above thread. It is, perhaps, the best traditional buffer for this application but it is also relatively pricey. Capable of even more apparent buffer capacity than the CG-50 resin but it’s disposable.

I also wanted to buy it. But I was afraid Amberlite CG50 was too powdery; not enough pearl shape. And to buy it just like that, it was a bit too expensive.
I still looked for similar resins, but because there are so many on the market with exactly the same descriptions (weakly acidic cation exchange resin) I never dared to do that.

The Amberlite CG-50 is quite fine and would require a fine mesh to make use of it in practice. And, yes, there are some alternatives with different brands and mesh size. But, these resins don’t seem to be easy to obtain at a reasonable price-point unless buying in bulk since it’s either 1) laboratory use (expensive) 2) large reactors (large quantities).

Some investigative research may lead you to a better price point. I wouldn’t be afraid of some of the other brands/versions if you get the right type. You can try running a titration experiment first (similar to what was done in the buffering thread).

In the end, the most straightforward way to get into trying the resins is to obtain a torus hydro.

Thanks!
Yes, the Torus hydro might be a good idea.
But I like to make things myself as well

What really p*sses me off about the Torus is the outrageous price they ask for the ‘recharge’ fluid.
It is probably just diluted hydrochloric acid. But they ask $ 80.00 for a liter.
It’s like HP selling you a printer for a bit lower price and then ask a fortune for their ink cartridges.

I found these resins https://www.seplite.com/weak-acid-cation-exchange-resin-mc290.html
They are similar to Amberlite CG50 according to the manufacturer.
The particles are about 0.3 - 1.2 mm.
The price is about $ 350 for a liter. (without shipping and taxes and such)
A liter will be around a kilo. (I don’t understand the difference between ‘bulk density’ and ‘density’ on their page)

Yes, reconditioning the resins is likely cheap and using commonly available chemistry. Though, I can’t say that I have actually tried that myself.

The price is about $ 350 for a liter. (without shipping and taxes and such)

I recall searching over the period of several days to find a lower-cost source and I do remember they are out there. But, I can’t recall the details. It wasn’t through laboratory suppliers for certain, more industrial.

Whatever the case, if you’re using something other than CG-50, I’d opt to start with small amount to verify it’ll work for you on the bench. It would be a shame to get a large quantity that isn’t right for the application since this description of this stuff is confusing.

I’ll be following along. I love the DIY stuff!

Can someone give me the quick run down. Does the whole unit need to be replaced. Or is there cartridges that need replacing after awhile. 200$ every 3 months is a lit much for me.

But, I can’t recall the details. It wasn’t through laboratory suppliers for certain, more industrial.

350 dollar for a kilo is a lot, but it is still cheaper then the 1000 or 1500 that I saw from renowned chemical companies.
So if you have any leads for cheaper resins, please let me know.

I guess it must be possible to send the official recharge fluid to a laboratory and have it analyzed. I guess that one can not do this himself?
I have a friend who works in a laboratory in a hospital. Do you think they would be able to do it? The recipe for the fluid must be simple.
Dr. Daniel Fernandez who wrote about this 10 years ago, also said that diluted pH- fluid would do the trick as well.

@Skiball
The unit is like a closed capsule as you can see on the website of Torus Hydro.
Inside this capsule, that you can’t open, are the resins.
When you want to recharge the device, you have to place it in a small container with the special recharging fluid for a few hours. After that you rinse it with clean water and you can use it again.
So the device itself you don’t have to replace. But you have to buy new fluid every couple of grows.

Very interesting. I might give this thing a go. I’m switching to ebb & flow in the next few weeks, and a 35gal should work just fine.

What do you do with the “original” version? Just chuck it in the reservoir? It looks like the inside mesh screen of an inline filter… wonder if it would fit a standard inline filter and save me $30.

The inline filter version is nice, but not really needed as I understand from growers who have the original one.
Als long as the water touches the device and there is some circulation, it should be ok.

very cool, thanks for posting, I will check this out

Some people posit that you should let your pH swing through a limited range, so that you can get the optimal uptake of more nutrients at different pH values. Is there merit to that idea? I feel like pH swing can be a little stressful.

Letting the pH drift is a requirement in hydro since pH is directly tied to nutrient uptake. When we’re talking about a swing we’re saying between 5.8 and 6.2 so a small range. Generally people will let the pH drift upwards and then change the res, resetting back to 5.8. There’s no stress in that, it’s a natural process. 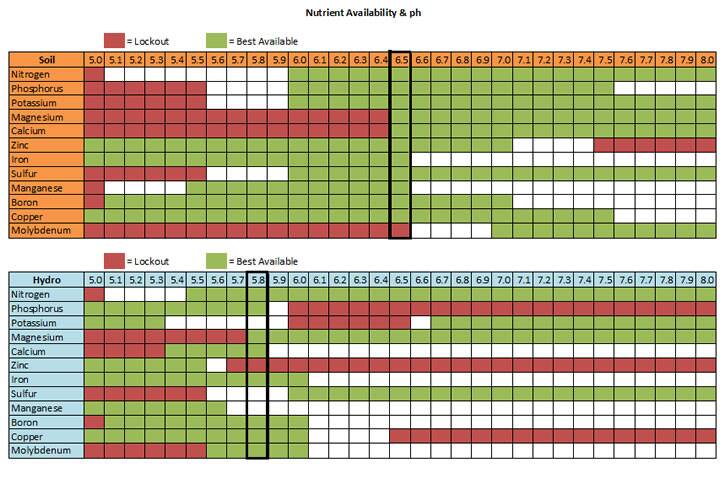 With the Torus Hydro I don’t have to worry about it – I simply watch the pH to see when it starts to get out of the “Goldilocks Zone” and then I know it’s time to recharge the unit. One less thing to manage (or for someone else to screw up while I’m away).