Experimenting with the Megacrop PH and Buffering 📈

From Larry’s experiments, there are some confounding results on how the PH is generally behaving. This has prompted me to start a series of tests to see if we can determine the buffering regions inherent in the Megacrop formula. Then, we’ll try the same with the addition of a variety of buffering formulations. These tests are ex-situ a hydro system.

Thinking of the following series or some subset of these:

Initial test is simply to baseline the initial PH, check for drift, and a PH up and PH down.

Made up ~3 gallons RO water: 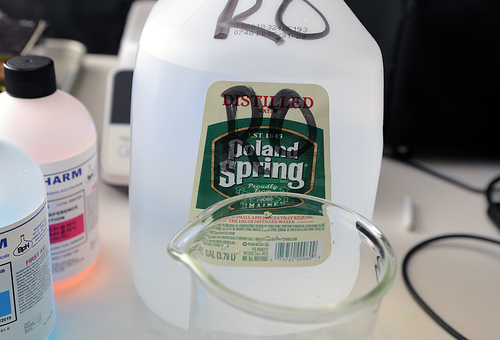 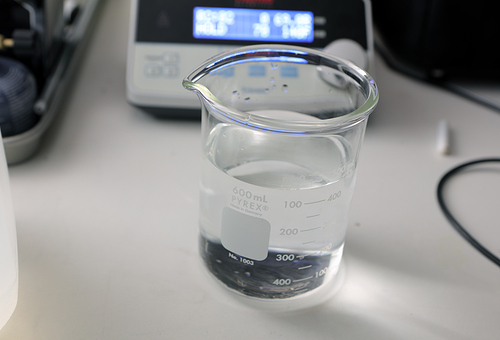 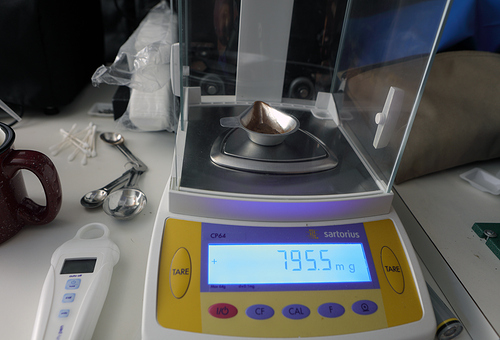 As indicated by the feeding chart, going high on the EC: 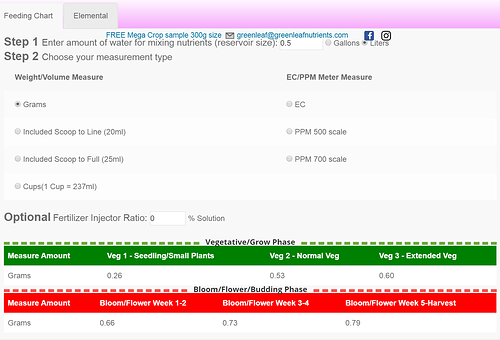 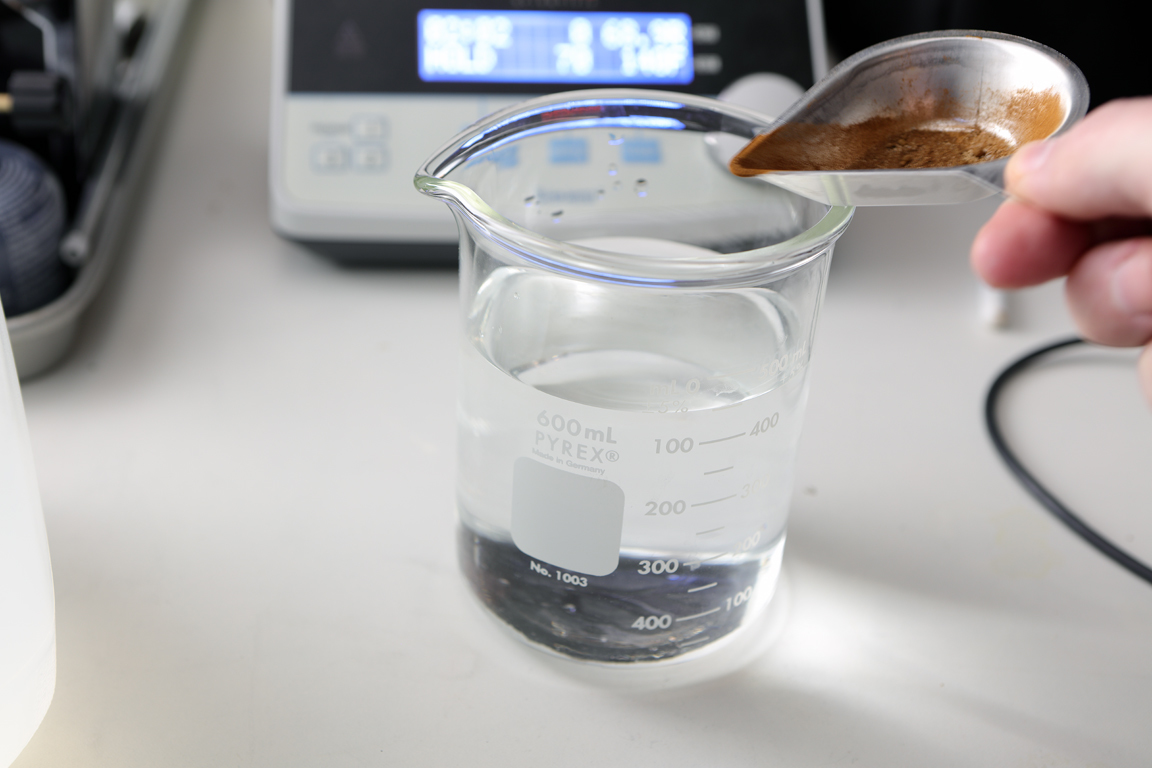 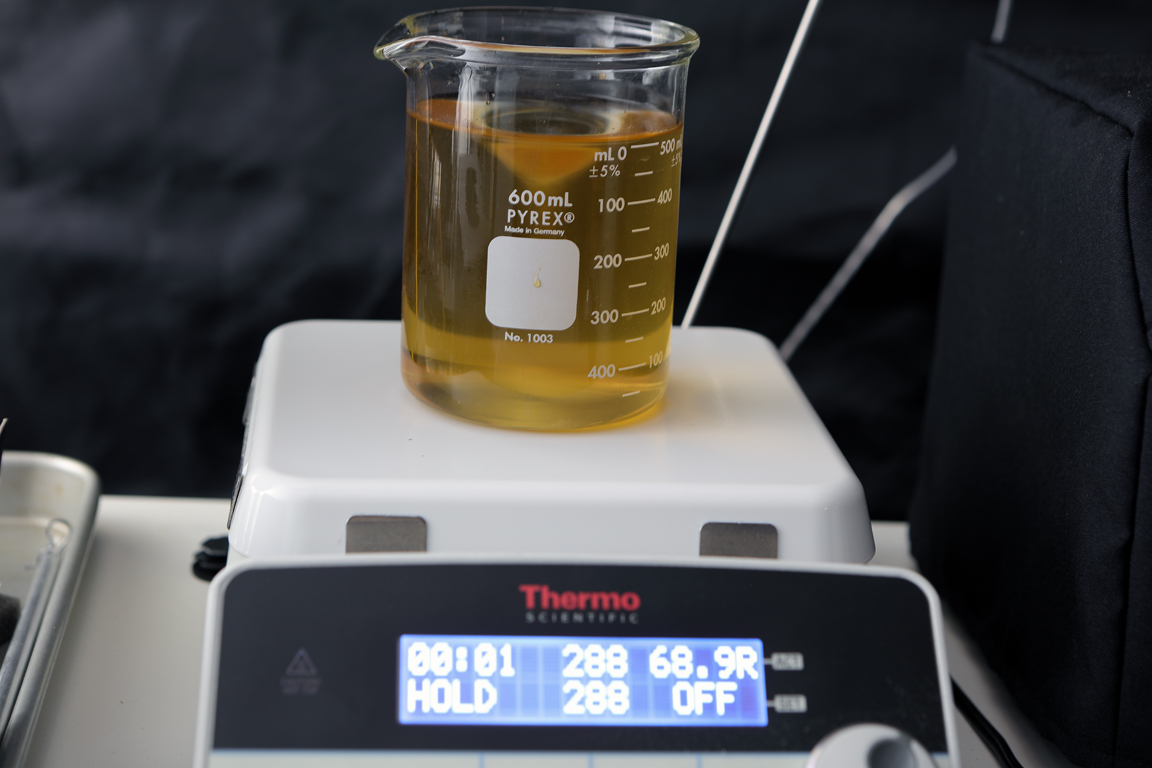 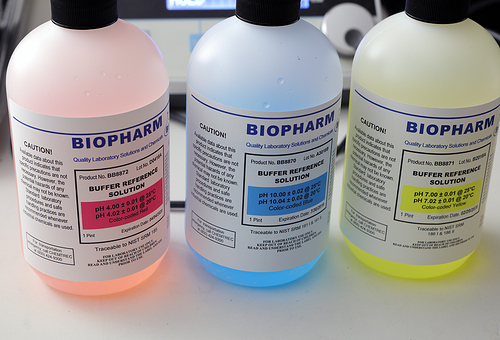 Turn off sitrring. Top off to 500ml. Verify the EC: 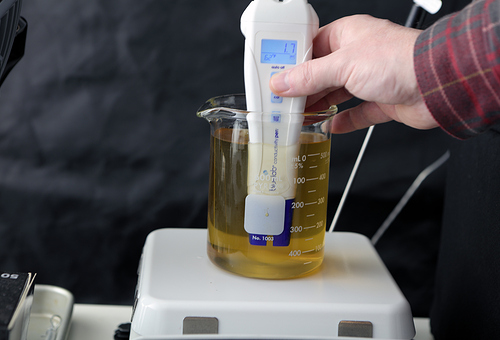 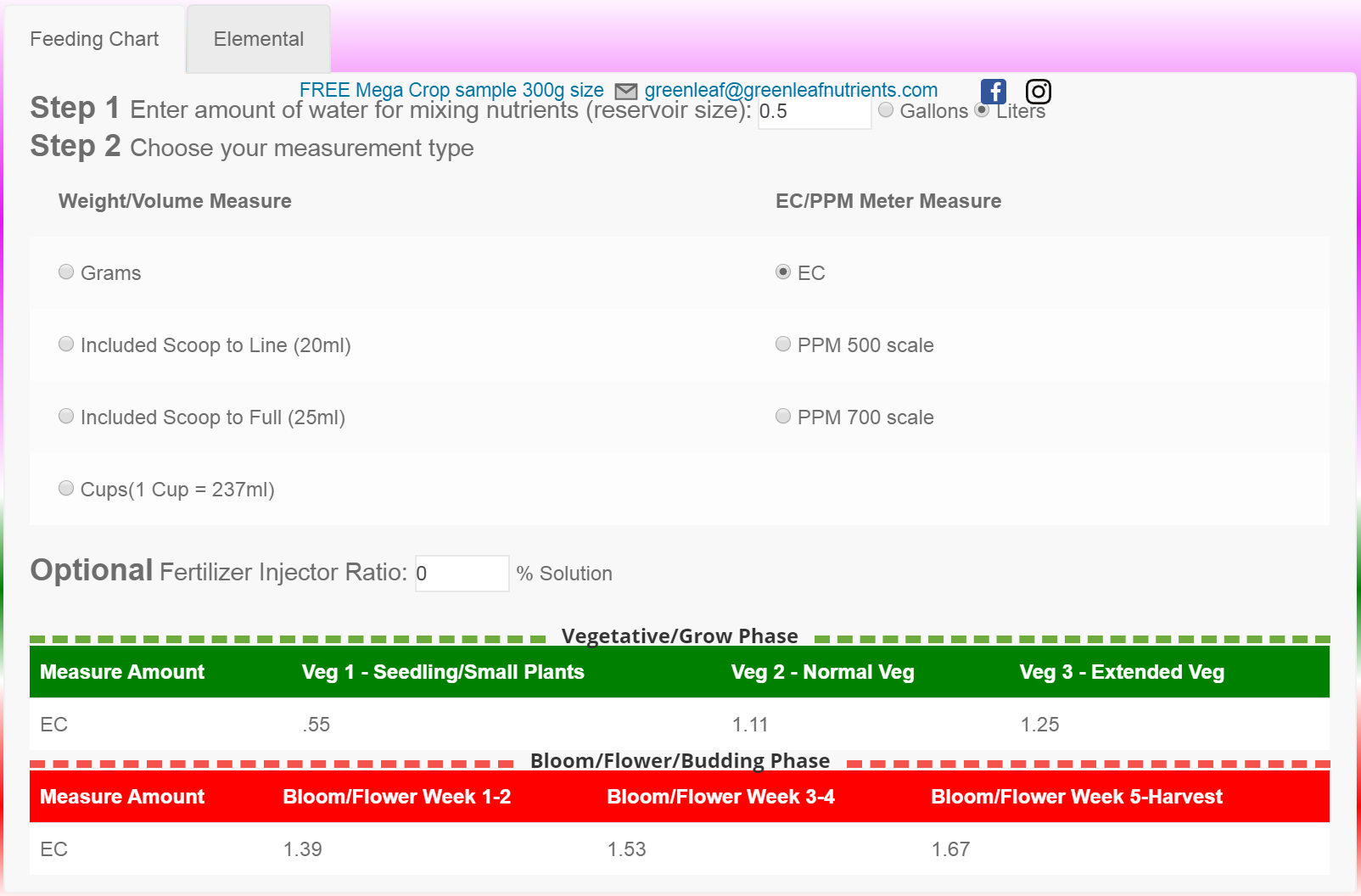 Insert the PH probe and let’s get going: 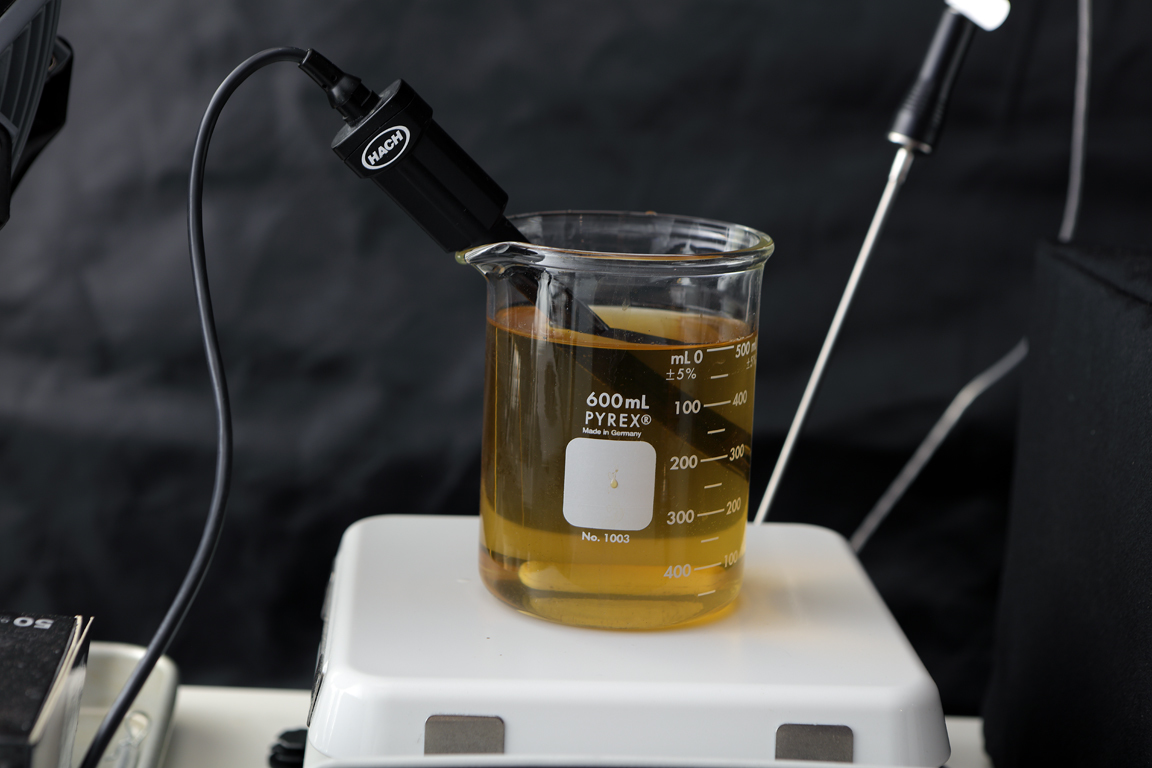 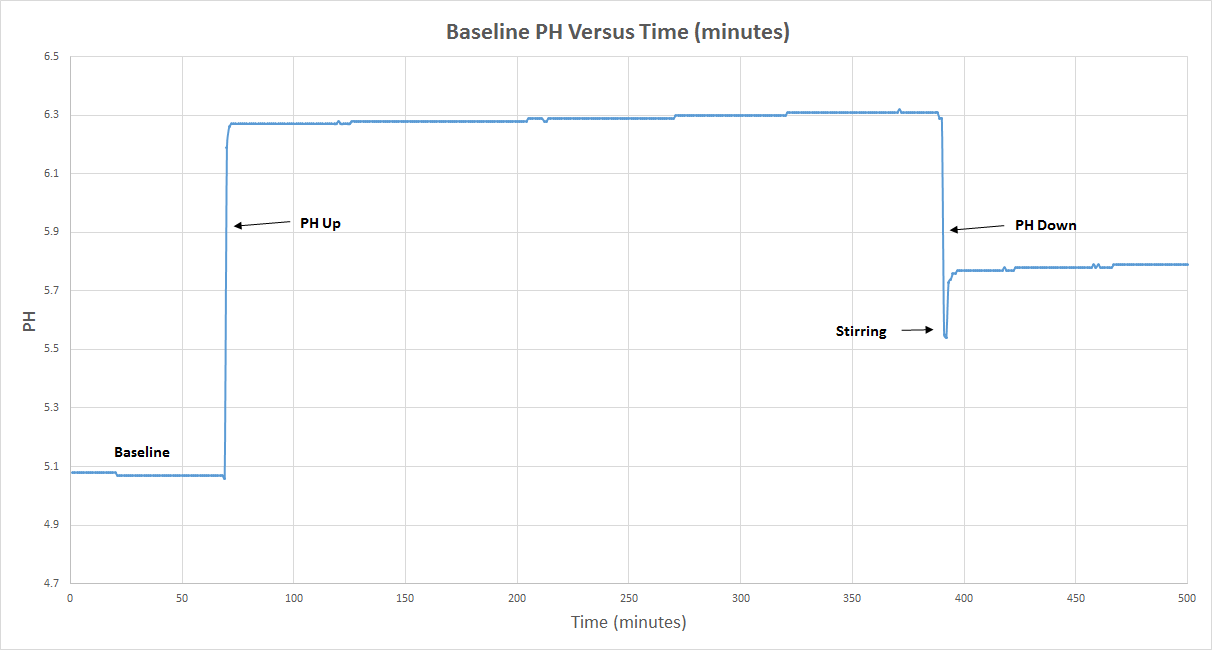 I lost some initial data and would like to run the intervals a little longer, so I’ll probably recollect this data. Minor drift on the order of 0.03PH or so over the measured intervals. This test is simply to evaluate the stability of our nutrient solution prior to running buffer tests. 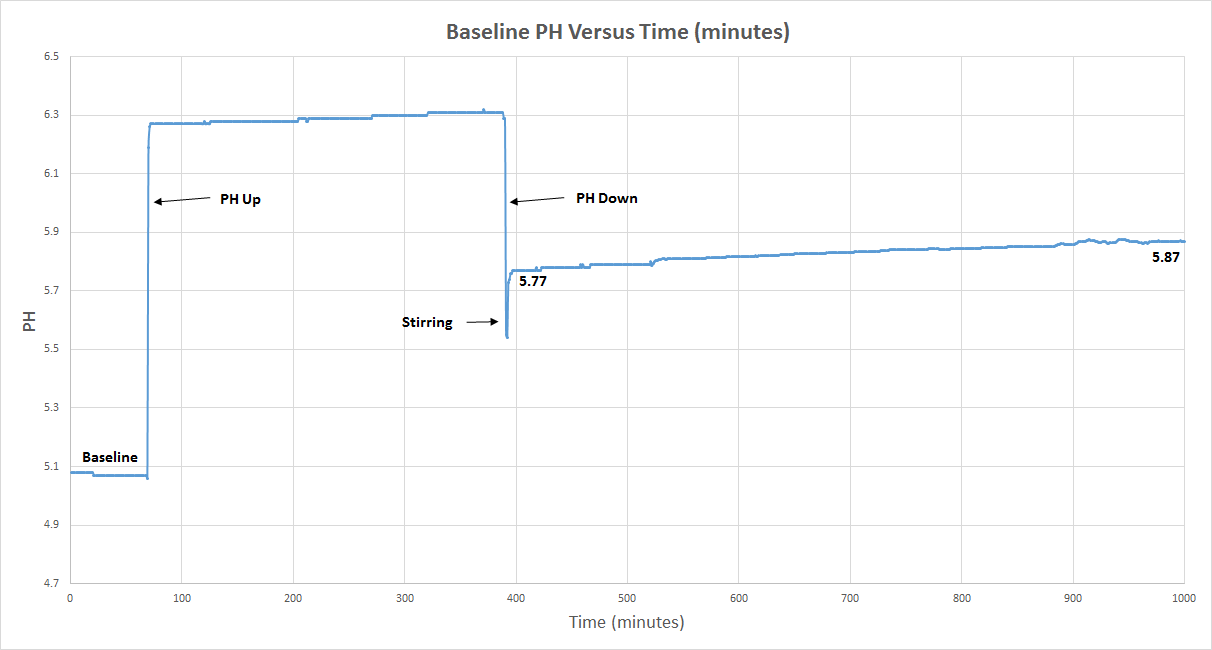 Note: simply used the GH Up/Down for the above while the subsequent titrations utilize 1M KOH.

Let’s start off by looking at some experimentally produced graphs produced by titrating just the nutrient formulation. Then we’ll do the same by combining it with some different buffering reagents.

A short aside. Titration means that we are adding either an acid or a base in small increments in order to “map” the effect on the PH. We are looking for how well we are buffering against the addition of OH- or H+. Recall, the plant (or microbes) as it feeds will be returning H+ or OH- into the solution. We are simulating that effect.

To illustrate how a buffer works, let’s take a moment to look at the following graph of this very slow buffer (using a resin): 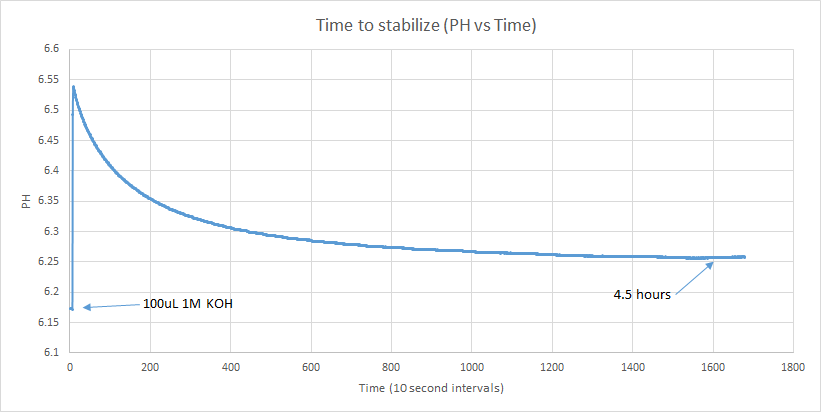 On the Y axis we have PH. On the X axis we have time. What you’ll see in this graph is a small quantity of 1 Molar Potassium Hydroxide (KOH) being added (a titration) to a test solution near time zero. We start with a PH of 6.17 which then shoots up to a PH of 6.54 upon the addition the KOH. It then drift back back towards our starting PH due to the effect of buffering.

We’ve added a bunch of OH- ions into the solution which cause our PH to go more basic. The buffer, in this case a resin, will essentially “absorb” a portion of the excess OH- ions causing the PH to drift back towards a target PH (the pKa).
So, for the example the PH starts at 6.17, we add some OH- ions (plants eating) causing the PH to jump to 6.54, and the buffer pulls the PH back down to 6.25 or so by absorbing some of the OH- ions.

We’ve essentially compressed the action of adding OH- to the solution. We’ve slowed the change in PH. As we add more OH-, the buffer will pull the PH towards the pKa of the buffer.

This process is typically reversible. If we were to instead add an acid at some point (H+), the same effect will occur with the buffer pulling the PH towards the pKa.

It is a bit more complicated than what has been just described since for typical buffering chemistry, what I call “absorb” means the creation of a conjugate base or acid, but let’s not worry too much about that for the moment. Visualizing what a buffer does in use is most important. Also for illustrative purposes in this example, we’ve using a special buffer that is slow. A typical chemical buffer, on the other-hand, will be quite fast.

Different buffer formulations will have distinct pKa values. This is where the buffering effect is the strongest. As our solution PH moves away from the pKa, the buffering effect becomes weaker. We’d want a pKa value that is as close as possible to what we’d consider a good PH value for growing plants. We’ll look at some buffer formulas that have a pKa values near an optimal grow PH.

Zoomed into the region of buffering we’d normally be interested in:

The effect of PH in a hydroponics system can have a particularly pronounced and rapid effect on the health of a plant. Wild swings outside of the safe PH regions can be detrimental by locking out nutrients and changing the osmotic pressure. A buffer acts as a safety to help slow the movement of PH.

There are many reasons the PH in a solution change. Several example reasons include:

Every system and situation differs. A buffer is not meant as the solution for problems that might occur within a hydroponics system but instead it is meant to slow the effect of natural processes and any problems on the PH. This allows for more time to address any issues.

The chemistry in these nutrients solutions are rather complex as there are many salts, potential cross-reactions, and buffering complexes. The easiest way to analyze how a buffer might work within such a solution is to start experimentally.

The above graphs detail the effect of the addition of different potential buffers that have a buffering region within a suitable PH range for hydroponics, are considered relatively safe to plants (I have not fully evaluated the safe concentrations, please review the scientific literature), and are relatively compatible with nutrient formulations.

Reading the graphs, the left scale (Y axis) is the measured PH. The bottom scale is the amount of titrant in milliliters added (X axis). The titrant, in the majority of the tests, is simply one Molarity potassium hydroxide (see discussion later in this thread that explains what Molarity means). Potassium hydroxide is a very strong base and represents the equivalent of a large amount of OH- being added into the solution. It is essentially a PH up.

tells us that the PH will increase by 0.5 for each milliliter of 1M KOH added.

If we were to compare two solutions, we can look at the equations to determine which option has the greater buffering effect. The smaller the slope, the more buffering. For instance,

The following are the current results of the test buffer combinations:

Currently, out of these buffer combinations, the use of MES has the most pronounced buffering result. This is not entirely unexpected as the pKa of MES is quite close to the optimal PH for nutrient solutions.

Cost-wise, MES is fairly expensive as compared to some of the other buffers. At 5 mMols, the cost would be around $20 per 40 gallons of nutrient solution. But, at 5mMol, it simply beats the pants off all the other buffers by a factor of 2 over the buffering strength of all of the other tested buffers.

Very, very cool. Can only like the post once and that’s not enough, really enjoy this sort of investigation. Results already look very good.

Awesome!!! You are the best @Northern_Loki!!

Damn son! Talk about some nice scientific equipment you have there is that your own personal gear or do you have access to something like that at work? Only time I ever had an opportunity to work with stuff like that it was with Tyson!

Thanks folk. Feel free to chime in if you should have thoughts on tests, procedure, or results.

is that your own personal gear

Hmm, there’s something wrong with me (or, so I’ve been told)

Damn son! Talk about some nice scientific equipment you have there is that your own personal gear or do you have access to something like that at work? Only time I ever had an opportunity to work with stuff like that it was with Tyson!

I agree. He has all the coolest toys! I am particularly jealous of the actual graduated beakers! Im still ‘borrowing’ my wife’s measuring cups and using an old Hidden Valley mixing container to measure stuff in Imperial units. I do have one 20cc scoop I salvaged from some fiber health food crap powder stuff though, so I can do this new-fangled metric stuff too

Amazon has some inexpensive beakers, pack of five for 15 bucks.

Hmm, there’s something wrong with me (or, so I’ve been told)

I don’t understand all I know about what you are doing but I’m going to keep following along since I’m using MegaCrop.

At first glance the graph looks like after the first addition of pH adustment the pH already started to buffer?

The markings don’t hold up under strong bases, but for the price I buy two sets and accept there limitations.

At first glance the graph looks like after the first addition of pH adustment the pH already started to buffer?

The drift? Not certain what that is. Pretty slow reaction whatever it is. I’m awaiting a pipette before moving on to the second/titration test. Which hopefully will provide a better view.

p.s. I was playing with some MES and titrating by drops. I am seeing precipitation as the PH increases. But, nothing certain as to where and when as of yet.

Just trying to get a better understanding of the behavior of Megacrop under certain scenarios.

I have no idea what this all means…but yeah! Science!

there’s something wrong with me

If more of us bought, and used, analytical balances and magnetic stir plates, instead of big screen TVs and flashy rims for our cars, humanity would have colonies on Mars by now…

I’m awaiting a pipette before moving on to the second/titration test. Which hopefully will provide a better view.

I think ya better go go with a CLASS A burret! Better control !

colonies on Mars by now

Funny that you should say that, I’m planning on going to Mars in just a couple of moments

better go go with a CLASS A burret

Hmmm, darn it. That would be nice.

Lol don’t stop at Mars, I hear stars are brighter past Oort cloud

I think its cool when people have fun with science

@Northern_Loki - I think I will start a new sample of mega crop with my RO water and see if it behaves the same or similarly to the way yours does.

What is your over all plan for the testing? Im curious why you PH’ed the solution UP, waited, then back down?

MES weakly binds to ca and mg, so my thoughts start there. other possibilies are the ph solutions…

People - like me - who are mostly confused about PH chemistry, would like to know why you say that? What would adding that change and how?