I was looking at the dx
You got Hands on experience do you think it was worth the $
and what did the total cost end up running you for everything needed to test?
Rather hear review from someone like you than google sales ads. There’s no way I’ll get my chit to a lab here in md but id really like to be able to run tests freely as needed

I don’t love it because of the plastic things you need in order to perform the test. If you’re careful you can re use them.

Other than that, it dias what it says it does.

It’s not mine tho.

Thanks for sharing your results.

Need to hear more about the MyDX. Great for situations as @rooted mentioned (which I find to be absurd over-stepping by the state) and those who want to minimize their footprint. Is it a cost effective solution?

FWIW, lab testing in this area is ~$25 per sample for potency and then $50 per sample for terpenes analysis. It might be different for non-flower, idk.

That’s cheap last price I saw in Ontario was $200. MyDX is $699 USD so seems cheap would be great for breeding and selections.

Yes, the pricing here is good. And, this particular lab is very easy to work with, too. Only problem, it’s hand delivery only and it’s a bit of a drive.

Otherwise, I would be more hesitant to utilize them. $200 a sample would be too cost prohibitive for an individual to the point of where it starts to makes sense to set-up your own equipment. Or, not do it at all.

I’ve managed to obtain >3000 flower lab test results from a local laboratory. These are test results from over the last four years or so. Here are a couple of graphs of the potency results across all of the samples (sorted by total cannabinoids): 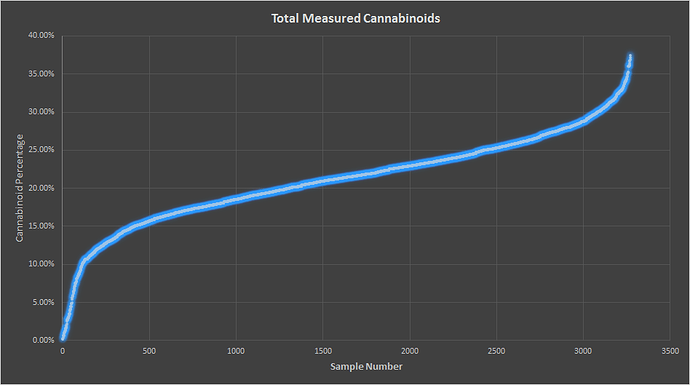 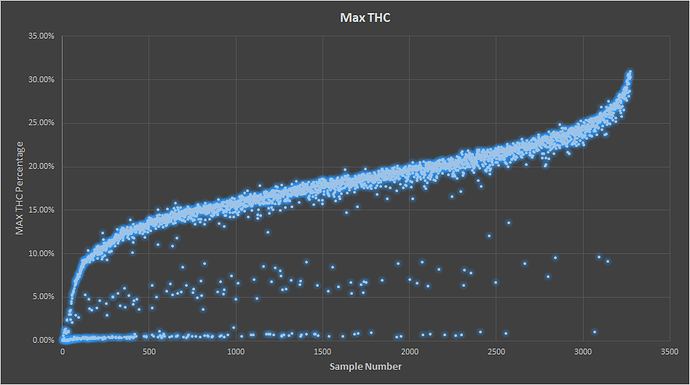 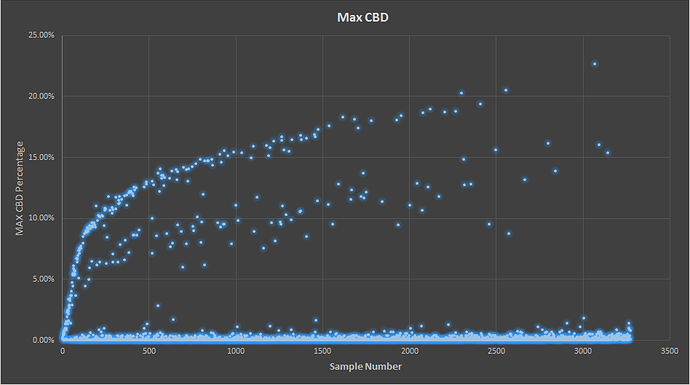 I’ve managed to obtain >3000 flower lab test results from a local laboratory. These are test results from over the last four years or so. Here are a couple of graphs of the potency results across all of the samples (sorted by total cannabinoids):

Interesting graphs - but - I need some help understanding this and interpreting the graph data.

First - did you do 3000+ tests of your home grows, or are these just random samples that the lab has done over some period of time?

What is the time period? (edit - I see now its over 4 years)

Why do all three graphs show an increase over time? Testing procedure changes or? All three show a dramatic climb initially, then a steady climb over most of the graph, followed by another dramatic increase at the end, although Im not at all sure how to interpret that last CBD graph. It seems to taper off at the end?

On the graphs - why are they all different? The first one just seems to be individual plots with only a small spread or range at any given sample point. The pother two are more like bar graphs, but one has bars that congregate at the upper values while the CBD seems to have concentrated plots at lower values?

Then there is that odd discontinuity in the middle THC graph between roughly samples 2000-2600 or so.

But no. This is not my data but instead test results obtained from a local laboratory from hundreds of different growers. Only placed here for whatever analysis and interpretation we can make of it.

Why do all three graphs show an increase over time?

The x axis is not time, it is sample number in order of increasing cannabinoids. We are not looking at time here. I briefly looked at that and didn’t see anything specifically correlated to time just by scrolling through it. Though I may post something like this later on. I didn’t spend a lot of time analyzing this yet, just pop’ed up a couple of plots.

On the graphs - why are they all different?

The first graph is the total cannabinoids. The second and third graph are the “Maximum” THC and CBD where THC is a calculated amount assuming we decarb any THCa into THC. It is calculated as Max THC = THC + (THCa * 0.877). MAX CBD = CBD + (CBDa * 0.877).

So some samples might measure 20% total cannabinoids and have an equal amount of THC (10%) and CBD (10%). While, another sample might have the same 20% cannabinoids but instead have 19% THC and 1% CBD. Again, each graph was sorted by the total cannabinoids (graph one) which is why you see the discontinuities in the second and third graphs (as the ratios can vary greatly).

Not bar graphs, I’ve turned off the lines and re-posted graphs two and three to make the data more clear. We can see the non-CBD type, the evenly mixed types, and the full-on CBD only types.

Then there is that odd discontinuity in the middle THC graph between roughly samples 2000-2600 or so.

You can thank excel for that. I gave it a couple of lashings and it popped back into place.

All three show a dramatic climb initially, then a steady climb over most of the graph, followed by another dramatic increase at the end 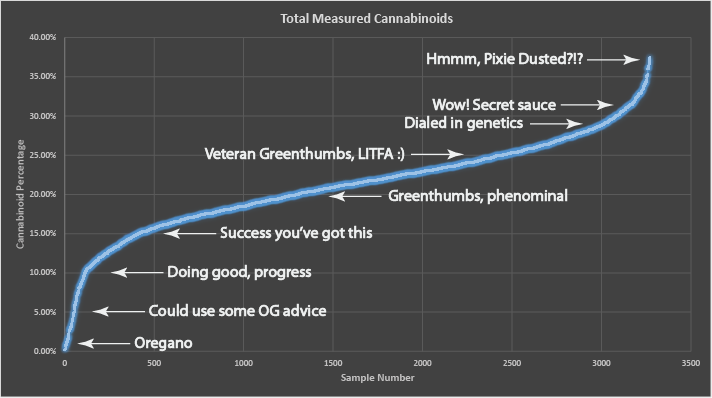 I’d say the number of CBD type plants are rather sparse relative to the THC types such that the data isn’t sufficient to understand the terpenes trend for CBD. The range and average seem similar. Although this could be worth further investigation.

Also interesting is that it does appear that terpenes production is coorelated to the cannabinoid percentages across the sample set. The spread (range at any percentage) is a matter of further interest as well and is probably in some way coorelated to environment/storage + genetics. Unfortunately, we can’t look at genetics specifically since most samples differ. And, we can’t look at environment/storage specifically since that data isn’t included.

I might be able to eek out something useful by looking at the THC vs THCa which might give us a hint if there is some decomposition going on that could also affect terpenes.

Big N like that y not git to regression testin? Plenty of CBD tests to see if yer significant relationship of terps:CBD n the opposite exists.

On a simple single variable basis, linear regressions are in the plot.

Although, the potential number of “actual” variables are fairly large such that a sample set, let’s say, CBD > ~1% consisting of ~60 samples may or may not be sufficient for a use-able regression analysis for the question. Hence, the disclaimer. This’ll take a bit of thinking on whether the data is sufficient. One could dig into the CBD/THC ratios as a metric as well which might increase the use-able sample set. It is one of those things that may be worth looking into, based on the first order analysis though. Is this something that you’d like to analyze under R?

also agree at the 35%+ mark some shit surely had to of gone on like I think highest I’ve heard of is 26%.

This is a new dataset with only a single controlled variable, the lab.

If you’d like to perform an analysis, provide a plan and I’ll provide the data.

That’s total cannabinoids I think you are looking at so THC would be something less. But still, some out of this world numbers on a small subset of the population.

It is a single lab so there could be a general upwards shift for them. They do seem consistent year to year, though. And, the state tightly regulates their lab quality. 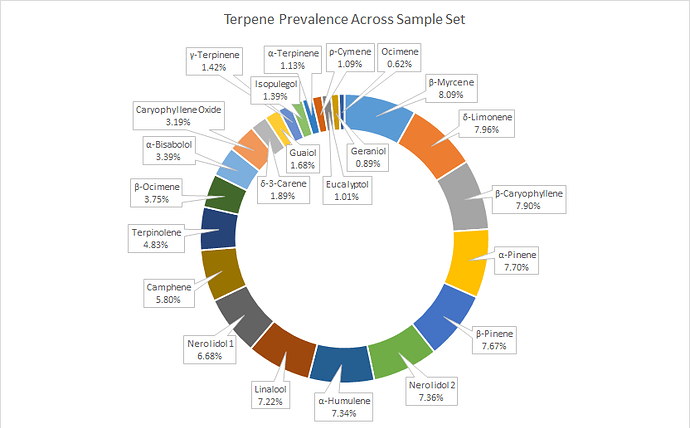 Quantitative Terpenes across sample set (percentage of each specific terpene detected across samples, sample numbers are not correlated): 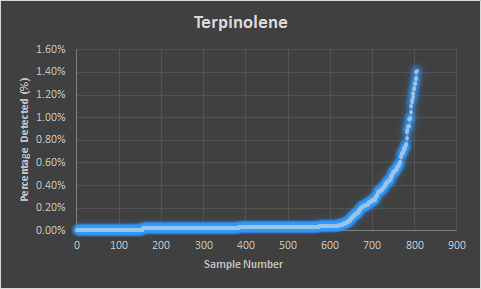 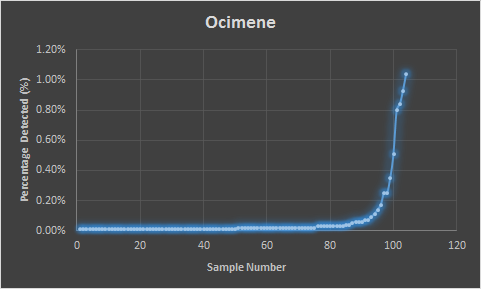 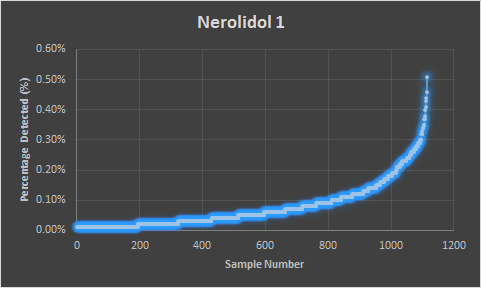 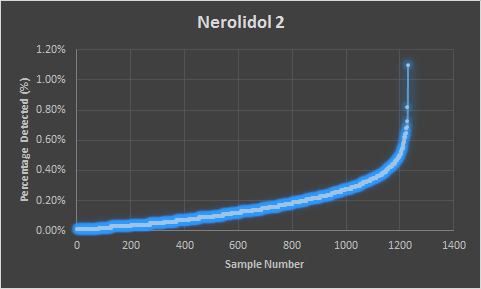 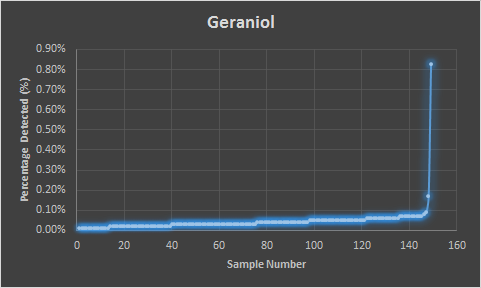 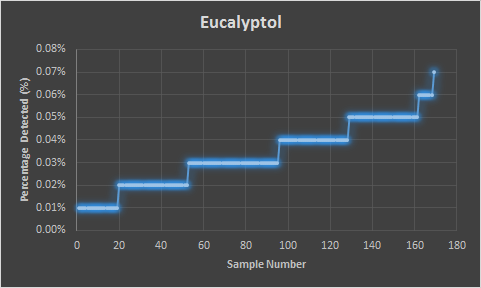 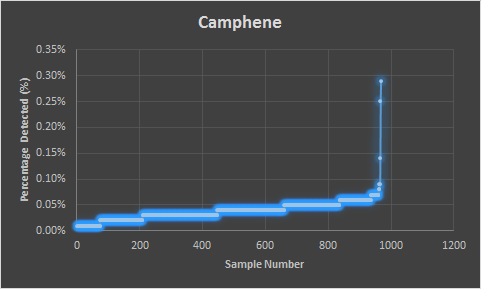 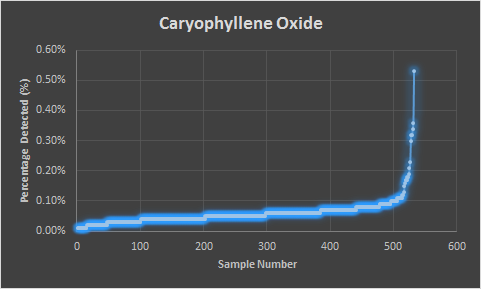 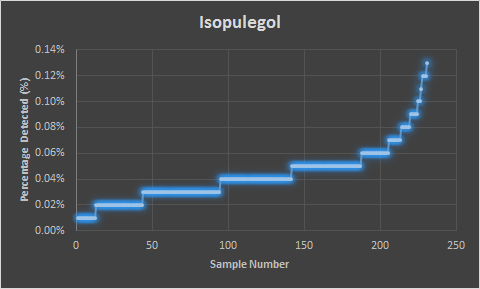 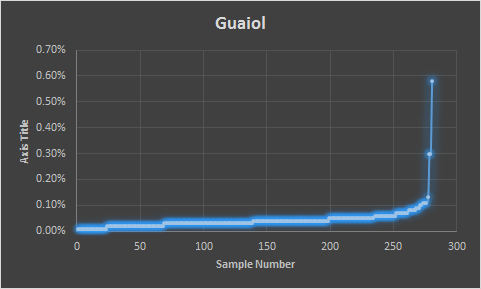 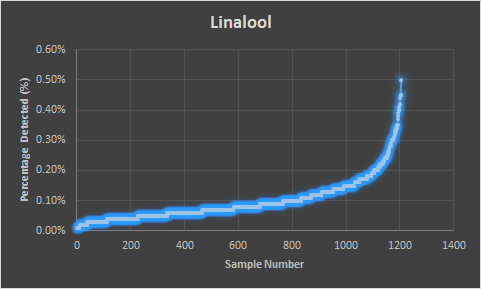 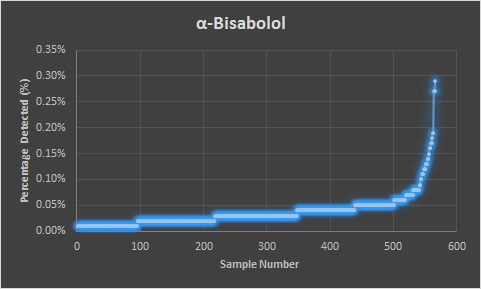 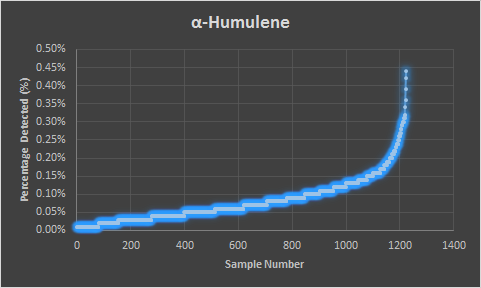 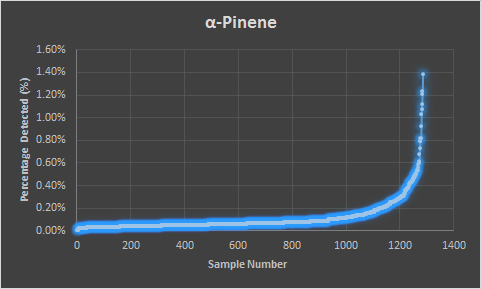 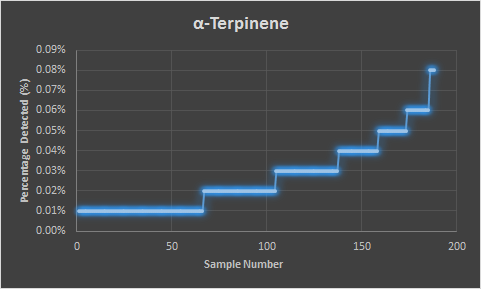 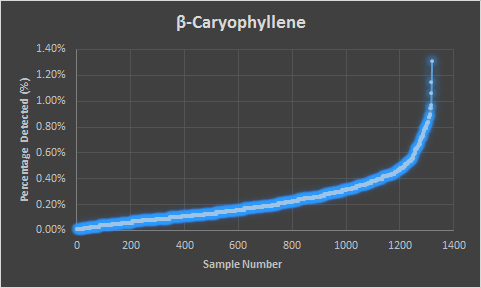 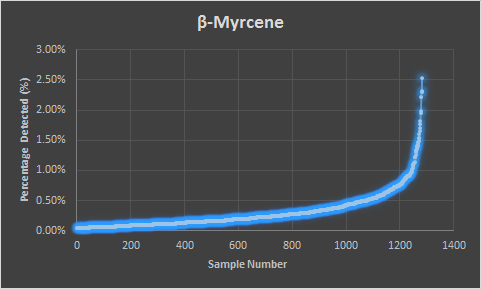 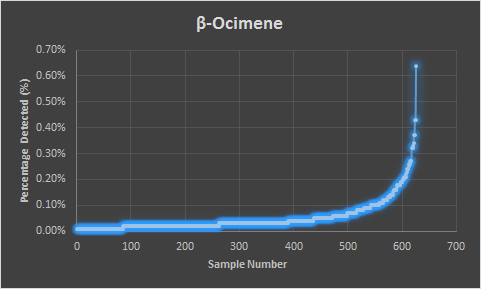 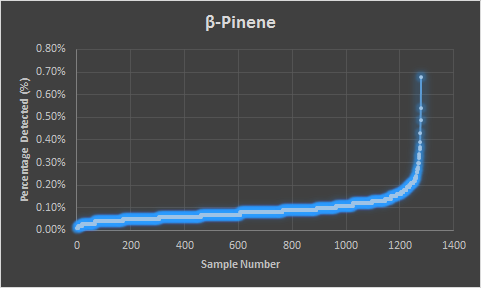 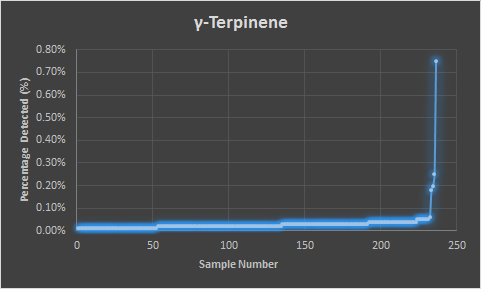 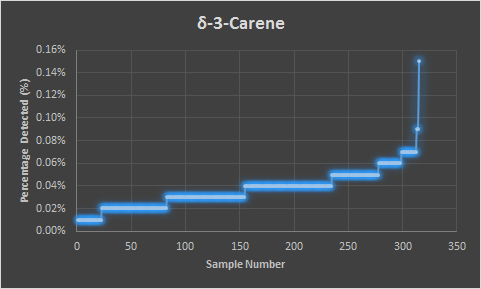 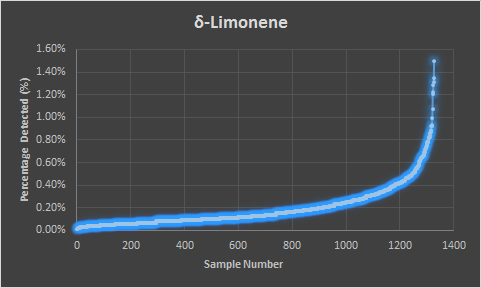 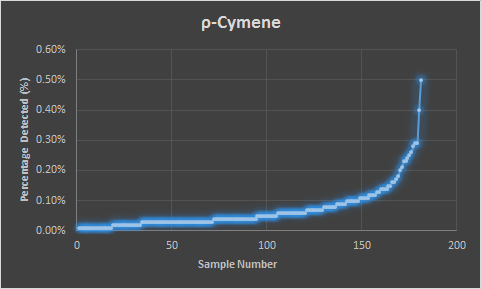 By my reckoning there has to be some plant biology to support all that THC right? Personally I struggle to conceive that ANY plant could be more than a quarter THC.

It’s partially how the sample is presented / handled. They’ll separate the sample into a couple of different lots and analyze whatever it is that they’ve received. I believe flowers (for potency) are first desiccated to some nominal water content prior to weighing. Terpene analysis is likely refrigerated until needed or immediately placed into solvent. I’ve been meaning to have a conversation with the lab director on some of their procedures.

When you look at the photos of the samples as presented to the lab, a good job trimming does appear to make a difference as you’ve removed the mass that doesn’t contribute much to the percentage of cannabinoids (compared to the total mass). So, what you’d probably want to hand them is basically the most tricome laden portions of the flower. You’re trying to not give them seed laden buds or a bunch of stem and certainly not the whole plant.

A good deal of the “error” could occur here as it entirely depends on what you give them lot to lot. Seeds, stems, leaves, etc could have a significant negative effect on the analysis. You could also sprinkle on some kief or add some synthetic terpenoids to “cook” the sample. I don’t know if anyone does this, though.

So when we say 25%, we are talking about the juiciest part of the plant. The well trimmed and handled flowers do show differences but the photos of the low percentage cannabinoid samples illustrate the bulk of the poorly handled/trimmed samples as submitted. 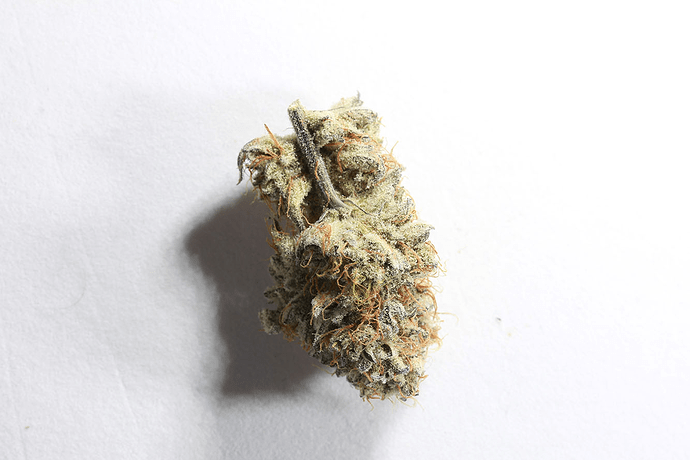 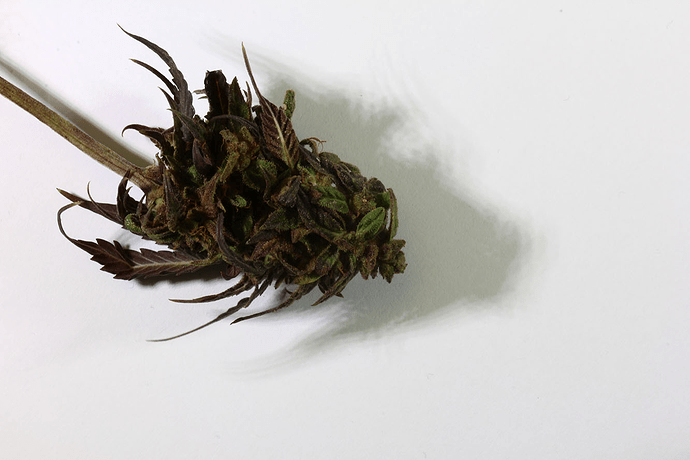