Cannabigerol (CBG) dominant plants are becoming the rage for next season among smokeable/raw hemp flower growers (almost entirely due to the USDA interim rule making most CBD varieties susceptible to testing hot).

So I want to discuss and compile some information about breeding for CBG varieties that will pass for compliance.

The draft genome and transcriptome of Cannabis sativa

Sequence heterogeneity of cannabidiolic- and tetrahydrocannabinolic acid-synthase in Cannabis sativa L. and its relationship with chemical phenotype.
-different synthases have different efficiencies

A physical and genetic map of Cannabis sativa identifies extensive rearrangements at the THC/CBD acid synthase loci.
This paper shows (at least for one variety of fiber hemp (Finola) and one marijauna (Purple Kush)) that the fiber-derived linked cannabinoid synthases (CBDAS, THCAS) are very different in their arrangement. This suggests:

The Inheritance of Chemical Phenotype in Cannabis sativa L
This paper talks about chemotype inheritance and crosses a fiber-dervied CBG variety to a high THC drug variety. in the F2 the CBG segregates, and again produces no detectable THC:

The inheritance of chemical phenotype in Cannabis sativa L. (IV): cannabinoid-free plants.
This 2009 deMiejer Paper talks about the inheritance of cannabinoid free plants and an alternative CBG producing genotype derived from the USO-31 hemp variety. This variety apparently has two gene knockouts; one that prevents cannabinoid production when homozygous and severly suppresses it in heterozygotes, and another that blocks CBD production causing CBG to accumulate. The USO-31 derived region responsible for CBG accumulation produces extremely pure CBG (99.75% of cannabinoids) with residual CBD (0.25%).

DeMiejer also has a 2014 book chapter in the “Handbook of Cannabis” that discusses a similar cross using fiber-derived versus a marijuana-derived (high-THC variety that had a CBG variant) CBG gene region. The fiber-derived linked synthase region produce residual amounts of CBD and almost no THC. Whereas the marijuana derived CBG region variant produces residual THC.

Breeding forward:
Recently Oregon CBD made their CBG variety announcements on instagram. In their post, they explained how they crossed a marijuana derived CBG variety (that produces THC at about 1:27 ratio CBG:THC) with a (probably) hemp derived CBG variety that has a ratio of 1:100-200. (you can see their tests here).

By doing this they have rather cleverly prevented people from producing F2s that will all be compliant (though on a field level the average still would be). Oregon CBD also loves to pretend that you cant use F1 material as breeding material, when in fact F1 material is often the starting point to develop variation in the creation of new lines. I suspect that, because the one of their CBG variants is almost certainly fiber-derived, compliant 1:100-200 ratio plants will emerge easily among the F2 progeny, which would be truebreeding for CBG if these are inbred to F3+. Of course the MTA they have you sign means you aren’t even permitted to save seed for on farm use, let alone breed with any of their germplasm, anyway.

Oregon CBD also made an argument that 8 gene/pseudogene regions may be responsible for residual THC production. Medicinal Genomics also has made this claim (these companies work together, so MG is probably the source of this info).

Ultimately, I suspect for those looking to breed for CBG, if you use a fiber-derived CBG gene region, you will be able to easily produce a true-breeding, CBG-dominant, THC-compliant hemp variety, with crosses mostly behaving as a simply inherited single locus with some residual THC from CBCAS. The negative of this is that you will be starting from a low point for total cannabinoid synthesis. But backcrossing the CBG gene region into high-cannabinoid drug plants or populations should overcome this.

CanapaRoma- 8%CBG under 0.1%THC. No MTA. putatively truebreeding for complaint (at about a 1:65 THC:CBG ratio), fiber derived CBG variant.

European fiber varieties (I am not certain, but these are probably protected by plant variety protection (PVP), meaning you can save seed for on-farm use and breed with them):

Please share any relevant information on CBG breeding and seed sources. Thanks!

Interesting stuff, it looks like CBG will be the new cannabinoid du jour. I don’t really know anything about it or its effects. Does anyone have any experience with it?

I have a CBG/THC variety, Zak Haze, clone tested at 20% THC and 1.2% CBG. Smoking it makes me quite forgetful! 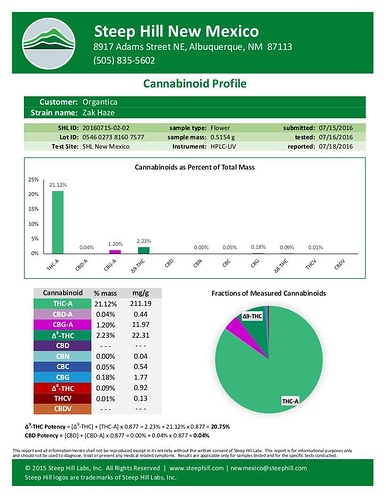 Cool. I am looking for type 4, CBG dominant strains, specifically. Yours is still a type 1 chemotype.

Smoking it makes me quite forgetful!

Interesting… do you have full link to article?

Interesting… do you have full link to article?

I suppose it is

I could definitely use some more brain cells.

I went back and edited in the hyperlinks to the papers that were not working. If any paper is behind a paywall, and you don’t have institutional access, try sci-hub like @allotment suggested. The current working url for me is https://sci-hub.se/. It frequently changes though, as this service is illegally pirating science. Which maybe shouldn’t be something that should need to be pirated?

The inheritance of chemical phenotype in Cannabis sativa L. (IV): cannabinoid-free plants.
This 2009 deMiejer Paper talks about the inheritance of cannabinoid free plants and an alternative CBG producing genotype derived from the USO-31 hemp variety. This variety apparently has two gene knockouts; one that prevents cannabinoid production when homozygous and severly suppresses it in heterozygotes, and another that blocks CBD production causing CBG to accumulate. The USO-31 derived region responsible for CBG accumulation produces extremely pure CBG (99.75% of cannabinoids) with residual CBD (0.25%).

I added the above reference and discussion to the original post. I edit posts obsessively if you haven’t noticed.

This is a great topic I’d love to hear how I can get my hands on some High CBG strains compliance or not.

Cool topic. A lot of Ace’s strains test high in CBG. By “high” I mean higher than average for high THC strains. I think like 2 to 3 percent. 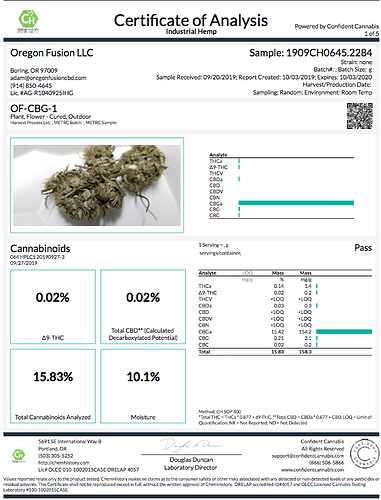 Looking for CBG clones or seeds

Here is a COA for CBG that we have available. We do not sell clones or seeds but have a partner farm co-op program available where we supply plants and farming SOP’s in exchange for a % of the crop.

There’s companies selling seeds, but a lot of em have transfer agreements saying you won’t breed em, and all of them have thousand-plus minimum orders.

I’d gladly take a lawsuit for the seeds, dafuq are they gunna get out of me, ya know?

If you want to try the Zak Haze I posted about earlier, i would be happy to send you some cuttings.

Interesting topic about CBG crossing. What would you recommend for self breeding of stabilized CBG strain?

Lets say you have the bagseeds from some high CBG variant (polinated by some CBG male which appeared in fem seeds). Would you select a mother and then do the S1 feminized seeds?

I mean, the White CBG which came feminized is a selfcross from the same mother S1 I guess. Not an F1 from CBG dominant hemp strain and high THC, that simply wont be stable.

The white CBG from Oregon CBD is supposedly a cross of a photoperiod line and an auto flowering line, where the photoperiod line will drift above 0.3 THC. It isn’t an S1. So if you self it, some will be at risk of testing hot.

This is part of what prompted this thread is that Oregon CBD claims that there are 8 genes that determine THC content. From my reading, I havent found this to be true and if it is true in some cases, many of the genes will be linked (seems to be just 2 groupings identified so far THCAS/CBDAS and CBCAS) so they dont segregate individually.

Residual THC in hemp varieties is probably coming from leaky enzymes for CBDAS or CBCAS. or partially functional THCAS (if present). The CBDAS and THCAS are linked, whereas the CBCAS are not linked to THCAS/CBDAS and may occur in variable numbers depending on the cultivar (but my understanding this far is that when there are multiple copies, the CBCAS are linked to each other). So it seems functionally that there is only one gene region (containing THCAS and CBDAS) to worry about in plants that lack CBCASs, or two regions in plants with CBCAS, (if the CBCAS are in fact all linked to each other). There may be other synthase copy variations beyond this.

Assume there are one or 2 gene regions at play in the white CBG, and you would have to recombine the responsible region(s) from the photoperiod parent line for it to test hot. So 25% (if one gene region) or, (if additive and you need at least 3 copies of either gene region (since the White CBG variety has to have at least 50% of its synthase genes from the hot parent and still be legal itself)) ~30% will test hot (5/16 of a dihybrid cross have at least 3 copies “hot” of THCAS/CBDAS and the CBCAS cassette from the photoperiod parent.)

The specifics depend on how many synthase copy variants exist in the parent lines. Oregon CBD wants you to think it’s a 1/258 chance of getting a firmly legal plant out of the progeny. I am leaning towards it being more like 60-70% chance of getting such a progeny. (Of course since Oregon CBD uses an auto/photo cross for all of their varieties, you also will get 25% autoflowers popping up on top of this).

There is a new paper from McKernan I haven’t fully gone through yet:

Cannabis is a diverse and polymorphic species. To better understand cannabinoid synthesis inheritance and its impact on pathogen resistance, we shotgun sequenced and assembled a Cannabis trio (sibling pair and their offspring) utilizing long read...