What was your first festival/ concert? And why was it memorable?

Cream, November 1968. It was my first time going to the new Madison Square Garden in NYC… it opened in Feb 1968… I thought it was so cool that we got away with smoking doobers.

My mom took my girlfriend, myself and three of my buddies all aged about 12 to see John Cafferty and The Beaver Brown Band open up for the Beach Boys at the local zoo, this would have been about 1982 or so. It was like a scene from That 70’s show, there was Pot and Cocaine and more naked women that I had ever seen in my young life. We were able to buy beer by telling the people in the tent it was for our dads. My mom was oblivious but she had a great time and so did we. Mom was full of fun shit like that when I was a kid. RIP Mom I love you. #fuckalzheimers

Ya’ll be good to one another.

First concert was in a Catholic School auditorium to go see the hair band Winger around 87-88. (don’t laugh.) First festival was Woodstock 94’. Don’t remember much except lot’s of mud, B-Real from Cyprus Hill passing me a joint from the stage during “Hits from the Bong”, and Shannon Hoon from Blind Melon coming out in a dress and pig tails. They were fucking awesome! Glad to have seen them, cause he died a few months later. Oh, and my best friend getting burnt on a whole sheet of Beavis and Butthead acid. Dude gave us a few loose Hits that were awesome, but the whole sheet my boy bought after from the dude was total bunk!

@George1961 the stones, while I saw them as a child, with my parents in 92ish in south florida, I was 12. A metal head, and the only band I was interested in was old school Metallica. I grew up and eventually grew to love them, the stones, but I never seen them again. sadly I dont remember much, except for remembering my parents were so excited to see them.

Man, nothing worse then bunk acid. One year at Panama city spring break we, were at this dive bar, and this man and woman gave me 3 hits, I ate 2 and gave one to a friend. To this day that was by far the best acid I have ever taken, sadly the 2 strips I bought for my friends were bunk as hell. And after me bragging about how good and clean it was, and how strong it was we were all ready for a good time instead we ended up in a cow field picking shrooms and running from the law, and land owners.

at The Felt Forum

I was there! I was recording the show from the Tapers Section next to the soundboard:

My first concert was the band Chicago in early 1987. I was still in high school. Went with a friend. Sat in the nosebleeds and declined a joint that was passed our way. It was not a great show. The opening act was a standup comic who was more entertaining than the music.

I moved to another state for college in late summer '87. I made a bunch of new friends in the dorms and we hit two shows that fall: Husker Du at a club, and David Bowie in an arena. The Bowie show was the Glass Spider tour with Peter Frampton on guitar. That was a kick ass performance!

My first music festival was Summer Camp, near Peoria, IL, in 2004. That got me hooked on festivals. I attended Summer Camp again, Wakarusa many times in both Kansas and Arkansas, 10,000 Lakes in Minnesota, Bear Creek in Florida, and many smaller regional fests over the years. One of my hobbies is making audio recordings of live music and a festival is a great chance to capture a bunch of bands in a short amount of time. After going home and basking in the post-fest glow, I would have hours and hours of audio files to listen to as I tracked out the songs and got to re-live the moments again.

Festivals can be memorable for many reasons. The music, being with friends, a “nearly consequence free environment” in which to indulge, and the weather. I rode out the remnants of Hurricane Ike in a tent with sustained 70mph winds after watching the Black Crowes and Umphrey’s McGee. I’ve attended festivals with mud so deep it sucks the shoes off your feet. Gotta put in a plug for Muck brand chore boots. I had a pair for working on the farm and am so glad I packed them for the festival. My toes stayed dry the entire weekend while the grounds looked like this: 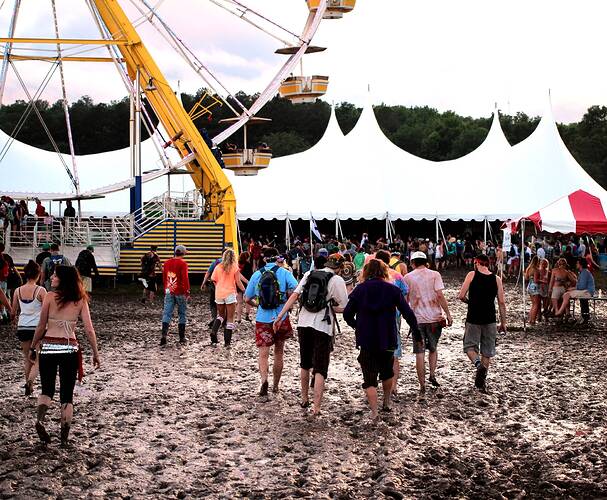 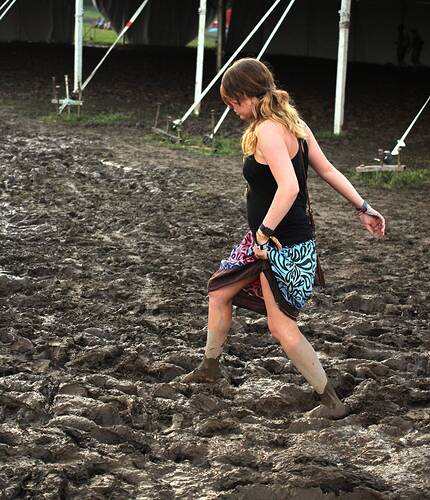 Another fun thing that happened was when I was at hemp fest,. I think it was sublime im pretty sure… They saw us lighting a bong with a magnifying glass and pulled me on stage proceeded to have me light the bong in the same fashion and then they threw joints out to the crowd… That was fun as hell. Big crowd but I was just coughing my nuts off in front of them, whats the bfd. Ha good times.

My first music festival was Summer Camp, near Peoria, IL, in 2004. That got me hooked on festivals. I attended Summer Camp again, Wakarusa many times in both Kansas and Arkansas, 10,000 Lakes in Minnesota, Bear Creek in Florida, and many smaller regional fests over the years. One of my hobbies is making audio recordings of live music and a festival is a great chance to capture a bunch of bands in a short amount of time. After going home and basking in the post-fest glow, I would have hours and hours of audio files to listen to as I tracked out the songs and got to re-live the moments again.

Was that the one where they sent everyone home bc of really bad tornadoes, then picked up the fest again the next day? I had the forethought to grab a hotel so we could get out of the storms, before it was cancelled. Took a shower, heard from our friends it was cancelled and watched all the heads file in and turn our hotel into an extension of the fest. Good times!

My first fest was bonnaroo '02, was insane. Didnt do another bonaroo after that.

Were they Bush X back then? That would have been an awesome show!!

Off track from the original q, but one of my most memorable was this tiny bluegrass fest (not a huge bluegrass fan either) at the saltpetre cave in murphysboro, IL.

Amazing setting with the performers playing in the natural amphiteater. All day of music culminated with a massive thunderstorm at about midnight during the last band. The remaining crowd took shelter in the cave, acoustic jamming ensued in the cave/amphitheater til our cooler full of beer ran out and the sun came up. Was such a bad ass night!

I can’t remember my first show, but the most recent one I WAS going to go to was the Sinners and Saints tour…line up is/was:
Big Wreck, The Headstones, Moist and The Tea Party
Would have been awesome. Postponed till 2021.

The Headstones, Moist and The Tea Party

My first concerts were at a place called Mel lastman square where they did free concerts every Friday night. I saw our lady peace, I Mother Earth, headstones, moist, and some others.

The first concert I paid for was NIN and david Bowie at skydome. Then tool at the warehouse.

They were only Bush x in Canada because I believe there was already another band called bush here. And ya it was a good show, they had some good songs but they sure disappeared quickly.

our lady peace, I Mother Earth, headstones, moist, and some others.

Ugh…would have been serious to see those bands before they hit the bigtime. Can’t remember the drummers name from OLP, but I met him at the airport once when I was 11…I was just getting into drumming and Superman’s Dead was fresh on the charts. Was a great moment as a pre-teen.

they had some good songs but they sure disappeared quickly.

Well, gavin got gwen stephani…so I’d be like, “sorry band…got some baby making to do and gwen gave me her no-limit cc…so…yeah…bye”…lol

Nice and I was just thinking about seeing Alice Cooper

Been to tons of shows in Toronto - never went to the Mel Lasan free ones though.