LOL, not me my friend. The computer algorithms are becoming angry for some reason. Please forgive us, computer.

Hi @Enstromentals. Yes, I have seen those. They are pretty cool looking and worthy of a discussion on the pro/cons.

My initial rundown on questions.

It would be easier to compare them if the GIF’s were side by side, but the bubble size looks to be much smaller in the new GIF. That could just be the surficants/cleaning agents though.

You are right, I didn’t capture the straight water results on video for the new set-up. Will do this on the next pass. Changing what was in solution made a rather large difference in the bubble size which got me thinking about the addition of a surfactant to a nutrient formulation. The bubbles breaking at the surface look like the fizz after pouring a glass of soda water.

Thanks. I’ll try to gin up an experiment with a simple tee.

Not that it’s a significant issue, but I also see that it doesn’t create enough turbulence to disturb surface tension and it wouldn’t really stir or keep elements in suspension like waterfall or traditional air stones might

Perhaps in combination with another mechanism, idk. Like placing one in the reservoir only and pumping to the buckets. Various techniques are always worthy of consideration since there are benefits / trade-offs with everything.

Here is a plot of oxygen concentration in solution with aeration intermittently turned-on/off for an experiment on waste sludge digestion: 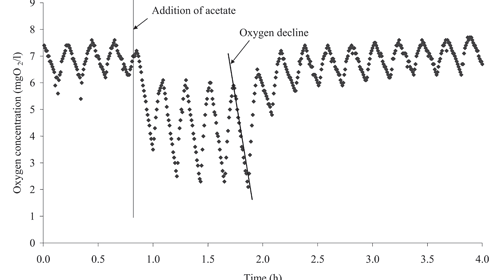 image.png1180×731 48.1 KB
The rate of decline is what’s interesting and you’d see something similar with plants. So, if we have a mechanism that can keep the amount of oxygen in solution in balance in relation to the root uptake (and/or, consumed by beneficials) we could have an optimal situation. Most tests of DO in solution seem to resolve around single data points, may not have plants in the system during the test, or do not track oxygen consumption/balance over the plant lifecycle.
We know of some of the most efficient techniques, as you’ve noted, but I’m not certain this tells us if we get into deficient situations at some point. This would be the question. In this way, some of these alternative mechanism including electrolysis could very well have merit.
2 Likes
Northern_Loki June 19, 2018, 1:48am #66

Not easy to see the bubble size but here are the differences between plain h20, surfactant, and surfactant+nutes (sorry 'bout the color correction).

Haha, thanks! Trying things and experiments are half the fun! 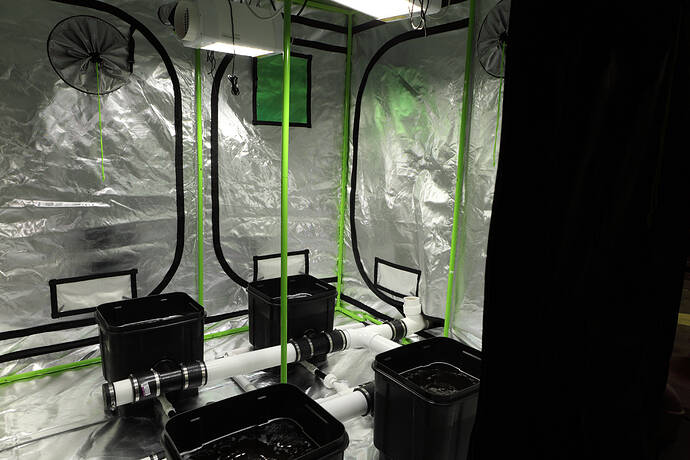 Is that a green Qube tent?

This is located in a basement, so height is limited. The height of the Green Qube ends up being perfect for my situation (bump my noggin on the lights regularly, too).

I also have a green Qube. They’re awesome quality at a good price

I would agree. Word is that they are working on distribution in the US, as well.

I talked to her about being a rep here in the Midwest, but nothing ever came of it. I would love to sell the product. It’s a top of the line quality with some better features than even gorilla, but a the price of the cheaper tents

Might want to ping her again. She did say US based distribution is something they are actively looking into (within the last month).

I wrote emails to be written in board meetings etc.

Perhaps slightly off topic, but relative to the discussion of micro bubbles and gadgets. What do you thinking of these things? https://youtu.be/kjPcrCwgGIo

My initial rundown on questions.

I was looking at those a while back as well and I have some reservations.

They say the hydrogen given off is negligible and that is 100% BS or they have no clue how their gizmo works. When you run a current through water it breaks the water down in to oxygen and hydrogen. The amount of each is always the same. For every water molecule you get 2 H’s and one O.

It just so happens that that is the exact ratio you need to have a very very explosive reaction that will form water again.

They say its nothing to worry about, but that is BS as well. In my teen years I made lots of bombs by placing a baggie over the opening on a motorcycle battery and collecting the gas while charging it. When you attach a fuse to the baggie and light it, you get one heck of a bang out of a sandwich sized baggie. Ive put them inside a 2’x3’ cardboard box and ended up with confetti all over the back yard. Lots of fun, but really dangerous.

In an enclosed rez, you would get a highly explosive mixture in short order and it would be at the perfect ratio for an explosion every time.

I have also read the the emitters dont last as long as claimed and are almost impossible to clean.

More importantly to me - its easy to get 100% DO without having to run those risks or spend that kind of money. They were comparing the emitters to air stones in the video and its well known that air stones are one of the worst ways to increase DO.

I dont know about the O2 in solution and how it would react with the nutes, but I would worry about excess un-disolved O2 as it is highly reactive. I think a lot more testing needs to be done with this tech, but the hydrogen bomb aspect is enough to turn me off

the hydrogen bomb aspect is enough to turn me off

LOL, but it’s a win/win if your hobbies are both horticulture and explosives!

Back on topic a bit - have you done an metering of DO yet during your trial runs? Thats one of the things Im most interested in seeing. Do the micro bubbles really work better or make any change at all, and if so, how much? How does the fluming by itself compare, etc. Looking forward to your continued experiments

I haven’t run any controlled experiments as of yet since I’m really still obtaining parts and piecing the system together. But it’s coming along nicely and have the major pieces in place. Albeit slowly. Next task on my agenda is to pipe in the chiller.

Thanks for the reminder and feedback on the DO experiment. I would like to run some extended experiments but in the interim I think I’m nearly far enough along to get some trial results (for fluming with/without bubbler) without plants in the system. Though, I’m thinking I’d like to have the chiller in place to avoid complications with factoring out temperature swings. I do not currently have a mechanism to measure volumetric flow for either the solution or the air, as you’d pointed out earlier, so I’ll have to punt on that for now. I should be able to get to this shortly. Thanks for the kick in the butt!