How to clean your grow room after harvesting?

>In-between grows, and after the room is 100% cleaned, unplug all electrical equipment and unleash a roach bomb. Flea bombs are ok too.

Evacuate the room for at least 2hrs and then put on the intakes and exhausts at full throttle for several hours. Then put in your fresh new clones and start the run again. Make 100% that any mother grow is sealed off from the bomb or you’ll have them suffer, the bombs are phytotoxic.

As for the insect spray leaving a film - it’s safe. I only remove the hoods and lamps as mist directed upwards would coat them. Anyway, I do it in-between crops every time – even if no mites are seen. It’s a preventative measure. The trick is to remove or cover up any plants. Not a drama when it’s done inter-crop.

>Best way to deal with organic waste is to compost it, even if that means bury it in fertile active worm populated soil. It is the 100% stealth method. No one will ever know and it will improve your soil.

Never throw MJ roots in the bin because that’s a danger to LEO.

>Rely on quarantine. Never go into a grow after having been outside pulling the weeds. Shower and put on some fresh clothes. Prevention is better than cure.

If you have to introduce new clone plants that are suspect, then cut a plastic milk bottle in half and sheep dip them upside down in a solution of AVID with an approved hort wetting agent, such as Agri-Soak 2, or WetterWater. Then mother-plant them to provide clean stock to run grow after grow.

Bleach btw best works to reduce the spore expression load from outbreaks of botrytis (bud rot) and pythium (root rot). If you’ve had a bad outbreak of that or a reoccurring problem, then swab down the walls and floors and wipe down the system, as well as run a rez with bleach. Dump, rinse and then set up the new run. Bleach is no use for mite prevention, other than for cleaning items bought in from outside.

Remember, mites will over winter (go dormant) in the cold months, so bringing in anything from the outdoors to the inside grow without a thorough clean could potentially unleash a fury of mites. I’m talking common outdoor items like a watering can, old pots, pieces of timber, bricks ect. Clean 'em before you bring indoors.

What do OGers recommend to clean mildew from a painted wall surface(old, flat paint)?

I was not overly surprised to discover it, just the amount.

About 3 sq. yds. It appears I may have to remove the baseboard/trim or inject a treatment behind it too.

I found this online…implies I need to use a TSP concoction and then repaint with Kilz.

I was going to suggest Kilz

@ThaWeedguy you remember the name of that mold spray you were telling me about a couple weeks back?

This is what I would use… 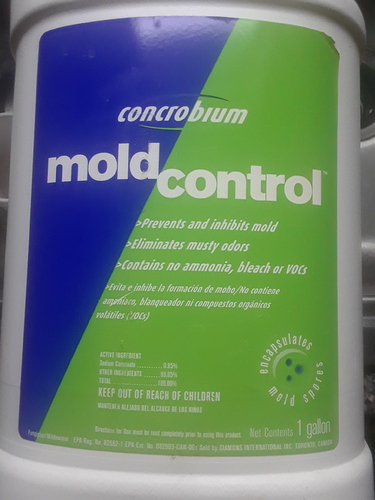 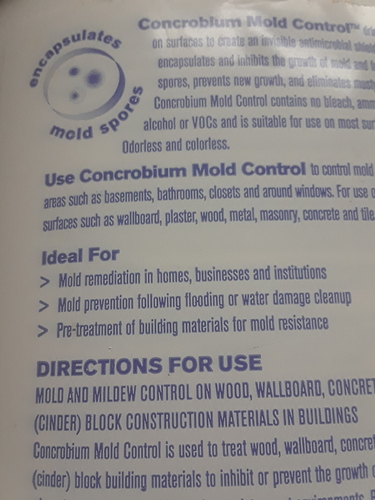 And sodium hydroxide is Lye.

Bleach:
Bleach also kills mold if it comes into contact with it. The spores and allergens from mold are neutralized as well. Bleach will kill mold growing on non-porous surfaces like glass, tiles, bathtubs and counter tops. However bleach cannot completely kill mold growing in non-porous materials like drywall and wood.

Is bleach or vinegar better to kill mold?
Bleach and vinegar can both kill mold, but vinegar is much more effective for removing mold from porous materials. This is because bleach only kills mold spores on the surface of affected materials. Vinegar will penetrate porous materials and kill the mold at the roots.

The active ingredient in “Mold Control” is Sodium Carbonate.

Thanks, I remembered that right after you typed that.

Dear Did you use Sodium Carbonate in the cake again?

always wanted to try this method myself

that works well for mites

I like to use Star San to sanitize between harvests. I also use it on clone trays before putting cuts I them and cleaning my hash washing machine.
Star San- 16oz https://www.amazon.com/dp/B0064O7Y64/ref=cm_sw_r_cp_apa_i_j8HYDbQ22Q5PJ

@reikox i second you on star san i believe it will do a great job on cleaning grow rooms. right now i have used it to clean beer making equipment does a great job.

I had a severe spider mites infestation, cleaned my tent with a vapour cleaning machine and that worked like a charm, just some boiled eggs left …

every time. I can’t imagine they are that lucky avoiding pest and other problems