Just got my hands on some NL#5 seeds from a old friend. I was wondering if anyone had some good insight on how best to grow, and or what is the best phenotype to look for? Any info would be greatly appreciated. Thank you in advance.

Welcome to OG Ozone98, I’m new here but I think its easiest to grow in soil first, but someone experienced will be along soon for sure.

Is this your first grow? Or just first time with NL#5?
Can’t go wrong with soil it’s very forgiving, how much space you got to work with?

Could grow them just normal no training, or tie them down and top them to get wider bushes.
Space could be a factor

soil hands down. dry amendments, larger pot size so you can top dress as the plants progress and earthworm, compost and other teas for feeding. keep it organic and you cant go wrong.
i used to grow nl as a 9 clone in a 1m x 1m x 2m grow space under a 400w, 600w and 1000w grow light. resul, 9 perfect plants every time.
nl is a great choice as there very simple to grow and as forgiving as soil is for growing in.

Thank you for your response, and help. This is my first time growing NL#5. It seems that there isn’t much on the internet in regards to NL#5. I found some great and helpful diaries here (OG) in the past. Just wasn’t sure what phenotype to look for that would be the best expression of the stain.

Don’t worry about what it’s supposed to be. Just pick the one you like the best. Unless you are breeding, that’s all that matters

There’s a real good pheno of that that has the most awesome piney earth funk the smoke as it burns smells like a civet cat pissed in the Fire.

I understand what you’re saying about the NL5. It’s not like there isn’t info on the strain in general, but what are the specific traits of the original that you could look out for?
I do agree with @VAkish though, in that you should pick the plant you want. I have been going through some Nirvana NL from 2007 that has produced one keeper so far. I have no idea if it’s a real NL#5 pheno, but the calyx to leaf ratio is good, it’s frosty, and “relatively” low odour, not scentless *edit - just brought the 4 little colas in from the garden shed, put them in the garage and in about 1 minute the wife said, “it smells like weed!” ha ha! A couple I grew in 2008 from this pack had really nice mango smells when the buds were brushed, but I think this one beats them in the complexity, adding fruity licorice with hashy undertones. I could just rub it on my hands and smell it all day. I’m re-vegging it right now and it has been crossed with a really resilient (C99xHerijuana) male. After week 5 it stunk up the garage too much, so it was put in the greenhouse to finish. It only ever lived in a 4 inch pot and produced well considering. Although I stuck it in a larger pot with some basil, the roots never ventured out - too far into flowering I guess. Not a lot of love as you can tell, but still produced relatively well. 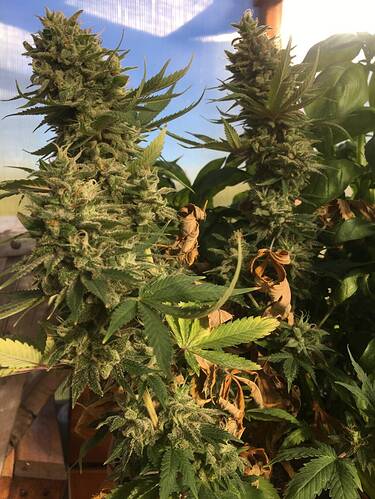 Man what a tree.

Dr Atomic had a awesome NL cross that was supposed to be as close to the original as possible.Anybody know if he’s still around?

I see NL but it doesn’t look like the original. Idk I’m just here for the topic.