Sending cash through the mail with no tracking

I am an old school grower, and first ordered seeds from the Seed Bank of Holland decades ago. I still recall the courage I had to muster to drop hard earned cash in to an envelope, and the faith I had to put in to the fact that I would eventually get my seeds. Lo and behold, a month or so later (it felt like years) some seeds did actually show up at my house, courtesy of the United States Post Office and I grew them much to my satisfaction. It was at that point that I realized that if you trust people, that they will come through, and they have a lot more to gain in the long run by actually sending me the seeds rather than just taking my money and not sending anything, because I placed several more orders over the years with Nevil, all without a hitch. I have since sent a lot of cash through the mail, as presents for people’s birthdays, payment for concert tickets, and many other transactions (both illicit and otherwise), and never once had an issue with the person on the other end not receiving the money, or me receiving the goods I paid for in return. I stopped paying for tracking, etc. for that reason whenever sending cash, and also felt that it shows a certain amount of trust to send someone cash with no tracking, and if you are expecting the trust to be returned, then you get what you give. Also, the money spent on tracking always seemed like a waste of money, better spent on other things, since I trusted the system.

However, recently I made several purchases through a well-known and highly regarded seed bank in the USA, having done business with them before, and having heard nothing but good things about them from friends and the community. I placed a few orders within a few weeks, and some of the packages crossed in the mail (sending out payment for a 2nd order without receiving my first order) and I didn’t even think twice about doing that, having had several positive transactions with them before. One of the orders I placed quite awhile ago supposedly still hasn’t been received by the seed bank, however payments I have made since then have arrived safely. I have never had an issue receiving the seeds from them, and up until now I never had an issue with them receiving the money. This leads me to believe one of two things, either the letter containing the blank money order was lost or stolen in the mail system (which is highly unlikely, I have never had any mail actually lost anywhere, it always eventually shows up), or the seed bank received the money and for whatever reason they didn’t record my payment (perhaps an error in their system, or a human mistake of some sort). At this point I am assuming the issue was with the seed bank and not the postal system, and am very disappointed in the seed bank and don’t plan on doing any more business with them, even though it was my fault that I didn’t have the payment tracked, and that’s why I am not calling them out in this thread. Perhaps times have changed in ways that I am unaware, but lesson learned by this old hippie and now whenever I send a blank money order or cash through the mail I will be tracking it. I don’t like the implication of having to track money I am sending to someone, since I would prefer a relationship with a certain level of trust built in, but as I said, perhaps things have changed in ways I am unaware of.

Monkeyman, unfortunately they have changed. I have always felt like you have, being old too, that you trust people to do the right thing when you treat them right. In this community it seems to work.

However,if this happened sometime after March, I would say there are a few ways for the system to fail. Postal Service is far from perfect, they have lost stuff I had tracked.

The seed bank could have been overwhelmed and lost the envelope. With all the shut downs and business closures that happened less people in offices or businesses working. Shit happens.

The current situation we are in is nothing like none of us has seen. Times are tough and people steal stuff now unfortunately too.

I have stopped sending anything important without tracking now. Times always change, but not always for the best

I’ve shipped stuff with tracking and it get lost for weeks since the Covid thing. Many ways this could have failed. At least with tracking you know who dropped the ball.

I’ve had several packages lost (with tracking) in the last few months. The shipping carriers and USPS are having a hard time right now. They all showed up eventually, but some were missing, stuck in the system, for a month.

Wanted to buy an accessory for my vaper and this is what they replied, hope they exagerate … 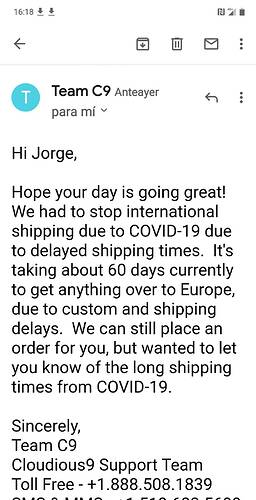 I had the same issue with a certain well known Dutch seed bank.
I had used greeting cards to send cash
They were very hateful about it. This made me much more suspicious. I stopped using greeting cards. Next I went with a money order system and tracking and found that another certain dutch seedbank insisted I contact them about payment but did not reciprocate when I called them. I went to the post office and spent 14 dollars to retrieve the money order and cashed it.
The big Dutch seed banks are just middle😐
There’s no reason to buy from any of those fuckers any more.
There are plenty of places in the USA or Canada or Spain to get decent seeds without the hassle. Fuck the Dutch.
Now I use pay pal, credit card or secure trading platforms to get my seeds. It’s seems the hardest was ACE. I spoke directly to a human who consented to use PayPal for my one purchase from them last year. It now looks like they are taking credit cards.
I’m sure a person could get a prepaid card and use it one time and pitch it. Although my state is ‘legal’ we are supposed to buy seeds in state! Ha! Where do you think we get them?
Several of my favorite vendors will call me and take my order😂
There is lots of places to get seeds. Theres no need to fuck with those aholes. Pm me for more info

I have bought to a well known dutch seed company three times and never had a problem. In fact, I ordered to another dutch co, the package didn’t arrive, they sent me another with extra goodies with no charge and shame on me the first package finally arrived.

I owe them at least some good reviews: there were Frisian Ducks from Royal Queen Seeds, good people on my case …

@LemonadeJoe want to shift this to private lounge area?

maybe i just worry too much

@monkeyman with some luck maybe your payment will still arrive.

Some of the replies give me hope. I have one going on 12 weeks at the moment.

Personally the 2 times I’ve ordered seeds online from seedbanks overseas (msnl and just recently choice seedbank as they had a strain ive bben looking for for a friend) but both times I’ve paid with bitcoin and no issues yet(knock on wood) the msnl order dropped off tracking for about a month after it made it to the US and then one day I randomly got a card from the uk with my seeds. I do agree with OP though that there should be that level of trust for sure, but if I were to send $ or a money order etc I ALWAYS get tracking and even insurance (if its enough like house payment or something like that . But im paranoid as a cat on crack.

It’s not funny but comical the same big name dutch outfit call them ‘a’ began the second outlet later named ‘b’, got my name from there and proceeded to tell me I won freebies! I wrote back and instructed them to please send to a certain stealth address with stealth package since I am a high school teacher in a bible belt town.
They agreed.
A month later I get a package requiring a signature at the post office. It is clearly marked with the name of a well-known marijuana seed bank. It includes not only seeds, but snapback caps, grinders, t-shirts, bumper stickers, and rolling papers with their logo!
I have never ordered from them and obviously never will
I use the papers though

I didn’t mean to imply that the seeds I ordered recently were from a Dutch seed bank ,I was just referring to my earliest interactions with them. The seeds I recently ordered were from a well-known seed bank in the United States, and as I stated they also received two orders SINCE the missing order, and shipped those successfully. Yes, I realize that things are much different now since March of 2020, but I hadn’t really realized exactly how much things had changed with the postal service. I find it strange that the only piece of “missing” mail that I have sent in the last few months contained a blank money order, but I will keep myself open to the possibility that I will eventually get those seeds that I ordered.

Seems to be a couple month delay on the European service

yeah my mail has taken some crazy routes that I have seen lately, I understand that the mail is in a uniquely slow situation, so I will just be patient, I have no other choice, other than to re-send a money order with tracking (which I am not ready to do). I hate things like this, because it can make me distrust people or situations unjustly, so I do appreciate the perspective here. Again, lesson learned - my mistake.

Are you in the usa?
It’s taking about 6 weeks for me to get orders from Italy to my door . Week and a half in the USA and the same from the UK to north east usa.
Trust pilot is a good place to look at a companies reputation.
I always add tracking.

That’s the power of the dollar. If it weren’t for Amazon the USPS would be bankrupt. We already bail them out with billions in tax dollars every year