I’ve seen this done with decent results mainly for Sativa doms and I’m just wondering if anyone is doing it currently or has done it?

I’ve also seen it done with indicas, but they produce like less than a half ounce sometimes and you really gotta pack them together to make it worthwhile.

Here is one example of a Sativa dom that works great in restrictive potting and 12/12 from seed: 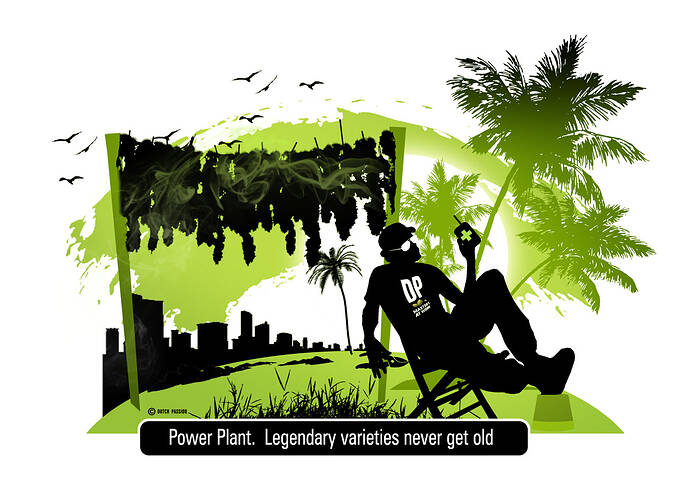 Power Plant grow review, from seed to harvest under a 12/12 light system. Power Plant remains one of Dutch Passions most appreciated varieties.

Anyone doing this somewhat unorthodox way of growing?

Sannie and Speescees both suggest 12/12 more or less from seed, depending on the genetics. Goes well with SoG and unlimited plant numbers.

I’ve seen this done with smaller containers for breeding purposes. Specifically to quickly evaluate and select certain traits and move into F2, F3, F4, etc much faster. I might try 12/12 from start for my next run.

Talk with @comacus on here about 12/12 from seed he runs his sattys that way, where height is a concern

I do it sometimes. Not quite from seed, but sometimes starting about when there’s a 2nd set. I’m never a very long vegger though, especially with sativas.

I’m in a similar situation.

The thing I’ve heard is that you can’t flower a plant before 3 weeks veg anyways.

However, the plants I’ve seen 12/12 from seed do seem to be even smaller and finish even faster than a plant under 18/6 the first 3 weeks from sprout

@MumenRyder I’ve observed much the same as others have noted too. If a strain has too much indica genes one can end up with a 6" bud. I have that currently with a Big Bud plant that I started on 12/12.

If you find the right mix of Sativa/Indica, or a relatively quick Sativa the method can work well like in the article you posted. I ran some Goji OG, and it did really well on 12/12.

If you have a pure equatorial sativa, that lives in 12/12 normally, the reduced light cycle will not do much to slow them down. Although, I do think they will stay a little smaller than if you veg them for 6 weeks. I had a Snowhigh Panama Black I ran on 12/12 from seed that went 26 weeks!

Right now I am actually doing a 12/12 run. I selected a couple haze crosses, a few from Snowhigh, and a few more early flowering Africans. I’m hoping they turn out more like the ones in the posted article, and I have high hopes for the selected seeds!

Here are a few examples of plants that were run on 12/12 from seed. 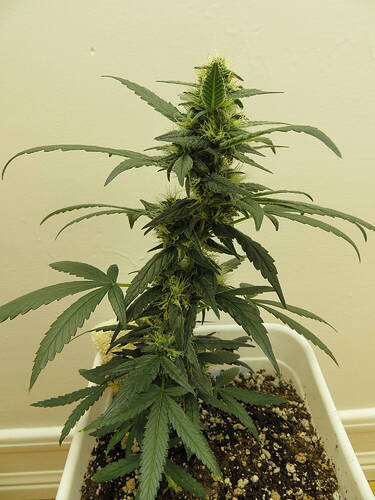 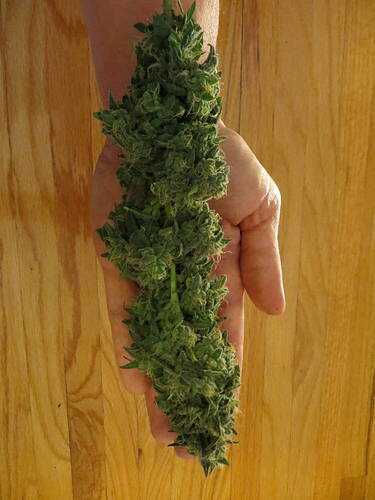 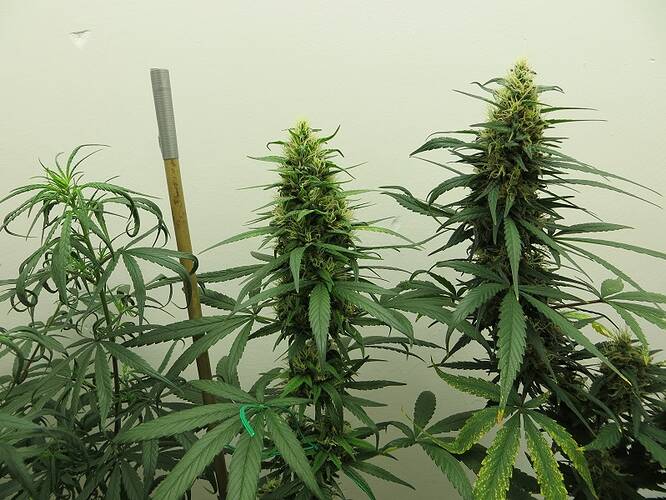 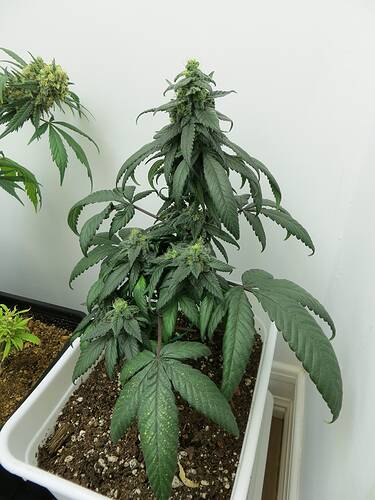 NL x BB. This is what you hope you don’t find! 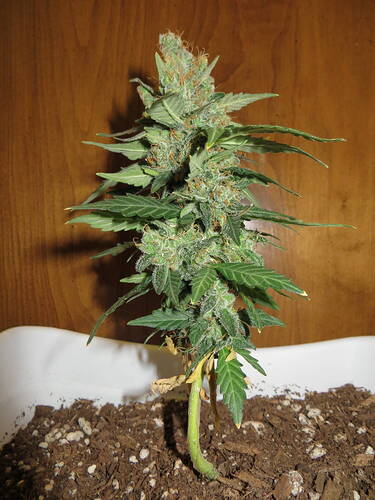 Panama Black. This is the other end of the spectrum. This plant went 26 weeks on 12/12! 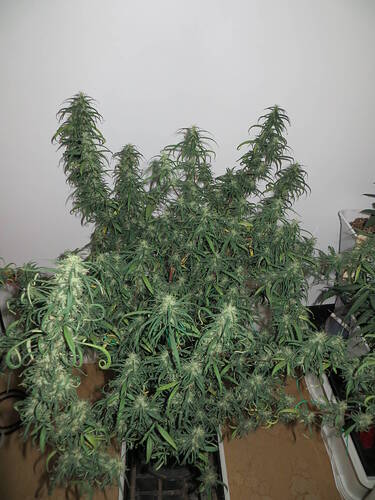 I always thought you get more stretch with the longer dark cycle so 12/12 from seed wouldn’t actually give you shorter plants than if you vegged for a few weeks under a normal veg cycle first?

My thought for short sativa’s is blast them with some 4k QB’s or strong Metal Halide or similar, something high blue spectrum, max wattage the plants can take under a 24/0 or 20/4 light cycle, and that should keep them short. Least that seems to be whats happening in my tent, I have like 15-20 nodes on 11" tall plants and that’s with red spec leds. The struggle is real to get to two feet

But I haven’t been able to verify myself yet. I tend to prefer indica’s in general so haven’t really grown any sativa leaners that I’d need to try it on. Just a thought I’ve always had on the process. 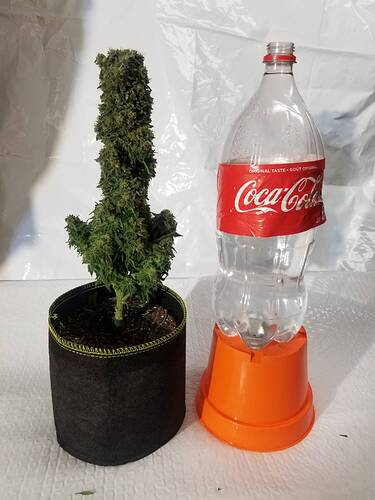 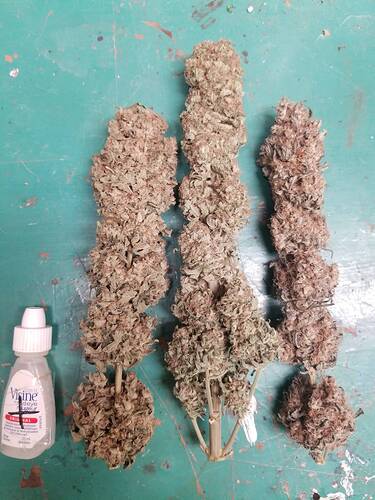 I’m in the midst of running a test on this myself.

I’m super happy how it worked for this plant - I had to bend it over because of height restrictions, but basically gave me a perfect 18” plant with no larf… maybe the bottom 2 branches, but those got pollinated.

So I’m my opinion it’s pretty cool - can be a great tool to run through seeds and not have them get too tall.

I haven’t had a 6” plant yet thought - so that wouldn’t be ideal.

Thanks for all the examples!

Which is interesting because the idea is out there that you can’t force a plant to flower before it’s 3-4 weeks old. However, if that were true I think plants grown 12/12 from seed would be a bit larger. Definitely larger than the NL/Big Bud

Those pure Sativas are pretty intense to grow indoors… 26 weeks is pretty rough, but that plant looks great

Seems like the method is definitely experimental, but can turn around smaller plants faster in some scenarios. Like you mentioned, it seems dependant on strain.

I’ll check it out

but basically gave me a perfect 18” plant with no larf…

That sounds about perfect! Would be cool to see a picture

I used to run 12/12 from seed in a PC case. If I found something I liked, I would reveg it. Then I found autos and left all that silliness behind me.

I keep trying autos every now and then, but it seems like if they aren’t grown in soil they get enormous. Even in small pots of hydroton, or small amounts of rockwool/coco they try to grow like they have tons of root space. I’m impressed with people who keep them small. @Mr.Sparkle comes to mind here, but I think he uses 1 liter of coco per plant and maybe less. He proves you can make them work in soilless in small spaces. However it’s not easy and only certain autos can be grown that way, unlike 12/12 from seed photos where even Sativa doms can be kept small.

I got pretty annoyed with autos in 1 gal pots of hydroton. They take as long as photos and you have less control over size. My 3BOG was almost 40 inches tall and filled a 2x2 tent in a 3.5 liter pot. Took more than 90 days to finish.

On another forum a friend grew an auto in a solo cup of rockwool and it was pretty much full size.

Not knocking autos though, the 2 I grew recently were great. Probably 2 of the best plants I grew in the last year as far as terps and potency AND the yield was on point. Just difficult to grow them the way I like, which is in hydro/soiless SoGs.

That’s actually part of the reason I’m investigating 12/12 from seed.

Far less than a liter. I believe that he uses closer to 400ml containers. To each their own, I wasnt impressed with 12/12 from seed.

I agree for sure, it’s very setup dependant what method to use. I keep trying autos because the Mephisto plants I ran really were nice… They have great selection and it’s easy to order from them. But I would rather grow a plant per sq foot for the variety rather than 1 plant per 4 sq feet.

No wrong method here for sure though. It’s interesting to see what everyone comes up with.

yeah im around 400ml with my square pots, and every plant and grow is different whether auto/photo soiless or soil, or whatever.

As for 12/12 even in a small environment, i always found that regardless photo plants always took 2.5-3 weeks of veg time even in 12/12 before they thought about flowering, so i typically always gave them that 2ish first weeks under a veg scheduled anyways as total flowering times didn’t differ. Also that seem to fall pretty true in that say a photo strain says it an 8-9 week strain, under 12/12 from start its gonna be 10-11+ weeks.

Sounds about right I think.

The guy in the power plant article said his plants could be done at 70 days (10 weeks) for an 8 week strain.

I wonder if part of the reason the 12/12 from seed plants come out smaller is not just because of early flowering, but being deprived of light the first 2-3 weeks. Which isn’t necessarily a bad thing if you wanna keep them small, just something I’m thinking about.