…but I haven’t come across another strain like this…this pic is from 2015 of 4 bag seed bud, 3 smelled like Wrigley’s Juicy Fruit chewing gum, except for the 1 that smelled like kerosene. Now that I have more experience I would love to bump into this strain again…the juicy fruit strain that is. 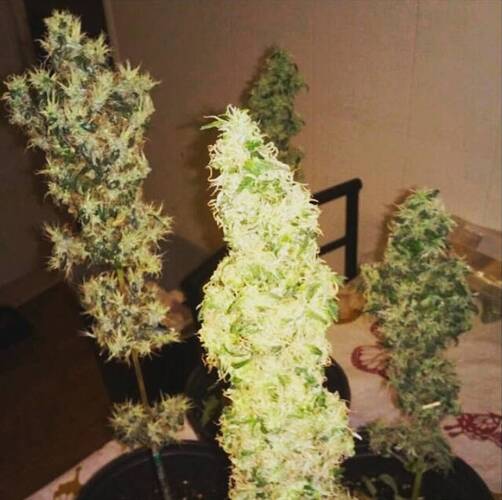 This link is broken.

I had some forbidden fruit that smelled and tasted like 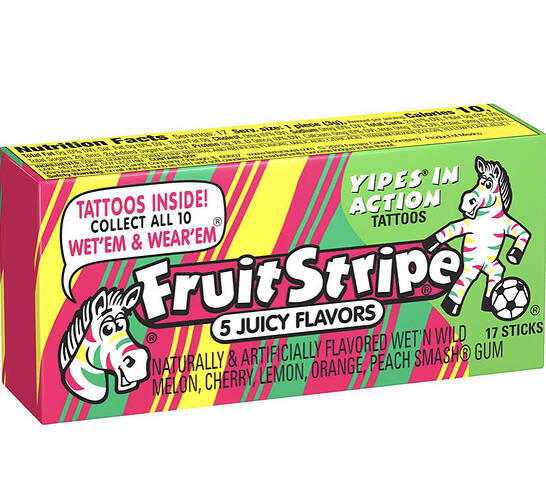 @GrowingInThePines maybe it’s because my IG is private i think?..I’ll fix that.

Forbidden fruit or forbidden fruit crosses have that smell in them. Sweet pink bubblegum with a hint of berries depending on the pheno. The buzz isn’t super strong and they don’t yield all that well, but the flavor is outstanding

Which bud is the fruity smelling one? Right, center or left?

I have a plant growing from the Juicy Fruit strain. Also one called Fruity Pebbles. Tell me what to watch for, if either matches what you grew, I will let you know.

I have a few fems of Fruity Pebbles, Tropical Punch and Pink Lemonade are on a short list of good and fruity seeds I acquired through trades. I’m chomping at the bit to grow the Fruity Pebbles and Tropical Punch, but I grew one Pink Lemonade in the corner and was surprised. The smell was Pink Lemonade totally and the chemotype was a nice 21-22% 70/30 Indica Dominant pleasant buzz. I’m cherishing those few fems and when I run it I’m cloning a couple just so I can rock my mini greenhouse with the sweet smell.

I love strain braggin! Top 5 and I’ve never had a bong hit! Wake me up for breakfast.

The strain Juicy Fruit aka Juicy Fruit OG aka Fruity Juice is from Sensi Seeds. It is an exceptionally fruity strain.

When Fruity Pebbles was made back in 2012, it was a very limited one time seed run and seeds were going for up to $1500 per pack of seeds.

Good luck with your search.

It looks similar doesn’t it? To juicy fruit i mean @DesertGrown

Which bud is the fruity smelling one? Right, center or lef

…but since this was over 5yrs ago the only things that were distinct was the the crazy amount of pistils and the juicy fruit aroma…if I knew what I know now I could’ve possibly kept that strain alive.

Thanks…I’m going to check out Sensei and see what’s good.

Heavy duty fruity is one from back in the day i always thought of trying , th seeds ( maybe )

Brother @ifish , you are reading my mind again… I was going to mention Heavy Duty Fruity to @leetdood. It’s the nose-stinging, pheromone rich big brother of Juicy Fruit.

Maybe 12/13 years ago, I grew Heavy Duty Fruity, from T.H.Seeds, in the ground, in my backyard.

It got to be about 5’/5.5’ tall by the time it started its flower cycle and the foliage was showing a lot of purple, due to the nights becoming cooler, but the flowers remained green. It smelled very fruity indeed, strong, but not too strong.

At probably week three of flower, there was suddenly an incredibly strong and fruity fragrance being emitted by the flowers of the plant, especially at night.

I lived on the corner of a very busy street and a very chill neighborhood street. My neighbors never knew I was growing cannabis, even the ones I was friendly with. There was someone growing close by, maybe a street or two away… you could smell their flowering cannabis on the breeze and my neighbors thought that was where the overwhelming fruity smell was coming from too. I let them think that.

About a month later, I was at a convenience store with a friend of mine that was about 4 blocks downwind from my house and as soon as my friend and I got out of his car we both could smell that plant on the wind right away. It was unmistakable to us what that smell was. The people hanging out front of that store could smell it too… I think I harvested it a week, or so, later.

If you grow outdoors and have sketchy neighbors or grow indoors, but don’t use a scrubber, it could be too much for your surrounding area.

I let the plant go an extra 10 days after it was totally ripe and the fruity part turned into an overwhelming smell of sweet syrupy dank fruit and soured rotting fruit and earthy/moss/gassy smells. The kind of smell that gets stuck in the back of your throat and deep, up in your nose… almost as bad as gear oil. The smell and flavor lasts for awhile… just like the high it gives.

Heavy Duty Fruity is definitely one of the strongest smelling cannabis varieties I’ve ever grown.

It seems sensi don’t ship to the USA

But I think they are opening a USA division ?

Cannabis pics from most growers are usually either out of focus or using so much zoom that you still can make out what you’re looking at. Kind of like Bigfoot pics.

I expect the trichomes to look a certain way when it comes to certain strains.

Most strains I grow, I want, at least, all cloudy/milky trichs. A small portion can be clear or amber, but milky works best for me and my wife, overall, from a medicinal point of view.

I don’t only grow for myself… I have a picky wife, a canna-snob, if you will, that I must also contend with while I grow what I grow.

She’s a Blue Dream fanatic and likes berry strains best and I like that and everything else the cannabis plant has to offer.