Bug hole in main stalk. How to clean/seal it? UPDATE W PIC

Water really isn’t the problem, pathogens are. Let the inner tissue callus over and heal itself.

Furthermore, the IBA in clonex is just a rooting hormone; it doesn’t heal plant tissue.

I use old orange/mandarin peels go keep the slugs and snails away.

Maybe that may help ya.

thanx for the suggestions. I’ve been thinking about putting mulch around them. I do have a sand pile close by. Maybe I’ll put a ring of sand around the mulch ring just for the heck of it. If water getting in there is likely to cause issues, that might be hard to avoid if it doesn’t eventually close. I bent them over pretty early, and now the short bushy ones come out of the ground at a pretty good angle. The hole is on the top side. If nothing else I know to keep an eye on it.

As long as it seals it it is safer than letting the tissues exposed to water, bugs and possible rot or botrytis cinerea. If the plant is not healthy enough she will not heal by herself and its weakness will attire more pests and diseases, no way … 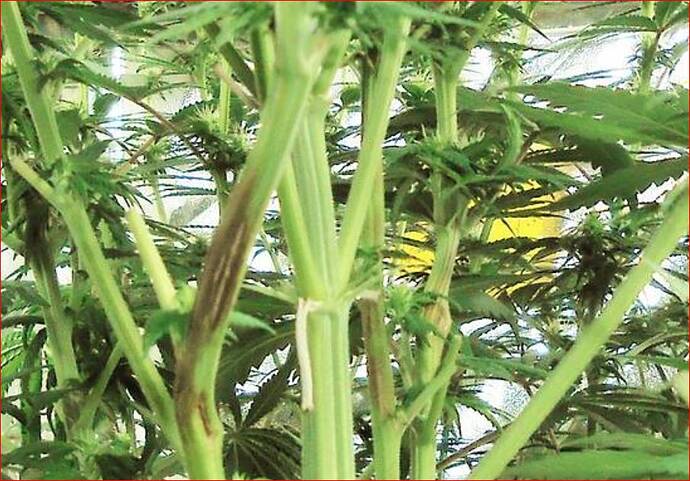 By that logic, you can use peanut butter to spackle the hole. It’s a rooting gel.

You don’t need it.

You usually tend to the absurd in your reasonements, that gel cicatrizes the wound, better than nothing, which is your contribution to this issue …

It doesn’t actually “heal” tissue, it’s just rooting gel. It doesn’t really do anything other than deliver IBA.

That’s the only active ingredient…but yeah let’s take their own advertisement’s word on it.

OP, you don’t need clonex. It’ll be fine if you kill the bugs.

Wish one day you will bring positivity and solutions instead of trying to demolish other suggestions that people may have. When you put a helmet on, it doesn’t heal your head, but protects it, can you see the difference?

By courtesy I won’t tell you what I suspect about you. Now you go with personal remarks, when your arguments finish this is the next step you usually take, pure negativity, not good for this thread or this community …

that gel cicatrizes the wound, better than nothing

Are you suggesting that every time a cut is made, that cut should to be sealed with clonex?

Any wound or weakness in a plant (like leaves with nechrosis) is an entrance gate for patogens, bugs and diseases. Clonex gel would heal and cicatrize, it is also used for that …

Clonex is for cuttings, not cuts or wounds on plants.

Remember, Clonex is a thick gel … it sticks to plant stems to aid cuttings throughout rooting .
• For use on freshly taken cuttings

Why are you arguing nonsense

I suspect you are right

So like your mate the only solution you bring to this thread is attacking mine ignoring what the webpages says about sealing, anti fungal agents and preventing infections, arguing it is fake publicity and trying to revoque my solution with the argument that I may be a new grower? Brilliant, any more dogs in the wild bunch to come? I hate negativity, it brings to nothing useful, let the OP read all the info and decide from himself … 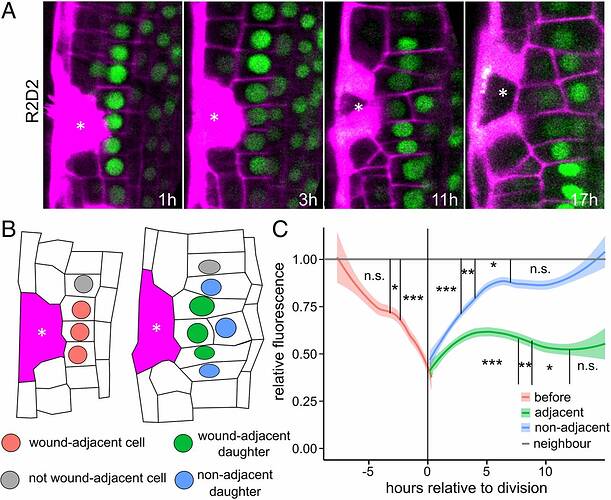 Plants are sessile organisms that cannot evade wounding or pathogen attack, and their cells are encapsulated within cell walls, making it impossible to use cell migration for wound healing like animals. Thus, regeneration in plants largely relies on...

To investigate wound healing, the scientists injured a thale cress root with a laser. They then tracked cells during regeneration with a microscope. The scientists found that the hormone Auxin, which is essential in plant growth and development, also plays a vital role in wound healing. It builds up in those cells directly touching the wound and facilitates the plant’s response to injury.

The role of plant hormones during grafting

For millennia, people have cut and joined different plant tissues together through a process known as grafting. By creating a chimeric organism, desirable properties from two plants combine to enhance disease resistance, abiotic stress tolerance,...

Auxin is also involved in the wound response, with PIN proteins transporting auxin to the wound site, where it triggers vascular tissue regeneration in Arabidopsis stems and pea epicotyl (Mazur et al. 2016; Sauer et al. 2006). For instance, auxin transported basipetally from leaves and buds promotes xylem regeneration following wounding, as removal of these tissues above, but not below, the cut site decreased xylem regeneration of wounded Coleus blumei internodes (Jacobs 1952). Likewise, incised Arabidopsis stems show an asymmetric auxin accumulation due to a block in basipetal auxin transportation (Asahina et al. 2011). This asymmetry plays an important signalling role during tissue reunion since the AUXIN RESPONSE FACTOR ( ARF ) 6 and 8 promote the expression of the NAM, ATAF, and CUC (NAC) TF ANAC071 above the cut, while inhibiting expression of RELATED TO AP2 6L ( RAP2.6L ) (Asahina et al. 2011; Pitaksaringkarn et al. 2014a). In contrast, lower auxin levels below the cut leads to a decrease in ARF6 and 8 expression, thereby releasing RAP2.6L inhibition. ANAC071 and RAP2.6L promote pith cell division and their expression in the top and lower part of the cut site, respectively, is important for successful tissue reunion of incised stems (Asahina et al. 2011). Moreover, ANAC071 both promotes the expression of and directly binds to the promoters of auxin-inducible XYLOGLUCAN ENDOTRANSGLUCOSYLASE / HYDROLASE ( XTH ) 19 and 20 , important for pith cell proliferation during tissue reunion (Pitaksaringkarn et al. 2014b). However, the downstream targets of RAP2.6L remain unknown. Ethylene and jasmonic acid also regulate ANAC071 and RAP2.6L expression, respectively, and are likely also important for wound healing.

Furthermore, the IBA in clonex is just a rooting hormone; it doesn’t heal plant tissue.

Thanks Loki for enlightening what auxines can do, healing of the plant is done with the formation of callus, the IBA contained in Clonex Gel helps with this process …

I put medical tape around my wounds
It’s breathable too

For the millionth time, we aren’t propagating the plant. The “root bump” callus and the wound callus aren’t the same thing.

If it was, we’d be putting IBA on cut tree limbs, but we don’t. In fact, it isn’t even recommended to use a sealer anymore.

Not sure who this mate of mine is you speak of. You made a lengthy reply accusing me of attacking you. I stated some facts and asked a question you didn’t bother to answer.

ignoring what the webpages says about sealing, anti fungal agents and preventing infections, arguing it is fake publicity and trying to revoque my solution with the argument that I may be a new grower?

Show me where I stated this as “fake publicity”. If you read this much into everything you read, then I can see why you are confused as to what was being explained to you earlier regarding sealing plant wounds. If done, it is generally something you do immediately to seal things out. Otherwise you can seal things into the plant that could do more harm than good. It is your argument clonex will “cure the wounded stem” that is simply false.

Agreeing with the point that you are a newer grower is simply an acknowledgement to your lack of experience. You state my only argument is that you are new, therefore you are wrong, and that is my only point.

I believe the point that @vernal was making with sealing it with peanut butter (which I took as a joke played on basically at this point it really doesn’t matter what you seal it with). Or as @STIGGY mentioned med tape. Here are some others, paint, nail polish, caulk, electrical tape. I think we are all referring to OP @RandomHumanoid plant that has an old nearly healed wound. At least that is the plant I’m referring to, the only plant I’m referring to. The concern was possibly a slug trying to gain entry and that a caterpillar had already killed another plant.
@STIGGY suggested spinosad for control, good advice. Using clonex (which will wash off) to seal a wound that is mostly healed, not so good advice.

let the OP read all the info and decide from himself …

I agree, and if someone is giving false information that should also be part of the discussion. Something you may not understand as a newer grower. Bad advice can ruin someone’s grow.