Disclaimer: Probably not everything I say here will be true. I’m just a guy who reads and experiments, and does my best to continually improve.

Skip to the recipes

Part 3 Give me the damn recipe! This will be more like a collection of recipes as I design and update them. PP Simple Polyphosphate simple is a minimized recipe. It uses the fewest number of fertilizers that still meet reasonably good targets. Makes 250 gallons (approx 1000 Liters) of nutrient solution (divide by 250 for per-gallon mix rates). Fertilizer name grams Magnesium Sulfate (Epsom) 600 Plant Prod Chelated 40 Potassium Nitrate 150 Haifa Grow Clean 440 Calcium Nitr…

I won’t get too in depth into nutrient basics. There are already plenty of resources online that can do a much better job detailing the roles of various nutrients in plants. However, something that is less commonly discussed is when cannabis requires them. In some amounts, all nutrients are needed at all parts of the grow cycle.

Nitrogen is probably the easiest macronutrient to provide. For the most part, it can be provided at roughly constant amounts throughout the grow. We tend to think of using nitrogen more in veg, but in fact, it is only higher, in relation to potassium – which is consumed much more heavily in flowering.

Phosphorous is perhaps the most difficult nutrient to get right, and for reasons I’ll discuss later, needs special consideration when mixed. Phosphorous is consumed very heavily for a short period of time. The most important time to feed P is in the first half of flower. It is most critical somewhere around weeks 2-4; however, it can be beneficial to begin increasing P even in mid to late veg. 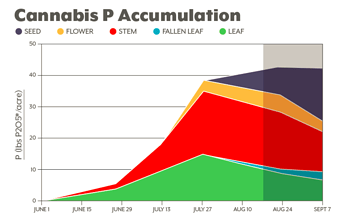 Here you can see the sharp rise in P accumulation in the month of July (outdoor growing). I’m not sure at what latitude this refers to, but in most Northern latitudes (30-50N), this is going to be late veg and early flower.

To make this situation even worse, phosphorous deficiency can be caused by overwatering. Often people will flower shortly after a transplant in containers, which compounds the problem - wetter media since roots have not filled out, and sharply increasing demands for the nutrient.

The potassium/calcium/magnesium recipe is especially important in coco coir. Coco has a propensity to bind cations, and it will prefer calcium to potassium. Often “unbuffered” coco contains high levels of potassium. It can soak up calcium and release potassium, and throw this ratio off balance (usually resulting in calcium deficiency).

Calcium is practically a macronutrient in cannabis, and it has very few options for synthetic sources. Because calcium sulfate does not dissociate in water, it cannot be used hydroponically (unlike magnesium sulfate, which is also called epsom salt). There are some forms of chelates, but their density of calcium is too low to be used as a primary source. Most commercial formulas will provide 100% of calcium requirements from calcium nitrate.

Bookmarked this one, need some slow and concentrated reading

Here’s some principles that I go by, in order to make a fertilizer recipe that most plants seem to tolerate well.

Limit the Sulfur! It is my belief that most recipes provide far too much sulfur, where it could be used in other places. Burned leaf tips can often be caused by sulfur. EC is raised unnecessarily, and spent where the plant does not need it.

Where does Sulfur come from? In order to meet magnesium requirements, Sulfur is mostly provided by epsom salt. Secondarily, many recipes will use potassium sulfate as a “get out of jail free” card to raise potassium levels, without affecting other macronutrients. Not a good idea, in my opinion. If you have 100ppm of sulfur, you could move 40ppm of that into something more useful and lower the total EC.

Crank up the calcium! Anybody ever seen a calcium toxicity? Didn’t think so. I’m not even sure it’s possible. What this typically means is that you will have to use a lot of calcium nitrate. Start your recipe by hitting your calcium target. This number is not going to be very negotiable, so hit your calcium numbers first, and then see what your remaining nitrogen budget will be.

Phosphorous… it’s complicated. In my opinion, I’d love to just use a bunch of phosphorus. Beyond a little more stretch, there’s almost only positives. And in my experience, the amount any one strain requires is highly variable.

But – here’s the rub. High levels of calcium and high levels of phosphorous are not compatible. If you see the white stuff that precipitates on the outsides of your pots, or on the top of your hydroton – I’m pretty sure that’s calcium phosphate. Calcium and phosphorous precipitate into solids, making them unavailable to your plant. That’s not good for anybody.

Phosphorus -
Haifa GrowClean - this is our polyphosphate product. It is like MKP, but polyphosphate and a slightly more favorable amount of potassium.
Monopotassium Phosphate (MKP) - to make up the balance of phosphorus and add potassium, slightly acidic
Dipotassium Phosphate (DKP) - like MKP, but with more potassium and alkaline. If used, should be no more than about 1/3rd the amount of MKP used. Otherwise, phosphoric acid will need to be used later, which will add phosphorous anyway and defeat the purpose.
Magnesium phosphate - Good orthophosphate that adds a little magnesium

Part 3 Give me the damn recipe!

This will be more like a collection of recipes as I design and update them.

Tip: For both of these formulas with coco, potassium nitrate can be swapped for calcium nitrate 1:1, in order to gracefully boost Ca and reduce K without changing N. No more than about 50g should be swapped.

Tip: For both of these formulas with coco, potassium nitrate can be swapped for potassium sulfate 1:1, in order to reduce N and increase S.

Awesome! Thanks for taking the time to write this up. Just started mixing my own salts so, I been looking everywhere for proven ratios to run in coco. I have been talking to some commercial operators and they suggest Ca in the 180+ ppm range and, say I can run S up to 200 ppm without any issues. Can I ask what ratio your running currently for veg and, flower? I would really like to find a ratio I can run all the way through with slight adjustments here and there.

I don’t disagree with any of that, necessarily. There is a knob I haven’t talked about, and that is EC / nutrient concentration. If you take the “PP Deluxe” formula and run it at the EC that commercial growers use (2.1-2.2), then it will reach 180ppm. If you have heavy feeding plants, then they will tolerate this.

However, by not spending 200ppm on Sulfur, the formula is much more flexible for EC adjustment. This is what it looks like when you crank it up (without yet adding potassium sulfate). Only 82ppm of Sulfur, which is more than enough. If you had 200ppm of sulfur, then for the same EC, you would take 118ppm of other, more useful nutrients. 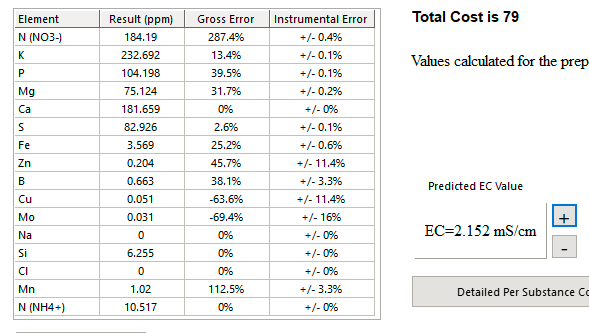 It is my belief that sulfur is typically over-applied in synthetic nutrients, because it helps provide other nutrients (Magnesium via Epsom and Potassium via potassium sulfate) without changing the macronutrient profile. However, most plant tissues contain nitrogen at a rate of >10x the amount of sulfur.

Here, even the “low sulfur” recipes I’ve attempted above have nitrogen at only a little more than 2x that of sulfur, which I think is likely still an oversupply.

On the calcium, I’ll post a recipe a little bit later that uses calprime in place of calcium nitrate. I think it’s a interesting fertilizer that has some applications with cannabis.

Edit: Ignore the “Gross Error” column. It is referencing some random targets I had set a while ago.

Very good read Lefty. Jam packed with very useful info. Thanks for putting this up. Following and bookmarked.

You will usually see phosphorous deficiency in early to mid flower, and it will look like dark green top leaves (also with clawing), but the lower leaves will be yellowing.

You just described exactly what is happening with my Blk Vietnam 164 S1s — Thank you!

Definitely bookmarking this thread to read more in depth when I have more time!

In my last grow,I had some weird yellowing of every damm leaf,from bottom,also showing Little clawing but,could not be nitrogen…I think the plants were in preflowering and the issue was Just this One you are talking about:Phosphorus def

Bookmarked to reread as needed.

Great information Lefty, thanks for sharing.

Was thinking about mixing up a batch of the PP delux to try to hit the elemental values suggested but, I don’t have the cal prime, the poly phosphate, or mg nitrate. I’ll try to come close using what I have but, I know it won’t be the same.

You should be a little careful. The “PP” or polyphosphate is safer to use in high levels compared to orthophosphate. The calcium nitrate in the recipe isn’t cal prime, so no worries there. Magnesium nitrate can probably be substituted 1:1 with epsom for a slight loss of nitrate with a slightly raised sulfate. It might be worth reformulating in hydrobuddy with the nutrients you do have.

I hope that giving a few recipes with explanations will help demystify mixing from scratch, to give people a starting point and a short list of nutrients to acquire, and show that it is flexible and highly customizable. Plus it’s fun

Dude, when did you level up, I missed it!

A little update to make here – I am currently thinking that the plant prod chelated micronutrient mix might be a little light in zinc. A more optimal amount is probably about 2x what they provide. I am going to try a split using Peters STEM of about 35g plant prod, 5g STEM.

STEM is a weird micronutrient mix. I’m not sure what its intended purpose is, but it has a bizarre balance of micros. Anyway, it’s zinc is disproportionately high, so it actually works out pretty well in this case. 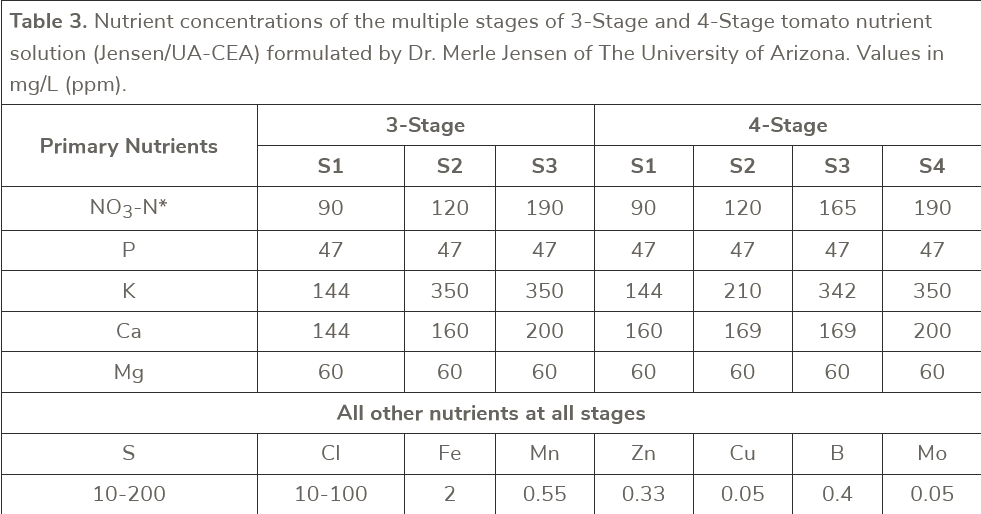 Utilizing an appropriate nutrient solution is one of the most important components of establishing and maintaining a hydroponic greenhouse tomato crop. In hydroponic production, all of the essential nutrients (Table 1) must be provided to the plant...

These tomato recipes trip me out, but I’m going to experiment with similar targets and see how it goes. I think cannabis and tomatoes share a love of calcium that is not normally reflected in other formulas. Interestingly, they use a pretty low amount of N during veg.

Secondly – what they consider to be ‘low’ calcium (144ppm) is very high in comparison to what off the shelf formulas provide. High calcium and low nitrogen is difficult, and they accomplish it by using calcium chloride. I’ve always been wary of CaCl2 – chlorine isn’t needed in high amounts. But if I want to get calcium up that high, I’m going to have to use it.

Here’s what I’ve settled on for “stage 1” – a bit more P and N and less Cl. I’ve replaced the MKP with grow clean for the polyphosphate and higher K ratio. 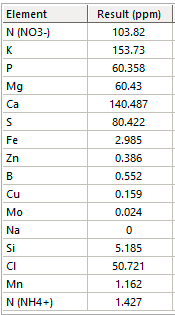 These formulas are fairly simple in some ways. They keep P, Mg and the micronutrients fixed for the entire grow, while N, K and Ca are gradually raised.

That means that I can start with this base mix, and increase CalPrime, calcium chloride, potassium nitrate and potassium sulfate in the next stages of the grow. I’m a little uncertain about the high levels of nitrogen toward the end of the grow, but we’ll just see how it goes.

Cannabis nutriment requirements closely mirror Tomatoes, especially the Calcium. I think you are correct about the late flower Nitrogen though.

Way over my head in here but I can appreciate what your doing here.