Factors that influence growth and development ( Temp and VPD)

RH and VPD
Relative Humidity (RH) is the amount of humidity present at a
given temperature and is expressed as a percentage. When air is
completely saturated, it has a RH of 100%. Temperature and RH are
the two main variables that influence water movement within a plant.
Evapotranspiration is a process plants use to cool leaf surfaces. As
the temperature of a leaf increases, plants will pull more water from
the growing media. Water is evaporated from the leaf surface and
as a result the leaf temperature decreases. Increasing the
temperature in your controlled environment will reduce your RH,
causing an increase in transpiration rates and water demand, while
decreasing your temperatures will increase RH, causing decreased
transpiration and water demand.
A good tool to use when growing
in a controlled environment is vapor
pressure deficit (VPD). VPD is a good
indicator of plant stress brought about
by either excessive transpiration
(high VPD values) or the inability to
transpire adequately (low VPD values). When the VPD is too low (humidity too high) plants are unable to evapo¬rate enough water to en¬able the transport of mineral nutrients (such as calcium), and in cases where VPD is extremely low, water may condense onto the plant and provide a medium for fungal growth and disease. Table 8 provides VPD val¬ues based on temperature and humidity. Generally, you will want to grow your plants in the optimum VPD range. However, during establish¬ment growth (especially vegetative cuttings), optimal VPD is around 0.3 - 0.5 kPa, which is outside of the opti¬mal range in our VPD table. 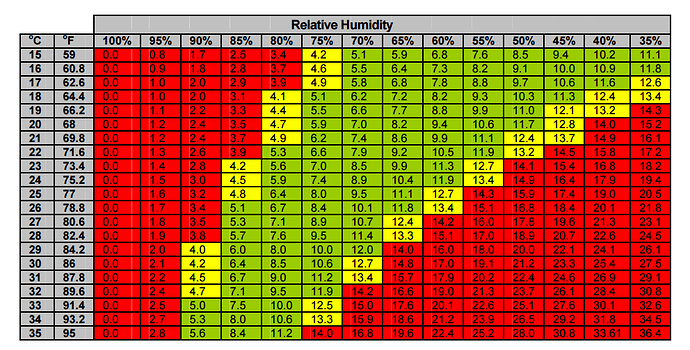 copy and pasted from fluence bioengineering. didn’t feel like writing it all…

hmm what is VPD? I used a VPD calculator and input my temp of 85 and RH of 55 are these good results? what is ideal VPD?

Depends what stage of growth your in ! Low vpd for seeldlings , med vpd for growth and higher vpd for flowering!

ok i’ll check my leaf temps with my IR thermo, i’m in late veg just waiting to be confident i’ve eradicated the thrips before i flip em to flower. i’m using LEDs so i keep my ambient temp higher as the lamp doesn’t provide as much heat to the leaves

1.850 KPa looks a tad to high for late veg box in upper right are your stages info!

@MadScientist can you split this convo in to the VPD thread from my 1st q for me, sorry bro!

@Tinytuttle yes but at the moment i’m only able to control one of these factors which is humidity, so basically the temperature im at right now (which is 32 on the highest leaves, 28 on majority of canopy) the only way to bring it to the acceptable range would be raising my humidity to around 70-75 and actually keeping it there for the entire flowering … because i’ll be upping my wattage and increasing the temperature thru out flower … i think i’m gonna have to stop exhausting in to the room but it’s getting cold enough to see your breath so the side of my house will just be blowing hot air non stop which could be suspicious no? i mean i’m legal but i mean for robbers etc… i might just need an AC?

@MadScientist can you split this convo in to the VPD thread from my 1st q for me, sorry bro!

Come again, please, i got lost…

Edit, you want me to join them together @legalcanada?

to move them, i posted in the wrong thread originally to ask about VPD i didn’t see this thread before posting

Temperature Plant growth and development is primarily influenced by temperatures at the growing points of plants (i.e., roots and shoot tips). When we are discussing temperature, it is important to understand that plant temperature (not air temperature) drives physiological responses in plants. Air temperature can differ by as much as 10° F from plant temperature, depending on your light source (HPS, MH, or LED), light intensity, humidity, and air speed. For example, HPS lights emit a large perc…

to move them, i posted in the wrong thread originally to ask about VPD

Done good sire. Your wish is my command!

side note: it appears the chart i posted is not in kPa. apologies.

going off TTs chart above i’m around 1.45 in late veg but the plants seem to be doing OK

Plants will do OK outside the vpd range, but staying within it or as close as possible you will see increased growth rates, more time between waterings, and a lot happier plants in general.

Like Dewb said earlier in the thread plants will do fine outside the range but for optimal growth the Vpd needs to be in the sweet spot. I queued in on your post section highlighted … so in following natures sign when coming in to flower ( your increasing temp part) in fall, temps are decreasing not increasing when keeping your 40-55 Rh and keeping it a little cooler conditions you’ll hit your sweet spot!

found this in my notes on vpd

then we need the partial pressure of the vapor

vpsat - vpair = vpd
or if we have the canopy saturation (which why we did all that math for both air and canopy)
vpcanopy - vpair = vpd
(more accurate because we are looking for that balance between the pressure the plant creates and the pressure in the environment.)

I was just trying to learn more about this…Thanks Dewb…