Anyone familiar with Flourish Excel? If you have aquariums with plants you may be familiar.
Flourish Excel is a carbon supplement (though it has other benefits, it’s a mild sterilizing agent in concentrations we’d work with, similar to peroxide or a very light bleach solution).

Glutaraldehyde is a source of carbon that can be absorbed by roots and leaf/stem tissue, unlike almost anything else. I used it religiously in aquaria, and since aquaria taught me hydroponics, I wonder if it can be applied in Cannabis cultivation.

Has anyone tried it for herb? I’d like to do an experiment soon. Part of me thinks I stumbled upon something new, part of me thinks I’m a dumbass and it won’t work on C3 short annual plants like Cannabis. I figure if it worked well someone would already be doing it, but sometimes life surprises you.

Any input would be appreciated.

No input but I am very familiar with excel. Use to be into planted tanks. I say go for it and post results. I am assuming hydro

No input but I am very familiar with excel. Use to be into planted tanks. I say go for it and post results. I am assuming hydro

Once I get some clones going I am going to do a test. I hear ya, planted tanks were once my life haha. I had always wondered if the same benefits could be applied to “other” plants. An easily absorbed carbon source is of interest to me since I have an open-vented setup and can’t supplement C02 gas.

Me too! I hope it will work, this would be really beneficial to a home grower that can’t afford a co2 system. For a larger application it is probably not cost effective.

Me too! I hope it will work, this would be really beneficial to a home grower that can’t afford a co2 system. For a larger application it is probably not cost effective.

Oh for sure. Aquarium hobby is a lot like indoor growing…dirt cheap ingredients diluted and relabelled at a 200% (or more) markup. You can buy very strong glutaraldehyde solution (they use it in hospitals to sterilize surfaces) for far cheaper than the very diluted Flourish Excel. I’ll probably start with Excel, and if the results are promising buy the raw material and dilute it myself.

I suppose I’d do 3 clones, 1 as a control, 1 with standard aquarium application rates, and 1 with double strength application.

I’m also interested in it as a sterilizing agent, like adding a few mL of bleach or peroxide to a reservoir, but possibly also a CO2 supplement.

Well, ordered some Excel, when it arrives gonna add some to the feed and see what happens. 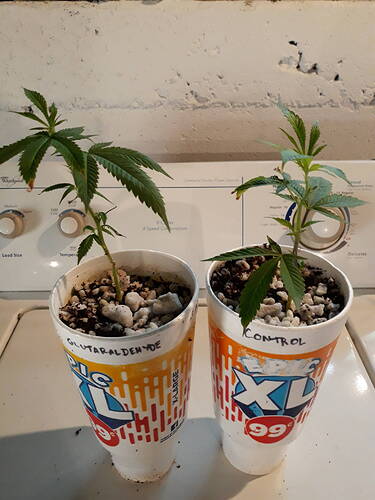 Here we have 2 clones of my Super Silver Haze x Super Skunk. Both taken at the same time, same container, same feed, same number of nodes, same size root system when I transplanted them. They occupy the same position under the light and will be fed at the exact same time and levels as the other.

Granted, in a real lab experiment I’d have more than 2 clones, but this is a trial run. For now, we just have “treated” and “control”.

Excel recommends 10mL/20 gallons for aquarium use. This works out to 0.5mL/gallon. You can go higher but it isn’t good for fish/inverts/biological filters. Glutaraldehyde is primarily used as a disinfectant.
In aquarium use, higher dosages kills algae. Luckily, I don’t have any of those in my weed plants.

After this, I’d like to try it as a foliar.

Well it’s been 2 days and the treated plant isn’t dead, nor does either plant look much different.

So, we now know that a 5x recommended concentration doesn’t appear to be harmful. Question remains, will it do ANYTHING?

Now, since glutaraldehyde is used as a medical/lab disinfectant, it may have some value as a reservoir sterilizing agent, but we already have bleach and peroxide for that, and those are both cheap and effective. Glutaraldehyde also dissipates after a couple days, so it doesn’t have much of an advantage I can see in that regard.

In another day or two I’ll water it again with the same concentration.

They have both begun to grow in earnest; 2 weeks from now any differences will be more readily apparent. 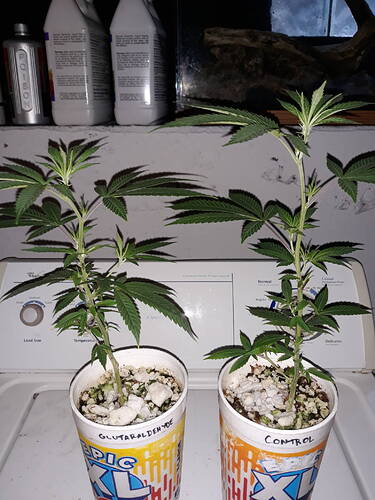 The differences are not so extreme as for me to say it is absolutely one of the other. Even 2 similar clones of the same plant will grow a little differently. I need more time to determine if glutaraldehyde positively impacts plant growth. At least at this point I can say it is not obviously detrimental.

It appears that, at least for the roots, glutaraldehyde isn’t a positive source of carbon, even at 5x aquarium dosage. In fact, it appears to slow down growth a bit while decreasing internodal length. Perhaps there is value in this for super-stretchy narrowleaf plants as an alternative to PGR’s commonly used.

I’ll repeat the experiment with foliar-applied glutaraldehyde soon. Perhaps that will work, perhaps not.

I’ve been adding a smaller amount of glutaraldehyde to the feed water for the flowering plants at 2x aquarium dosage, if I notice weird stuff happening with the buds I’ll be sure to report on it, but since there’s no control it won’t be very scientific.

I have found a benefit of glutaraldehyde, but it isn’t carbon. I’ve been adding it to my feed water at 2x aquarium dosage. 1mL/gallon.

Normally, when it’s warmer, every so often I’ll get fungus gnats. Who doesn’t? They’re basically unavoidable if you use coco or soil. I can spray with a pesticide if and when I start seeing multiple flyers, but a few will be back in a month or so.

Since adding glutaraldehyde, I haven’t seen one single gnat. Haven’t sprayed anything in quite a while. The sterilizing effect must prevent them from breeding, or kill the eggs. I like this stuff better than bleach, and it lasts longer.

You heard it here first. Excel at 1mL/gallon will prevent and eliminate fungus gnats, and help keep your solution sterile, while lasting longer than hypochlorite. It is also so cheap that it’s nearly free. This could be very interesting for coco growers.