Tony, brother, my man…it’s a pleasure to see you here! I’ve heard your name before. Looking forward to this.

Chem is a strong strain and may add a little more ‘diesel’ to the overall flavor, but your Gorilla Bubble should increase overall strength by a few percentage points.

I’m learning a lot on this project. It’s like being in the twilight zone or some weird multiverse. I feel like I’m tripping in the garden ha.

GB bx5 male on the left myco chem bx6 on the right.

These are top selections from each line. I tossed all of the GB sour b runts about a week after sprout and kept the tall glue leaners. Repeat at 3 weeks to weed out hybrids.

I also saw similar ratios of phenos in the chem bx6 as I do in gb. A group of taller phenos like the male below, majority of a very uniform hybrid group and the runty pheno but in chem form. The sour b from the gg4 did the same in that line ha. I’ve kept one of the chem bx6 runts I will cross to a GB runt later on to look through a recessive version RIL.

This pic is also a prime example of shooting response to topping that I select for in every line. Fast response from topping with excellent shoot elongation as opposed to poor or stunted responses many plants can show.

I agree desertgrown! I’m also hoping to see some synergy in flower formation too. The GB is dense like sour b in general while the chem bx nugs I’ve seen a a bit larger but less dense in general.

Anyway while I’m babbling here they are! 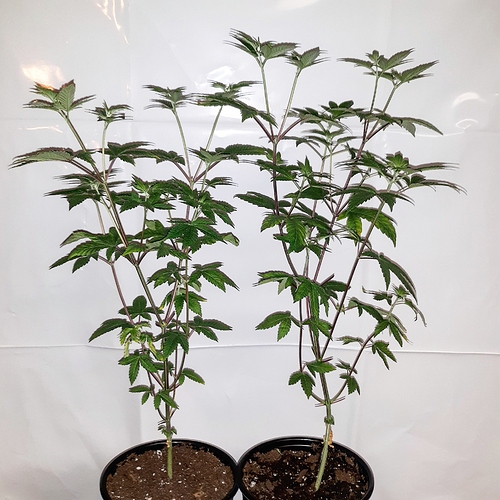 And here is the chem bx6 runt. Maybe 1/4 normal size, revealed itself at sprout just like GB runts!
Chem version instead of sour b leaves…
If you’re familiar with gb runts you can see why this adds to the twilight zone feelings lol 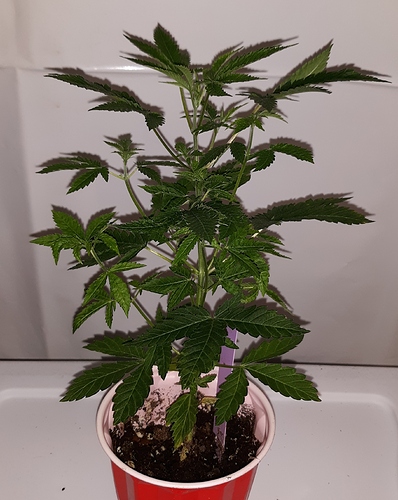 These plants are mirroring each other… and they are essentially completely different strains?
Fascinating, to say the least, in looks alone, but also a fine lesson in ‘genetic inheritance’ at work in real time.
GG lends the obvious, visual dominant, traits in both plants pictured. The only slightly noticeable difference between the two is in the leaves, from what I can see. Both show terrific auxin levels in their main growth shoots, no doubt a GG trait seeing how uniform they appear and the overall structures are nearly identical.

These kinds of comparisons are rare to see in grow forums, yours is not a simple side by side like the norm… it’s much more complicated than that. People truly interested in learning the ‘how’, ‘what’ and ‘why’ of IBL breeding should follow this thread and use its information accordingly.

You are finally getting close to the end of the long road you’ve been on Tony!

Indeed brotha. A helluva ride, Anyone remember the uhaul move in the middle of a bx seed run? Wish Dansbuds was still with us… does close to a decade count as history ha. I still have something special of Dan’s gb to do when the time is right. Cant beleive hes been gone a little over a year now. Still have a heavy heart. Hope he can still see… anyhow…

Well then, Shall we?

3 in front are unsexed chem line bx6.
Yellow hungry one is a old bx3 of mine for control.
The rest GB bx5. 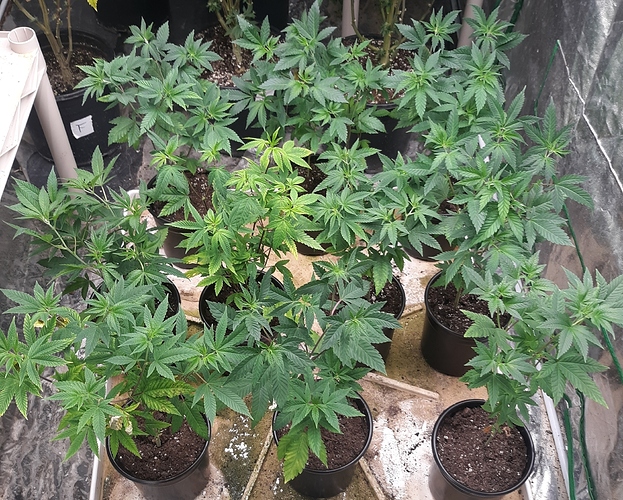 Creeping up on week 1. What a lovely little population eh?
Hungry. I’ll feed at 1.5-1.7 ec until the stretch is over then a steady 1.2 Pretty vigorous. The quality hlg sabers help.
More importantly to note inbreeding depression hits less hard when the recurrent parent is heterozygous! A more homozygous plant will show inbreeding depression sooner. Plan your generations accordingly by knowing your p1. 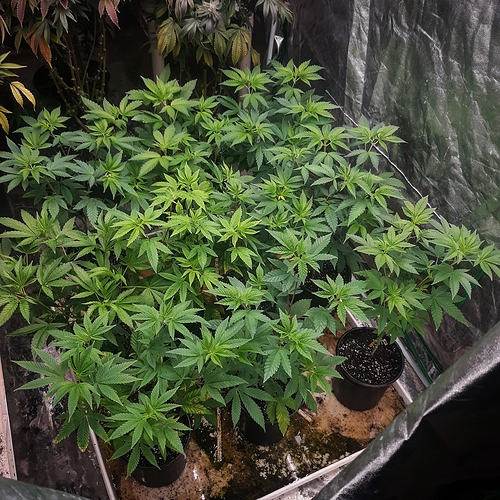 Im watching tony! Whats the best way to get your seeds? GLG or can i get them directly?

They really blew up in 4 days time!

Can I say that here? If not mods delete this. I dont want to cause trouble!
Great lakes genetics or dcseedexchange are the legit spots. Neptune says they are in on the RIL drop so we will see how that goes too. All European banks besides logics scamming ass give me the cold shoulder!

Hungry hungry. Pushed it up a bit ec wise tonight. Hopefully no burns and dont stunt them ha! The hlg sabers are really good for vegging and good for flower but wish they had more red in them. I run the old thouie hps on the side for a few hours a day to help out. They do flower fine and yield tremendous but just me nitpicking!

You can’t beat GLG. Dragboat Jeff (dude that runs GLG) just gave $2000 worth of seeds away for an auction for the Australia Fires. Great dude.

Edit: @Tonygreen the plants look great. how are you feeding?

That sounds interesting so does this though I’m on board

Can I say that here? If not mods delete this. I dont want to cause trouble!

No worries mentioning other sites etc. Only issue would be if you were openly advertising, we would ask you to be a sponsor.

I’ve never had joint rolled popcorn before Papa… how does it taste?