No, the runoff mixes the res water a little though, but any heavier sediment usually settles out, saying that some nutrients have some components settle a little like megacrop for example basically just the kelp extract or whatever settles, but the rest stays mixed also my pickup tube for my pump pulls off the bottom 1/4" of the res so it picks up whatever settles around the pump.

Thanks @Mr.Sparkle, I’m thinking of setting either blumats or something like you use, been quiet / silent a must, so having to set a pump to continually stir the reservoir kind of defeats the purpose.

understandable, will say when my pumps turn on with an empty or low reservoir you can definitely hear it if your near by, but its only 5 secs or so every 6 hrs and is decently quite when actually pumping water, also im not concerned about the extra noise when low as its kinda like a “hey im empty, fill me up” which works as a nice mental trigger.

Thanks again @Mr.Sparkle, what do you use as a pump timer?

Left side, Canopy is doing well with the flops i like the front two plants build wise, left hand one is a bit smaller and shorter than the right side one, back left plant is a stretcher with longer thin stems and just lesser imo than the front two and the back right plant is just a plant hasn’t really impressed or popped out to me mind you its also working on some seeds from stray pollen.

Im going to remove the back two plants at some point shortly in order to move over the seeded ones from the other side, as that will free up space for the young ones to take over as much space as they can.

As for the right side yeah doing well. 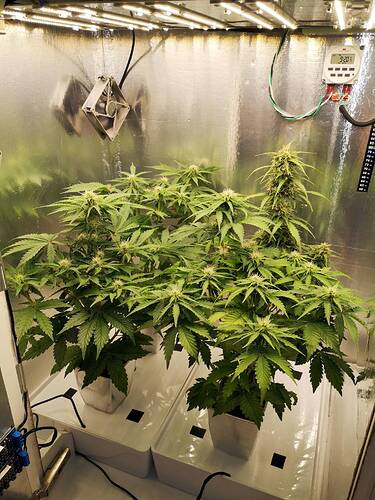 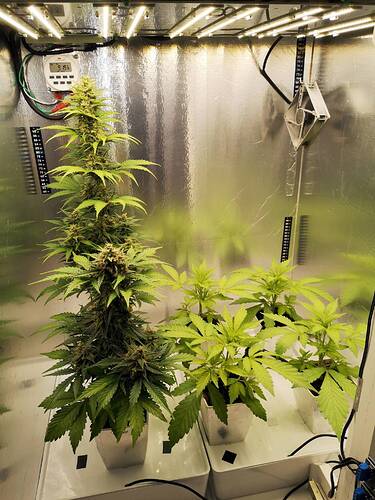 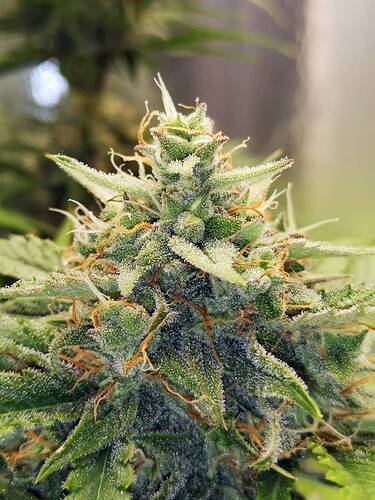 Just a cheap 12v cycle timer, they are about $5 and there are a bit better ones now with longer durations than the 999min max i have on mine.

Here’s an older post on what my irrigation setup is.

@MonsieurMathieu As i promised All they are composed of, 12v pump, 12v cycle timer, 12v power supply “i just have one that runs all of them plus my fans”, a 4 port drip irrigation head, 1/2" irrigation standoff riser, 1/8" drip tubing for nozzles , and a 1/2" pvc cap with a hole drilled in it, and a little 1/4or 3/8" tubing to act as a pickup for the pump, just allows the pump to suck more off the bottom. Cost was about $20cnd per reservoir for me. [image] [image]

As always brother, I love your grows!

I have a couple questions I’d like to ask:
What is that material you have lined your cabinet with? It has great reflective properties and I would like something very much like that in mine.
If you were doing your lights over would you go the same way or something different?

You may scoff due to old verbatim inaccurate info, but Aluminum foil shiny side out and spray glued onto cardboard panels, its better reflective wise that say ultra white flat paint, or mylar emergency blankets, or cheap diamond mylar ive tried from certain dollar stores its also what i cover my pots in.

So each cab side is 3sqft i originally equated out that i wanted to build out to a level of around 35ish-40w/sqft using my old lights as reference, which for me when choosing the xlg-100 driver worked out to be 100w stock or up to 120w when over driven if i really needed or wanted it.

But for my small space and growing consistently autos its just too much and ive been running at around 60-75w instead which is 20-25w/sqft with the eb2’s.

So knowing that i could of reduced my strip count per light from 14 down to 10 which is currently what im running anyways or even less strips like say 8 of them if i was over driving them from nominal levels, and i would of went with a xlg-75 driver instead of the xlg-100 also with the drivers in all honestly the AB series drivers with the added dimmer ability isn’t needed as the plain A series drivers with the built in IO current screw is all i would of needed, would of saved about 30% doing that, but its all a learning experience.

Also maybe a color temp change on the strips to be in the 4000k range instead of 3500k but that’s just a preference thing and just me.

I read the specs, you have solid equipment (I worked in that industry for 20 yrs).
Where did you get those? Digikey?

Yeah digikey, but eb2’s strips are mainly out of stock but there are other options.

yeah been using them for years for electronic parts, and a sale is a sale.

Oh that’s cool! That also explains the corporate discount they give out…
I did corporate accounts with them for decades.
I figured they would be like McMaster Carr, if you don’t have a Dunn & Bradstreet rating - bugger off…
Good to know my fav. toy store is still accessible!!

All looking quite good, removed the lanky GT2xSBR and kept the remaining two, the front one i think will be the seed candidate due to its resin production, also removed the other flowering plant which was making decent bud i just wanted to free up space so i could move over the seeded plants.

Also spaced out the young DarkSpark Green gen 2’s so they can utilize the full cab, and did a couple leaf tucks on them. 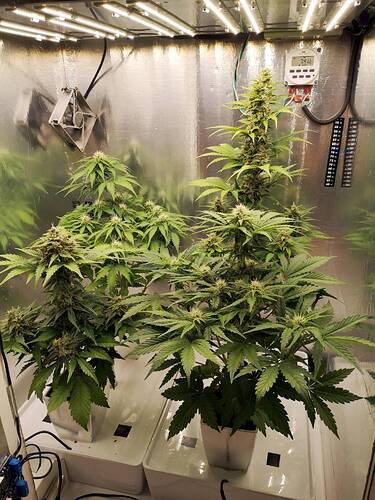 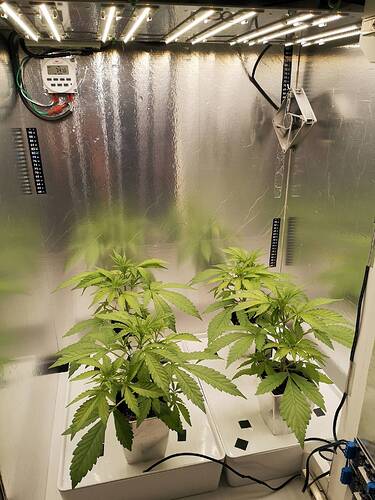 I’ve almost started my last 4 a few times. They are amazing and always produce a great plant. Legendary.

Pollinated the chosen GT2xSBR today, and made it so that they are only running off of one res for my ease, now its just waiting till there done.

As for the right side, The DS gen 2 greens are at 3 weeks and are taking off, being doing some minor leaf tucking just to get them to bush out a little, snapped off two fans by accident but they didn’t have issues with that. 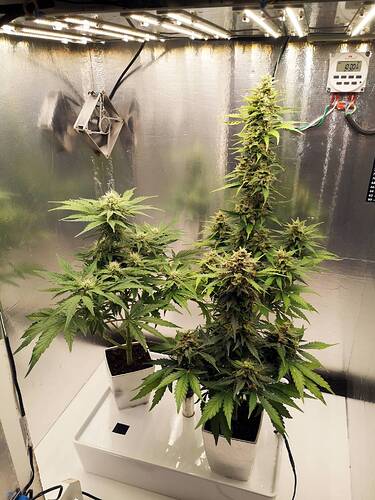 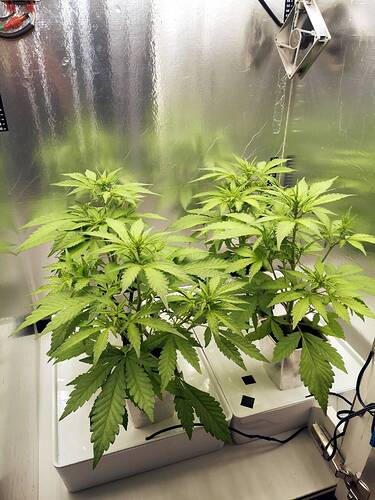 Your grow is spot on perfection. Awesome yields, killer turnover times, fire buds and always the cleanest grow on the site. Beautiful, as per usual!!!

Hello Mr. Sparkle. I have been looking at your thread and I think it is great the effort, dedication and perfection with which you carry out your crops. Congratulations

I just grow to have fun and try new things and improve where i can.