I’ve read through a few of your journals and had a couple of questions if you don’t mind.

Do you light proof your awesome little cabinets? I personally always found that the hardest part of making a new grow cabinet and was wondering if you had any tricks?

Also, in your besta cabinet I saw you had some fans for circulation. Looked Ike they were adjustable on some sort of wire? Could you explain maybe how those worked and how you put them together?

It has been awesome to see what you can do in these tiny spaces… Really impressive! Thanks for sharing all the info

OK i broke out my gfs DSLR and actually got some halfway decent pics (for me lol). Here’s the best 2 imo…I’ll put more in my thread I don’t want to clutter up Mr Sparkle’s thread too much 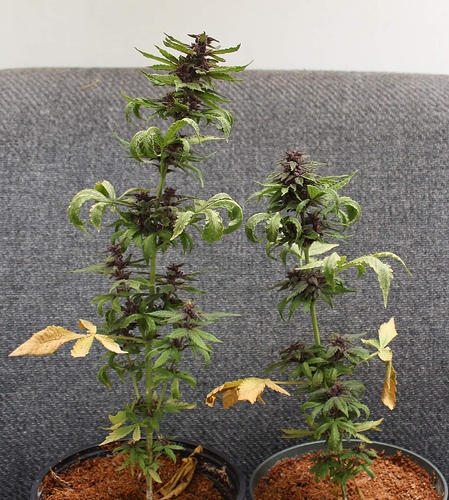 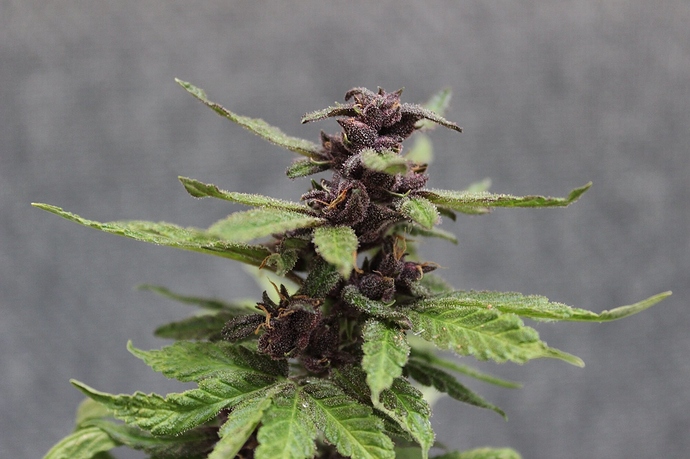 Do you light proof your awesome little cabinets?

Yes, opencell foam weather stripping for the doors, and my intake has a black filter foam as an added light blocker but design of how air is drawn in helps alot

Looked Ike they were adjustable on some sort of wire? Could you explain maybe how those worked and how you put them together?

Thicker gauge copper wire with two loops bent on one side to stick screws through and just a 90 degree bend on the fan side to keep it on.

Can you show us more details on your watering? Where did you buy the parts?

I have a pic at home I’ll upload later today if I have the time, and just eBay and local hardware stores for parts

Nah man go ahead, and yeah looks seeded, just let them go long 9+ weeks then dry them with seeds still in the buds, and you can always pluck a seed to check on ripeness, if they are ready to fall out on there own your usually golden. But keep in mind those look like crinkle mutants to me but could be grow induced.

Thanks! They didn’t crinkle until about 2 weeks of flowering… I’ve been blasting them in direct sun about 8 hours a day and I think it stressed them a bit. Also, pregnancy can be a hard time lol

I’ll leave them for another two weeksish and they should be great. As far as I read every seed will be a photo due to the trait being dominant, right?

Correct they will be photoperiods

All they are composed of, 12v pump, 12v cycle timer, 12v power supply “i just have one that runs all of them plus my fans”, a 4 port drip irrigation head, 1/2" irrigation standoff riser, 1/8" drip tubing for nozzles
, and a 1/2" pvc cap with a hole drilled in it, and a little 1/4or 3/8" tubing to act as a pickup for the pump, just allows the pump to suck more off the bottom. Cost was about $20cnd per reservoir for me. 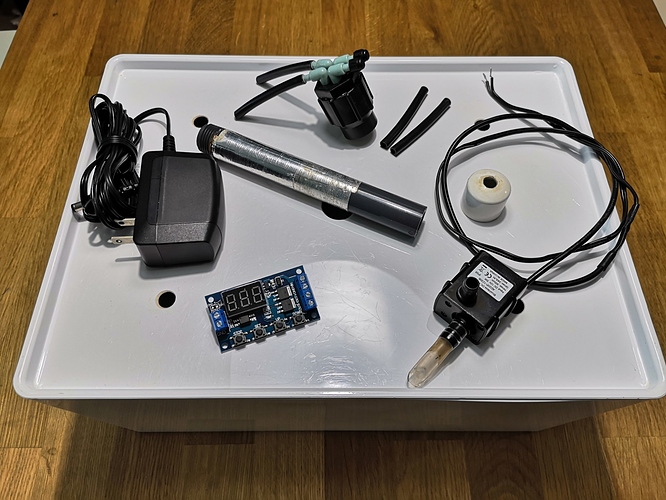 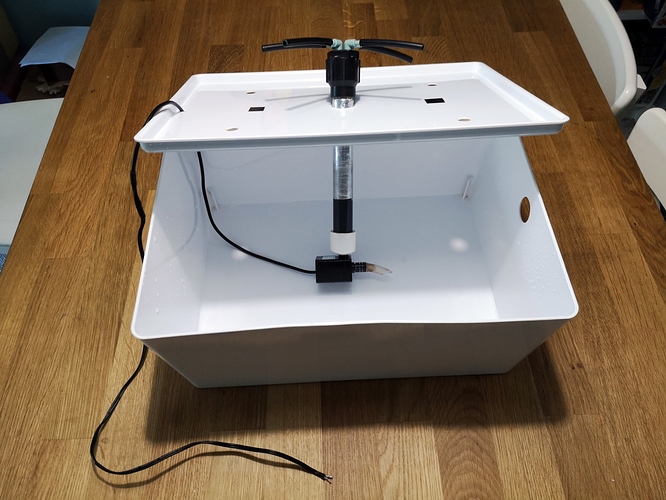 Thank you i might build something similar to this:).
Whats your plans for the future strainwise? How does coco workout for you (no builtup problems)?

Well where did i leave off, now that im back from some holidays, thus why there were no updates.

First back on the 26th the plants on the right side had filled out the space, as shown below, i knew i was gonna be in trouble if i left them as such and then took off for essentially 10 days, so i stripped them back hard “way too hard” imo for what i would like but it was more about survival than max things out.

Back on the 26ths 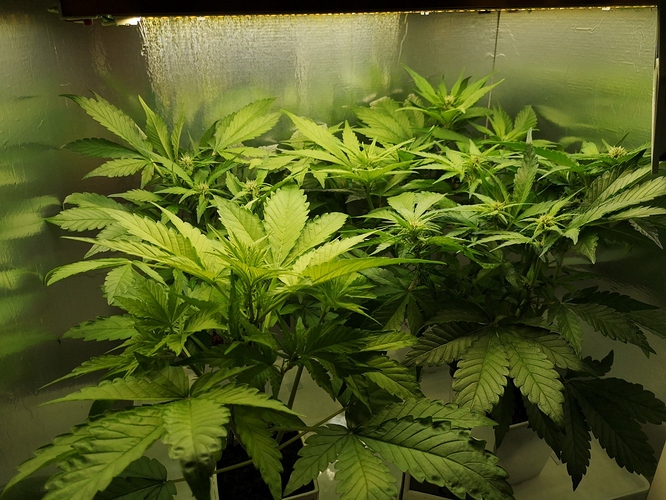 After the Very harsh defoliation 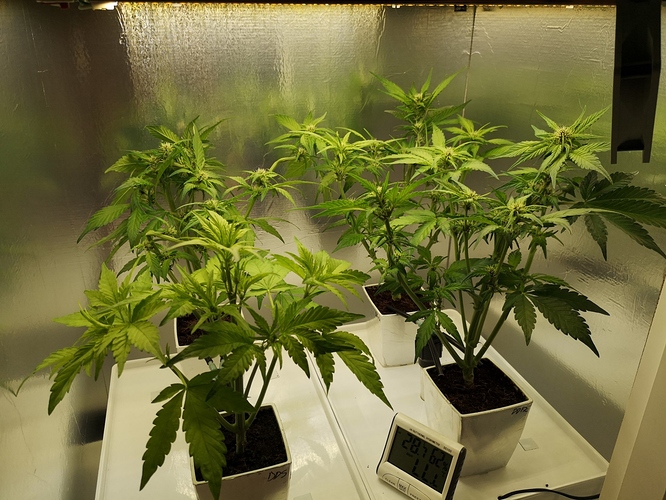 And how it looked 2days later on the 28th when i had a brief stop where i could make any last minute changes, such as flopping over the front left plant “which did nothing” 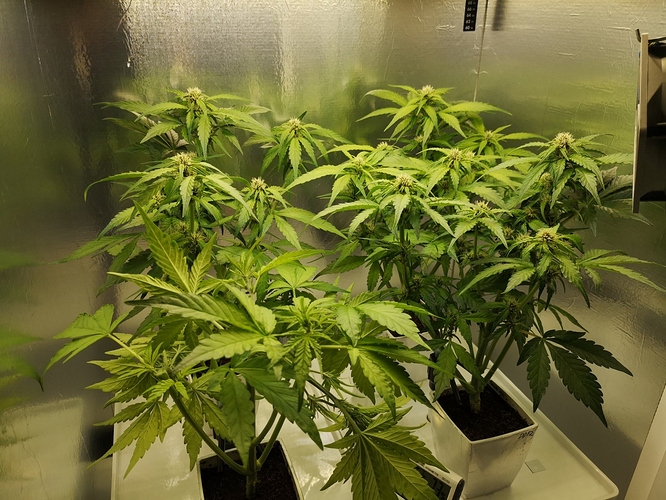 And the other side on the 28th 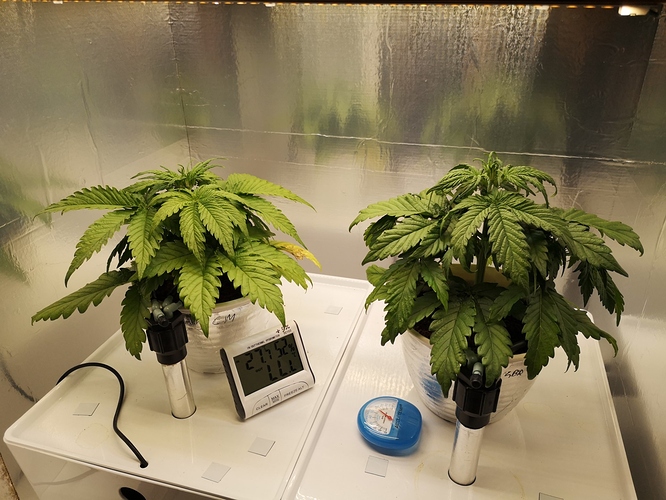 The watering they were all getting was based on just surviving a 10 day watering durations, but saying that the left side should and could of got more watering, but i was half banking on keeping them under fed to keep them small.

Well the left front plant for the right side, yeah it didn’t behave, and im not gonna even attempt to save it. 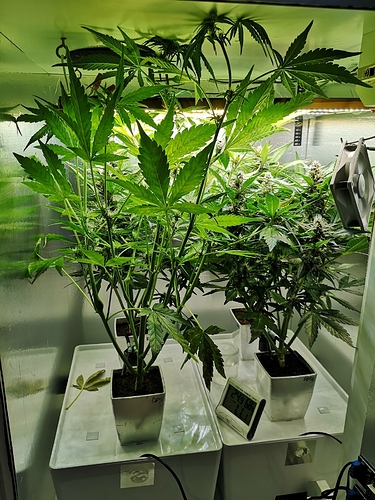 After a little maintenance, and removal of front left plant. 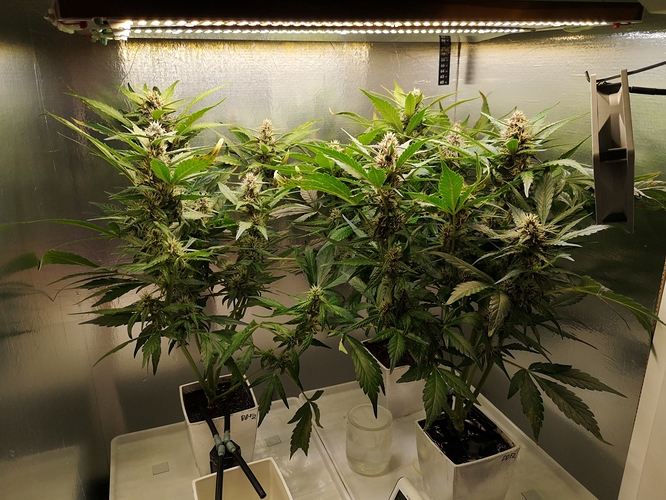 And the the right side, alive i guess but looking a little haggard. 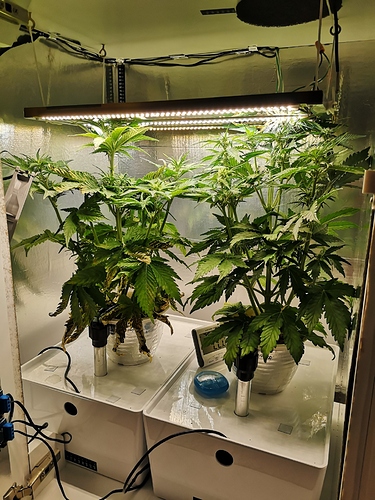 But now with the light raised, tops flopped, leafs plucked and watering increased, so they should turn around. 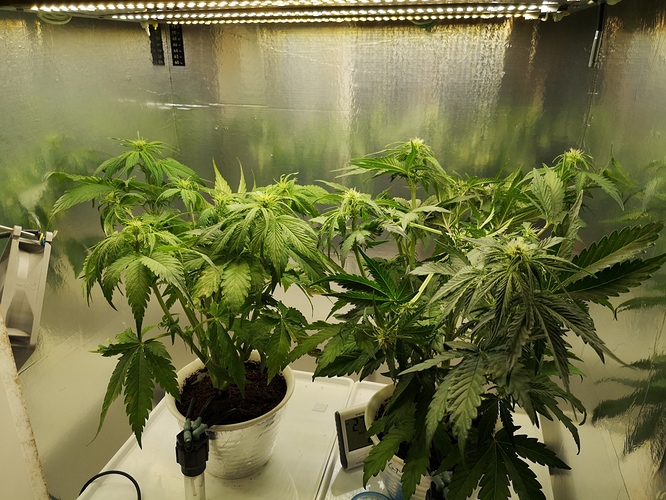 Do you ever have any issues with that pump? I was running what looks like the same pump and I lost confidence in it. Sometimes it would hang up and wouldn’t water. A quick shake and it would work but not great when I’m away.

I was going to use a different pump this winter but you seem to have good luck with yours and I do have a spare I might try.

nope no issue well with these, i may of had one fail in the past but i can’t remember, but there do seem to be different sources of the pumps some better than others, saying that though when i was under driving them in the past, they would hang up as well, just check your voltages cause say if your power supply cant handle that initial turn on serge that could be an issue.

Cool thanks. I’ll double check the voltage and try the other one.

Damn that front left one huh.

I’m surprised its neighbors behaved as well as they did and on autopilot at that.

Right side though took a beating but not out of the fight.

Hey not to clog up sparkles thread. I’d like to ask a few ?'s. Pertaining to some of my autos. Thanks.

Looking great as usual @Mr.Sparkle. I have a SBRxAP1 doing very well and a Green pheno, and finally a DD pheno. They’re coming along nicely. I hope everything is going well for you. It’s always awesome to see what your up to and @toastyjakes. You guys showed me big love. Thank you brother. Have a good one.

@Mr.Sparkle I’m jealous. All your awesome looking plants went unmanned for 10 days. I need to rethink my watering system.

Looking better today with some maintenance, will probably check the res EC and pH later, see if i should make up a new batch yet. 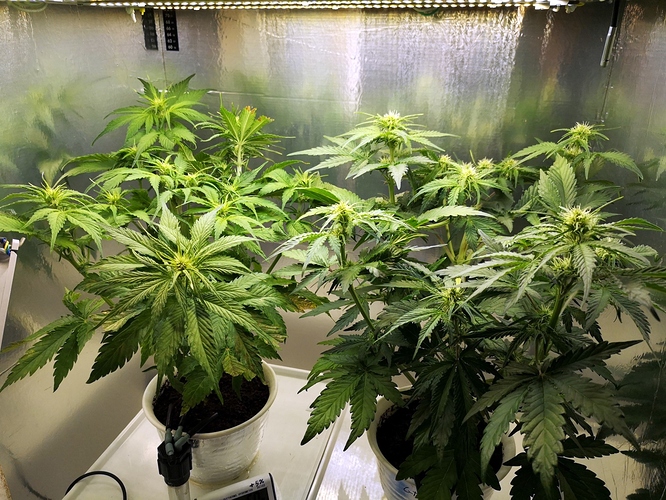 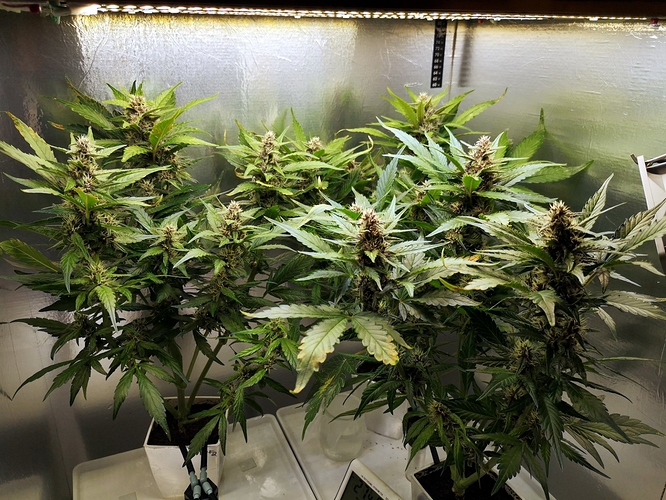 Been looking at different led strips too much as of today and before holidays.

So much so i pulled the trigger for a new setup for one side which will be 14 bridgelux EB series Gen 2’s in the 280mm length coupled to a XLG-100-L-AB driver Total cost with taxes $115cnd which is damn cheap, well before i get some aluminum for a panel even though i have some scraps at work

So if it works should be comparable to my current solstrip setups that have cost me 2-3x the price per side. Looking forward to moving away from solstrips… not that they don’t work, just for other reasons…

Wow that is super cheap, like SIL territory cheap. Cant wait to see how they perform!

Wow great deal on those especially with the driver. I considered something similar for my veg room but I have no clue how to do any aluminum stuff so I went with good ol’ SILs instead.

Plants are looking great! My 2 seeded ladies will come down next Wed (9 weeks) I’m excited for the random cross I hope they take on the smell of your autos!

Yeah they should be interesting and by aluminum work it’s probably just gonna be a baking sheet that’s drilled and tapped just using a mounting screw, looking forward to moving my rope cleats to the front for easier height adjustments… It’s the little things lol

Nice, yet again a simple and elegant solution from Mr Sparkle!