So, I figured I’d try something new this season and apply an IPM program using Marrone Bio Innovations Regalia (improves defense mechanism against mold), Grandevo / Venerate (for mites and other insects).

Anyone have any experience with this stuff or other thoughts? 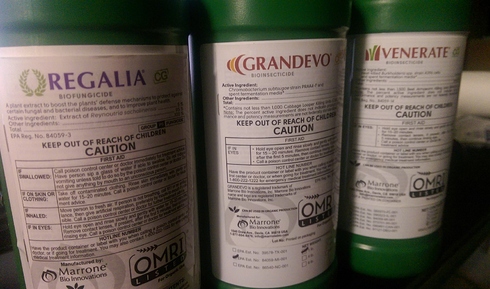 Nothing to contribute in my end, but curious as whether this works since I have had mold before, and did not enjoy the experience one bit.

but curious as whether this works

Me too. I’ve usually been hands-off but am coming to the realization that relying on “rules” around the plants simply doesn’t cut-it in our situation. Tired of emergency fixes late cycle. Maybe a preventative regiment will work out better with less stress all around. We’ll see. Not clear on the safety aspect of this stuff, though.

I’d bet a lot … most folks go through this!

I’m still mid-late veg outdoors & have used only BT 1x a week(versus Pyrethrin/Neem, Spinosad, BT, & essential oils “Tough Love” last year). Paranoia lends me to do a bit of spinosad right before flower but, honestly, thrips don’t really do too much damage as far as I can tell, if natural predators exist.

If I used the phyrethrin/neem broad spectrum that benefit would probably get wacked too.

The one thing sticking in the back of my mind is the early-rain/budrot threat. I may have to put up a roof if they don’t finish quick this summer/fall.

where did you buy the Marrone stuff? are those quarts. it looks good to me, I’ve talked to them at conventions, I liked their philosophy. Is it safe? The active ingredient in Regalia is Reynoutria sachalinensis - it’s a plant! looks like a no-brainer for mold. How do you apply it?

Venerate is a pathogenic plant bacteria. Grandevo is a bacterium isolated from soil under hemlocks. I teased them for not having a Bti proudct, I said it’s one of the most powerful biocontrols. Maybe the licensing is too expensive. They gave me a hat.
Wikipedia:

where did you buy the Marrone stuff? are those quarts.

It’s somewhat pricey so I bought the discount leader via a couple of sources on Ebay. Yes, quart size for the liquids and 1lb for the powder. Next size up is the gallon and 5lbs which has a significant discount relative to the quart size. But, each would have run over a hundred per bottle for the larger size and opt’ed to go small as a trial.
For MA, New England Hydropronics carries their product as well. https://www.nehydro.com/search.php?search_query=marrone&section=product

How do you apply it?

Well, first time using this stuff so I’m going to need to figure this out starting with the labelled guidelines. Foliar spray mainly. Drench as an added possibility for the Regalia.

When pests are present, spray every 3rd day until control is achieved (normally within 7-10 days).
Spray on 5 to 7 day maintenance schedule for preventing new infestations.

Venerate is alternated with Grandevo for insect control.

Non-systemic. Application by foliar spray. Requires PPE.
There are two different rates if using as a preventative versus a curative.
Grandevo at 2-3lbs per acre for the or 1-3 lbs per 100 gallons sprayed on plant matter until run-off. Or, 1.4-4.2 tsps per gallon applied at 2 gallons per 1000 square feet.
Venerate at 30 gallons of water per acre or 2.75 quarts per 1000 square feet. Or, 2.4 - 5 tablespoons per gallon of water applied at 2 gallons per 1000 sq.ft. Sprayed for coverage but not run-off.

Regalia is marketed for control of PM.

Regalia can be tank mixed with either the Venerate or Grandevo (depending on the alternating cycles).

Could also maybe apply some preventive garlic or chili solution, without soap perhaps.
Garlic should help against mold too.

8 natural & homemade insecticides: Save your garden without killing the...

These natural and DIY pesticides are effective at helping to rid your crops of harmful critters, but safe enough to keep from poisoning you and your family.

That’s a good thought as well, thanks.

Very nice!!! I have been wanting to try this since I learned it is a product the Jungle Boys use!!

it is a product the Jungle Boys use

Oh cool, I had no idea. Good to know.

So, I think I’ll try going with a 7 day preventative schedule as follows:

Regalia CG can be tank mixed with either Grandevo CG or Venerate CG.
When pests are present, spray every 3rd day until control is achieved (normally within 7-10 days).
Spray on 5 to 7 day maintenance schedule for preventing new infestations.

Yes, still a bit pricey. As a comparison Venerate for the larger 1 gallon (4 qts) is $133 via Amazon. So, for an additional $40 you get 4 times the quantity.

I could see myself using at least a gallon of mixed solution per week. A quart contains ~64 tablespoons. For 4 tablespoons Venerate per gallon, that’s ~16 weeks of product. This is alternated with Venerate at 3 tablespoons which amounts to ~21 weeks. With Regalia at 2 tablespoons, that’s 32 weeks. So, 37 weeks of the insect IPM and 32 weeks of PM control for $184 at the small container size. Buying the bulk size would divide the cost over the same number weeks by a lot.

Don’t really know how much I’ll need in reality at this point.

If I had a serious outdoor garden I’d commit to the weekly spraying. Especially for mold, here at the coast mold ends the growing season every year.

The products do seem a bit more toxic than Bti. For example Regalia is listed as very toxic to freshwater fish. That makes you wonder, what’s in it. They list a single active ingredient but then the marketing copy says there are several different biocontrols in each product. I understand they don’t want to give away trade secrets.

On third week of application, no adverse effect on the various plants except for, perhaps, using it on cucabits (outdoors). Bees are staying away after application and the cucumbers aren’t getting pollinated.

Approximately the fifth week of application, I stopped applying the regiment to the plants that need pollinating insects (cucumbers). Bees are avoiding those plants and we’ve been force to hand pollination.

Other plants are fairing well, no insect damage and no PM noticed to date.

Rate is approximately 1/2 gallon per week applied once each seven days, alternating formulas each week in a preventative concentration. Application is by a foliar misting.

thrips don’t really do too much damage as far as I can tell, if natural predators exist.

I am under the impression that the powdery mildew on one of my plants is at least to some extent a result of earlier leaf damage caused by thrips. Would not have happened if the weather would not have turned shit, but I suspect the thrips have made it more prone to get infected.

So, an update on the application of the Marrone IPM system. Hmmm, where did the weeks go?

Found some two-spotted mites on a Hibiscus plant that tends to attract them yearly. In fact, this hibiscus seems to attract just about everything imaginable. And, it’s located in the same general location as other plants (I am under direction of the SO and such is life). And, we do not have the ability to tightly control the outdoor traffic in and out of this area.

Also, I’ve found some aphids on a batch of celery.

Although we have been applying the Marrone system to those plants, we have not been particularly thorough on them. Instead have been just doing a quick mist. On the next two applications, I ensured full coverage and have not seen any of those pests since.

With that said, there have been no mites on the four relatively large female and 1 male cannabis plants. There have been no aphids or any of the more difficult to control pests. No signs of PM as of yet. These plants are located in close proximity to the previously noted plants, as well. We have been much more thorough in application for these.

Other plants in this area that have shown no issues include beets, thyme, basil, jalapeno, carrots, radishes, a variety of ornamentals, and Anaheim chilis.

However, a couple of different pests have shown up to take there place for which the Marrone system doesn’t seem to have any affect. Fortunately, those are easy to deal with. There has been the appearance of some sort of very small caterpillar like worms (moth?), snowy scale, and a leaf hopper occasionally. Simply pluck them off and have been good to go.

We’re in the early flower stage and am at the point of where I’d expect the insect pressure to steadily increase.

edit: also this product does not seem to harm the small populations of spiders in the room. Literal spiders, not spiders mites.

We’ve used the Grandevo. It seemed pretty ineffective against thrips, and although it seemed to slow mites down, I wouldn’t consider it a stand alone product.

Not a big fan of this kind of advertising. Makes me think they are more after the quick money.

So far, to date this system seems to be working as expected here. Though, we haven’t had a thrip problem this season. We have found a dead thrip here or there earlier in the season but nothing active or on-going.

Marrone lists a two part alternating schedule (Grandevo + Venerate) for IPM with different application rate / schedule for an active infestation. Don’t know the efficacy or tolerance when using it as a single part solution (Grandevo only). With that said, this program seems to be best applied on a regular IPM schedule for control and “maybe” as an adjunct if attacking an already active infestation. But, idk. This is our first season using this program. Most of our experience is ancedotal as to what we believe has improved.

The more difficult part of the season is just starting for us. So, our “trial” is currently on-going. I can say that we’ve been pretty thorough misting specific plants, top/bottom sides of leaves, etc. And, less thorough on other plants. I’ve been pleased so far but the next several weeks will be telling.

Also paged through the slide deck you’ve uploaded, I didn’t get the “after the quick money” vibe. Looks pretty mild to me, presenting business opportunities / new products in the area of their expertise.