Edit: Note that the last part of the title wasn’t added by me lol @Jellypowered and @KingGhidora but ill leave it as such haha

Time to start up a new thread for the second half of the year as my setups have changed and the old thread is getting hefty.

So if you would like to read the first part there’s the link https://overgrow.com/t/micro-growing-with-mr-sparkle-2018/6897

As per the previous thread here’s a some details about what this thread is gonna be about and some background.

Background
I’m Mr. Sparkle, been growing off and on for almost a decade. Started growing when a friend asked me to look after some bagseeds he had started in his window, as he needed a place for them while he moved to a new house. Needless to say i made a light for them and have been growing ever since.

Grow Style
I’m a micro grower and i try to grow the most out of any space i have. I like to grow lots of plants whether for variety or seed making for myself, but i have recently come to the realization that growing fewer plants with ample space allows me to grow better plants overall with minimal training, and it allows me to better gauge there structure for selection purposes. Currently i grow in coco coir “Canna” with MegaCrop as my nutrient just for ease as its currently hard to beat. I have been strictly running Autos only for the last year or so, just because some surprised me when i was giving them a try, but i see a lot of potential in the good varieties and 9 weeks from sprout is very hard to beat, when wanting to play from seed.

Oh and in order to keep my plants small, i limit the amount of root space they are allowed to have, and “Flop”, train, prunes as needed.

Goal
To progress my own skill and knowledge, share what i can with others, and keep open ears, eyes, and mind to new ideas, as one is never too old or knowledgeable to learn something new.

Current Setup as of June 2018
I’m running a IKEA BESTÅ Cabneit that has been modified for growing duties.

It breaks down like this, the lights are 3x3500k Solstrips. Passive intakes with black filter foam to block light comes in from the bottom sides. Exhaust is handled by a 3000rpm 140mm Noctura Industrial fan which pulls through a simple diy carbon filter. The solstrips have been in essence cool tubed on the heat sink side to reduce internal temperatures and currently two 40mm fans handle that duty.Air circulation in the cabinet is handled by 4x40mm fans.

I run automatic watering systems “varies on setup” that use small 12v pumps which are typically run at lower voltage just to reduce transfer rates.I use two KUGGIS ikea bins with lids as my reservoirs and the lids act as a tray of sorts for the plants, but they have holes drilled under where the pots sit to allow run off to run back into the reservoirs to be reused and to cycle over the water in my coco treating it more like hydro.

Oh and the interior walls are lined with heavy duty aluminum foil which has been spray glued “Super 77” in place. And i guess foam gasket for a door seal and a magnetic Tot-Lok keeps the door shut and sealed.

All said and done its currently tuned to runs at a whopping 100 watts of power from the wall.

Thread Format
This will be a grow journal for my grows and projects, but feel free to join in on discussions about whatever may come up as my previous thread shows.

On with the pics 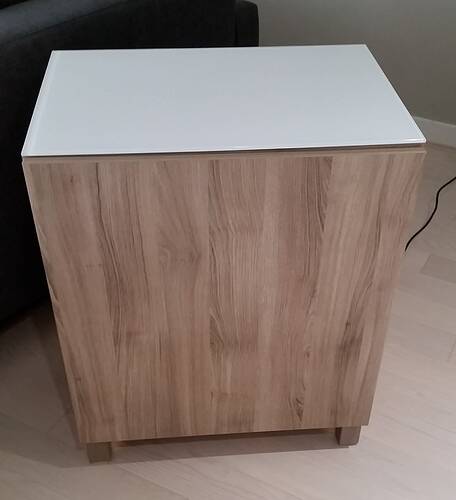 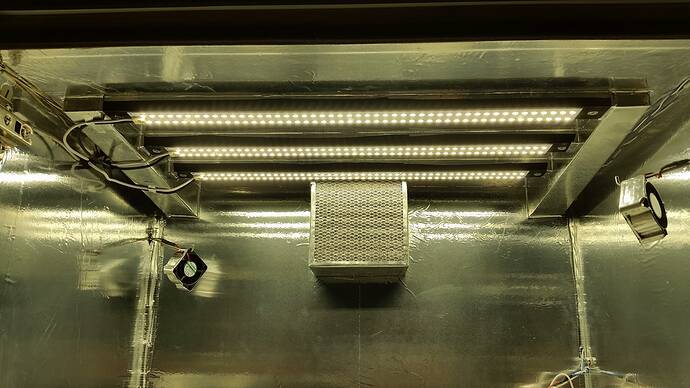 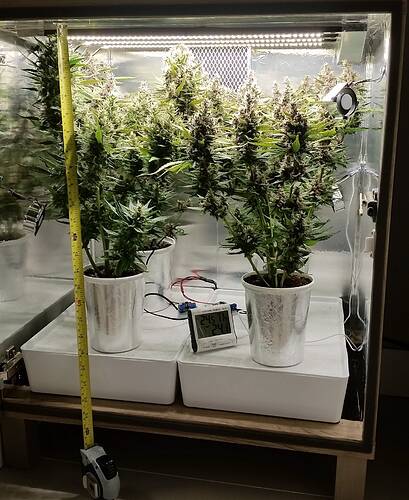 And a just finished first run with the 4 plants that came out of it. Some of my own Dark Devil F2’s “originally from Sweet Seeds” that took 9 weeks from sprout 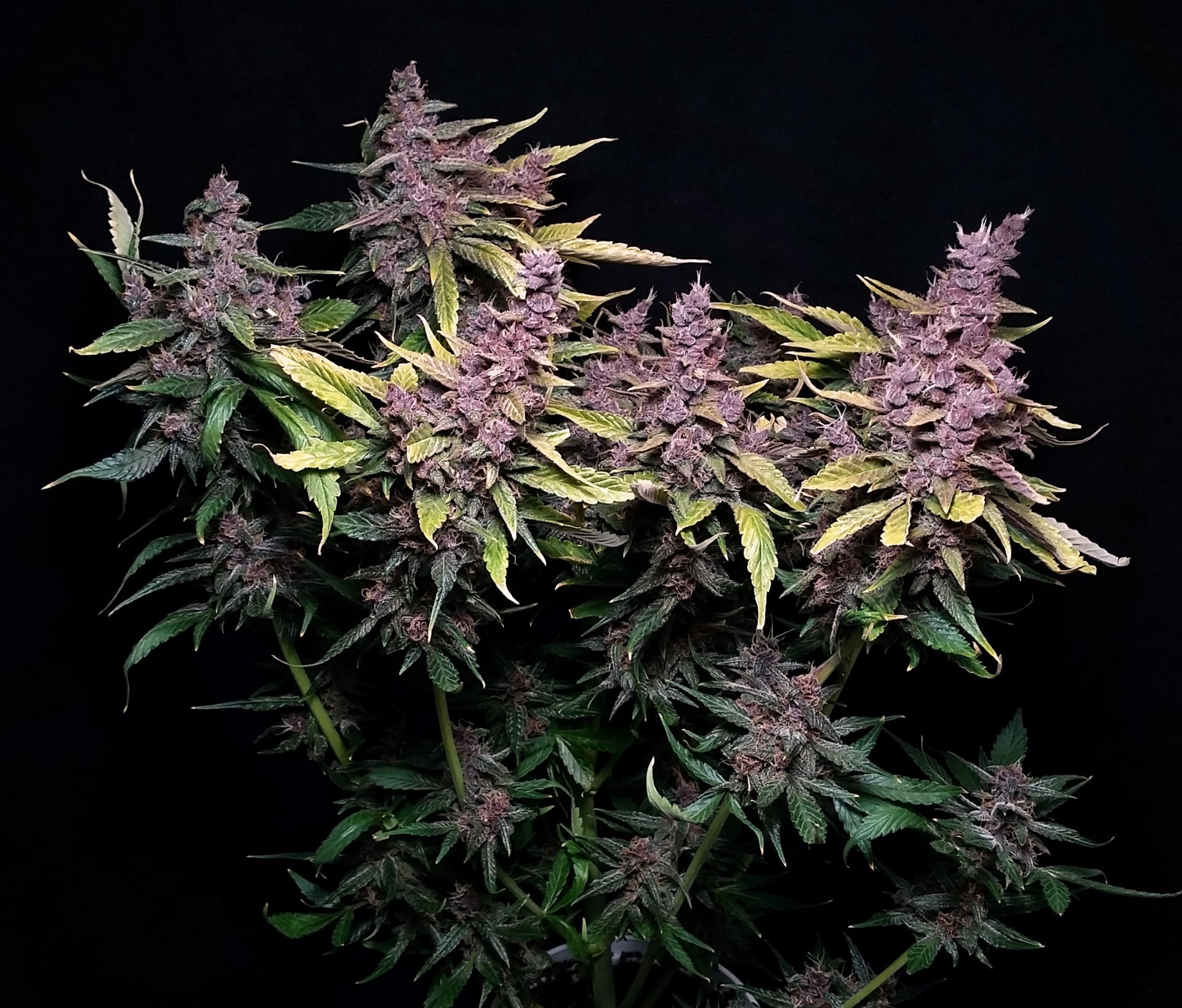 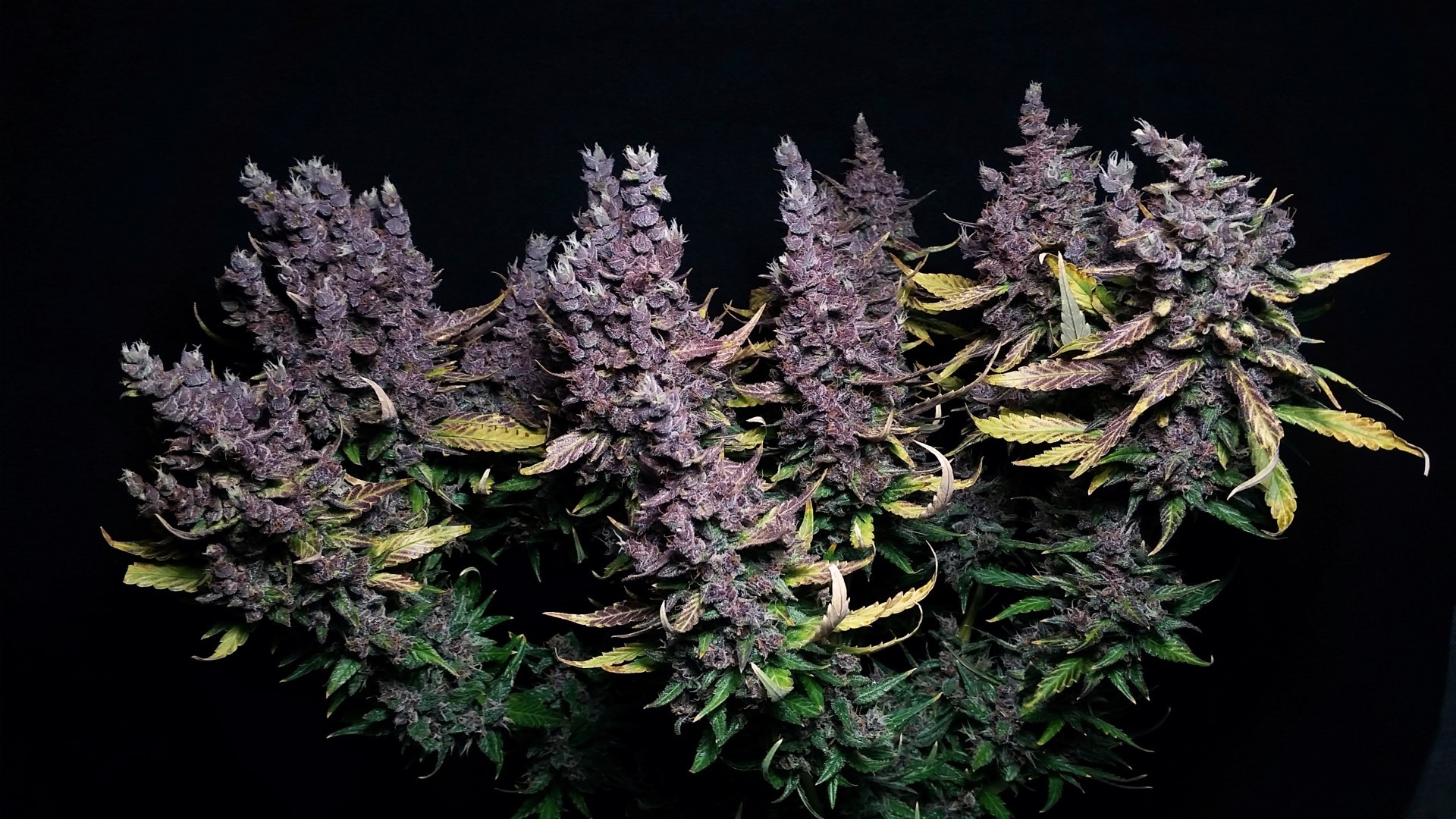 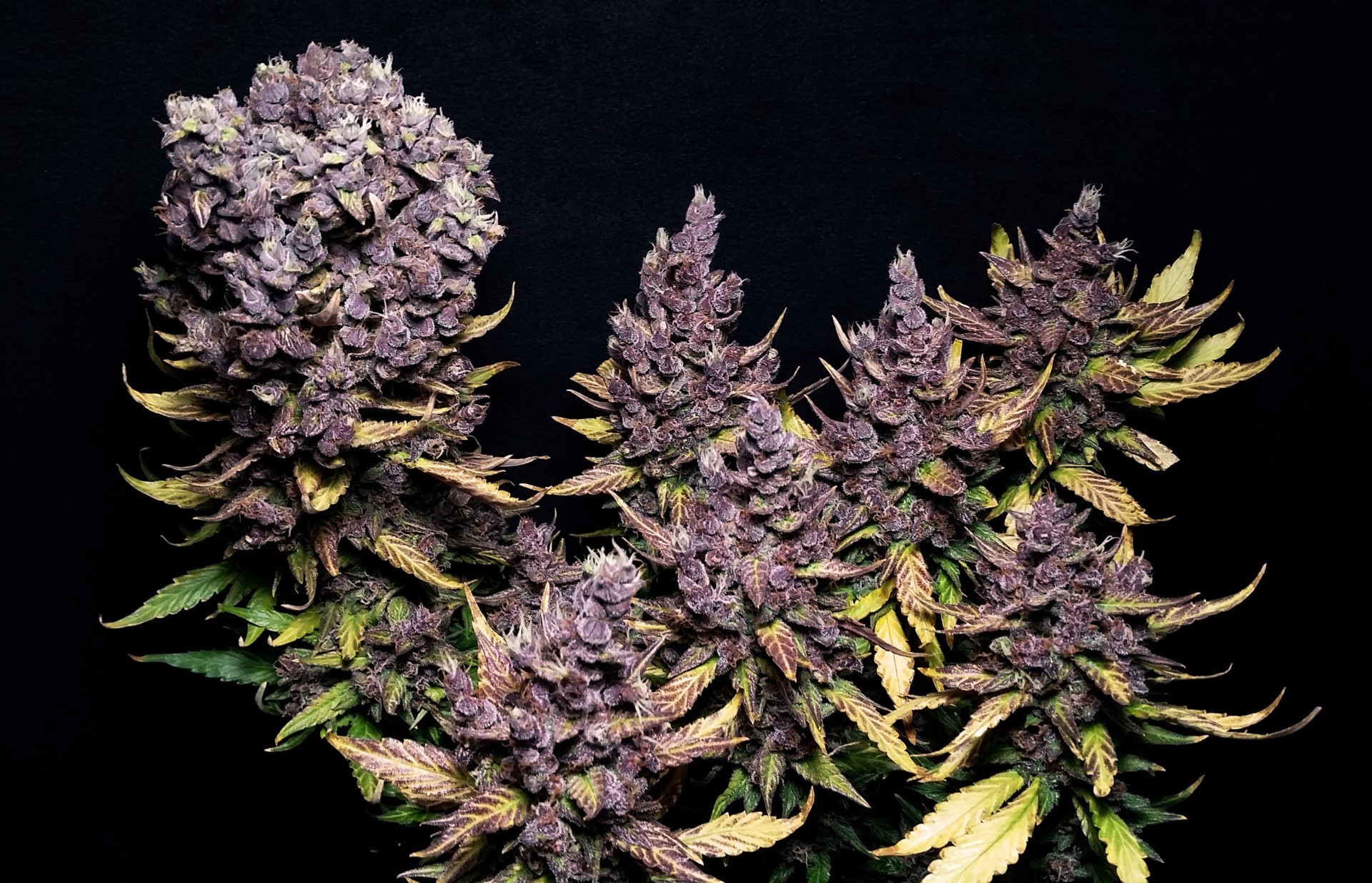 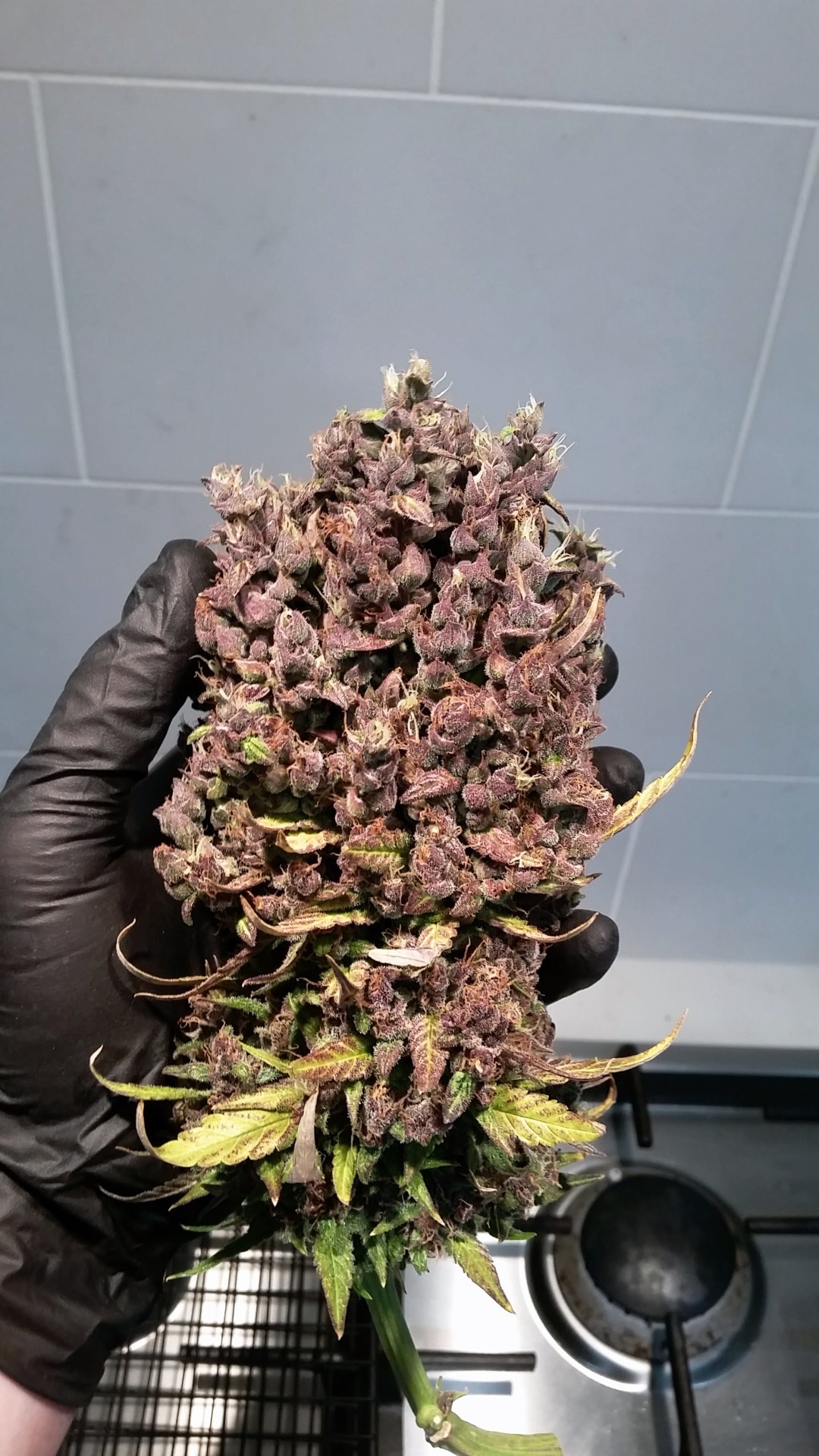 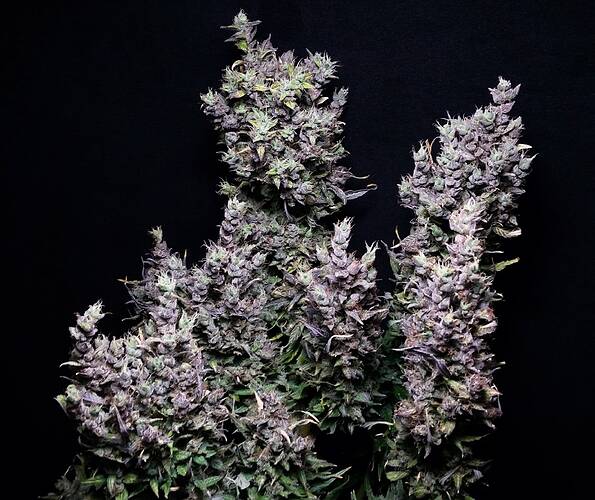 And to get this thread started.

Here we are on Day 1 of the new cycle.

The plants are as follows.

Have two Fastbuds - Blue Dream-matics which were received for a grow comparison thread being done here on OG put on by The Vault Seedbank heres the thread for that https://overgrow.com/t/the-vault-s-blue-dream-matic-auto-comparative-grow-in-association-with-fastbuds/10372

They are being run in solo cups this round instead of the bigger 750ml yogurt containers i was using before. Just so i can enter and have fun in Mad’s 16oz grow contest, and here’s the link for that MadScientist's 2nd Annual 16oz Cup Competition 🏁

But yeah Day 1 here we go again. The smaller containers i think may be a good thing, less plucking and training will be needed. 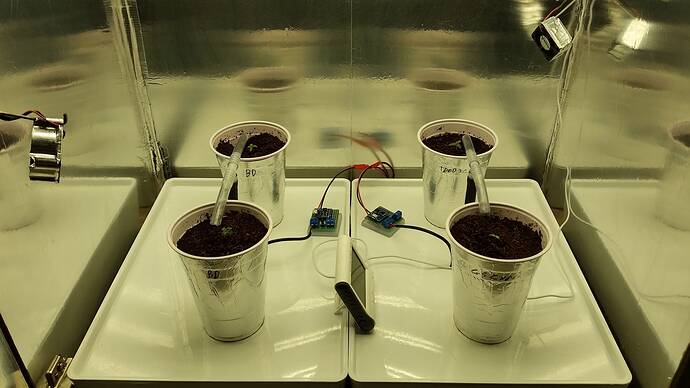 Looks like it is a garden in space! LOL

It is a garden in very little space

Yes, can’t wait to follow this one. Good luck and get a killer grow… AGAIN​:wink:

it’s like it started all over or something lol

Subscribed and ready for the ride!

which you totally missed lol

Yes i have considered shorter wider pots and even in setting them into the reservoirs, but i want everything contained in this cabinet as if didn’t the reservoirs would be remotely mounted already, but back to the pots being in the 16oz Solo contest i wanted to follow to the letter instead of fudging things.

I will say taller but narrower pots in my experience “just observation” actually do make a difference in plant growth up to a point though, as things like surface evaporation on a wider container will be greater and if not watered heavily to keep that top layer moist a lot of it will be too dry for roots and just go to waste. Also plants roots dive down then out, which i believe then sense when they hit a bottom and go “wait hold up we need to go wide now cause we can’t go down”. But really for my size were talking small amounts of difference. Also flopping a top is easy, if i have to do it once or twice in a cycle and nothing else im fine with that.

And to the rest welcome to round 2

Edit: Just realized this thread some how earned me a “First Grow Diary” badge

AWESOME! I loved reading your threads! I’m off grid so something like this is right up my alley

@Mr.Sparkle I edited the title, but all in good fun, you deserve an awesome thread title for the amazing job you do. Love every one of your threads and have been following your work for years now. (Icmag, and the occasional reddit post)

Keep calm and grow on!

Start of Day 3, light are still tuned down, don’t know what wattage were running, but will measure that once i bring out my meter. 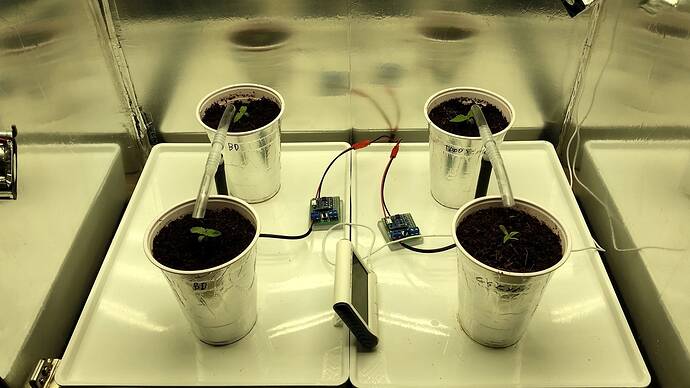 That first Pic of the cab is unreal. It looks like a space age warehouse, but then I scroll down and see the little solo cups lmao. Love it dude.

lol first ones were yogurt containers so 750ml or so but looking like i will get between 30-50g dried per plant off them, but running solos this round for the contest and i should have to do less adjusting, probably just flopping tops once.

The rest is in jars, swapped packs on the jars as the boveda’s going into the first plant’s jars were a bit dry going in and older ones that need to be tossed, but it made it all a bit drier than i wanted. So they got swapped with the wetter packs coming out of the jar of the 2nd plant as they are almost at where i like to cure them at so things will level out on both sides.

The ones in the picture though need a bit of air drying till i throw them back together which will be later tonight or tomorrow morning depending, as they were just sealed over the previous night and still need some moisture to be pulled out before they are at cure level. A “sweat” so to speak, really just an equalization of moisture through out all the buds. 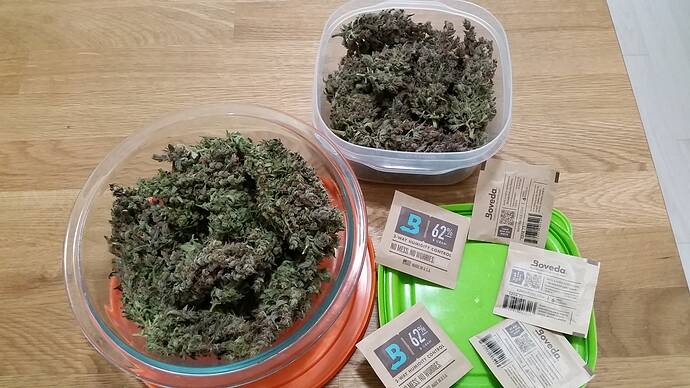 Drying they are at cure range now, still expect a couple grams to drop off through burping the containers to cycle air, but i will measure them again in a week just for transparency.

But yeah… In order of how the plants came down in the previous thread. 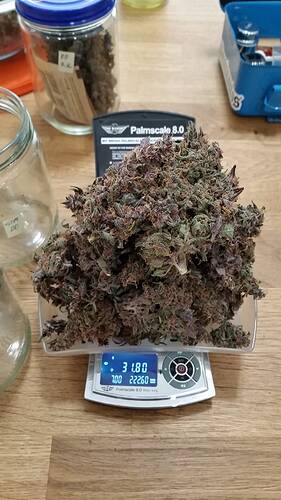 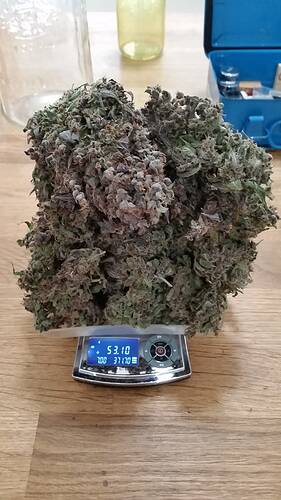 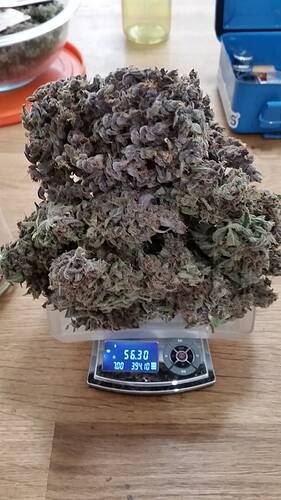 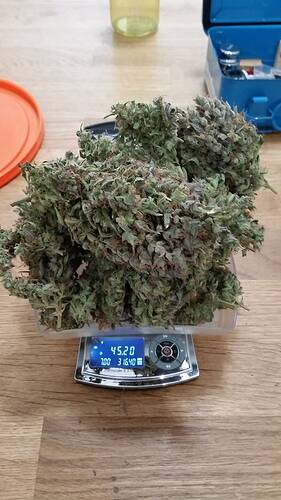 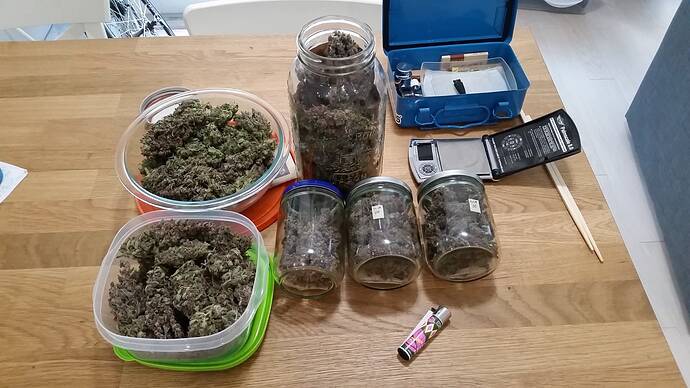 Currently looking at 186.4g from 99watts total draw and around 2-3w of fans during lights out.

Works out to be 119kwh so 1.56grams/kWh or with traditional measurements i can say i will end up with right around the 1.8grams/watt done in 66 days total of 18/6 light

Pretty ecstatic on that, best efficiency ever.

As for round two, shortened my tube a little and have been adding a bit more coco to fill up the cups, currently running megacrop at 500ppm and they are getting 3 waterings a day at 6secs then a 30sec rest then another 4 secs of watering. It’s keeping it pretty wet/moist currently but i’ll have to change that once we get mid flower or sooner, i’ll just increase the duration’s as the amount of water they uptake increases. 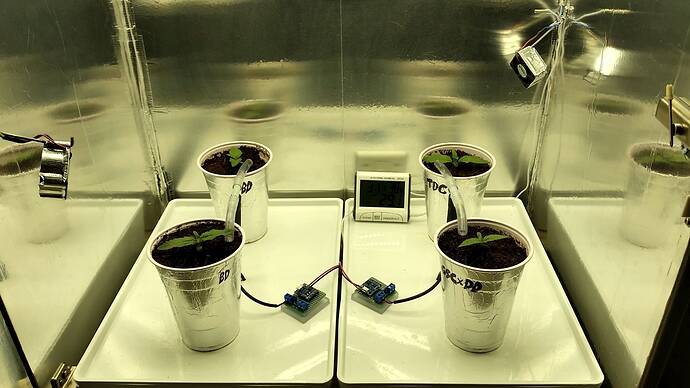 That is absolutely outstanding @Mr.Sparkle

I love the new revised title. It should be the title of your new book, due out 2020.

And I just got me a nice MrSparkle decal & the “devil’s inside” WASHOOOO!