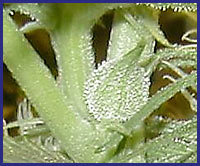 Hybridize your favorite plants without ruining your sinse crop-- marijuana seeds without the mess.

After your male has plenty of ripe flowers and is starting to drop pollen (one to two weeks, typically), it’s time for the intended seed mothers to go into 12/12. Hopefully they are clones from mature moms, and have plenty of female preflowers showing white hairs (pistils) at their nodes. The pollen-dropping male goes in there with them for a multi-day “Love-In.” During the few days that the male is in there, he should pollinate all of the preflowers. You can help make sure the pollen is well-distributed among the female plants by moving him around a bit and introducing him to the ladies. Having a fan on inside the grow area won’t hurt either.

Different strains have differing amounts of preflowers. Some will be so profuse that you will only need to treat one plant. With plants that preflower only lightly, it may be necessary to delay the introduction of the male until after one week of 12/12. I would NOT try this later than one week into 12/12 if you want something you can call “sinsemilla.”

Cleaning Up After the Party

The next step is to remove the male (make some Bhang!) and hose the grow down with a pump-sprayer. Also, make sure all your fans are turned off while doing this. No sense in risking any more pollen possibly getting blown about. Spraying the area down will give the plants a thorough foliar bath, soak the soil and moisten all the surfaces where the pollen might have landed. You need not go crazy while doing this and treat your grow area like it was on fire. A good thorough spraying will get rid of any un-wanted pollen. And a couple of repetitions of this wetting treatment for a few days afterwards, with its resulting high humidity levels, should certainly render all of the remaining pollen inviable. Stray pollen loose in the garden is a risk using this method, but not much of one if things are done right.

Here’s a pic of a girl subjected to this treatment

This plant has been in 12/12 for 17 days. You can see that the pistils on the preflowers have retracted inside the swollen calyxes, a sign they are forming seeds, while the new pistils are all white, un-pollinated, sinsemilla. With the seeds forming at the nodes, I can see them clearly so they’re easy to find, and I can harvest them before the buds finish, because they’ll be completely mature by the fifth week of flowering, a full two weeks before the buds are ready.

Seeds only need about four weeks to mature, but additional time on the plant will not harm them. Care should be taken during harvesting to assure that seeds aren’t lost due to dropping from the plants during handling or drying. Handling the plants gently is the best way to assure the seeds end up where you want them.

Eggs in the Nest 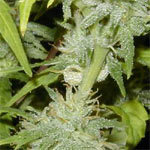 The Ladies have had two foliar treatments since I removed the male. They’ll receive another this week. All remaining pollen can safely be assumed to have been destroyed by the spray-downs, though I do expect to find a seed or two in the bud. In past trials, this method has produced on the order of a couple dozen seeds per plant, give or take a few.

Mature seed will be typically be dry and unlikely to rot, but care should be taken when storing the fresh-harvested seeds. adding a silica gel dessicant to the storage jar for a day or two will absorb any residual moisture without drying the seeds completely (do not leave the dessicant in there for more than a few days). The overall seed yield is low, but you can expect to harvest more than enough to share with a few friends and even set a few aside for a rainy day.

I believe most hobby growers like to make some extra seeds every once in a while. Perhaps you want to cross a couple of strains and make a hybrid, or maybe you just want to share some genetics with your fellow growers. But many times, small-scale, hobby growers don’t have the extra space to create a separate area for breeding. These growers might not even have a spare room or closet where they can stash males until the plants drop some pollen. And no one wants to risk leaving them in the same room as the ladies, lest some stray pollen gets loose and ruins the whole grow! Consequently, many home-growers don’t have the opportunity to produce seeds without great risk to their sinse crop.

However, for the desperately cramped seed-fancier, there is a compromise method that works well if you’re careful. That is placing a ready-to-drop-pollen male in the flowering box, at the BEGINNING of 12/12, alongside all the young female plants. The idea is to pollinate the females while they have only their preflowers, then destroy the remaining pollen. By pollinating only the preflowers, before the real “nugs” form, you will harvest enough seed for
personal use while keeping the main crop seedless. 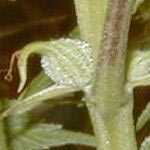 Keeping your male donors alive
Timing is the key to this procedure. Ideally, the male plant should be ready to dehisce (release pollen from flowers) as soon as the females are put into 12/12. This means the selected male clone should get a head start of anywhere from one to three weeks on the females. This can be achieved by creating a separate 12/12 box. And since it’s for a single plant, you can throw something together with a cardboard box, an incandescent light and a timer. Perfect conditions are not necessary.

Top: Your male dorm can be as simple as this box made from cardboard with an incandescent lamp. The light is on a timer set for 12/12 to ensure good pollen drop.

Bottom: The male in the box, and (bottom) the pollen-tray for catching any extras.

Written by 180. He hopes you’re well aware that he is a cosmonaut.

(I claim no credit for the content of the article. Shamelessly ripped from the OG OverGrow in 2012.)

I have done this before its great for a few seeds and you know exactly where to find them come harvest time.
@FredFlinstoner this is like that Big Kush plant a while back.

I’m still trying to hunt down an article I remember reading that calls for using a bag with pollen in it to pollinate a single branch. @V4vendetta is in the process of pollinating his entire grow. Not to say I disagree with what he’s doing since I’m sure he knows exactly what he is up to, but all of that seed just seems painful for any need I’ll ever have…

I have to come back and read this… looking for something else atm. lol.

I had a plant pollinate his sisters that way. I’ll stop back in. I never thought of it before, but these plants were so fertile with huge pre flowers and I had huge seeds in their place a month later!

Cool to see it mentioned. Thanks! I’ll be back to read the first part.

Thanks @Schmokey! I wish I’d have thought ahead and copied down some of the old threads. I’m glad that so much information has been saved, but so much more was lost. OG 1.0 was truly a special place.

You’re quite welcome Chronic. I had a sneaky suspicion the RCMP weren’t far off when I started ripping stuff. Unfortunately, I didn’t get near as much as I’d liked to have. There is quite a bit of the old stuff here already, I’m just doing my bit to fill in holes where I can. Some of that stuff is like literary gold and deserves it’s place where all can share in the wisdom!

The original contributors deserve all of the thanks and credit for this work, not me.

I put OT1’s Hash Press up tonight and SCW’s skuff tumbler as well.

I remember that skuff tumbler. Pretty ingeniously made I must say.

Aye, that it was laddie. There was a hell of a lot of ingenious DIY stuff that got lost when OG went down.

As much as I’d like to have them in their own topic to give credit where I feel it’s due (Ot1, SCW), I ended up adding them existing related topics.

SCW’s skuff tumbler (you’ll find the link for Ot1’s hash press at the bottom of the post.)

Yeah, that’s my experience and I’ll have to find my pics. It was eye opening for me and the first thing that came to my mind was that you could get seeds without the energy busting regular way. The pre-flowers on my plants were super fertile. The seeds started forming immediately and they were all beautifully mature. The seeds were also finished about halfway though flowering. That’s when it really hit me.

I’ve been saving pollen a little and it’s perfect to do a nice neat dusting of just the pre-flowers and let the grow proceed. I want to try this on other plants now.

I’ve told the story before but it’s actually how I found the second version of Ovegrow was even around. I made the FAQ with my Kief box design back in the day, anyhow, I was telling a friend about it and I checked google for it and low and behold there was Og v2.0.

I wish I had saved some of the old OG as well, after the crash I was so skittish I saved the teks I wanted to remember from shroomery. It still appears to be around.

You’ doing God’s work @Schmokey, keep it up!

I’m merely following in the footsteps of other who have gone before me. There’s a surprising amount of the old stuff kicking around here. In fact, I’m almost feeling inadequate in that so much of what I saved is already here.

Looking for any of the shroom stuff @riahgorl_1 ? Got a good bit of that too! Not sure what all I have of that aspect of getting mellow, as I haven’t dug into it yet. If there is anything you need that you think I may have (screenshot of my shroom sub-directory below), feel free to ask.

Naw man I’ve got all I need for the shroom side of things. That’s a helluva good collection too. Man you were on it.

Like most people, I run a lot faster scared than mad. Had a feeling OG was gonna go down so I started ripping.

I took a quick look, and being honest, it seems lot of my myco stuff isn’t from OG. I’m a pack-rat when it comes to information and I’ll post up anything I have if someone wants it.

Sharing is why we’re all here.

Scary until you gather your first lot of seeds, then it is an addiction like smoking ice… You HAVE to do it again and again.

Hybridize your favorite plants without ruining your sinse crop-- marijuana seeds without the mess.

Bump! I’ve been thinking about this and the subject has come up and I’ve asked and learned a bit. But here it is! Only difference is, I’m thinking about pollinating during veg…

Interesting to see if the seeds develop during veg like under normal flowering conditions.