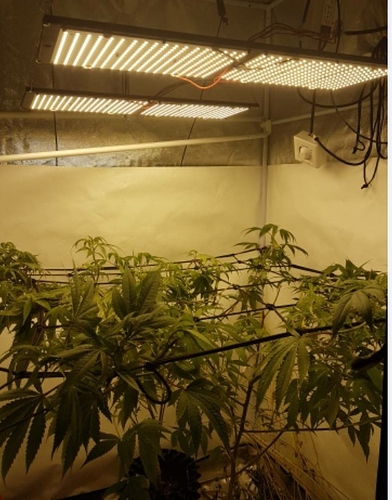 The Chinese knockoffs lol. Lots of people here rave about solstrips, they work out slightly cheaper if you get them to their full 48w.

There’s a site called Alibaba and they sell a bunch of Samsung diodes in strips ,boards, singles, ect.

You can get lost in that site

Can you link me to a building thread, where I can find the appropriate supplies and sources. Or a list of needed supplies. Really interested in getting an indoor grow going on. I would also need a list of tools needed. I’m very new to this type of technology, so a detailed guide would be awesome.

The strips come like QBs except they recommend parallel wiring where QBs have you wire in series.

I assume that QB above is yours and you don’t need a parts list for the QBs, or do you?

Little confused by what you need that’s all

The strips are pretty easy. You can get them with heat sinks already drilled and tapped. To build a rack system you would need a hacksaw, a hand drill, a screwdriver, and some wire strippers. You would also need to buy some screws, aluminum angle iron, and eye bolts to hang it. Then you would need the driver, wire, and wagon connectors to wire it up.

The picture is from alibaba. I want to build a 10k setup eventually. I’m just unsure and don’t want to waste money on something I can’t build. It’s difficult for me to learn new skills. Are there any YouTube guides out there that would help me learn?

you should look into solstrips on this board. ive never done anything regarding light building or even electrical and i just got my strips/driver in the mail yesterday.

the help you can find on here is pretty crazy.

These are a little old, but the basics are still the same. This is a good place to start.

There’s a few YouTube videos on quantum board builds and it’s the same basics only difference is whether you wire in series or parallel. There’s actually a really really long thread on GC called hlg 120 quantum boards in stock an TboneShuffle breaks down everything you need to know about the build . Its like 70 pages long though so be prepared lol

Horticulture lighting group the place that sells the QBs has tutorials.

It’s pretty easy. The AC side of the driver you will want to tin the stranded wire.

You want a ip67 water proof connector for the AC side of the driver to a plug. 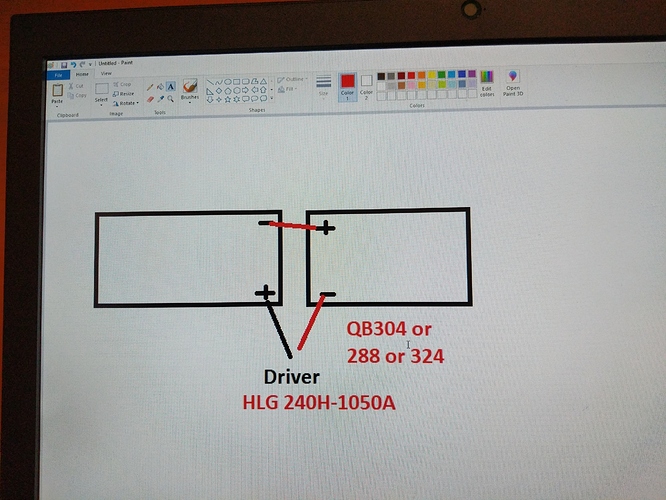 I use a 1050ma driver. Feel free to drive them however hard you want. More efficiency the lower though. The A at the end means the ballast is dimmable with a screw. B is for wiring up a potentiometer.

Materials:
I buy the plug kits since I only made a 520w fixture, but if piecing together a bunch it makes sense to part it out. This comes with the plug, the waterproof connector, 18ga wire, wagos

Boards with heat sink. The heatsinks come tapped to allow board mounting.

Aluminum L shapes. This is what you tap so it makes a tight frame. 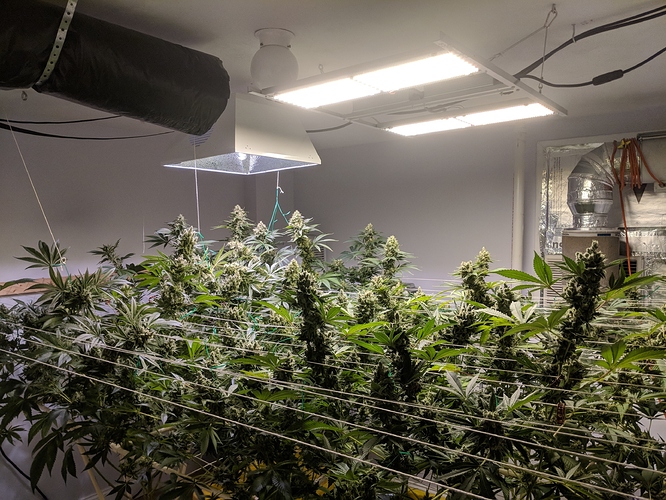 This is my setup. Sorry for the earlier reply. I thought the picture was yours

QBs and strips can both be wired in series or parallel. I like to wire them in parallel with a constant voltage driver. That way you can assure to get the max wattage out of your boards.

It’s very hard to find a constant current driver that is the same amperage as the boards.

I’m not concerned with thermal runaway with these boards. The reason being is that they can take 4 times their rated wattage without burning up. LED Gardner did a torture test on a qb288. They are rated at 135 Watts. He was putting over 600 watts into that thing and it was fine. When he got up near 700 it burned out but didn’t catch on fire. It just stopped working.

I suspect that the QB132s can take even more than four times their wattage because their PCB is thicker, bigger, and stronger than the QB288’s.

I’m pretty sure growmau5 used to be a member at OG back in the day. He has lots of good info on this subject on his YT channel.

(4)QB132 are 99-125 bux, a HLG240C1750 is 63 bux. Both include free shipping if the boards are bought off Ammozony. They’re hit and miss over there but I think you can get right from horticulture lighting groups page directly with a shipping cost added. Mine(qb132) came from Ammozony originally, I got them as new unopened box from a guy down the road. He was going to be unable to use them for the next 2 to 5 years and was hurtin’ for cash. He either kept the driver or hadn’t gotten one yet I guess.

Side thought… This asshole gets his third DWI, Hits a pedestrian veers into a few cars and crashes into a storefront for a finale, does tens of thousands of dollars damage to multiple people properties. Gets 2-5, less then 18 month’s he’s out on gain time. I got 366 days for 4 plants and sat for 336 of them. Was told no gain time for drug charges, why isn’t a DWI also drug charge??? In the end, by my request I did get 30 days gain for teaching a inmate reading class. They surely didn’t offer, I was asked to do it out of the goodness of my heart at first and it had to be approved and signed by the judge beforehand. Fucked up shit right there, fucked up.

I believe the next best deal would be the QB92 elites. Two can be run on a HLG-320H-54A driver ($85). Or you can power one board with the HLG-150H-54A. That may be preferable because then each individual board is mobile. Those boards come with the heat sinks for $99. So, with the driver and wiring, you are looking at $200, and two of those boards can cover 10 square feet. Three of them can cover a 4x4.

All in all, I prefer the QB132s or the QB120s because the coverage is better. You don’t have a small point source of light, instead you spread the source over the whole growing area. Plus, the fact that they don’t require heat sinks makes it so much easier. And they are cheaper as well.

If you really want to get efficient, you can buy twice the number of boards, and power them on the same driver. This way, you will pay a little more up front but save a lot in the long run on power. For instance, instead of buying four QB132s, buy eight and run all eight of them with the LRS-350-36 or the HLG-320H-36A. They will run at half power and have EXTREMELY great coverage and run very cool.

You will save immensely on the power bill, and instead of lasting ten years, the boards will last 20 years. You will also save on ventilation power because of how cool they would run. For a four board setup that will flower a 2x4 area, it is only an extra $100 for the four additional boards up front. That’s a small price to pay for the power savings and efficiency.

I am in the process of doing this with my 19 sqft closet. I am putting in a 4ft pvc stand to make it a two layer grow. Since I will be running twice the number of boards at half the power, the boards on the bottom level won’t heat up the plants above them too much. So, I’m essentially turning my 19 sqft closet into 38 sqft. Two 4ft layers are perfect for me because I grow 2-liter bottle SOGs straight from clone to flower. My tallest plants aren’t any more than 30 inches tall. Also, just now I was searching for possible drivers and I came across this. These are excellent drivers, but the guy is selling them for so cheap, it seems too good to be true. But if you want to take the risk, after all it is eBay and PayPal so you would be protected. He has five of them left so you could just buy one for each QB96 elite v2.

Another good driver option for the QB96 elite would be the HLG-185H-54A. You could get them toward their full 200 Watts, although it’s a little more expensive than the HLG-150H-54A.