I’ve been making bubble for a while. I’m happy with the product it yields. I consider melty bubble to be my favorite form of cannabis. But, always room to improve.

I had an idea to add salt to the icewater, which allows the water temperature to dip below freezing, like ice cream makers. Salt has no flavor and can’t burn in the product, and you just could just give the bubble a quick rinse with unsalted water after you drain the bags.

Has anyone tried this? I’m going to try it next harvest. I think it could bump the yields up, or at the very least make the heads more brittle so you don’t have to go past a few pulls.

Ive never tried it but always wondered how and if it would work without affecting quality. Cant wait to see how it turns out.

considering how volatile the compounds in the gland heads are, chemical changes at molecular levels with NaCL and cannabinoids are likely so taste might be affected

even if you rinse the hash off the chemical reaction with the salt has already gone down while you were agitating.

You dont need it below freezing. 4c is perfect for ice washing.

Are you saying you tried it?

Table salt isn’t really reactive like that, I doubt that would be an issue. Salt and oils don’t really interact.

Fast an easy for a farmers grade sift. Youll need to do a lot of cleaning to get to any hash worth smoking with dry ice

I propose an experiment…

I exclusively run dry ice. I use 160 or 120 mostly. However, I don’t smoke it directly. I use it for edibles and rosin. Rosin gets pressed through a 37-45um bag and it’s cleaner than it needs to be for edibles. Both of these benefit from the high yields of dry ice.

Cleanest dry ice comes from taking cuts and watching for color change. You notice a green tint creeping up as you shake longer. More plant material is crushed to finer particle sizes the longer you go.

I don’t dab anymore, I like hash melty but still handle-able.

I think dry ice usually carries the trichome stem with it, which makes it not as goods as water. But I’ve also read you can clean dry ice hash by running it through bags using a water method. I’ve been interested in trying this, because you could easily clean it all in one short water cycle.

I certainly wouldn’t hesitate to top off a bowl with it, but if you’re trying to make temple balls or something, it won’t stick together usually.

I propose an experiment…

I’ve yet to do ANY of these ideas but the salty dog one is new to me.

shit forgot i was in the middle of washing hash!

The 25 microns is full melt

thinking more about all the things in the heads, theres terpines phenols cannabinoids lipids and other stuff that could potentially react with the salt.

I’ll definitely let you guys know when I spin the next batch up. It might affect things, definitely a possibility. I’d hate to ruin a batch of bubble but experiments cost money and my hypothesis is that it can only improve it.

It worked. Yields seem slightly up vs regular. Some thoughts, though:

I used completely different plants than last round. More trim, less bud, so it isn’t quite “scientific” since there’s no control. I used 1.25 gallons of material, last round I used 1.75.

I also used maybe a cup of salt in the water, don’t have a salinity gauge anymore, but it tasted about half as salty as seawater. Next time, I’ll double it.

So it does seem like I did a little better, I can’t say for sure since again, different starting material, less of it, etc. I noticed the first pull in particular was excellent, subsequent pulls dropped off more significantly. It may just be that the colder temperatures allows more in the first pull, some guys do 5-6 pulls so this may help with total labor involved.

So, in summation, no not very scientific, but there is some anecdotal evidence supporting my theory.

Dry ice sinks and is cold as fuck…throw some dry ice pellets in your bags. It would also help with agitation as it bubbles away. 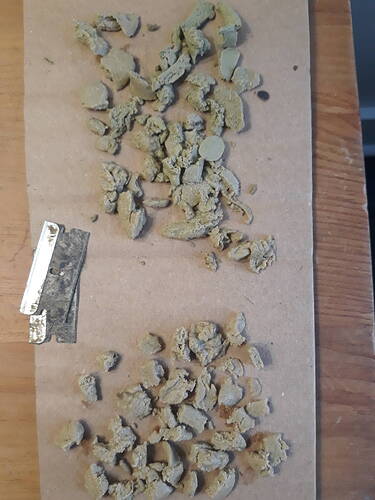 The bottom lighter pile, 1/2 the entire volume, was the first pull of the 73 alone.

Usually it is more spread out, but in this case, there’d be no reason to go past 3 pulls. Sometimes I do as many as 5. Again, 1/2 the entire hash volume came from just the 73 first pull. At the very least, it saves a big chunk of labor in hashmaking, I bet if I tripled the salt I could do better, get almost everything in 1 pull, just do one second one to get the remains.

After a dry and weigh, I got 17.5g of high grade bubble. I don’t microplane, just press into a patty.

This technique does show promise.

For full scientific purposes, I’d need to do 2 separate runs, one with and without, using same material, same stirring, etc. However, I can show there may be something to this.