What is your take on Seedsman? One of the biggest sellers with large selection, worldwide shipping. Has also started his line of cheap “knock-off” strains. Any positive/negative experience with them?

Link above contains affiliate tracking code. Please use this link to buy at this shop and support Overgrow.com. Thank you.

I’ve been using Seedsman for the last 3 years or so after Herbies had their semi shutdown (iirc). For their branded seeds, ive grown Blueberry fem, CBD critical mass, Afghani ice, and currently Jack Herer and Galat OG - Some DSLR shots

Had decent success with their freebies, the afghani regular they also (or used to) send i’ve never really dabbled with as I prefer buying fem. Orders always arrived in good packaging, reasonable prices, descriptions/pictures fairly accurate, and like you said, a ton of selection.

I live in the UK so shipping from them is much easier im assuming than worldwide shipping. My go-to seedbank.

I’ve ordered threw them twice with no issues and fast shipping.

I’ve done a few grows for them elsewhere. Their gelato Og took extra 30 days. They ran a comp and the way it ran was a bit off. The actual owner is ok the reps need a bit of training . I had to contact the owner to get prizes from a comp as the rep was being awkward . They sell others seeds for a good price. Their own lines I see a bit of a poor germination sometimes. I doubt they make their own seeds tbh.

I just got my seeds from seedsman…blueberry and jack herer. Beans all popped in about 12 hrs which I personally have never had happen. Took about 10 days to get my order which I totally understand as I live in the states

Ordered from you them a few times. No issues, decent arrival time, and decent stealth packaging. Huge selection.

Have been good with all my orders. Stealth and original packaging, usually throw in a few freebies.

Am I remembering correctly, did they used to be a sponsor on the original OG site?

I personally don’t trust them, though quite a few people have had success with them.

This is a major security nono. I should be forced to do a reset because they shouldn’t actually store my password.

Sites should only store the encrypted version of your password, and that is a standard practice over a decade old. If the site gets compromised, then password and email combinations will be readily available and can be tried on sites like banks and paypal and etc.

If they take security shortcuts with passwords, who know where else they are skimping on security.

I cleared all my info out and looked for other seed banks.

Good to know, I think it was last year I tried it

A couple of years ago, I used them for three LARGE Orders (+$300). The third one, +$500, got popped by U.S. Customs. I notified them, referenced the Certificate of Confiscation word for word. They RESHIPPED ALL a wee bit more stealthily. ALL arrived safe n sound. I placed one more order before finding seed outlets Stateside. Had a commendable experience myself.

I’m still waiting on separate orders from Seedsman. I’ve been patient due to the 4/20 sale and covid. On vacation this week and hope they have arrived when I get home. I ordered on 4/28. Getting a little worried but I’m not blowing them up or putting them down. If you read there reviews on trust pilot a lot of people are bashing the slow delivery times. I’ll update soon.

I just messaged them about my order last night and the owner (Tom) actually got back to me already. 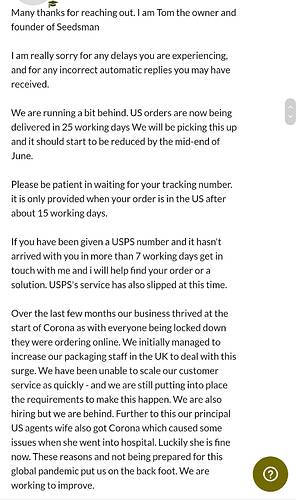 I have ordered from them the last year or so - some orders have to be resent - customs issue on my end as I live in a backwards country
I ordered a range of things over the last 3 months …nothing has arrived so I got in touch with them about it , I told them I was happy to wait until the pressure of 4/20 and the pandemic died off a bit . I have had issues with the international delivery times on a few items ( not just seeds ) because of this crisis
Jessica dealt with my concerns really well and the resend is happening now , some things I had ordered aren’t available now , so I made new choices for the same value …really professional customer support and good selections …IMHO there are some gems amongst the fad strains
Have grown their Gelato x OG and really enjoyed the smoke after a short cure ,was easy to grow … I am curious to try it after 4 month cure now I am home again
The last order during 4/20 had me ending up with more freebies than seeds paid for in fact

As you can see I have an addiction

One order or multiple, lol?

Seedsman , their girlscoutcrack is very good , it’s on the same level as $150 seeds I’ve purchased . 10 seeds 8 popped , very strong in veg sucks water like no other , no smell untill half way into flower . Roots can get week tords end of flowering, it’s a hard plant to reveg for me anyway. Three phenos stuck out , cinnamon/molasses , skittles muffin , mountain dew pancakes. The skittles muffin smelled and tasted exactly like skittles candy with muffins on the palate which caused major hunger very strong terpenes . Stoney , blastoff, laughing fits , satisfied about sums up the three keeper phenos , the mountain dew pancakes pheno is a rocket ship ride straight up for 30 minutes then it turns and heads back to earth laughing the whole way down into complete stoneyness . I would look at the jar for 15 minutes and think do I really want to do this . The skittles muffin a terpene bomb was also speedy , stoney , satisfying, the house would smell like s skittles factory after smoking , cinnamon molasses was a stoney relaxing pheno. This strain cures fast. All good , two plants were weak , maybe my fault.Strawberry banana grape , smells like sugar cereal, frootloops or fruity pebbles with a touch of diesel. This plant has so much resin it was in my jars for months and I still can not use it in a grinder, maybe extracts I didnt like it because of the resin never dried it was like glue ,the terpenes had a mix of menthol or mothballs mixed with fruity pebbles cereal after four months I sold it. Big nugs fast is junk why seedsman why . I just wanted to let people know girlscoutcrack may be a knockoff of west coast strains but it’s cheap clones flower in 7 to 7.5 weeks 8 to 9 from seed , be carefull going past 8.5 ,9 weeks this plant really loses its blast off power, some strains are trash if harvested early, not so much with this strain. Grow out 10 plants you will find one I promise

I’ve only ordered from them once. The order did take a full month to get to me but I just cracked two yesterday for my next run. 2 for 2 germination. I’ll be posting updates once they start getting goin