Those that have used led light , will a sf2000 be enough light to keep a bunch of mom and some from seed smaller plant . Theyre all going in a 6x6 area full size cellings. This for a perpetual grow.
I have to buy a new light for my veg room . I don’t want 2 1000w hids going at once if I don’t have to . I also font want a weak light with stretched out plant’s. I have no problem flipping a 1000w mh for week or two after I take clones before flower.
How’s the quality of the lights ? How is the light compared to a 1000w mh ?

Ive never used a 1000 watt MH but the 3 different types of LED lamps I have, have worked well for me. The sf2000 looks decent though I haven’t used that particular light but I do have 2 Bridgelux strip LEDs I built thanks to the good folk and their knowledge on this site. They each run off a 150 watt Meanwell xlg driver and power 10 of the 2 foot strips. I have flowered and vegged with these two lamps and they’ve been great! My only qualm is the size and power, I would like it bigger! But thats the beauty of these modular builds, I can always change it around if I want. I have plans to get 4 more strips and take the 20 I already have and combine them with a 480 watt hlg Meanwell driver and run them to flower my 4 x 4 tent. Got that info from a link to LED Gardener from the good peeps on this site! Love OGers! Anyways, if you got the money and need an efficient light that runs WAY cooler, then that sf2000 is fine and if it lasts you many runs then its worth it…man, I got a 600 watt HPS in my 4 x 4 now and its hot! Even air cooled and with another 8inch AC Infinity exhaust system in it and its still warm! Sorry for my rambling, TO ANSWER YOUR ORIGINAL QUESTION I think you’d need at at least 2 of those sf2000’s for a 6 x 6 foot area, but maybe Im reading it wrong…

Thank you for your reply I’m looking for for some one who used 1000w his lighting and switched. I know the led lighting works , its more so how well compared to.
I’m not worried about heat . That’s not a problem and heat is wanted 10 months out the year and is easily controlled the other 2.
My number one priority is quality and quantity of light. 2nd amps / watts used .not because my bill I don’t want to burn my house down.
Its said the sf1000 is compatible to a 1000 hid.
I’m trying to find some one who has used both.
Would 2 600watt HP’s be better or worse than a sf2000 600 watt hids is close to a 1000w hid.

Got a link to the light you’re talking about? It should give all the info as far as actual wattage and spectrum etc

Hey bud, that light is only recommended for veg in a 3x4 tent. I think that’s too far under spec even for keeping moms.

Spider farmer generally has good rep and uses quality diodes and drivers, but they are going to be really pricey compared to HID lighting.

The SF4000 specs say it can veg a 6x6 and pulls only 450 watts from the wall, so it would be a savings in energy compared to a 1000w HID, but the upfront cost will be significantly higher.

It will also run a lot cooler than 1000w HPS which might actually be a problem.

Hey bud, that light is only recommended for veg in a 3x4 tent. I think that’s too far under spec even for keeping moms.

Spider farmer generally has good rep and uses quality diodes and drivers, but they are going to be really pricey compared to HID lighting.

The SF4000 specs say it can veg a 6x6 and pulls only 450 watts from the wall, so it would be a savings in energy compared to a 1000w HID, but the upfront cost will be significantly higher.

It will also run a lot cooler than 1000w HPS which might actually be a problem.

I need the heat . Its cold here my basement is connected my garage and its even colder fall spring winter. Put it this way my Basement is finished and in dead middle of july it never goes above 70f in my finished basement. Heats wanted.
Will the sf4000 put out the same growth as a 1000w hid? Im needing to take allot of cuts every week from x amount of moms. Its supposed to be comparable to 4000 watts but a 2000 watt model wont work in a room that could use a 600/1000 watt hid.

If what this guy says is true, I need more light allot . im just going to stick with a 1000w hid for now . The lights wont push out enough cuts atm for me .

Lack of heat from LED can be an issue no doubt. I tried putting my tents in my basement and it didn’t work well (I use all LED). I had to vent some of the exhaust back into the tent to keep temps up and even then they were a little low. Eventually I made room and moved them upstairs.

I can’t 100% confirm if that light would replace 1000w HID in every conceivable way, but LEDs have been used for veg successfully for a long time, and spider farmer is using state of the art LEDs. I build my own LEDs but I wouldn’t hesitate to buy a spider farmer light if I had to buy one.

However if I had to buy a light for large space like a 6x6 veg tent, I’d probably buy Chinese, specifically I’d buy a Meijiu quantum board, probably 480 watt model. They use same diodes and drivers as spider farmer but way cheaper. In a 6x6 space that price adds up.

Honestly though man if you need the heat, you might be shooting yourself in the foot switching to LED. The main reason to switch to them is they take less wattage to output the same amount of light. Less watts = less heat.

I cant move my stuff upstairs . I have a teenage daughter who is in highschool I dont want knowing .
Im sure watt for watt led will out preform a HID . I dont think there doing as good as claimed. Then it comes down to what makes more sense paying the electric bill and adding the proper wiring to accommodated another hid or taking a chance on a led unit thats very pricey.
I think I will do more testing on a cheaper unit. Its unfortunate there isnt any uniformity in the led world as far as watts / lumens . Unit sizing ect. 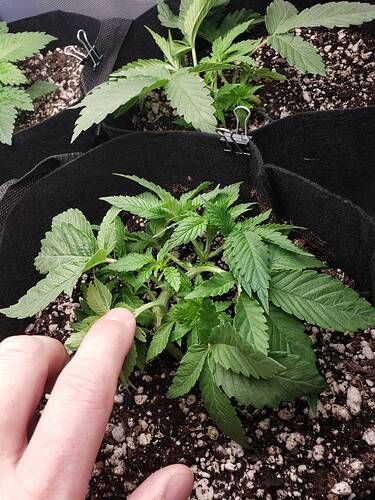 Take a look at quantum boards.

Take a look at quantum boards.

I will .
I dont think its understood how much I expect , need per week. I Understand they work. I understand there great for some people who have simple smaller grows .
I know people all love their lights that they bought and there is a certain amount of emotion you will express because your financially invested in your light .
I expect X amount of clones , X amount of growth per week. The clones and moms will be used for a vertical aeroponic system.
This will be far from personal use…
Im asking those of you that have used a 1000w HID and switched to led.