Thanks. The best looking critical hog (calling #1) 3rd-6th nodes had 4 per instead of the usual 2 on seeds. Don’t see that too often. The internodal growth in those are about 0.5inch too so I’m definitely cutting a clone off that one.

I topped off the system and upped the nutrients to 1.3EC. Fell from 1.2EC to 0.8EC in a week so I think an increase was needed. Still need to add Epsom salt so that will end up around 1.4EC. Started feeding the autos 0.6EC that’s 0.2EC tap + 0.4EC nutrients. 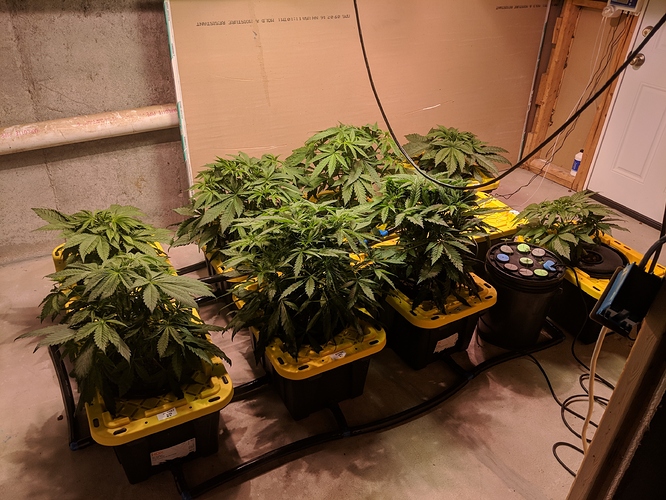 Wicked not a fan of how these plants look. I think it has too much N and not enough Mg looking at the leaves. There is interveinal chlorosis with dark green patches. The tips are curled down indicating too high of N, but not claw like. Feed is dropping went from 1.3 to 1.2EC from a 5.4 to 5.8 swing. Just seem like finicky plants. And the leaves are way too big for my liking. I don’t anticipate keeping any clones, I’ll take them just in case I’m surprised. I’m sure if other growth characteristics were good I’d look into fine tuning my recipe for these stubborn bitches, but as it stands aside from the tight internodal spacing on one of the critical hogs I’m not feeling this is a keeper strain. Have way too many seeds to waste time on these.

The chocolate chunk seem wicked light sensitive. If the light isn’t 24"+ away the edges start cupping. Humidity is 50-60% so I don’t suspect it’s that and when I moved the lights up it stopped happening, but as they grow taller it starts again as evident of the one to the back left.

Roots on the autos are deteriorating. I think I should have cleaned the cloner from the last time I used it. Was months ago so figured any nasties would have been dead. only thing I can think of. Never had this happen before.

Going to move them over to netpots in my multi site dwc totes and see if they can regrow. But this for sure set me back. Not sure how many weeks of vegetative growth I’ll get outta these, but I figure in a few weeks if the vigor is there they should be ready. 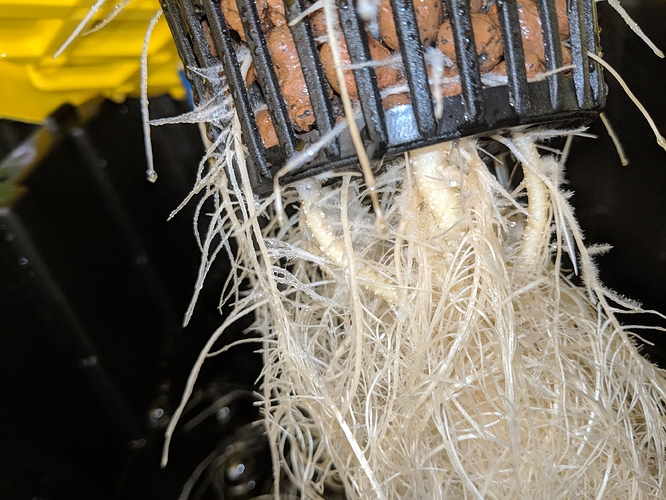 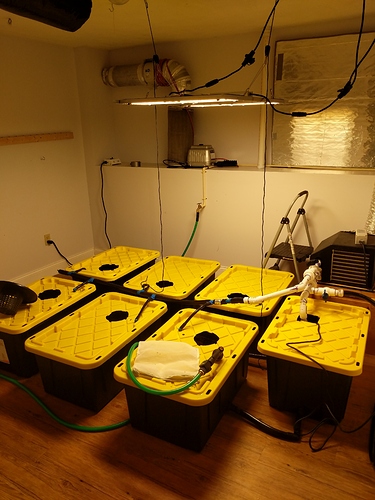 This is their new home for the next 10 weeks

What is it about the roots that you dont like? I cant see much of any problem from that pic, but the color may be off. Are they browning or shrinking or?

The autos roots are either getting blasted by the aero or they are rotting cause when I pHed them a couple days ago I had lost some root mass.

The rdwc roots looks fine. A little yellow, but not bad 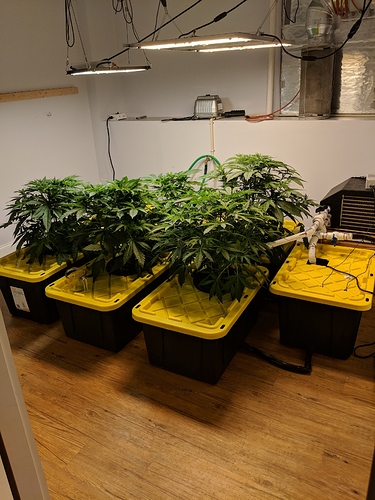 They have gotten so big in the past 5 days

Finally did the screens last night, but I waited so long they outgrew the 16" screens and I had to pop on some 24" pieces of pipe.

What I like about my system. Just pull off a piece of pipe and plop in a new one and good to go. Totally adjustable.

Also did some defoliation. Broke the two tops off on one of them trying to pull off the fan leaves whose petioles were the size of the stem. 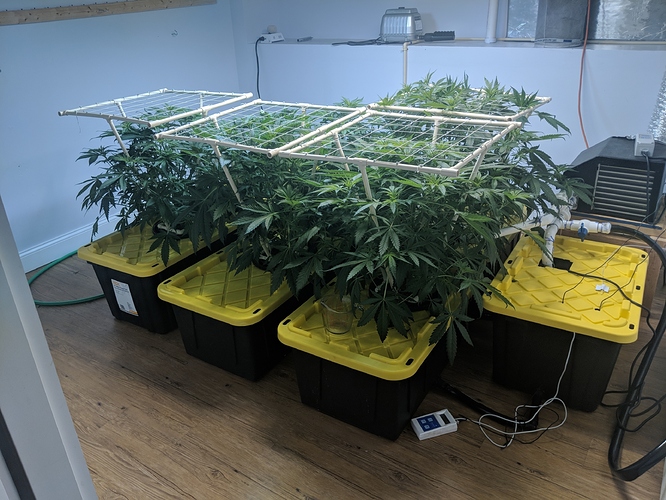 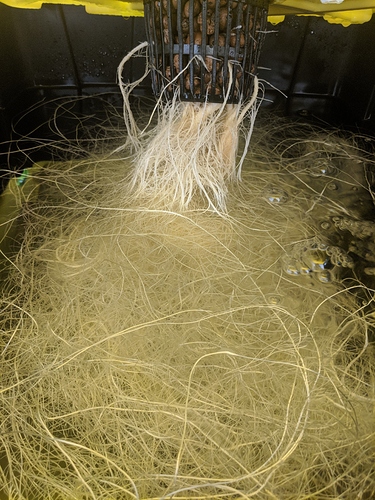 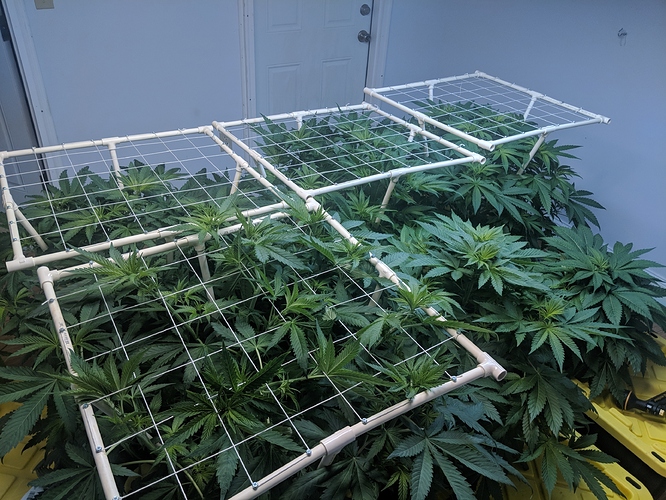 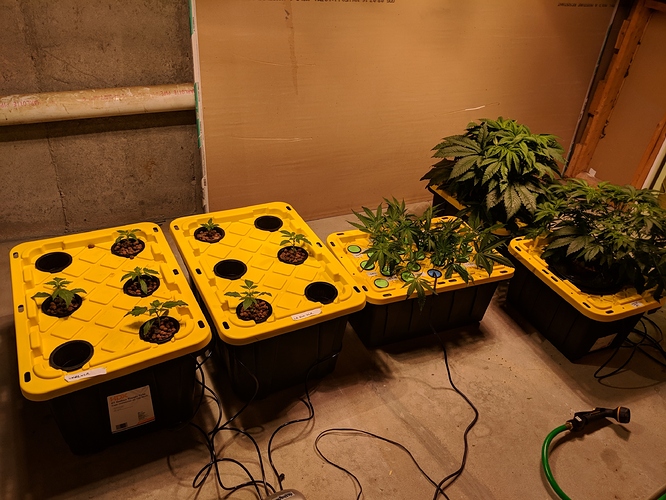 Cut clones just now and trimmed the lower branching. The autos are lagging bad. I think they will end up with 5grams each lol. Unless they surge ahead once put into the DWC like my critical hogs did 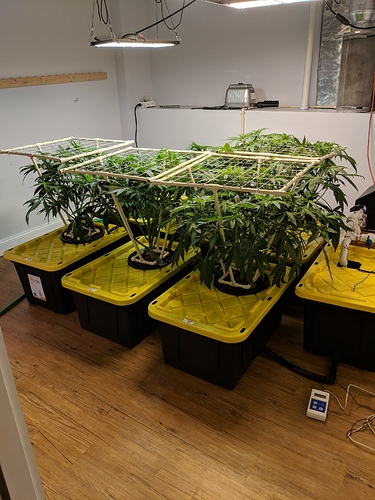 Not sure what I’mma do with the 3 chocolate chunk. They are a lot shorter than the others. Two are still in veg and the one in the flower room isn’t stretching as much as I’d hoped, yes there is a 6th plant back there lol. I think I’mma just put it back in the 12 gal tote and put it on top of the tote and find some milk crates for the other two still in veg. I guess this is the importance of running same strain in a rdwc. I figured both 100% indica how different could they grow. 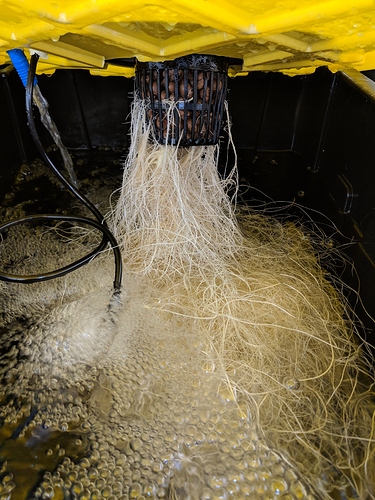 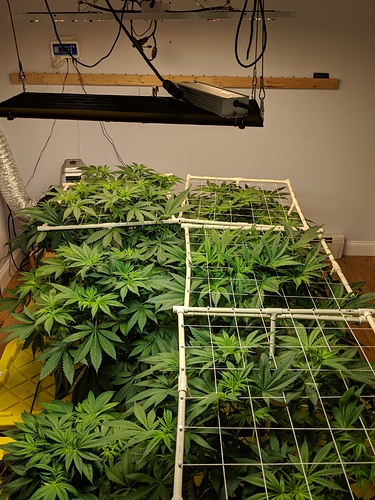 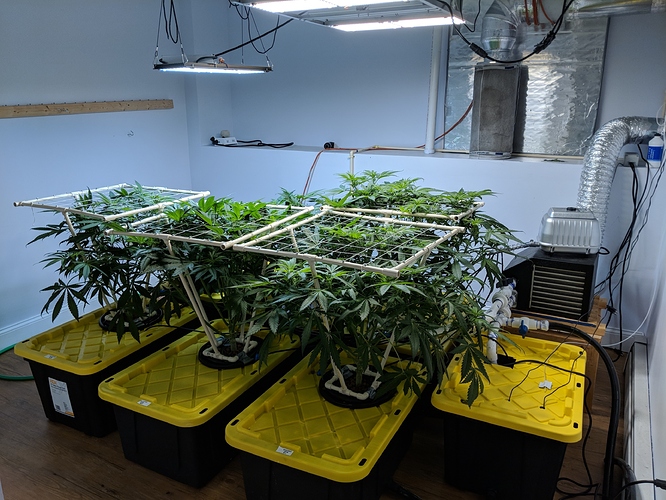 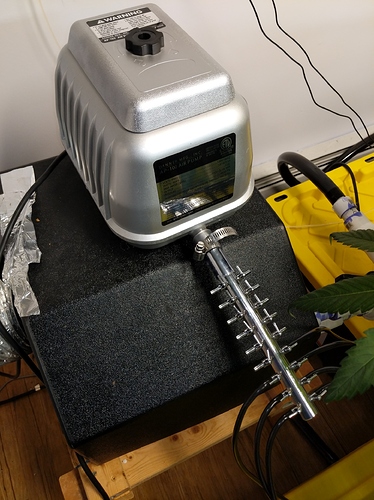 Added a pondmaster ap-100 to the rdwc. Total overkill. 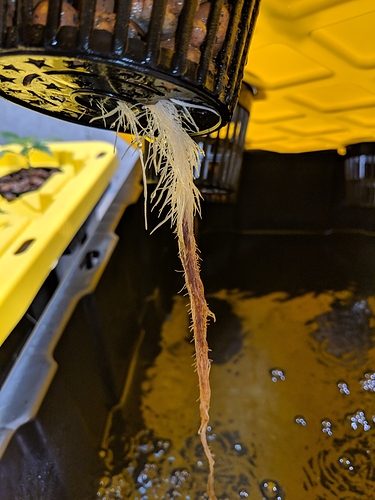 I can only equate this to clonex and new stones. Everything above water line is white and this ain’t mushy or smelly. New stones usually give me a bit of brown material which always washes away eventually. This is a darker hue though. Will monitor

Oh man. I hope you dont have the same brown crap I do. If so, its killing off your fuzzy hairs 0 just like it did to me.

I am pretty sure my brown root crap is some form of mustard algae. If so, its hard as heck to kill. Super strong chlorine treatments slowed it down - somewhat, but didnt kill it. I tried running sterile at 2PPm up around 6PPM in the rez plus direct dunking of the entire root ball into some chlorine at around 200 PPM. The chlorine did kill off all my fuzzy hairs though.

The only thing that seems to be working for me is a copper algaecide. After putting it in the rez and doing several extra strong dunks, Ive finally started to get nice fuzzy roots again. The brown is still there, but the new roots are white and fuzzy.

Good luck with it!!

Naw I’m pretty sure it’s the hydroton dust combined with the clonex. Shit wasn’t as clean as the Jack’s I’ve been using. Smelled like hydro stores lol. Well at least the one near me has this smell.

Oh man. I hope you dont have the same brown crap I do. If so, its killing off your fuzzy hairs 0 just like it did to me.

I was going to say the same thing

Fingers crossed for you @SquirtleSquad

Should have ditched the hydroton long ago, if you’d try sunleaves rocks once you wouldn’t go back.

I’ve been working with venturi effect. On your system installing a hose clamp on the water fall hose. Tighten down untill the water speeds up. Install an air line above the clamp.

The contriction will cause a rolling effect above the clamp. This will mix oxygen and water together very efficiently. With an increase in water speed the water fall will penetrate deeper.

@SquirtleSquad, curious about your Pondmaster air pump you just bought. Does it make much noise? I recently bought a Pond One 12000 and it makes a tonne of noise. Cost me $220 and I cant use it because it is too noisy. Pumps a buttload of air though

You can reduce the noise a lot with foam pads under the feet. What works even better, if you have a place to do it, is to hang the pump from some airline tubing so its not sitting on anything that can resonate to the vibrations.

I don’t hear it over my exhaust fan. It’s no noisier than my GH dual diaphragm which I thought were pretty quiet.

The air coming out makes a shit ton of noise. It also runs pretty warm but so far my water is still sitting at 66-68F so I haven’t noticed a temp rise.

I’m medical so I’m not too concerned about noise. So what’s noisy for you may be quiet for me.

I had to throttle my pump to 50% due to the control res lowering too much so it’s not coming in that hard anymore. But it is no longer my only source of O2 so I feel OK doing that. I’ll experiment with that. I do have some constriction already since I use 1/2" to each site. This is mostly to keep flows at each site even.

You told me I need more O2. Totes have come to a rapid boil now lol

One of the chocolate chunk that’s still in veg had been out of pH for like a week and I noticed a lot of wrinkled leaves that were under the big fan leaves. They were like green. I think this is from lack of light?

When I say big fan leaves the middle finger was 4" wide at it’s widest point and 10-12" long. These were straight and a good green.

This is undesirable trait for me so I don’t think I will be keeping it.

The other chocolate chunk is tipped so it’s bushed out real nice and I have minor margin cupping. This is isolated to just the tops closest to light so I believe this is from too much. Not sure. Every strain with the word chocolate in it has grown like shit. Don’t think I’ll ever buy chocolate strains again