I grew white widow years ago and was always hunting the lemon pheno but never found one. I pretty much gave up on that but just recently popped a couple white widow and got really lucky

This plants smells like super concentrated sour lemon and looks to be a very nice yielding plant so far. I was just wondering if anyone here has grown out this pheno and whats the taste and high like?

From MNS? The ones I popped a few months ago smell very piney lemony . Ive never grew them before so I assumed that was there smell.
Maybe thats the way shanti breeding program is going now. Post results as they go into flower im interested.

I have had earthy / pine mostly but have come across a few citrus / pine. There is another more rare pure

pheno. That was actually the first pheno hunt I went on.

I’ve been doing a few rounds with a white widow that has heavy chem smells. This was a fem pack from some no-name, online, Amsterdam seed shop. I have no confidence these are anyone’s white widow, but some seeds someone put a name on.
I had two others from the same pack that smelled like new tires during flower, but never got to smoke them as they had to get trashed before I could finish them.

I’m trying to pop two more WW seeds I got as freebies from a Seedsman order a few years ago.
What are the typical terpene expressions of White Widow?

[edit] Dank-D answered this above.

I had the great pleasure of getting some one time but the dude that grew stopped growing shortly after. I thought it was some of the most frosty , tasty buds I had ever had. It was also the first time I’d had white widow so I just figured that how it all was.

So naturally I ordered some white widow seeds but still nothing like I had from my friend. I asked him where he got them and I ordered from the same place and still didn’t get the lemon snowcone her had.

A few years later I was talking to him about some of the stuff we had grown over the years and thats when he revealed that he found that pheno after about 50 seeds and kept it as a mother.
This is the same guy that got me my very first NL#5 pine pheno which I miss terribly.

@khaoohs I wouldn’t recommend topping on those …fingers crossed

you get a lemon. There will be no 2nd guessing if you smell it. Smells like lemon heads that were soaked in lemon pledge. Very sour

Cool ill look out for the lemon head pheno.

22 years ago I got Master Widow femminised beans from a valued member of the original OG site.master kush x white widow. One pheno had a real lemony taste and was a resin monster.I trimmed some buds early while the trichs were milky white.One of the best cerebral highs i ever experienced and smoking it was like sucking on Lemon drops

Thats exactly was the lemon WW was like. Looked like it got caught in a snow storm. Im really hoping thats what i have and not just a lemon smelling WW.

The absolute best buds I have ever ever smoked was that Ww, pine pheno nl#5 and a haze that I got from the same grower

I cant help but be super excited, just hope I’m not in for a big let down

My mouth is watering, literally watering, from the description of this lemon white widow. I don’t know that I’ve actually had it, but my friends and I think that’s what we were buying back in the early 90s for $40 an eighth( no lemon). When we would get money enough together to go buy a bag, we would all swear that we were going to “smoke two bowls this time”. 2nd or 3rd puff into the first Bowl, conversation would stop. No need to top off right away, and we never did Pac that second bowl! Does it sound like the right stuff?

It was definitely strong stuff I would say 60/40 sativa dom but not in the way you think. It was a very high energy buzz to start off. You literally HAD to do something then after about an hour the indica would kick in.
Just a lemon snowball, frosty as all get out. Almost frustrating to pull apart. The one lemon I have going certainly smells the part but so far definitely not as frosty as what in talking about. Maybe it will start pycking on trichomes later.

@Dank-D exacatly i called it work weed.We would smoke a joint at midnight and next thing my guys were asking me if i was going to get coffee as 3hrs had flew by. I always harvested mine in that milky trich stage for a super upbeat high,others i worked with harvested with amber trichs and had more of a couch lock buzz.

I want a lemon pheno now!

Really sound like a strain snowcap I’ve been wanting to try.

I don’t blame you one bit for seeking this special phenotype of the White Widow!
The Lemon WW pheno is an elusive one, but it’s one you’ll know as soon as you smell it! It’s unmistakable! Think solid lemon with a little WW jive. I’ve never grown it (friends did), but I have smoked it and it’s got a fantastic flavor for those who like lemon flavored weed.

The Jean Guy strain that @lefthandseeds mentioned is a great lemon/earthy pine flavored phenotype of original WW from Canada. It’s well worth growing too!

Oh wow…checking all my plants today and found one single tiny bud with male flowers. I have 13 plants growing and all look great except for my hermi white widow (lemon). It looked like I new growth of a female preflower but after cutting it off I thought it looked a little funny. 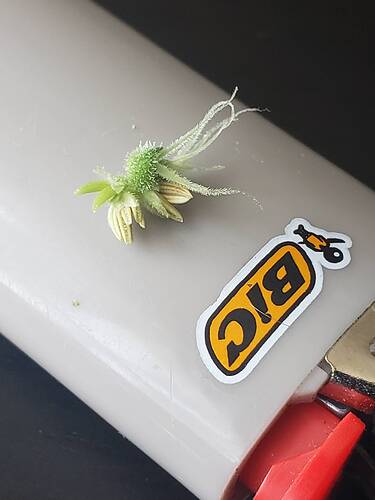 Well i take that back…both of the ww plants are hermi.