I am not an affiliate

Sponsors For This Comparison:
@VIVOSUN https://vivosun.com/
@PhlizonLED https://www.phlizonstore.com/
I would like to start this journal off by saying THANK YOU to those who were interested enough with this comparison to participate in it!

About Myself:
I am an old school “Hippie” grower that has spent the last 17 years running various different sizes of HID’s.

I have ran everything from 250w digital ballasts, all the way up to a 1kw magnetic ballast and in between.

In the years that I have been growing, I’ve always had my wife in my ears about how my garden setup is consuming too much hydro and that I needed to start growing outdoors more to bring the hydro down.

For the past few years I’ve let my wife talk me into running outdoors for flowering, but this year I was determined to put up my indoor garden again, regardless of how much I have to listen to her complain…

After months “winter, spring and summer this year” I finally talked her into letting me put up the garden again, but she didn’t want me to hang all of the HID’s I have “several of them ranging from 250w-1000w”, instead she wants me to use as little hydro as possible…

I started talking to her about LED’s and how they are showing to be better lights, save on hydro, and produce better results.

At first she was curious about them, but then she seen how much some of these LED’s costs and instantly said, “The lights you have work fine, you do not need new lights, just use less”…

Me being me I was not taking her no for an answer.

After spending all of our “Canada’s Wonderland” vacation money on dirt this summer, I figured why not push her more. “she was and is still PISSED about me taking our vacation money, what’s just a little bit more going to do lol”

I went out and found a @spiderfarmerled SF4000 from an off duty officer “IRONIC AS FEK” who tried his hand in growing tomatoes and fruits, but it wasn’t for him, so he sold me the light to me for a good price… “He knew I was a Hippie, I carry that old bearded hippie look everywhere I go”

Once the SF4000 was hung and plugged in I started to get the idea of comparing it to the HID, then I started to think “it’s a good time to piss the wife off, I love pissing her off,” I got the idea in my head that I wanted to buy more lights, not only because we all love lights, but because I need them if I am going to convert back indoors… “I am not going to settle with her idea of running just 2 600w HPS in this flower room”, that would be unacceptable compared to what I ran before.

As I started to look around it made me curious “which light option would be the best for this range of power”, not only with amount of light produced, but also budget friendly as well…

I figured that since I have the SF4000, it would be a good base comparison…

As I started to talk to several different companies about their lights and which lights of theirs would compare to this range, to my surprise a couple of them decided they liked the idea of their lights being compared in this range and they offered to sponsor this comparison run!!

So again I would like to say a HUGE thanks to @VIVOSUN Official and @Phlizon LED Grow Light, you all are amazing people and I have truly enjoyed talking to you all!

So without any further delays… 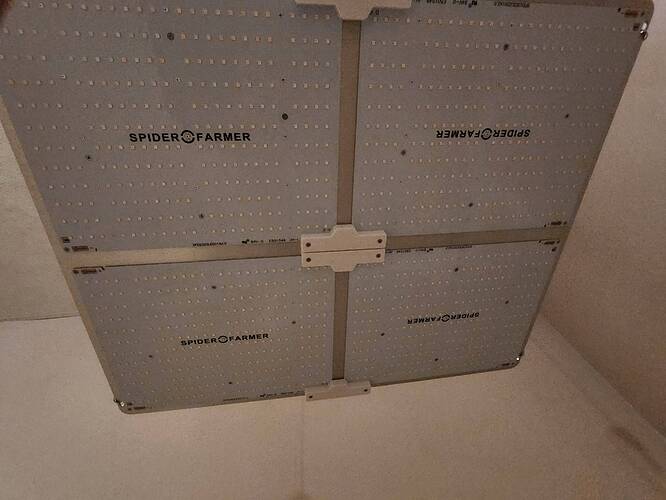 Here is the set up in which this comparison run will be held.

Method Of Growing:
Organic pre mixed soil with various organic additives… I will give all the ingredients and such in a more detailed “mixing” update.

I will be running 4 plants in 15 gallon pots each that I fill with this mix, they will all get the same treatment.

Let’s see if we can pull this off!

I will keep this journal updated at least 1 time a week, maybe more if there are things developing…

Thanks again to all those involved and I am really looking forward to this journey!

Also comments are welcomed in this thread, I would just like to keep it organized and not get off topic too much as we go along, this will be a long journal as it takes a while to veg for 1lb plants.

hydro = hydroelectric power not hydroponics - had me confused for a bit!

Great thread idea, excited to see how this goes.

…As soon as I spotted “hydro” I knew “Canadian”

I love the room!!

This is a great idea mate as the 600hps and 400w led are often regarded as equal, and I use a 400w led and soil so I’m eager to see this comparison grow.

Ive been in a slow upgrade just to get back indoors, my wife was sneaky and moved me outdoors “and made it feel like it was my idea”, she’s been taking notes I noticed lol…

I’ve been curious for a bit how well these LED’s stack up next to hid’s, Im glad I get the chance to showcase it…

Through good and bad, I will post all, I got nothing to hide and if we have mishaps we will learn to fix them together…

Im making a soil batch tonight, I will post updates when it is done…

I have a notepad to write things down as I put them in there. .

Interested in this comparo. I have always run LED. Never HID/MH.

Im watching this one

I just finished mixing soil, I have to put it in bins and water it, then let it sit for a few weeks…

A full update is coming later tonight… I will have my full soil mix in full detail, when Im done with this update, anyone will be able to recreate this soil mix with ease…

I mixed together the soil for this run…

Here is my process for making an organic batch of soil…

I realize everyone has their own ways of doing things, and various different ingredients, but this is the base mix I have been going with…

Sit back and lets mix some soil…

This batch will make around 70 gallons…

First step:
Ingredients, everything starts with having some minimum things…

I will also top dress with compost teas and Microbial Mass

Microbial Mass: I’ve never used this before, but its in a crazy ass container and this stuff is not cheap at all… This sample size bottle sales for over $90.00CAD “wont say sample, but same size, same bottle ect”.

Step 2:
I lay out a 9x9 foot tarp to mix things up with, cant be making a huge mess…

I start with the Promix, I break up the big chunks by hand…

Once the big chunks are mixed up, I add in the dolomite lime and mix it up

After the dolomite lime is when I add in the sea compost, this will give added calcium and trace nutrients "seaweed and shellfish’
I will then move the soil back and forth several times to mix in this sea compost really well.

After the sea compost is mixed in well “broken up chunks by hand”, I then add in the worm castings and then mix the soil again.

Worm castings: 20 litre bag “you could go more, but I also add bunny poop along the way, I got 4 rabbits”.

Once the sea compost and worm castings

Next up after the cricket manure has been added comes the extra blood meal, I then mix both of these up together…

Once the Bokashi is mixed up really well, I put in Bat Guano, now some will tell me im wasting it here, but bat guano can be used for veg as well, it has trace nutrients and boron, I add this lightly in pre mix veg soil and wont top dress with it until flower…

Once all this was mixed up really well by doing the back and forth method, it was time to add the Gaia Green.

Once the Gaia Green is fully mixed, all we have to do now is place it in containers… I have 44 gallon trash bins that I’ve used for years.

After this soil is mixed, I then sprayed it all down with about 1 1/2 gallons of water from my backpack sprayer “a bit overkill but I was bored”.

Now that it’s mixed, watered, I placed the lids on top of the containers and I will leave then closed for around 3-4 weeks to let micro life start to form, after that its all systems go, by then I’ll have everything going.

This is the conclusion to my soil mix and the way I mix things, I hope it was thorough and informative enough to follow along…

Feel free to try this mix, or don’t, it’s been working well for me and Im going to stick with it.

I hope you enjoyed the soil mix, more updates to come.

Great intro and a nice soil mix tutorial! This should be really interesting and I’ll pull up a chair.

-Grouchy
PS, regarding the Wife,

Thank you, it took a bit to put together that soil mix tutorial, I tried to be as informative as possible, goal was to make it simple to follow along with so anyone could replicate this mix…

I’ll take a pic of the soil life that forms in a couple weeks, it should have a really nice web on it by then.

Always like seeing new vs old technology comparisons , will be poking my head in from time to time see how this dualing match turns out

Where are you scoring the bat guano?
Last time I checked, Canada customs were still not letting that stuff in. It’s been “under review” for most of a decade…

I got that bat guano a while ago at a garden centre, I totally forgot I had it until a few weeks ago when I was prepping for this…

I figured why not break it out and use it up…

I have been using Gaia Greens mineralized phosphate, but I figured I may as well use this…

I don’t even know if I can replace this tub, I haven’t looked in a bit.

I do know with this bat guano you don’t want to overdue it… I mixed in that 1/2 cup at the start and wont hit them again with it until flower, “I will make teas with it”.