Good Morrow, OG. Documenting my first grow and really love the OG community. I’m sure I will come to you guys when I have (newb) questions that arise!

With that said, let’s pop some seeds!

I will be growing seed to harvest in my 4x4 basement tent, using soil, and a Mars Hydro TS3000 from start to fin.

-Germination Started May 13th-
Seeds were placed in a cupboard in a glass of water for 24hrs (all seeds except the Pink Pineapples are atleast 2+ years old judging from when these strains were released on insta). Seeds were placed directly in soil after soaking, with baggies over the top of the Dixie Cups to keep in moisture, also in a dark tent. Most seeds sprouted from soil within 2-4 days and baggies removed. I initially tried to pop 3 Urkle Lemons, only 1 germinated

So I put one more in some water day 5/6 hoping to get it to pop asap, I’d love to have 4 females to flower. And who knows if any of them herm on me, so maybe even more.

The 1 Urkle Lemon that did pop, looked like it coiled a bit in the soil and decided to sprout with a curved/misguided stem at the base on day 4 (pic attached), so I decided to gently place some more soil around the base where it was kind of coiled up. I may have placed it too close to the surface. Another 48 hrs after adding some soil to the base of the stem, it seems to be healthier now, so that’s great it wasn’t damping off as I initially thought. (It does have a more purple looking stem than the others, but since it’s got Purple Urkle genes I’m hoping its normal for this strain.). I popped two more beans (Ape Tranaquilizer from Calyx Bros) about 10 days after the first set, to make up for the lost Urkle Lemons. they both germ’d 100% and are looking healthy and benefitting from me dialing in my grow space the last two weeks.

So far, growth seems to be a bit slow for Day 7? (Day 4 from breaking soil). But I dunno? Seedlings are starting to peer over the top of the cups now. Are they stretching? My light is at 25-30% Power, about 30 inches away.

The Shiloh Z and French Macaron have both been the healthiest from start. There is a weird colored spot on one of the cotyledons on one of the Pink Pineapples (see pic), but I think it’s from the seed having a hard time coming off there? Hopefully a non issue since cotyledons can be funky.

Kind of disappointed with only getting 1 of the 3 Urkle Lemons to pop. I have 1 more in the works that’s been sitting under soil for about 36hrs after soaking in water for 12 hrs and nothing so far. Probably will go to paper towel method next time, eventhough I think it has more ways to stunt growth initially, its worth it to know they sprouted.

I’ve (distilled) watered each cup a total of 2 oz water (plus pre-moistened the soil mix).
1 oz on Day 2, 1 oz on Day 4. I think I’m overwatering. The cotyledons seem curved down a tad and like I said - just seems like kinda slow growth at this point?

Temps have been a little cooler than I’d like for this stage, in the high 60s/low 70s. It can get down to as cool as 65 for an hour or two in the early morning hours if the heater goes off, but hopefully that’s not too cold. It went down to 60 on the first night, so I added a small ceramic heater to the intake which is helping stabilize temps a lot. It’s starting to finally warm up here though, so I don’t anticipate too many issues with cold temps until winter.

Day 7 recap: Since the soil was pre-moistened, I probably didn’t need to water on Day 2. Combined with the previous night’s cold temps I think that set me back a day or so. Then I watered again on day 4, probably a day or two too early and stunted growth a bit again. Plants seem to be in a good spot now though on day 7, and should be fine barring any setbacks. 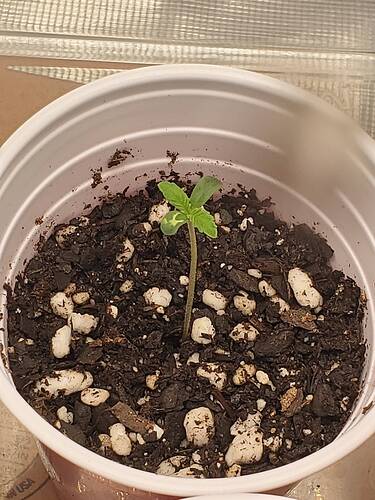 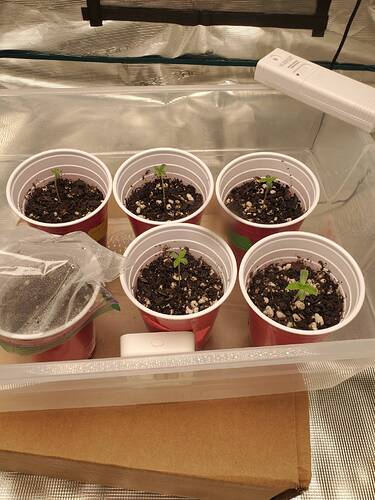 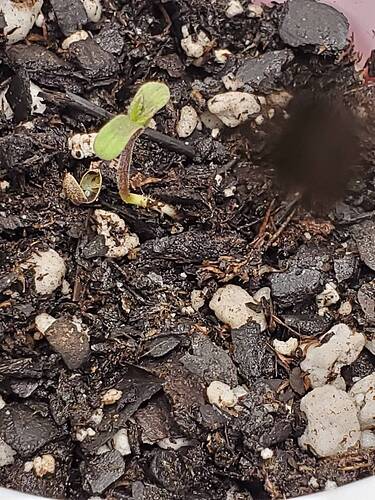 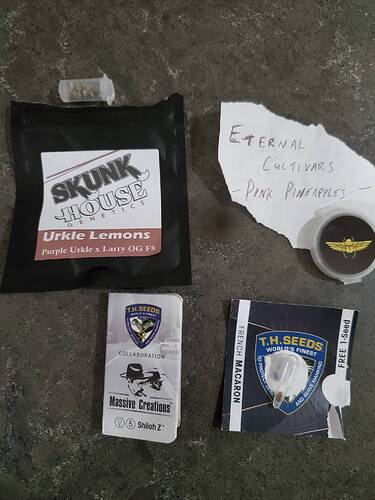 You don’t mind if I watch. Do ya? The fox farms Ocean Forrest caught my eye. I used it for yrs. I make my own grow medium now. It’s not as rich in ingredients as fox farms but it does what I need it to do. If it does you half as good as it did me. You’ll love it
Also , 70 °f is a prime. Temp. For the air around the plant. If lights are warming the plants the cooler air might be good for it. You’ll want to keep your water/feed about 65° . usually this is done by just sitting container in front of a fan in the room that’s 70° . water is usually cooler than the atmosphere around it…
When my seedlings come up I have a set of fluorescent tubes lighting them up. I.D.K. about LED’S . But you can almost touch the plants with the glass and it won’t hurt them at all. I usually go 6" . once they get proper light for 6 days and the first set of reg leaves start taking off getting thicker, wider and longer I’ll start feeding a weak solution. By day 10 they are ready for 400w’$ of the blue light and some high nitrogen compost teas with willow and coconut water. Are you amending with any bat guanos’? Or micro-organisms?

Hey thanks for following along!

I haven’t started feeding anything other than what’s in the soil to start. I wasn’t planning on giving it anything for atleast a few weeks.

They look healthy to me. Don’t feel like you’re setting yourself back, it ain’t a race. It’s good to be concerned about too much watering, but since you wet the soil first u can let it dry over time. And if you get worried it’s too dry just use a spray bottle to wet the seedling at the base which will keep it alive. Once they get a little bigger is a lot easier to tell. In no time you’ll know just by looking at the leaves or lifting the container and feeling the weight of it (or lack thereof)

I used ffof on my first grow and then strayed away for a cpl grows, now back with ffof. Since I did it that way, now when I smell ffof it instantly brings me back to that first grow and when I met my wife. No other soil smells quite like that. I could pick it out blindfolded with ease

I’ll pull up a chair too, y not. You’re definitely more prepared than I was on my 1st run… hell my first few

Running same light but in DWC, following along and learning, thanks for posting!

Great reporting. I am pulling up a

to watch the grow.

Room for one more

I also had a freebie Thseeds French Macaron curious to seee how yours turns out. Mine had good smell through flower but didn’t show up after dry/cure and lacking in flavor. Surely my mistake. Heard good things about it though! Let’s Grow!!

Welcome aboard, mate! I have heard nothing but good things about it too.

Just curious, why do you think it was your mistake it didn’t have good flavor after the cure?

I honestly am not really drawn to any of the cookies or hyped strains (French Macaron is Gelato 33 x French Cookies), but out of the strains I did receive - the FM from THSeeds was really the only one that had any reviews online, and they were mostly positive so I figured I would give it a whirl on my first go. If you’re weird like me it just felt odd having one little seed sit in its own little tiny seed container in my storage case lol. Had to pop it.

Nobody else to blame really only completed a couple grows. And now that I look at it looks like I may have chopped a little early I dunno 🤷 from what I remember mostly cloudy with a wee bit of amber. 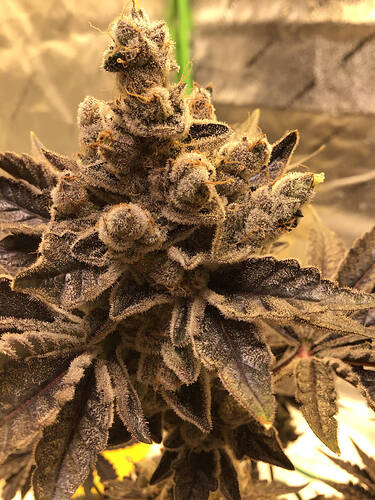 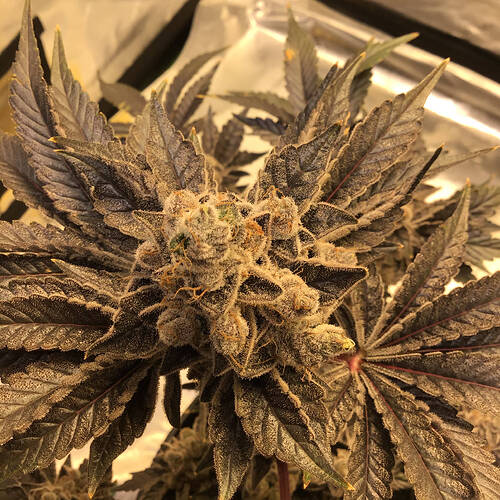 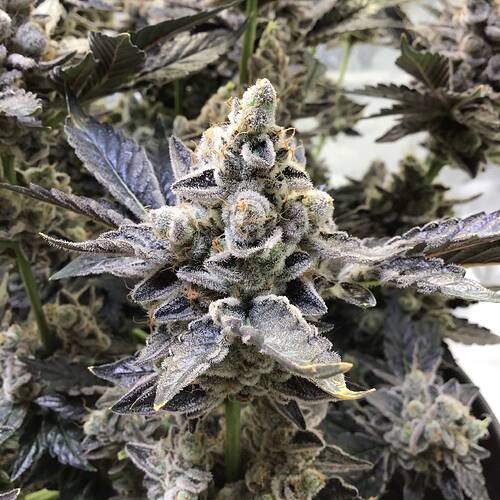 You did great, flower looks dank as hell

Looks great to me.

I got High just looking at your budshots

Everything is looking pretty good at this point (Day 10 from starting germ).

I was gonna ask - since it will be time to start feeding these things some nutes soon, can anyone recommend a basic nute schedule/regimen that will work for my medium?

Unfortunately I gave up on the last of my Urkle Lemons

Only got 1 of 4 to germinate. I am thinking it might be a little too late to pop a few more replacements? It would be about 2 weeks behind the rest at this point. Hoping I can get at least 1 female out of the remaining 2 Pink Pineapples and 1 Urkle Lemon.

I know with Ocean Forest straight you should be o.k. Straight water for couple months. You going to keep organic with teas, top dressing ?

I’m not really sure yet to be honest. All organic would be preferred, I’m going for flavor and quality opposed to yield.

am thinking it might be a little too late to pop a few more replacements? It would be about 2 weeks behind the rest at this point.

Never a bad time to pop another seed or 2.
2 weeks behind isn’t nothing. Give them best spot in room. They catch up, then maybe only 1 week longer in the blue light if needed.
I’ve seen some good organic growers here. Bet they tell you anything.

Hey there dude! Don’t be too concerned about the slow growth, I’m on my first grow right now and the same thing happened with me. The first week or two the plants grew SLOW. But once the second set of leaves emerge they will explode! Sounds like you got the right soil and a good light, I seen great reviews on that light in a YouTube video. You’ll do great man! Like dude up there said, water by weight not by a schedule per say. I’m pulling up a high chair for this one!

Can you control your temps or is it just at the mercy of what the temp is outside? Those temps are pretty low. That’ll slow down growth a lot. LEDs do great with the room temp around 80*-82*. Get your humidity in the 60s and they’ll grow quickly.

Great info, thank you! I will increase the Temps and Humidity a bit and see if they respond. I have somewhat control of the temps for now, but better control of the humidity. My ultrasonic humidifier from taotronics seems to be working great. I can set the humidistat and it turns itself on and off accordingly. I have a better heater arriving in a few days.

Edit: I also noticed my first issue today. Can see some yellowing misty looking discoloration and slight curling/crisping down of the leaves. Seems the lights are a bit low? (About 26 inches at 30%.). I raised the light a bit to see if the plants respond better. 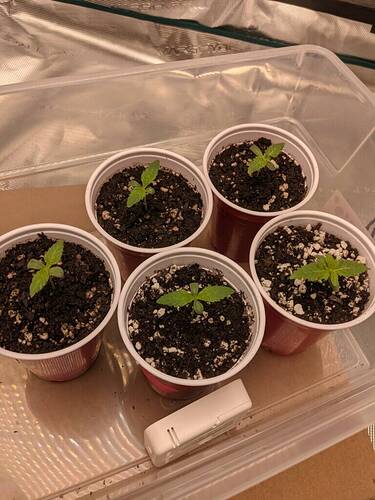 I’m no expert on nutes n stuff but if you want organic Nectar for/of the gods https://www.oregonsonly.com/ will send you a really nice sample kit free just pay shipping smoking deal there’s like 6+ bottles of organic goodness in there. Email them ask for the sample kit.