Hmm are you sure your humidity sensor is accurate? Do you have another to check with? They’re notoriously miscalibrated. Moisture on the walls but reading only 54% RH doesn’t sound right at all. I wouldn’t get moisture on the walls until it’s 80%+ RH and no air movement.

Sounds like you’re pretty good overall though, just need to get that moisture in check… You got this

I am skeptical of it for sure. Its a wally world model, so probably shyte. Was about to buy a fance one at the grow store, but a buddy convinced me that the cheap ones worked just as good.

Just ran over to buddys place to check on everything. I was pretty surprised at how things looked. The entire tent had filled in and the canopy is now sprawling across the entire footprint of the tent ! The exhaust fan is dimmed so low that its just barely spinning, but it has had the desired effect on the environment. The temp was at 71 and the rh was at 50, BUT with no moisture on the walls. A couple of the SSDD had started to wilt a bit from drying out so I gave them all a proper watering with the pump sprayer. Some things I noticed.

First off when I mixed up the nutes, I finally actually used the ph test drop kit (which had fallen into the pump sprayer tank the first time I tried to use it) and found the ph to be pretty high at about 7.5 or so. I adjusted the ph and hope that clears up some of the damaged areas of the leaves. There is a distinct yellowing at the tips of some of the leaves. My gut feeling is that it was ph related, since I hadnt adjusted any of the mixtures I fed with.

Next, Its obvious these led lights have a dramatic effect on how plants grow. Ive never seen anything like this, ALL the plants are bushy as hell, super dense, non stretchy growth and tons of natural branching, which I dont see that often on untopped seed plants.

At the rate they are going I think I will be right on target for my projected flip date of around October 5th. I will get some new pics up in a day or two.

Sounds good, dude! I will say that my light (LED) has the same affect on my plants. Very compact, bushy, no stretchiness at all. In fact, they almost grow a little TOO compact. Makes it really hard to check for pre-flowers, sex etc.

Anyway, good to hear. Looking forward to following your progress for sure.

Exactly what I discovered today ! So dense its hard to check for preflowers. I raised the led up a bit today. Hoping it will give them a bit more stretch. But damn, these things are amazing ! 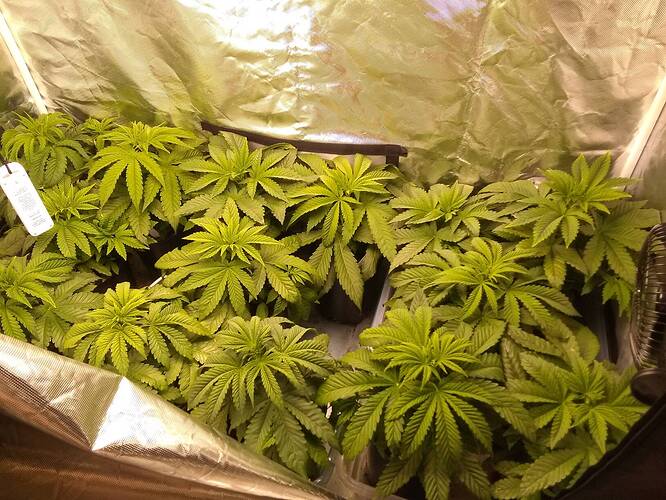 IMG_20200922_1151478651632×1224 401 KB
Here they are today. This is day 29 of veg. The led makes taking pics pretty tough. It hides some the yellow/burning at some of the tips as well as some necrotic areas of leaves. Im hoping its just from either having the ph off or from having the nute mix get on the leaves, possibly combined with the light being too low. As I mentioned above, I raised it up about 6 inches today just to see if it reduces these necrotic areas and encourages a bit more stretch (never thought id say that. lol)
The growth is so dense its a bit hard to see many differences in strains. However, one thing I noticed is that a few of the SSDD have giant leaves, like long too, with a pronounced middle finger. The C funk leaves are more indica in appearance. Really fat wide blades.
I did some defoliation and removed a few bottom branches this afternoon. The growth was making it difficult to get the sprayer tip under foliage so it didnt hit the leaves above the dirt. I cleaned them up so they could be watered more effectively and removed some of the leaves with dead spots.

I also labeled each plant, since cloning isnt too far off now. I did so completely randomly. In the past Ive done it by which ones looked best or in the order they popped, but tis time I just went with anarchy.

The root growth is just crazy, never seen so many thick white roots shooting out of the bottom of these pots before. Must be the Hydrogaurd, never used it in soil before, only hydro. I am planning on up planting into the 2 gallons which they will finish in this week. Maybe 5 days or so. Figure Im about 12 days or so from flip.

I also set the light back on a timer as an experiment to check the temp drop again. Its only going to go off for 2 hours tonight. I will see what effect this has tomorrow. Also hoping to bring 8 of these back home to my place. Just gotta spend the rest of the day getting stuff cleaned and set up !

I think raising the light helped. They looked better yesterday, except for a couple that had dried out and had begun to wilt. I watered them all thoroughly with a pretty strong mix of pb nutes. Gonna upplant to the 2 gallons asap, as they are definitely super root bound in the 1 gallons already.

Yesterday I up planted 4 plants into 2 gallons pots with Happy frog watered with the pb nutes. I found 5 for sure males, one of which I tossed today. It was a clusterfunk. There is at least one or 2 more possible dudes. Today I up planted a couple more and set up the tent at my place. Felt a bit like christmas setting up the gear ! The cloudline fan is on the lowest setting, it is virtually silent. I need to get a circ fan going asap though, as I dont have one in there at the moment. I just need to get one sterilized. The current temp is at 67 with lights on according to the cloudline controller. Here is the last pic I took at my buddy’s place before any up planting. This is the whole group, the back row of 6 plants are the SSDD. I left one that looked female at my buddys place, the rest came back wit me 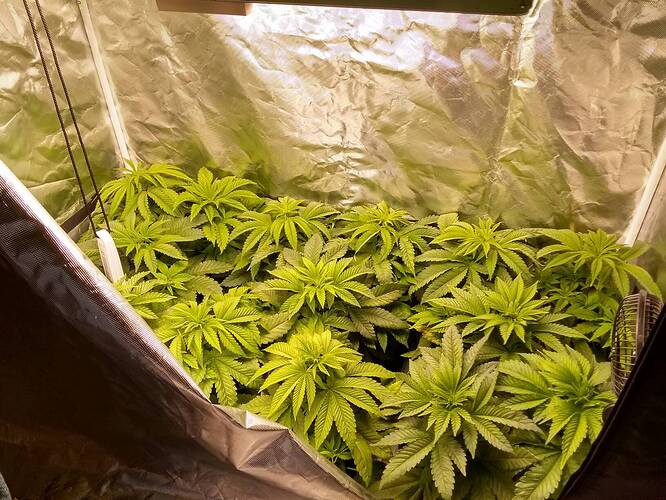 Looking good, dude. Bummer about the Clusterfunk male. 67 with the light on? Jesus, where do you live? It was 102 here in LA today…

Brrrrrr, that’s fucking COLD. I start bitching when it gets in the low 60’s. And that won’t happen for a few months.

Fellow thick skinned Coloradoan here, pulling up my chair just in time from the looks of things!

Keep up the good work and best of luck.

I had the SSDD Butter cut I got from PJ and it was AMAZING. I hope you find one like that.

Hey thanks for stopping by to check it out ! Always happy to meet a fellow Coloradoan. Yeah the SSDD has me excited for sure, especially the way some of them are already stinking ! There is definitely at least 1 male ssdd so far, not gonna toss him just yet.

So I discovered an epic flail yesterday. I went to my buddys place to water the plants. As I was mixing the nutes I noticed that I had the PB pro BLOOM, not the grow. To make it worse, I then realized that I have been using the bloom instead of the grow for the entire time that I have been feeding !! F !! No wonder they looked a bit weird to me. Really nothing I can do about it now except give them the Grow for the next couple of feedings before flip, maybe extend a bit into flower just to pump them up with enough N to get through flower properly. Back at my tent I up potted 1 more of each strain (before I went to my buddys and realized what I dun). I took a couple of pics of the root balls. These are not like anything Ive ever seen before, especially on such young plants. 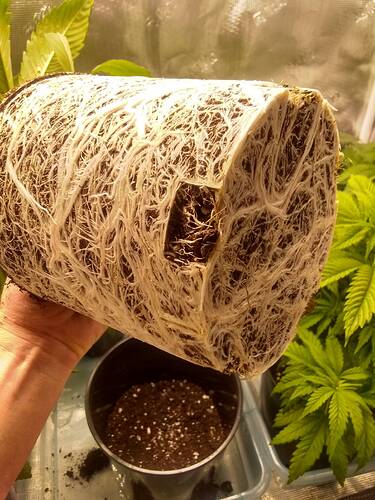 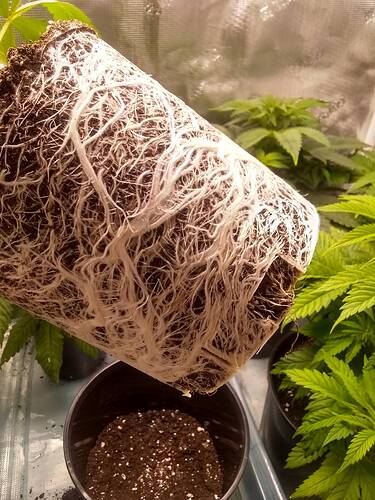 Well, if nothing else, it damn sure didn’t inhibit their root growth. I’m sure you’ll be fine, man. Wouldn’t stress about it too too much.

Lots of updates to post ! So today is day 44 of veg and I just switched the timers on both tents to 12/12. Tomorrow will count as day 1 of flower. So the final count (so far) is 4 females of each. 2 males of the ssdd and 5 Clusterfunk males. Almost exactly 50/50 m/f ratio. I kept one male of each in clone form. I took 28 clones yesterday. 3 of each female and 2 of each of the males. Here is a pic of a couple of the clusterfunk males. I believe the one I kept cuts of is the shorter one, it was way louder smell wise. A few of the other males also just reeked when I cut them down. 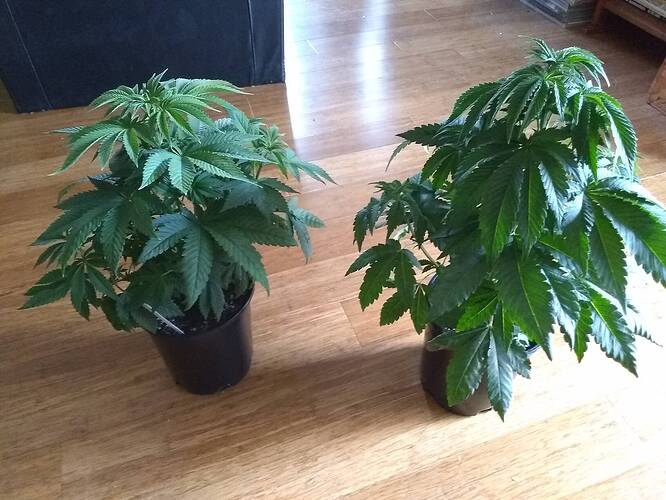 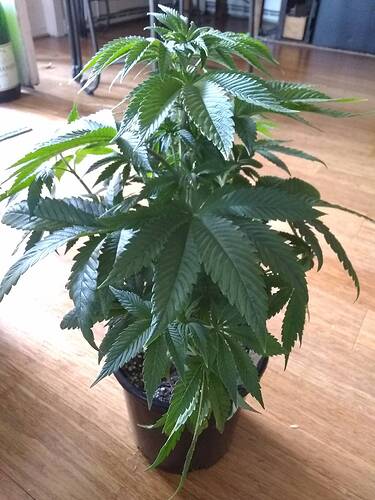 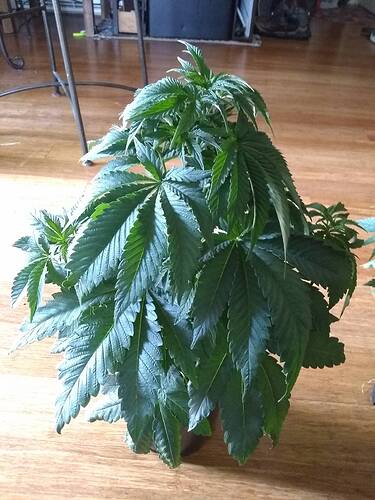 Sunshine daydream(#3 pheno) in the other tent. Outstanding plant, the beast of the garden so far 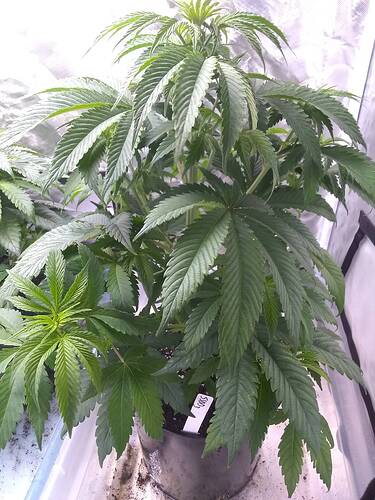 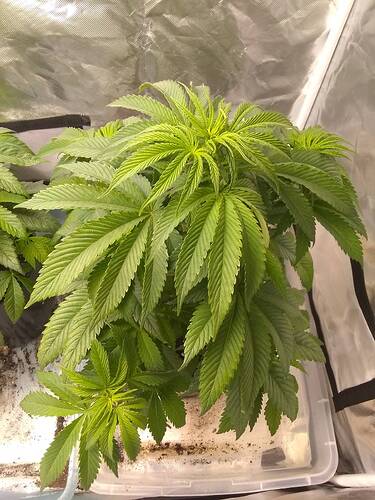 Clusterfunk (#5 pheno) also in the “other” tent 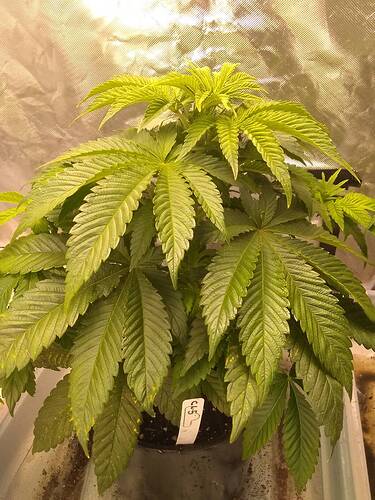 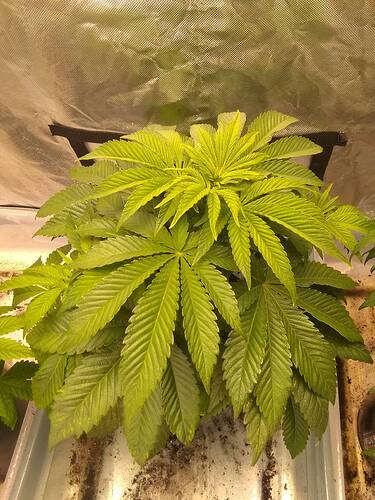 Clusterfunk (#4 pheno) This one looks a bit more deficient than the others. Also at the “other” tent 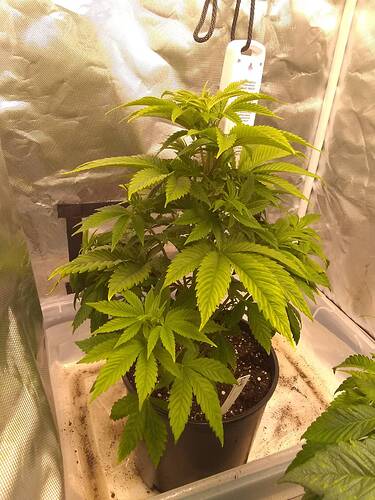 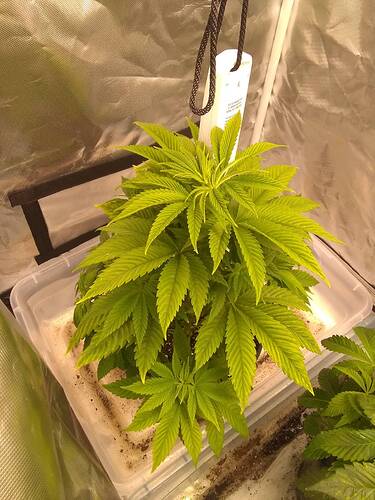 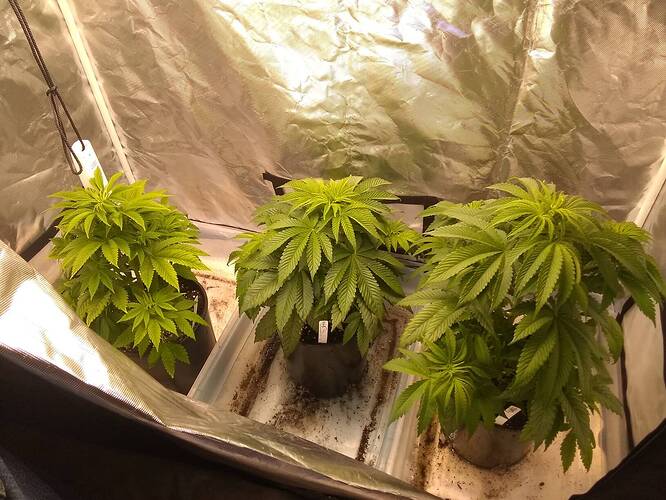