So I ordered from Choice Seed Bank and used Stealth shipping and my order got seized by US customs. Super bummed out… I received a letter in the package… anyone else have this issue? 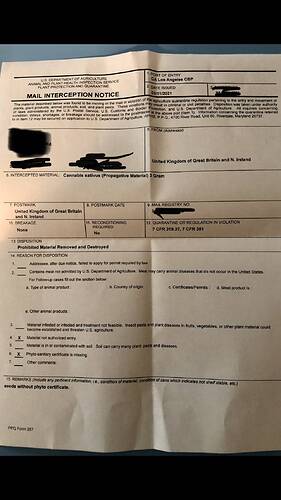 It seems like that used to happen a lot more but have not heard so much lately. Choice will probably reship since you went with stealth.

Oh Shit!!! I quite ordering seeds from out of country 10 years ago after I lost 3 orders in a row totaling over $500.00. I have had several packages from canada the last couple years no problem since joining here. I haven’t heard of anyone lately having problems. Sorry for your bad luck. Hope they make it right. Who did you order from?

Sorry for your bad luck man but it’s unfortunately just that, bad luck. Did Choice give you a guarantee? I would imagine they will reship since you paid for stealth.

I ordered from The Choice Seedbank https://www.choice-cannabis-seeds.com/

I shipped with stealth guarantee delivery, I contacted them but no response yet.

Damn that sucks dude, ordered from them this past spring/early summer did stealth and had no problems. Really surprised cuz they hid the seeds pretty good. If I recall they do have a guarantee for with stealth shipping to where if it gets siezed then they would resend once. Gonna hop over and check cuz I believe stealth had tracking as well.

I’d say your good just get ahold of them

I think I might have over medicated. Don’t know how else I missed that

I just recently had a package completely emptied of all seeds in said package. The damn seed packaging was still their in the envelope, and I did not get any kind of letter explaining the opened, ripped, and empty package. Somebody’s growing some kind right now.

choice seedbank is the same thing as attitude seedbank… same selections, same number of packs in stock, everything connected between the two. i think the only thing is that attitude made choice when too many orders were getting seized. i don’t know if it’s the same thing now, but attitude shipped from england, and choice from ireland. attitude was my go-to seedbank for years and i used choice a couple times after that. i wouldn’t order from them these days unless they had something i really wanted that i couldn’t find elsewhere.

if you order from them and have the choice, definitely order “in original pack” and choose a tshirt or whatever they offer to give you stealth shipping. this guarantees you’ll get seeds if the shipment gets seized. i used to get shirts with every order, but then they switched to wallets. i don’t know what they do now. they’ve honored that policy twice for me, and also once where the seeds i ordered had been smashed. customs is really shitty but other than that i couldn’t complain about much else.

ALWAYS elect the “Stealth Shipping Guarantee”, if offered!!! Might seem costly, but worth it. A few years ago, a +$500/US Order was seized from Seedsman. When contacted and given proof (I quoted Declaration Form verbatim and referenced Seizure Number!!). I soon received a Kid’s Puzzle, complete with seeds AND working Puzzle. FYI ONLY!!! SS/BW…mister

More common than you think, although you’re not in ANY legal jeopardy. I don’t think you have to worry about the Feds knocking on your door. More of a nuisance than anything else. SS/BW…mister

I have had numerous grabbed by customs, never got the letter, heard about it, but i only got the tape.

problem is even though they passed the farm act, it the controlled substance act it says “marijuana and the seeds thereof” according to a lawyer on youtube.

Choice Seedbank is honoring there guarantee stealth shipping and they are re shipping my entire order. This time I hope it arrives at my door with the seeds.

I’ll never order over seas again! Now I need to find seeds that will actually make it to my house…

I think they may keep an eye on you for a bit, or know their methods. Choice would probably try again. But, if you have someone willing to accept a mailing might try a new address.

There are so many good banks here in the US not too much you need to go over the pond for anymore.