Giving Back To The Community

I talked to him a couple weeks ago. The news is he is good but currently busy with a new job and can’t find time to run the forums.

The news is he is good but currently busy

I’ve got 4 of these going right now & one appears to be a narrow-leaf pheno… My guess is that’s the G-13 “grandparent” coming through? But that would require the 88G13HP to be a genuine F1 & not an IBL (right)? 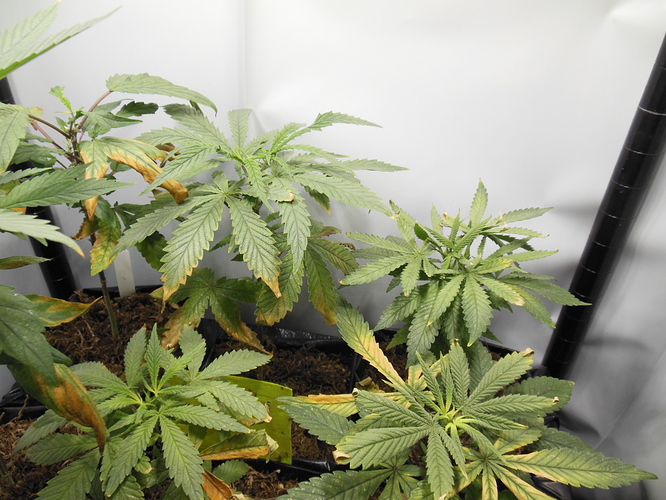 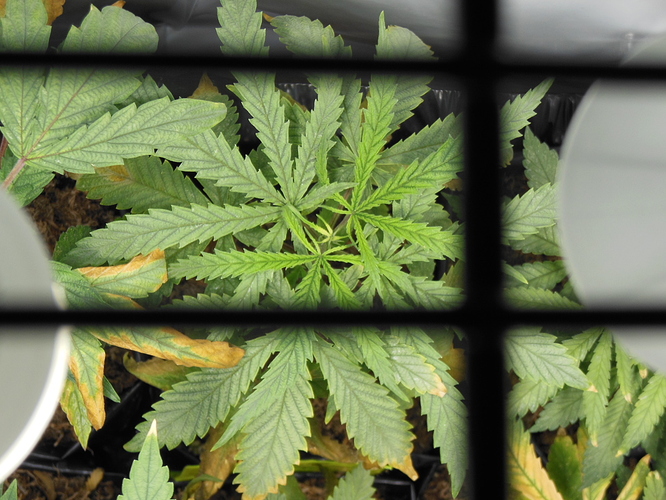 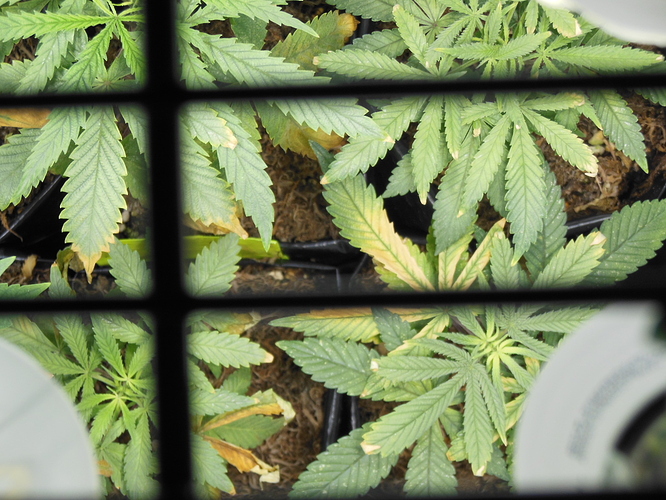 One thing big AG is going to find out is that this isnt agriculture with ultra low cost. This is premium horticulture and the investment is much bigger as is the reward IF done correctly. Which frankly will take more then just a little time. If they model this industry after for instance the wine industry, then these people are in for a big surprise. Small batch growers will rise like cream. In my opinion the market is already diluted with sloppy genetics. And the big AG factor will realize this soon. Becuase when the cream rises to the top all that money theyve been spending is gonna seem like a big waste. Just one mans opinion…

Depends what they were searching for to bring out when taking it out to the ibl.
Maybe the ibl has everything you’re looking for.

Not at all. The more homogenous a parent plant is, the easier it is to find in the progeny, that is true. It’s absolutely possible to find traits from any of the plants in the lineage, some are just more rare than others.

The leaf/plant I mentioned isn’t as narrow-leafed as a Sativa but it does stand out from the rest & the other couple DS’ I grew(all wide leaf).

Anyone else get a DS F2 with a skinnier leaf?

Am I off-base on the G-13 having a narrower leaf & exaggerated edge serrations?

Tempted to start a thread about 88G13HP for latercomers like myself-- it seems like a highly influential cultivar & possibly under-appreciated or recognized?

People have been using the 88g13hashplant in breeding for quite some time , it is actualy rather well known and used heavily by some breeders such as bodhi.

Tempted to start a thread about 88G13HP for latercomers like myself.

Yes please. I am growing out a G13HP88 cross (Jungle Spice) and I would love to know in what ways the Ghash is speaking!

I have a mom of 88ghash…the first time I ran her she was a thinner leaf pheno…I have a pic on my thread. I cloned her and made the clone the mom…well the new clone mom is indica wide leaf with double serration.

@nube you still stomping around these parts?

Hello friends. Glad to see this site continue the giving spirit in the intervening years, with so many preservation projects and people paying it forward. Let’s keep the ball rolling!

I’ve got bodhi’s Pura Vida (LA Pure Kush aka Hollywood PK aka? Topanga PK x Appalachia) going right now on another community F2 preservation run. 4 females, 5 males out of a full pack. Open pollination style. Vegged for about 2mo and had to chop them back several times to keep them small for transport. Lotsa clones!

All of the plants had frost in veg, and two or three of the males were frosty by day 14. Same old recycled dirt recipe, 400w of 5yo COB LEDs in a 4x4 tent. 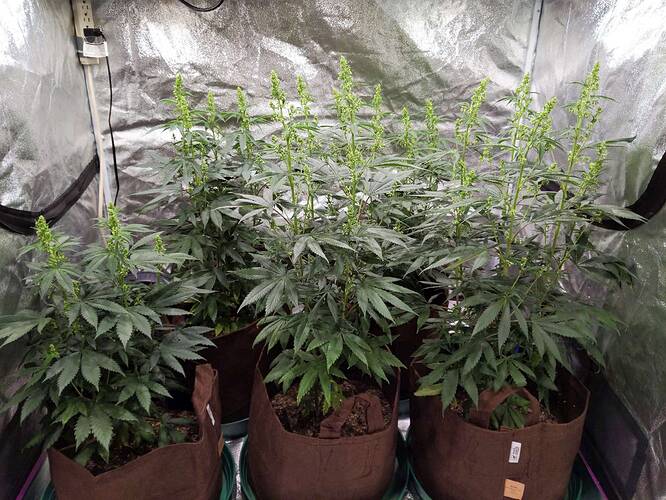 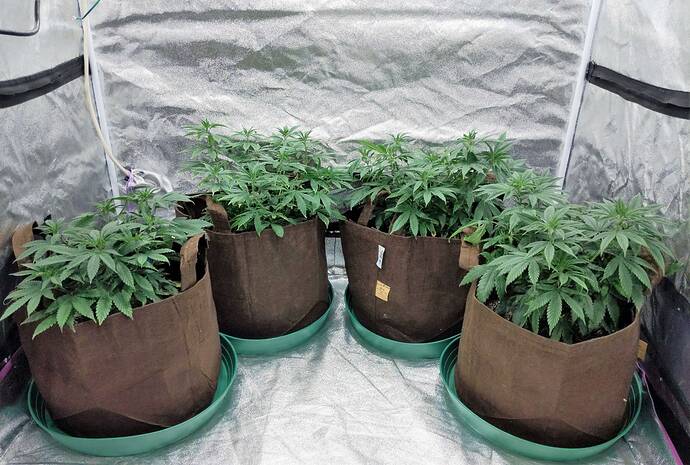 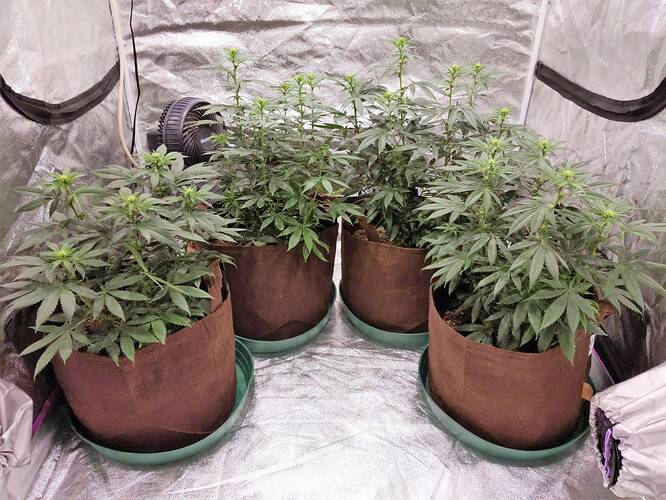 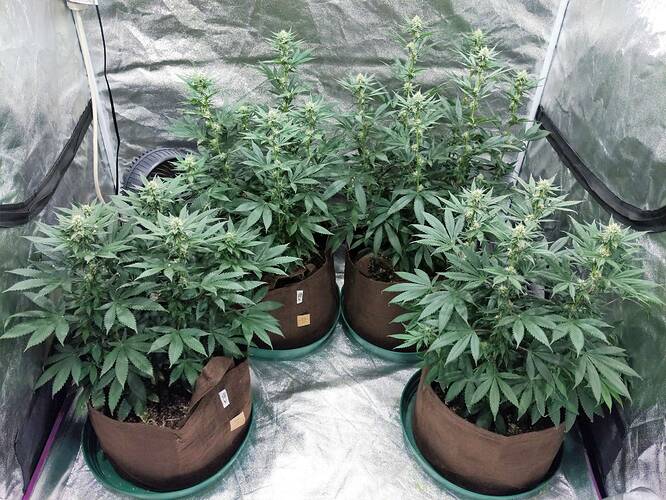 I cut the males before going out of town for the last week camping, stuck the tops in water, and here’s what I returned to. 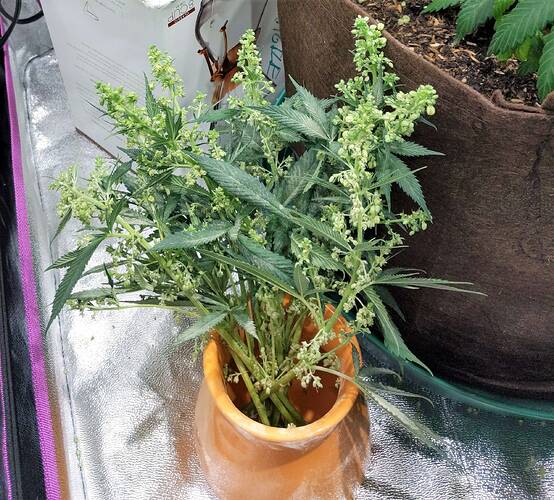 I got home on day 21F and shook the males over each of the females to ensure good thorough pollination. Lots of white pistils. I’m hoping for a Sept. 1 harvest of fully seeded plants. So far so good. 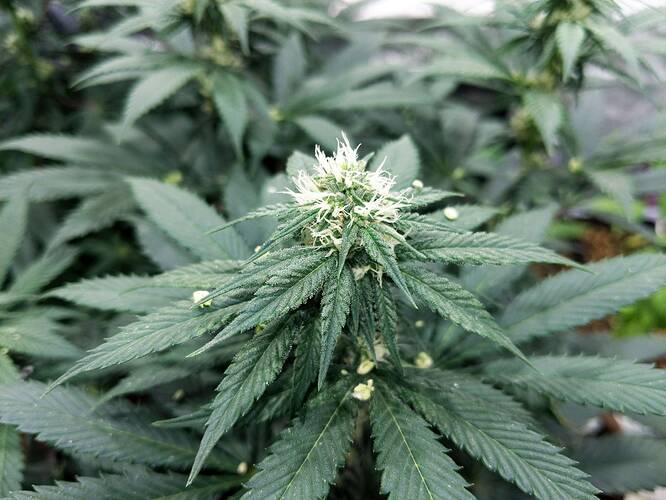 Smells from the males ranged from skunky to musky pine and chocolate, and the females have similar funks with added fermented fruits and sweet candied smells. I prolly should start a new thread for those.

@Barefrog thanks for holding it down in my absence.

@cannabissequoia I saw and maybe the DS just ain’t your thing. No big deal. Plenty of fish in the sea, as they say. But I did want to note that @Torontoke found a narrow leaf pheno in the 20+ females he’s flowered that he said smelled like “heaven’s [sexy bits].” Since other LA Affy crosses (LA Confidential, etc) sometimes have those and they’re super stinky, I bet it’s something in the Affy heritage, not the ghash. But who knows.

@nube hello hope all has been well. Those plants are looking real nice

can’t wait to see the finish!

I bet it’s something in the Affy heritage, not the ghash. But who knows.

I’m still geared up to try again with your gifts

but I’ve gotten the shaft so far with my few stumbles and DS F2. Like a challenge from the gods.

What do you think the “plan” was with that one? (or am I still a novice, & Bodhi doesn’t really have plans?

Hey @Enjoi802 thanks and likewise. PM me here instead of BreedBay.

@cannabissequoia Happy to help if you have questions the next time you try.

Just use KISS and LITFA. But I have to say, you might want to try popping more than onesey twoseys. It’s an open pollination F2, so you’ll probably have to hunt through a couple dozen at least to find one you really like. But that’s why I sent everybody like 50 seeds per pack.

Or maybe you won’t find any you like. Oh well, no big deal. If that’s how the cookie crumbles, toss them out the window as your driving by a nice spot in the country. I Johnny Appleseeded a bunch of wetlands and open spaces around here with DS F2 b-stock and greenies/whities last fall and now there’s hundreds of the little bushes out there, hopefully spreading pollen all across the front range and beyond.

About the “plan” for the Pura Vida cross, I don’t know if bodhi has a plan for each cross, per se. Plans lead to expectations, and that doesn’t seem to be his style of imposing his will upon the plants’ spirits.

I feel like his “plan” or priority is to find good breeding males that allow him to get his personally “preferred” cuts to the public with a fresh perspective. A new riff on an old standby, if you will, or something so unique it begs to be shared. You know he is extra careful about vetting every single clone he gets, especially after all the fuckery out there in the clone renaming world (and the stink made about the Chem 91 JB vs SKVA cuts), so much so that in the last few years he’s been frequently working with stuff he hunts himself.

It appears to me that about two or three times a year, he likes to sift a bunch of different seeds he collects in person and/or in trades, then fgen the ones he finds interesting, and then hunt the fgens for breeding males with specific characteristics. He said he recently hunted a bunch of NL5xHaze a friend gave him, started a big Afghani sift a couple months ago, and is doing a Pakistani sift this fall. Sometimes he takes them 5, 6, 7 generations down the line in an attempt to find those special guys (like the 88g13hp and purple unicorn and the dragonsblood lines).

IMHO bodhi seeds doesn’t seem to be about the latest hype shit, it ain’t about trying to IBL everything to create the perfect Costco strain, and it ain’t about a cash grab like most of the industry who are smashing name brands together to profit. It’s a wife and husband who shared their hobby and passion for plants with the rest of us. The plan isn’t a plan; it’s mostly about facilitating crosses that speak to them and seeing what comes out of it. Sometimes it works out, sometimes not.

Much like everything, beauty is in the eye of the beholder. One person’s trash is another person’s treasure. And who cares, anyway? Find what you like, smile, and be happy with what you have.

Plans lead to expectations, and that doesn’t seem to be his style of imposing his will upon the plants’ spirits.

Kinda the feeling I got.

Much like everything, beauty is in the eye of the beholder. One person’s trash is another person’s treasure. And who cares, anyway? Find what you like, smile, and be happy with what you have.

…and am very grateful.

@nube
I’ve been looking online for days for the old breedbay grow of Sakura and I stumbled on this. So glad I did

.
I acquired your F2 of Sakura last year in a care package from a mutual friend. I will post pics those when I get them started here in a week or so. Thank you for your selflessness.

Hey man, glad to see you here. Overgrow is a nice place with a ton of people paying it forward and preserving old lines. I love it when beans get shared and spread far and wide. Generosity like that is infectious!

Stick around and get in on some of them if you want. Like this Pura Vida F2 thread I got going.

This is my log for preserving bodhi’s Pura Vida F1 by doing an open pollination of a full pack donated by a good friend @MojoRizing from another forum. Consider this Giving Back to the Community pt. 2. Seeds to be given away for free to anyone and everyone once they’re done. Pura Vida is a discontinued cross of the LA Pure Kush clone (aka Hollywood PK) and the Appalachian dad, made by bodhi seeds about a decade ago. Here’s the lineage: And here are a few links to other grows and lab tests…

I hope those Sakura F2 turn out great for you! In case you didn’t see it on BreedBay, here’s the link to the Sakura tester grow: