A most excellent philosophy, and it shines in your work

Da green from mr sparkle looking like the start of buds . 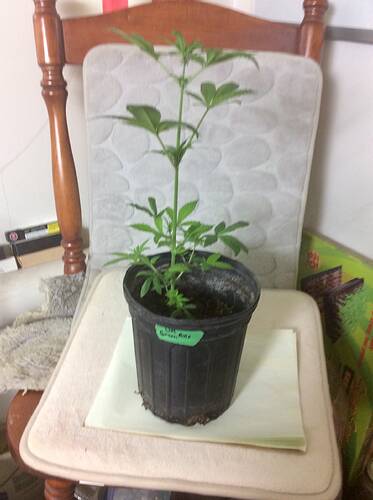 Slowly moving along, the left side is starting to look better its probably starting to produce a bit of humidity that plus daily sprayings have helped, right side still mopey increased the watering on the Lemon Pies and the Purple kush seedlings are starting, two are looking weak but ill let them go for now. 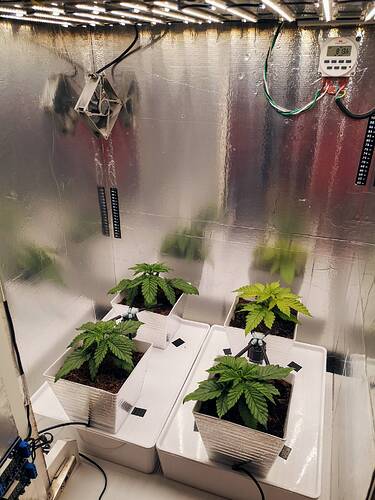 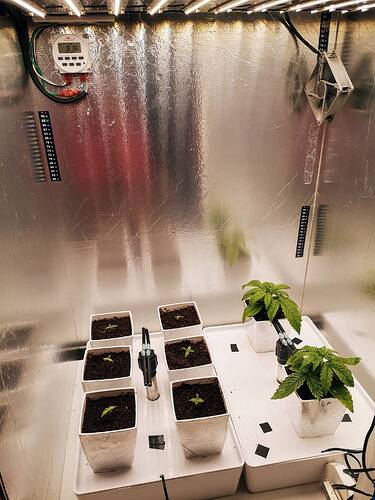 Refilled the reservoirs last night a two had creeped up pH wise more than i would of liked but otherwise decent. Still spraying the back right Lemon Pie with CS at lights out, and been spraying all of them with water with 1/4 feed whether it does anything or not but has been helping with the humidity till they can start producing enough on their own which is starting to get better. 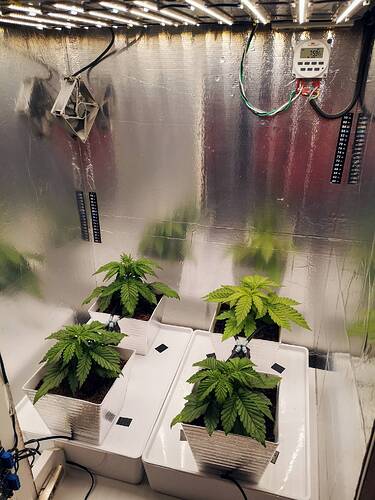 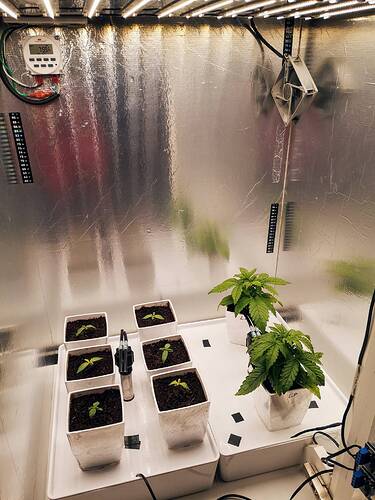 Also gonna try a side by side on the left cabinet, took advantage of a 500g promo deal @AquaTerra had going on for us Canadians on some Megacrop 2 part, interesting to note is the clarity of it compared to the 1 part but the left res was made up unisg the 2 part per greenleaf nutrients calculator for midveg/early bloom, and the right side was made up with 1 part at the same EC level to match which is were i run anyways, so its looking like this might me a sediment less version from greenleafnutrients, but still have to see how it runs though. 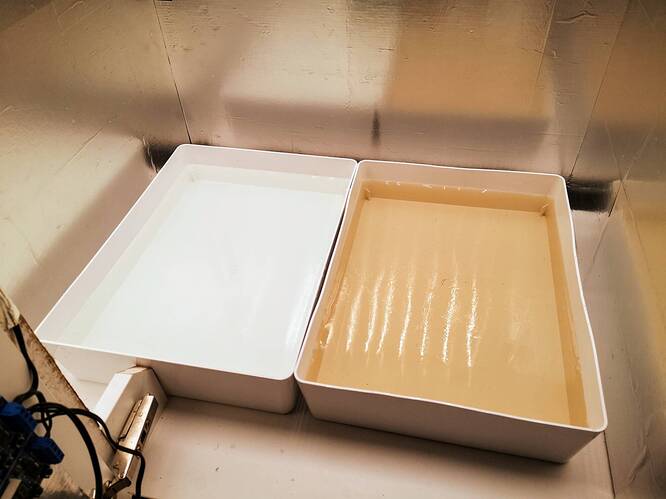 Also took some pics of me making a new batch of CS for @SaintAliasKnife as we were chatting over in discord but figured id throw it up here to show how simple it is.

Super basic setup composed of three 9 volt batteries some wire leads with alligator clips ends, and a one oz silver bar that i had cut in half years ago with only the silver being submerged in a glass jar of distilled water, also added a cap full of my old CS just to kick start the process as it goes quicker when you do. 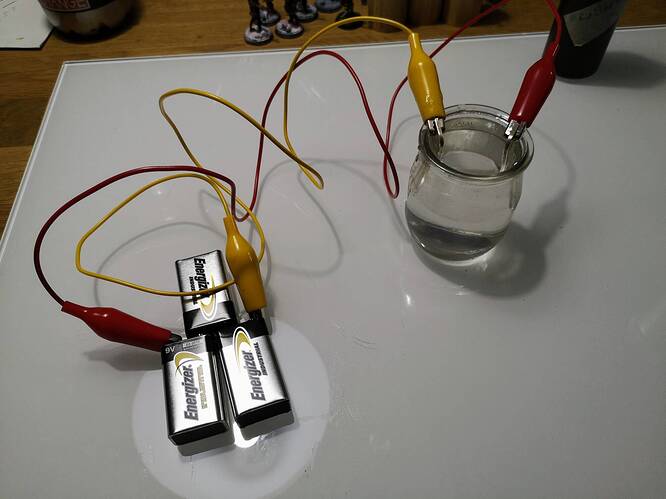 Only about 30sec-min later, with alight stir you can see it working with some side light. 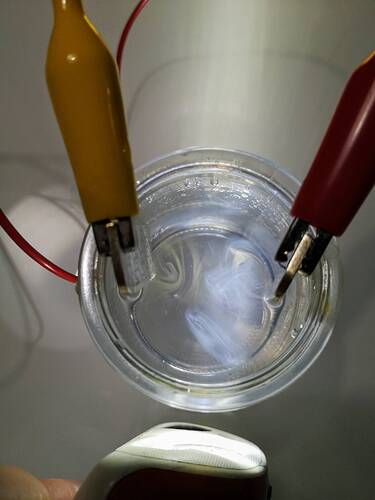 30 mins later looking like this and done enough for me. 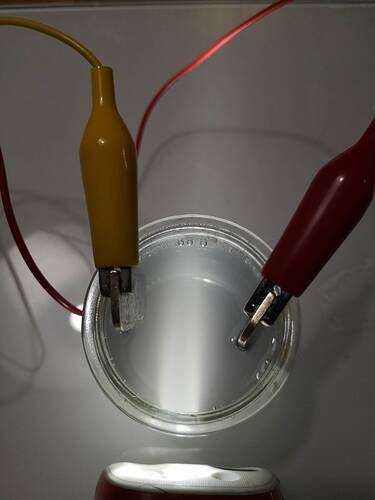 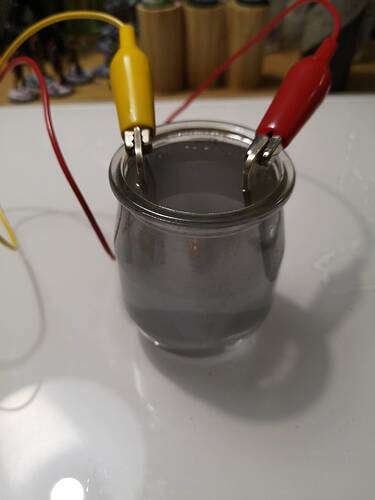 at this point if you let it sit overnight any heavys would settle out and the color would start to change into that familiar yellow spectrum.

But by a suggestion from @Hydrlizr he mentioned the used of a little bit of H202 with break down the bigger particles making it more ionic which also makes it go clear, this i didn’t know about but tried it on that last go around and seemed to work and the plants still made pollen with minimal spraying so just need to test it out fully.

but yeah a capful or two of H202 and it went from the first pic below to the second pic in about 30mins, then it went off into my spray bottle which is one of those h202 bottles shown below “dollar store $1.50ish” with the label removed and my own label put on it as not to mix it up.

The clarity of it is actually better than the last picture that i took just to show the effect and it just looked like water the next morning. 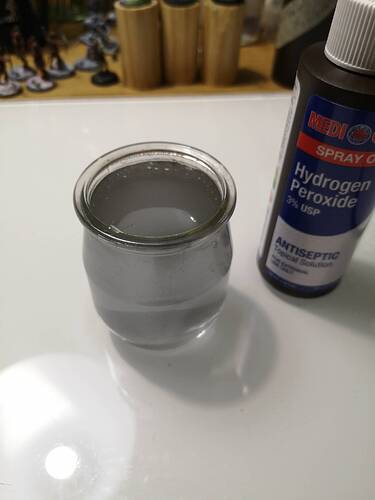 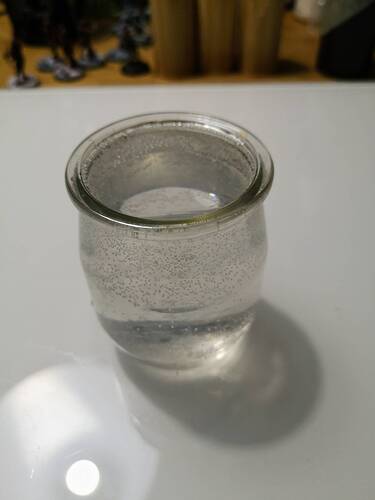 This is wonderful. Thank you for the work!

I also have the Megacrop Version 2 one-part and the new two-part and really prefer the 2-part. I’ve turned some plants around with that stuff. And like you said/showed, it’s cleaner. I think I actually prefer it over maxigro/bloom but haven’t had a lot of time to mess with it. Will be interesting to see your experiment ^^

Thank you for the CS write-up! Been debating between that or just buying the Twenty20 2-part STS spray

How much did the ounce of silver cost you?

well bought it years ago but at the time was like $24-26ish a bar, but looks like prices have gone up in the last year and is selling in the $36cnd range right now, just picked it up at a bullion currency place.

That`s good news.
Just made a batch, saving my sludge layer for peroxide.

Same half oz of silver glued to a cap that I bought in 2001.
Strongly recommend magnetic stirrer, so useful. 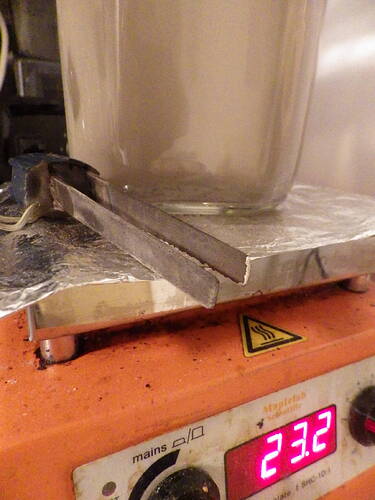 yeah ive considered a stirrer with a hot plate for a couple of uses, probably wouldn’t use it enough to warrant it taking up space somewhere though but eventually ill probably get one.

Great for mixing freeze dried berry powder and vitamin C, amazing for chocolate milk too.
So very very useful when you need it.
Vacuum distilled RSO/Rosin, cant wait to try that, just need to replace broken glassware (some day).

Well i wouldn’t say that as what is good is subjective to everyone individually as experience, means, tools and or learned abilities at hand to what one deems good enough dictates that.

We should achieve or do better in everyday things as a way of moving forward and building on what we are or have already done allowing us to progress personally, but we all have to watch out not to fall into that trap of “if we can’t be the best at that thing we shouldn’t even try” with bars that are so easily set high in our current information age as its so easy for all of us to compare ourselves to people who may have more experience, time or knowledge in a given subject.

Just of it, give some credit to yourself for what you have done so far and be proud of it and don’t let others dissuade you in that

shout it from the mountain tops !
I quoted this because it should be repeated often!
Well said and thanks for the reminder Mr.Sparkle

There growing still low humidity, back right plant on the left side cab doesn’t care though she’s been perky even when lights are out. The younger ones are having what seems like a tough start, they are setup on the auto waters now though just getting two little waterings a day, also removed the two weakest plants.

Other than that moving along. 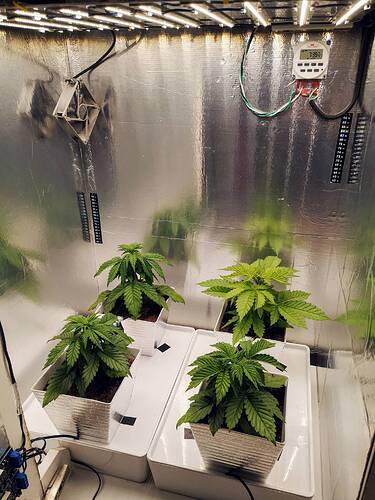 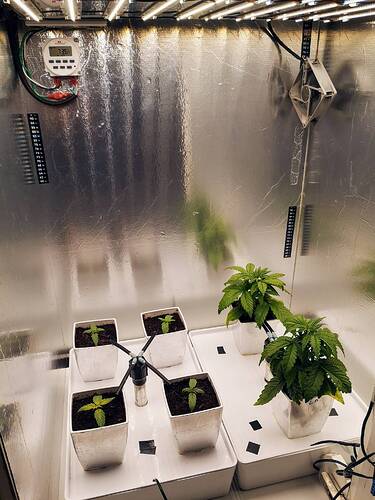 Upped the fan setting one point which is back to my normal setting just as it couldn’t hold the temp down around my setpoint but was running a couple degrees hotter. Little ones are looking a little rough for wear especially considering there age, definitely had an off start. Also tried picking up some of the same bigger square pots yesterday but the place i got them from previously didn’t have any, i was contemplating up-potting at least the non sprayed lemon pie.

That’s about it for my midweek update, oh also increased the amount of watering events a day so they are down to every 6hrs from every 8. 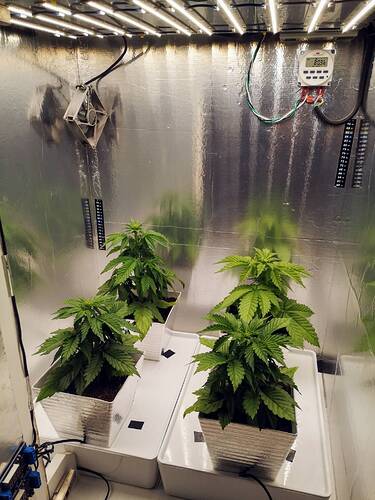 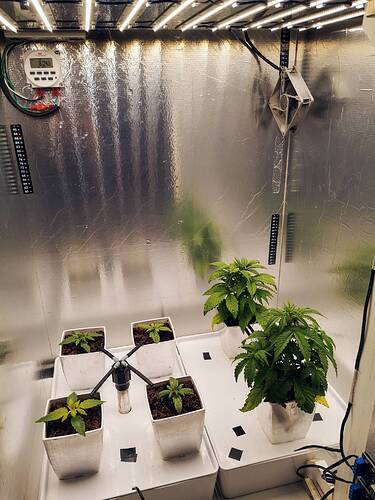 Looking good in there! The purple kush looks like they are growing somewhat alright lol

yeah well sorta definitely gonna say they ran into an issue of potentially too high pH as far as some of the initial waterings were concerned and i think that’s what caused the issues.

Contemplating taking the best two moving them over onto the other res eventually but starting some more seeds in the meantime.

Would of done my normal saturday morn update but been busy, as for the plants doing well now, ive been noticing the plants have been stressed out and drooping later in the day and taking a look over them they were pointing to light toxicity again, anyways turned them down and spent time yesterday re-going over popular knowledge of recommended light levels, taking measurements at various distances and power levels in my environment, and equating that out to my longer 18/6 days due to autos and how that all relates.

Anyways needless to say math wise and measurement wise looks like ive been stressing them from too much light, also the last couple of days where they have been running at reduce light levels go figure they have been looking happer. So we will see back down to the wattages i coincidentally previous roughly calculated as in 20-25w/sqft for my application and light to plant distance. 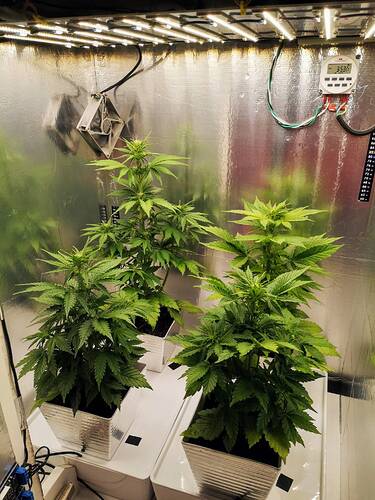 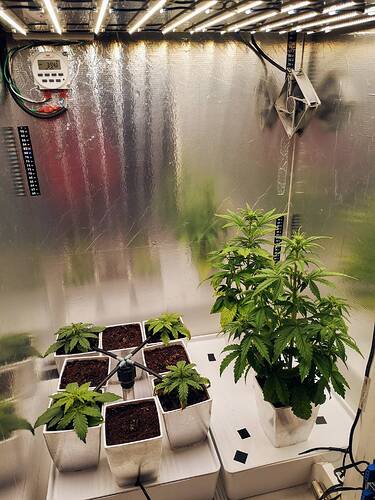 Also was looking at roots the other day just to see whats up but took these shots to share were at 3weeks in.

First one is one of the smaller square pots doing well. 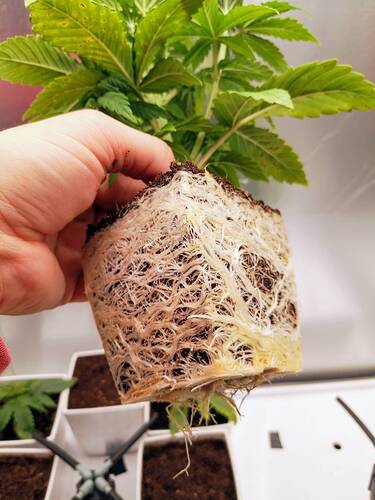 This was one of the bigger pots, but it was wetter than i would of liked at where it was before its next watering. 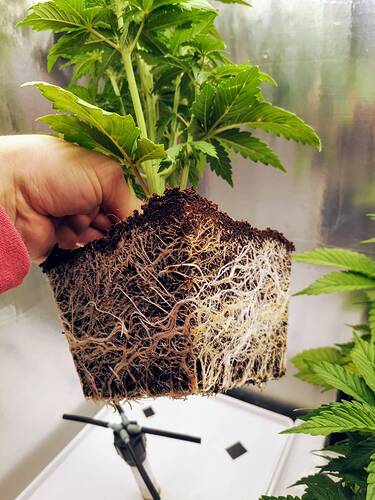 This is another bigger pot showing this one was doing better and was less wet, but still dialed it back a little to adjust for the wetter ones 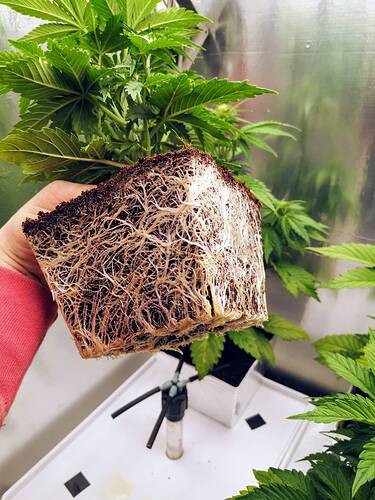 And one of the reasons why i was busy… Well ended up making a third chamber that will be used as an overflow/starting/pollen/ or efficiency chamber, ended up using scrap wood from some shelves i just ripped out of our bathroom closet as im in the tail end of renovating all that, started later wednesday night cause of some unintended motivation from @ReikoX and ill say im now more or less done, just have to make a simple carbon filter and then decide on what im doing as far as reservoirs goes which my normal ikea kuggis containers do fit, but you cant remove it if say it has water in it cause it needs to be tilted to get into the space so may still use one or look for another option in the meantime. 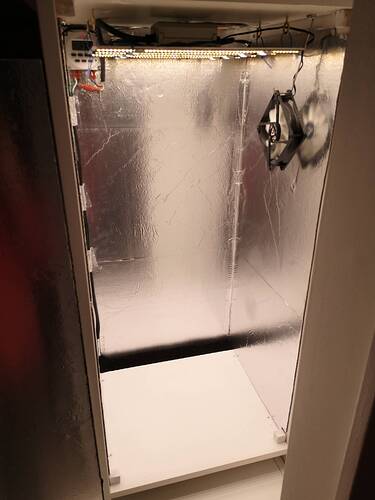 Oh @Grease_Monkey those are 4 more of your Purple kushes, that will be having there day 0 starting tomorrow, they just popped out of the soil a couple hrs ago, these ones definitely should be a better start, will not being blasted by as much light.