It is said that Mango is friend of cannabis smokers, now we know why …

β-Myrcene is a monoterpene, and for a wide variety of reasons, one of the most important terpenes. It is a precursor in the formation of other terpenes, as well. β-Myrcene is found fresh mango fruit, hops, bay leaves, eucalyptus, lemongrass and many other plants. β-Myrcene is known to be anti-tumor, anti-inflammatory, and used in the treatment of spasms. It is also used to treat insomnia, and pain. It also has some very special properties, including lowering the resistance across the blood to brain barrier, allowing itself and many other chemicals to cross the barrier easier and more quickly. In the case of cannabinoids, like THC, it allows it to take effect more quickly. More uniquely still, β-Myrcene has been shown to increase the maximum saturation level of the CB1 receptor, allowing for a greater maximum psychoactive effect. For most people, the consumption of a fresh mango, 45 minutes before inhaling cannabis, will result in a faster onset of psycho activity and greater intensity. β-Myrcene can be used in this same manner to improve uptake with a wide variety of chemical compounds. 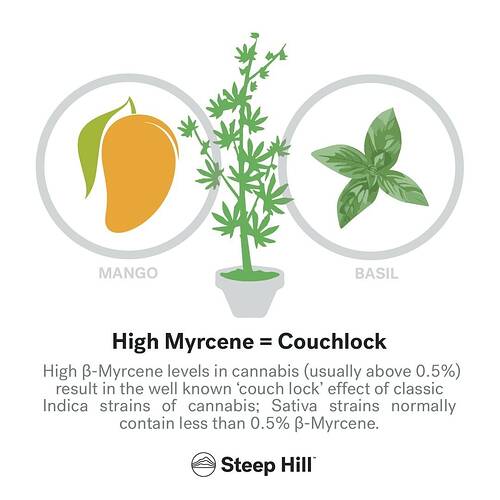 very interesting read. im not a fan of steephill. i seen them post something about the entourage effect and ive told steephill bout them using the term entourage effect for cannabis but they dont know how to google what entourage meansXD its funny when i see “smart people” saying stupid shitXD all you gotta do is type in entourage and youll see thats its a tv show… lmfao or that it means a group of people surrounding a famous or popular person.

Back when I drank super hopped up IPAs, one of my favorites was the Myrcenary Double IPA from Odell Brewing. It’s got a wonderful flavor if you enjoy the bitterness of hops…