Am i the only one that gets “members” asking me about why i use these lights, and how they just got this LED board that works awesome and then sends you a PM on what their prices are for the lights they sell?

Is there any way to flag solicitors? I feel that for the OG community with all the newcomers it could be bad for them that there are people putting out information that isnt proven results.

I’ve had 3 people rag on me about LED lights and then try to sell them to me… I know that LED is a option but these individuals are not building community or putting out info for people to learn and expand off of, they are putting out info to hustle product.

I personally have never had that type of communication on any subject. Maybe it only happens to people who’ve posted about their LED’s, but since I don’t use them (yet

Is there any way to flag solicitors?

You can flag anyone/anything that you think is questionable.
Flagging posts/PMs is certainly helpful in maintaining OG.

Awesome thank you, the sharks are out there.

Nothing ever sent to me

I get some pretty passionate arguments about my HID lights but when i ask for pictures it stops pretty fast. I’m fishing now see if i get a side by side test going and put it to rest but they always have the you need V2.1.3.4 its good to have a community we can work together and show results instead of charts and graphs

I agree here fully. I like LED and have only used HID twice. Everything I do is small scale though so it’s a bit of a different ballpark.

I’d love to see clones in a HID/LED comparison.

HLG r-spec would be the version I think would perform best, but any version would make for a solid showing at 30 watts per square foot.

As @Calyxander already said, you can flag message in private topic the same way as you flag post in public topics.

What are Flags and how do they work? Community

Flagging is powerful moderation tool for you - users. If you want to raise an issue about a post without derailing the topic at hand, the best course of action is usually to flag it. This feature is intended to dissuade bad behavior and spam, as well as to promote civilized discussion on Overgrow. After flagging post, system will notify Moderators and if needed will take an action automatically (e.g. post will be hidden - see details below). [image] By default, clicking the flag button (below…

We have strict rules for Advertisers / Sponsors. They are allowed to post exclusively in #sponsored category. In other sections, they can post commercial information only when they are tagged (using @) or asked directly.

Under no circumstances we would allow Sponsors to use private messages to send undesired offers.

No, it is asking for auto seeds not LEDs

That’s the price to pay for having a good reputation …

Edit: Now we have Mod bots …

I’ll be honest, it breaks my heart to say no right now. But I haven’t been growing since January. Let alone a seed run…

I keep as jewels half of the seeds you kindly sent me, as the others were beautiful plants but ended devoured by spider mites

No, just the system not that lets mods and leaders know things like: if a high number of ignores happens suddenly, it lets us know.

The part it messes up is “1000 year perma bans” for typing to fast cuz it thinks your a bot… however, it tells us that it did it and we can soon right the issue

Edit: @George1961 did it seriously delete a post? link me so I can see the context if you would please

Correct approach (if you need to quote) is to quote only minimal part of the post which you are reacting to. 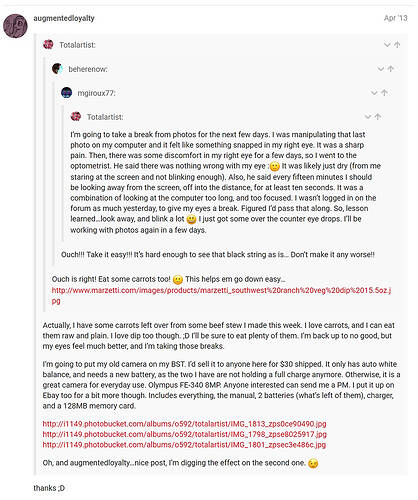 That System is tougher than the International Monetary Fund, deleting just two miserable lines won’t save much, we will end prisoners of bots

, this is a really high tech forum …

The part it messes up is “1000 year perma bans” for typing to fast cuz it thinks your a bot… however, it tells us that it did it and we can soon right the issue

Good to know, sometimes text takes a long time to appear after being typed and I managed to type it first in the notepad and then copy/paste it, I could be banned for that!

Good to know, sometimes text takes a long time to appear after being typed and I managed to type it first in the notepad and then copy/paste it, I could be banned for that!

Nah, I copy/paste most of my posts from evernote.

Don’t be afraid, this doesn’t apply to members tl2 and regulars tl3…

Nah… not afraid… just noticing if a new member “types too fast” they get banned by the system, I get that there is a balance and it’s trying to take out text bots and such… but still lol

I got a message like that the other day about a post…thought it was cool to know.